The Alsberg Walk to the Vlooyberg Tower 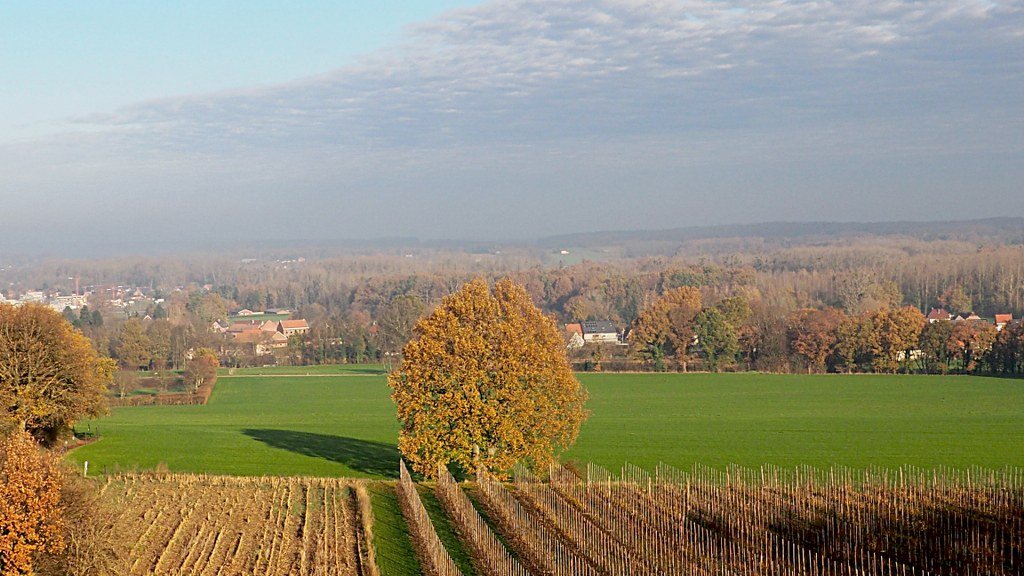 A pleasant 6.5 km walk in the Hageland of Flemish Brabant province, taking in the remarkable Vlooyberg Tower.

The Alsberg Walk is ideal for a couple of hours in the fresh air. It includes a remarkable tower, some outstanding views, a delightful wood, an ancient chapel, and a meeting with a Saint.

It’s an easy walk, suitable for children, although parts of it are unsuitable for buggies. There is one stretch from node 201 that goes along the Oude Leuvensebaan, but it’s not too busy. The path through the forest of the Walenbos is especially pretty.

This is the first point of interest, which you will see rising up in front of you after node 204. I’ve covered this in a separate post: The Vlooyberg Tower. Basically it’s an 11-meter-high “floating staircase” that you can walk up and get outstanding views over the surrounding countryside.

A word of warning. On a warm, dry and sunny Sunday afternoon the tower can be a very popular place to visit. You may have to wait in a queue to climb the staircase. Unfortunately, if you are wondering what distant villages and objects you are looking at, there’s no plaque or panel at the top of the staircase to help you. However, just down the road, between nodes 202 and 201, help is at hand. There is a helpful panel to identify points of interest on the horizon.

At node 201 you will come across the St. Donatus Chapel. Donatus of Münstereifel was a Roman soldier who lived around 140-180 AD. He belongs to the so-called “catacomb saints”, meaning that very little is known historically about them, but they appear in a lot of local legends. According to one of these legends, Donatus belonged to the Legio fulminatrix (the Lightning Legion). For this reason, Donatus is depicted with a bundle of arrows, consisting of lightning bolts, in his hand. He is therefore revered as a protector against thunderstorms and lightning strikes. Which means that this chapel is probably the safest place to hide should a thunderstorm arise on your walk!

Soon after leaving the Oude Leuvensebaan you will come into the prettiest part of the route as it wends its way through the Walenbos. This is a beautiful mixed woodland of oak, birch, beech, rowan, sycamore, hazel, and alder buckthorn. What’s more, it’s described as the largest alder wood in Flanders.

Depending on the season, some of the paths may be a little muddy, especially where forestry machinery has made ruts. But in general the paths are easy to follow. As you enter the wood from the west there is an attractive hut where you could picnic.

And over on the other side, as you leave the Walenbos, there’s another nice picnic table.

I did the Alsberg Walk with Liz and Suzanna, our youngest daughter, who also gave the walk a big thumbs-up.

After leaving the Walenbos you walk along some pretty country lanes back to your starting point. The lack of leaves on the trees at this time of the year shows up the infestations of mistletoe very clearly.

The final point of interest on this Alsberg Walk is the picturesque, single-aisled St. Martin’s Church in the village of Optielt. It’s built using iron sandstone from the region. Parts of it are over 300 years old. Part of the west facade date back to 1716; a lintel has been dated back to 1734. However, the first stones of a church here were placed around 1600. You can see that more recent renovations have been made over the years, to create a bit of a patchwork.

So there you have it. An ideal country walk for a couple of hours in the fresh air. A remarkable tower, outstanding views, a delightful wood. And I’m sure you’ll see other things that I missed. Any questions and just drop me a line.

9 thoughts on “The Alsberg Walk to the Vlooyberg Tower”