Annevoie Gardens: Water everywhere, and no pump in sight 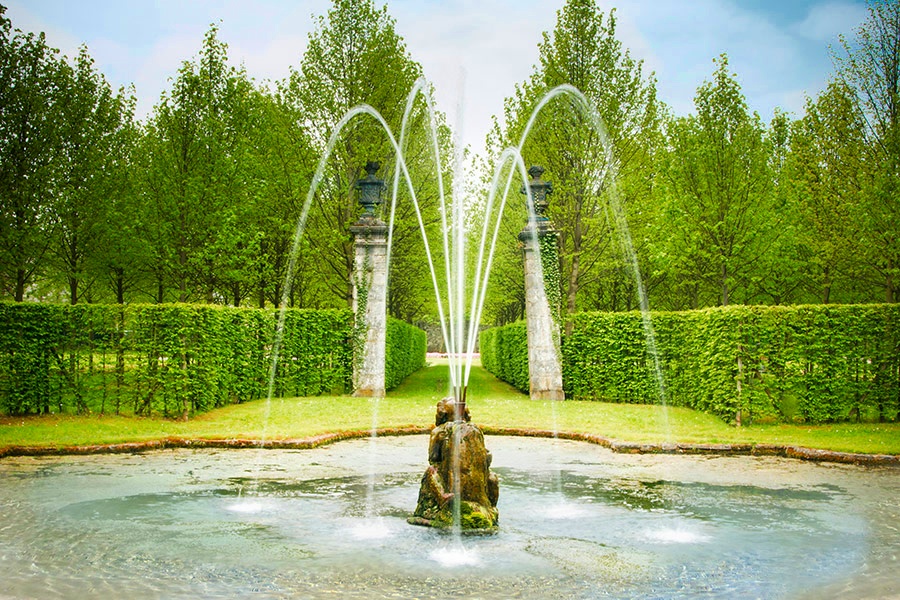 Discover the inventive beauty of Annevoie water gardens, plus a couple of nearby castles and an abbey.

My first thought on entering Annevoie Gardens was “I wonder how many electric water pumps are used here?” You’d probably ask the same question. The gardens are filled with fountains, jets and cascades, which surely — you would think — need numerous heavy-duty, submersible electric pumps? However, to my surprise, I discovered that everything works entirely naturally, without any mechanical or electrical intervention.

The gardens’ designer, Charles-Alexis de Montpellier, a local iron merchant, clearly knew what he was doing when he started creating Annevoie Gardens in 1758. His first task was to dig a 400-metre-long canal at the highest point of his 28-hectare grounds, and fill it with water from the nearby Fonteny spring.

After that he constructed a complex network of interconnecting underground channels running from the canal. It was then a “simple” matter of excavating about twenty pools and ponds and adorning them with over fifty fountains, cascades and waterfalls. It took him nearly twenty years to finish, but by 1776 Annevoie Gardens was complete, and has remained functional ever since.

And that’s no exaggeration — the water has been flowing non-stop for 240 years and continues throughout the year, even in the rare occurrence of a dry Belgian summer.

The water features are certainly impressive. Le Grand Cracheur is a 7-metre-high water jet. Le Gros Bouillon is a fan-shaped waterfall that was ground-breaking for the 18th century. And le Buffet d’eau is a cascade of water steps unique in Belgium.

Once de Montpellier had got the water system up and running, he turned his attention to the gardens. He instructed his gardeners to lay them out in a strict French style with straight lines and perfectly symmetrical patterns and designs. Over the years, his successors favoured Italian and English styles. Now it is a charming mix of all three. It’s fascinating to work out which style has been used in each area. Compare, for example, the mathematical precision of La Cascade Francaise with the wild randomness of La Cascade Anglaise alongside it.

It’s a garden full of surprises. Hornbeam hedges lead you to more than one trompe-l’oiel and numerous unexpected nooks and crannies. Grottos are furnished with statues of the four seasons, Neptune and Triton. A stone wild boar even adorns the centre of one pond. Everywhere the sound of babbling water creates a most relaxing atmosphere.

In between the water features are the flower gardens. The rose garden has been recently replanted with roses from the Val-de-Marne rose nursery, while the raspberry orchard is accessible during the picking season to provide some delicious mouthfuls for young and old.

I was personally delighted to see a number of meadows left for wild flowers, while some of the rock gardens were full of verdant growths of mosses, lichens and ferns. Consequently, the gardens are extremely wildlife-friendly. Blackcaps and garden warblers sing from the undergrowth; woodpeckers and jays can frequently be seen and heard; I spotted frogs and newts in some of the quieter waters. Kingfishers have been seen on the canal. Three pairs of nesting black swans add a touch of exotic glamour.

It’s a great place for children. They can run around and play hide and seek, and there is also a children’s playground with original hand-made wooden equipment. Close to the canal is a small menagerie with peacocks, deer, donkeys, ponies and sheep. The Orangery offers a fine selection of snacks, with a first-floor terrace overlooking the garden.

Annevoie Gardens are located on the west bank of the River Meuse between Namur and Dinant. It’s open from April to November. A leaflet in English is available, while guided tours for groups are also possible in various languages. Due to COVID-19, advance booking is required.

ALSO IN THE AREA

To make a day of it, also worth visiting nearby are the following:

Citadel, Dinant — Spectacular views over Dinant, the River Meuse and the surrounding countryside are guaranteed from this cliff fortification. It is reached by climbing more than 400 steps or by taking a cable car.

Maredsous Abbey – Admire one of the most beautiful abbeys in Belgium. Visit the St. Joseph Centre to stock up on locally produced cheese and beer. Tour the pottery workshops. And enjoy a simple lunch there.

Veves Castle, Celles — This medieval castle is small, but picturesque. It houses an extensive range of 18th century furniture and a rare collection of porcelain.

To get new posts on interesting places to visit in Belgium, just add your email below:

59 thoughts on “Annevoie Gardens: Water everywhere, and no pump in sight”