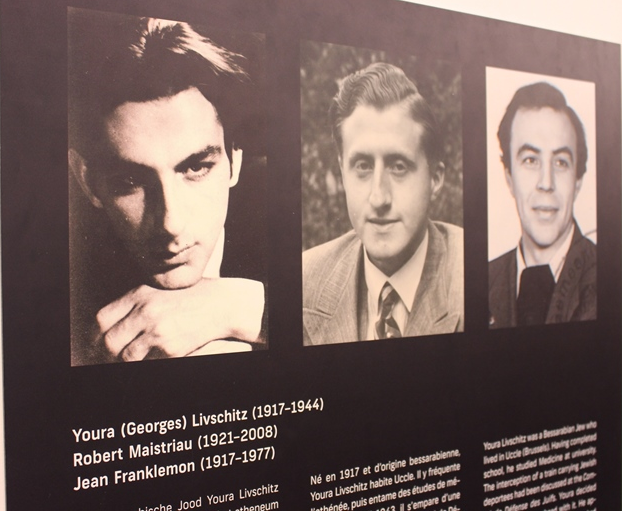 The Flemish village of Boortmeerbeek is notable for being the only place in Europe where a train transport of Jews was stopped by resistance fighters.

On April 19, 1943, a train pulled out of Dossin Barracks in Mechelen, Belgium. It was called Transport XX (20). It was holding 1,631 Jews. The ages of the people crammed into these cattle trucks ranged greatly. Suzanne Kaminsky was a six-week-old baby. Jacob Blom was 91 years of age. Their destination was the Nazi concentration camp in Auschwitz.

Such trains were commonly seen and heard leaving Mechelen on their way to Poland. In 1940, nearly 90,000 Jews were living in Belgium. Between the summer of 1942 and the summer of 1944, over 25,000 of these people were transported by 28 trains from the transit camp in the Dossin Barracks, Mechelen to eastern Europe.

Transport XX set off from Mechelen on the line to Leuven. Between the villages of Boortmeerbeek and Haacht, the train driver noticed a red light ahead, the sign of danger. The driver slammed on his brakes. But there was no danger. It was a daring action performed by three young members of the Belgian Resistance Movement: Jewish doctor Youra Livchitz and two non-Jewish accomplices Robert Maistriau and Jean Franklemon. Dr Livchitz flagged down the train using a lantern covered with red paper. While the train was stationary, Maistriau and Franklemon managed to cut through the barbed wire securing the sliding doors of one of the wagons.

That was all they could do. They only had one revolver between them, and the train was guarded by one officer and 40 men from the Sicherheitspolizei in Germany. After a short gun battle, the train re-started. But one of the wagons was open! 17 people dared to flee. They were given money to take the tram from Haacht to Brussels to get there safely.

17 may not seem many, but the resistance movement had further actions up their sleeve. Understanding that the Jews were facing a terrible fate, they had prepared an escape plan. They had managed to hide saws and files and other tools in the straw of some of the wagons of Transport XX. This enabled the occupants to open some of the train wagons from the inside.

Over the next hour, a further 219 people jumped from the wagons of Transport XX and fled into the darkness. This action is a unique fact in the history of the Holocaust. Nowhere else in occupied Europe was such an action undertaken on a transport of Jews.

Of the 236 people who escaped, 91 of them were recaptured and put on the next transport to Auchwitz. 25 were killed either while escaping or shortly afterwards. 120 succeeded in their bid for freedom.

After this attack on Transport XX, the security on transport trains was reinforced with soldiers from Brussels. They would travel along with the train, until the German border.

April 19 1943 was also very symbolic because the uprising in the ghetto of Warsaw started on the very same day.

One boy who jumped to freedom that night was 11-year-old Simon Gronowski. In 2013 he told the BBC his story. It makes fascinating reading. He described the atrocious conditions in the wagon. “We were packed like a herd of cattle. We had only one bucket for 50 people. There was no food, no water. There were no seats so we either sat or lay down on the floor. I was in the rear right corner of the car, with my mother. It was very dark.”

The Belgian Jewish Defense Committee was formed in 1942. It created fake IDs and hid about 4,000 children and 10,000 adults with non-Jewish families or religious groups. Halting Transport XX bound for Auschwitz was one of their more daring acts. They also tried to sabotage the German war machine by setting fire to factories and derailing trains. Belgian resistance fighters also attacked offices containing names and addresses of Jews in Belgium, setting fire to papers used by the Gestapo to round up individuals. Some of the Belgian railway staff were also working for the resistance. Survivors testify that they had the impression that train drivers sometimes wanted to make it easier to flee. They often slowed the train in favorable or pre-arranged places.

What happened to the the three brave resistance fighters who stopped the XX Transport?

I did not know anything about this heroic action until I happened to stop at a railway crossing in Boortmeerbeek while cycling locally. I saw this unusual street name — XXste Konvooistraat — 20th Transport Street.

On closer inspection, below the street name was this explanation of the street name. I had never heard of this event before, so when I got home I checked out the story.

The Flemish village of Boortmeerbeek is notable for being the only place in Europe where a train transport of Jews was stopped by resistance fighters.

The Kazerne Dossin Museum remembers the ordeals of the persecution of Jews and gypsies in Belgium. It also looks at the broader aspects of the Holocaust. It considers the group pressure and collective violence that has resulted in mass murder and genocide.

The restored Memorial reopened on January 27th 2020. It is a solemn place to remember the thousands of people who waited here in fear and desperation before being loaded onto the transportation trains heading to Auchwitz and other concentration camps. Photographs and videos paint a picture of Jewish life in Belgium before the war.

Kazerne Dossin digitizes original documents about the Holocaust in Belgium and collects them in an image bank. Currently it contains more than 1.5 million documents. The most important component of this image bank includes the many portraits of deportees from the Dossin Kazerne. All of these portraits are displayed on the museum’s portrait wall. Also visible are the lists of people transported in each of the transports leaving Kazerne Dossin. You can search the Digital Image Bank.

There are two YouTube videos I can recommend if you want more details of what happened on April 19 1943. This one is 55 minutes long and tells the whole story, including the remarkable experiences of some of the survivors from Transport XX.

My attention was also drawn by my blogging friend Guido to the opera Push, by Howard Moody. It’s inspired by the true story of Simon Gronowski who I mention above. Simon was pushed off the Transport XX train by his mother.

Especially for the 77th anniversary of Transport XX, Moody brought together 150 singers from Belgium and the UK willing to sing the “grand finale” to the opera. Naturally, being lockdown, the singers recorded separately at home. But thanks to the wonders of technology, that virtual choir has been forged into one whole. Watch and listen to the amazing result here:

Latest news on Push the Opera

On Sunday October 3 2021 Push will be performed in Boortmeerbeek, where Simon Gronowski fled to safety, nine days before his 90th birthday. This was covered in an article in The Guardian.

If you would like to read more stories explaining the history of Belgium, drop your email below and you will get new posts straight into your inbox. You can always contact me for more information too.