Armistice Day 1918 … What Happened Next? 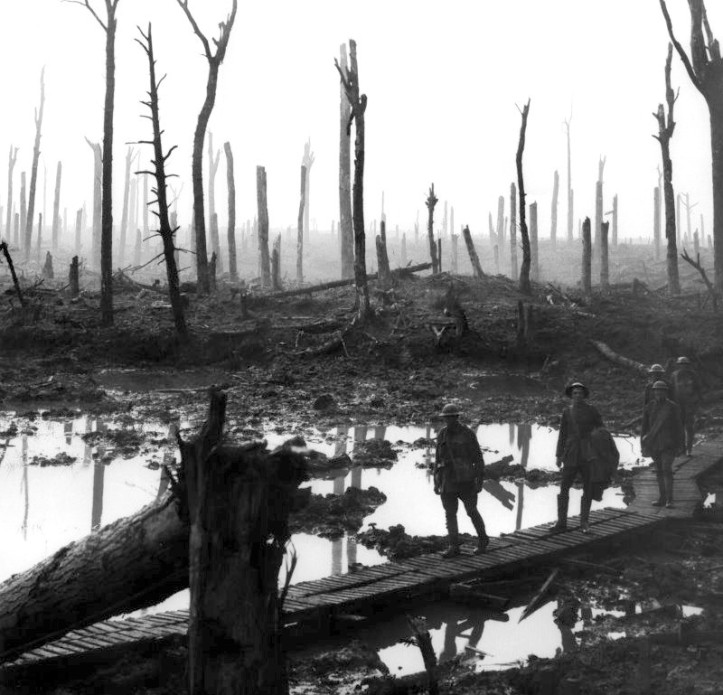 For thousands of Belgian people, Armistice Day 1918 marked the beginning of another grim struggle that was to last for decades.

Armistice Day 1918 marked the end of the First World War. It’s easy to think of the relief and optimism sweeping across Europe that the signing of the peace treaty must have brought. Perhaps we have visions of people returning to their homes in previously occupied territories, greeting loved ones, restocking the shops, and getting “back to normal”. Or we imagine citizens and soldiers dancing in the streets of villages and towns, to the pealing of church bells.

But for thousands of Flemish people returning to Flanders Fields, the reality was totally different – and brutal. For them, there were no bells pealing from village churches. There was no dancing in the streets. There was no restocking of shop shelves.

There was absolutely nothing remaining of the land they used to know.

For most of the First World War, Allied and German forces were involved in trench warfare along the Western Front. This bloody battlefield stretched from the North Sea to the Swiss frontier with France. Despite the efforts of both sides, it remained essentially unchanged for the duration of the war.

In Flanders the Front Line extended from Nieuwpoort on the coast, along the banks of the previously picturesque River Ijzer, past Diksmuide, around the medieval town of Ieper, and past Mesen to the French border. Its width varied between two and ten kilometres. On a clear day, a Belgian soldier would have been able to stand in relative safety behind the Front Line and see the German army moving in relative peace on the other side.

The land in between, however, was a monstrous hell of death and destruction. In this long, narrow stretch of West Flanders, more than half a million soldiers were killed, wounded or missing. Tens of thousands of civilians were forced to flee for their lives. Towns, villages, farms, woods and fields were totally devastated.

When peace was finally restored on 11 November 1918, virtually nothing was left of the original landscape. The area became known as the Verwoeste Gewesten — the Devastated Lands. What happened next and how the landscape was restored to its previous state is a remarkable story of the perseverance and opportunism of the Flemish people.

After the Armistice, two action plans were hastily formulated and implemented. The first was to retrieve, identify if possible, and bury the bodies of the soldiers who had died on the front. Many of these had lain unburied for years and all clues to their identity had been lost. Others had been buried in temporary graves. These were exhumed and laid to rest in permanent cemeteries.

The second task was to level the ground. The British Army’s Chinese Labour Corps played a key role in this work. Initially shipped over from China to dig trenches and latrines and provide other support to the fighting soldiers, they stayed in Flanders after 1918 to help clean up the war zone. They did not return to China until 1920. German prisoners of war were also used. Trenches, craters and shell holes were filled in and at some point it was declared that civilians could be allowed to re-enter the war zone. They were told to expect the worst.

It would have been an extremely traumatic return — a nightmare scenario. One farmer returned to his farm, found absolutely nothing recognisable, and committed suicide. Another man from Ieper couldn’t find a trace of his farm until he found a tap to an underground water pipe that he had installed in 1914. It was the only thing remaining of his property.

Their first priority was to build temporary accommodation, and the resourcefulness and ingenuity of the Flemings came to the fore. Scattered around the battlefields were huge dumps of wood and scrap iron. Using such materials, basic huts and sheds were constructed.

Other families took over abandoned Nissen huts. These were prefabricated, portable multi-purpose huts developed by Major Peter Nissen of the Royal Engineers in 1916. At least 100,000 of them were produced in World War One as temporary barracks for soldiers. The Belgian government also provided their people with temporary wooden huts.

The availability of clean drinking water was a problem. The River Ijzer and the two lakes that provided water to Ieper were totally contaminated and unfit to drink. Local breweries came to the rescue. They drilled deep bore holes and pumped up clean water. They used it for their own brewing processes and to provide potable water to local inhabitants.

The next task was to re-develop and re-stock the land. This was necessary not only in the war zone itself but up to ten kilometres on either side. One of the reasons was the extensive use of chlorine, phosgene and mustard gases in the region. These poisonous gases were not only fatal to humans but killed everything living in their path, including livestock as well as vegetation. The Belgian Ministry of Agriculture provided new seeds and plants, while farmers in the Netherlands — particularly from the province of Limburg — donated cattle, horses and even chickens. Slowly but surely, new life began to return to the Devastated Lands.

However, working in Flanders Fields in the early 1920s was a dangerous occupation. It has been estimated that a quarter of the one billion projectiles fired during the First World War failed to explode, but remained live. That’s 250 million projectiles. Farm labourers were constantly being maimed or killed by unexploded ordinance. It was apparent that the initial clean-up operation had been too superficial.

Around this time some clever opportunists appeared on the scene. They would perform a service of “deep digging”. For a fee they would thoroughly dig out a hectare of land, remove all the shells, and proclaim it as clean land. A number of family fortunes were made in this way.

Also amassing great personal wealth were the scrap metal merchants who went from battlefield to battlefield collecting shells and selling the iron and copper. Both jobs were fraught with danger and frequently led to workers losing limbs, if not their lives.

With the land beginning to yield its first crops and livestock increasing in numbers, farm buildings could be rebuilt. Often the same architect would be commissioned for a number of farms and he would use the same design.

Unbelievably, the so-called Period of Reconstruction of the Verwoeste Gewesten lasted until 1967, when the final annex to the Cloth Hall in Ypres was finished.

Unfortunately, it’s not quite the end of the trauma. Each year, nearly 300 tons of rusting bombs, grenades, mortars and shells are unearthed. About one in 20 contains poison gases that are still potent enough to kill. The locals call it the “Iron Harvest”.

In 2014, two people were killed in Flanders by a century-old unexploded shell.

Despite all the efforts, the legacy of this horrendous episode in European history still remains in Flanders Fields.