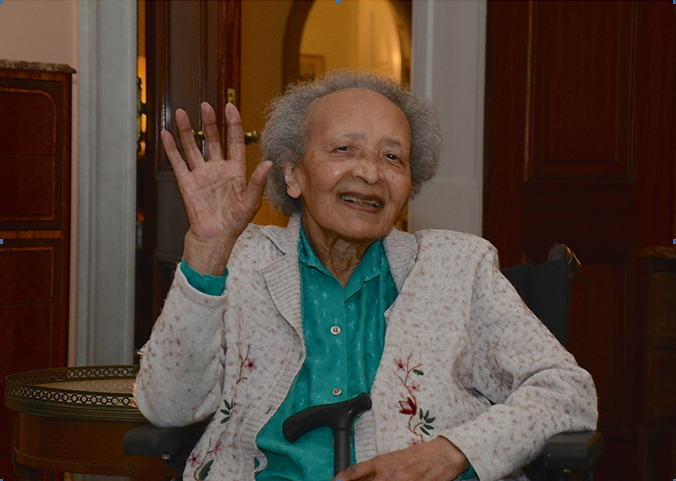 Augusta Chiwy was a nurse from Belgian Congo who displayed great courage and compassion during the Battle of the Bulge in World War II. Her remarkable story didn’t come to light until 2007.

On June 6, 1921 in the village of Mubavu in the Belgian Congo (now part of Burundi), a baby girl was born and given the name Augusta Marie Chiwy. The name of her mother, a Congolese woman, is unrecorded. Her father Henri Chiwy was a Belgian veterinarian. Augusta was one of thousands of biracial children fathered by Belgian men working in Africa during Belgium’s colonial era. When Augusta was nine years old, her father returned to his hometown of Bastogne in Belgium, and brought his daughter with him.

In Bastogne, Augusta was cared for by her father and his sister, whom Augusta called “Mama Caroline.” She attended a Catholic boarding school near her home where she was described as bright, ambitious and popular. She was also petite, measuring just 152 cm. At the age of 19 Augusta decided she wanted to become a nurse and began attending a nursing college in Leuven. She qualified as a nurse in 1943, and started working at the St. Elizabeth Hospital in Leuven.

The Battle of the Bulge

In December 1944 Augusta’s life took a dramatic change in direction. Her father invited her to return home to Bastogne to celebrate Christmas. She accepted, and after a difficult journey eventually arrived in Bastogne on December 16. The timing could not have been worse. On that day, the German army launched a surprise attack on the Allies’ front line in Belgium. The focal point of the German attack was Bastogne. Two days after arriving home, her village was surrounded by the German army and under constant bombardment.

The Siege of Bastogne within the Battle of the Bulge became known as one of the bloodiest battles of the Second World War. Conditions were terrible. The winter of 1944 was one of the coldest in recent times, and the American soldiers were poorly equipped and outnumbered. The Germans demanded that the U.S. troops surrender. But the Americans knew that holding Bastogne was critical to thwarting the German offensive and they were determined to fight. As for the locals, those that had not taken the opportunity to flee crowded into the cellar beneath the local Catholic school. Augusta volunteered to help care for the people there.

Also in Bastogne at that time was U.S. Army doctor Captain Jack Prior of the 20th Armored Infantry Battalion. The 27-year old Prior – only recently graduated from medical school – had set up a military aid station in Bastogne to care for wounded soldiers. However, he had practically no medical equipment or medicines, and only one other medical officer – a dentist from Ohio.

Prior heard about a nurse helping out in the school, went to see her, and asked her to help out in his aid station. Communication was difficult. Prior spoke little French; Augusta little English. But Augusta agreed to help Prior in his makeshift hospital. What she did understand was that in doing so she was putting her life at risk. If the Germans captured Bastogne, she would probably be executed for having aided the Americans.

For the next month, Augusta Chiwy cared for the wounded U.S. GIs. Unfortunately she experienced racism as some soldiers from the deep south objected to being touched by her. She worked side by side with Prior under horrendous conditions. The had few surgical instruments, no anesthesia, and very little pain relief medication. German shelling had also left Bastogne without electricity or running water.

But they persevered to offer the help they could. They would venture into the battlefield with two litter-bearers to return with the wounded. They performed amputations with a large army knife and with Cognac to dull the patient’s pain.

On Christmas Eve the German Luftwaffe dropped a 500 pound bomb and scored a direct hit on the aid station. Dozens of wounded GIs were killed instantly. Augusta was in a building next door to the aid station when the bomb struck. She was blown through a wall, but miraculously sustained only minor injuries. The soldiers who survived the bombing were moved to a second hospital and Augusta began taking care of them there. Prior and Augusta continued to work side by side, saving lives, and supporting and comforting each other.

The lifting of the siege

Eventually, on December 27, the U.S. Third Army under General George Patton routed the Germans and ended the siege of Bastogne. Caption Jack Prior and the 20th Armored Infantry Battalion moved on, eventually returning to the States. Augusta was left with what we now call Post Traumatic Stress Disorder. For decades she was quiet and withdrawn, sometimes going for weeks without speaking.

In 1950 Augusta Chiwy married Belgian soldier Jacques Cornet and the couple had two children: Alain and Christine. Eventually they would enjoy five grandchildren and six great-grandchildren. In 1965 Augusta finally felt able to resume her nursing career. No-one working alongside her had any idea of what she had done and been through in Bastogne. However, Jack Prior did not forget. He wrote to her, and until 2007 when Prior died, they regularly exchanged letters and small gifts.

The story comes out

But Augusta’s story was not to be kept secret. In October 2007 Augusta, now aged 86, was living in a care home in Brussels. She had a visitor. It was military historian Martin King who had heard rumors of a Belgian nurse in Bastogne in 1944 and was keen to discover her story. Over the next few months, Augusta delved deep into her memories and told King all about what had happened in Bastogne.

Through King’s published work, Augusta Chiwy came into the limelight for the first time. On June 24, 2011, she was made a Knight in the Order of the Crown by King Albert II of Belgium. Six months later she received the U.S. Army’s Civilian Award for Humanitarian Service. On March 21, 2014 Augusta was recognized by her hometown as a Bastogne Citizen of Honor.

After being forgotten for decades, Augusta Chiwy’s courage, compassion and service to humanity had finally been recognized.