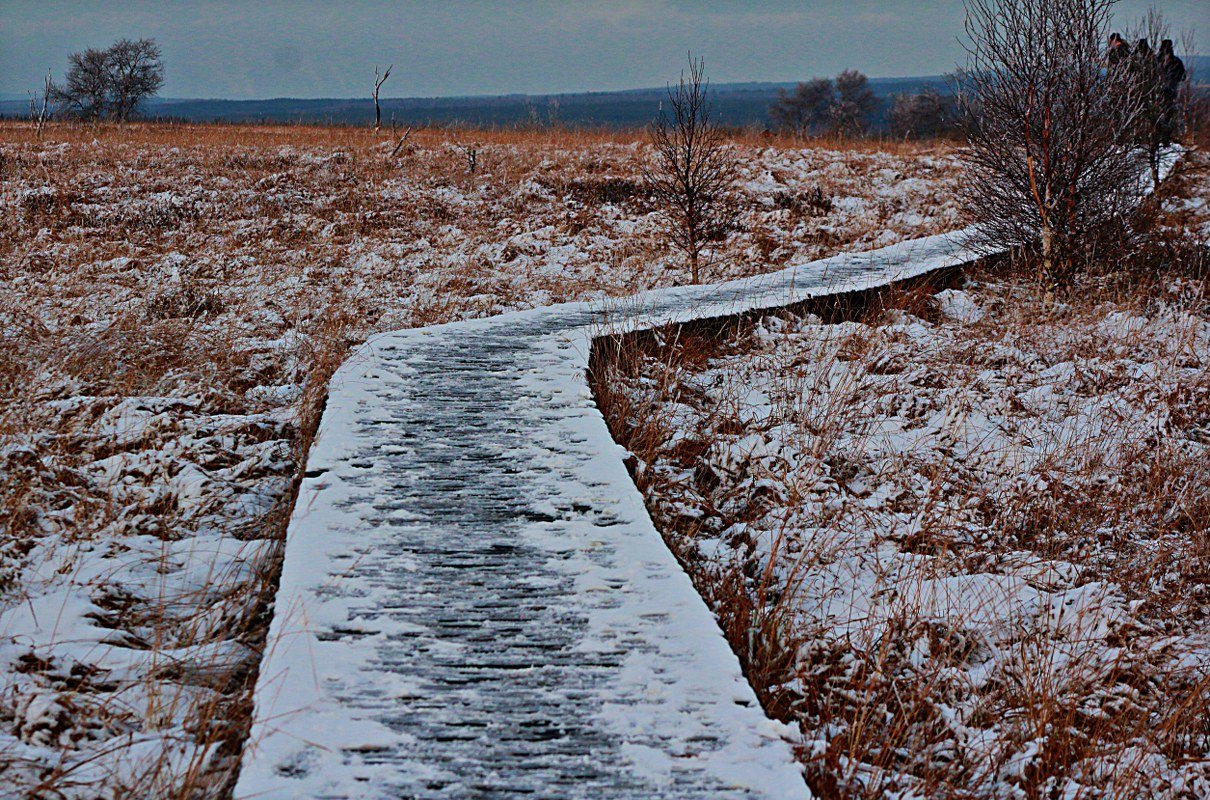 Enjoy a short 5 km or a longer 9 km walk from Baraque Michel, one of the highest spots of Belgium and a beautiful area at all times of the year.

The Baraque Michel is a café/restaurant located 675 metres above sea level in the Hautes Fagnes (High Fens) of Belgium. It’s the third highest point in Belgium. A “baraque” is a shelter or cabin, and this is literally what Michel Schmitz built here in 1811: a tiny refuge for lost travellers. During thick fog he used to toll a bell, which must have saved a lot of lives as during a fog this boggy area can still be treacherous, even today. Over the years the hut has expanded in size. It was also used as a relay for mail coaches connecting the towns of Eupen and Malmedy. Now it’s a large complex offering food and accommodation. It’s also the main entrance to the High Fens Nature Reserve, and thus an ideal starting point for a hike in the area.

I’m giving you two walks starting from the Baraque Michel car park. By public transport, TEC bus 390 from Verviers stops there. The first is a 5 km walk. You might think 5 km isn’t far to walk, but a word of warning. This area can get extremely cold in winter. As it’s exposed, an icy easterly wind can make hiking difficult. The weather in this area can change very quickly. I remember hiking in the Hautes Fagnes when one minute it was bright sunshine and just five minutes later I was in the middle of a severe snow storm. Also, during these COVID-19 days, depending on when you go, the Baraque Michel café/restaurant may be closed, which means there’s nowhere to go for a warming cup of soup or hot chocolate drink. Don’t let all this put you off though. Go prepared, dress sensibly, take a hot drink with you, and you’ll have a great time.

For those of you who want something longer, I add a 9 km circular walk starting from Baraque Michel. Here too you’ll notice that it doesn’t extend too far from your starting point. So if you do get tired or chilled, it’s easy enough to take a short-cut back to the start.

A 5k walk from Baraque Michel

The map of the 5 km route is below. Click to enlarge, and download as a PDF. The GPX track is on my RouteYou page.

A 9k walk from Baraque Michel

Here is the map of the route which you can download as a PDF or get the GPX track from my RouteYou page.

This week, the first snow of the season fell in the Ardennes. Discovering Belgium’s roving reporter Herman Vandecauter was determined to be one of the first to see it. So he drove over to Baraque Michel for a short walk. Here is a small selection of his photos taken in the area around Baraque Michel.