The Belgian concession in Tianjin, China 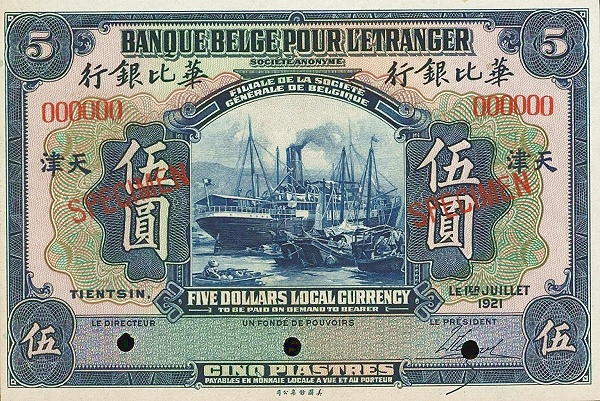 Did you know that Belgium once owned a bit of China? From 1902 to 1931, Belgium, like a number of other countries, had a concession in the Chinese port city of Tianjin.

Concessions were territories in China that were governed and occupied by foreign powers. They are frequently associated with colonialism and imperialism. They were basically enclaves inside key cities that became treaty ports. No concessions exist today; by 1943 they had all been dissolved.

The Belgian concession in Tianjin

On February 6, 1902, Maurice Joostens, the Belgian envoy in Beijing, and Minister Yao Shideng representing the Qing government, concluded an agreement for a perpetual concession of a site in Tien-Tsin (as Tianjin was then called) to Belgium. The Belgian concession was about 44 hectares (0.44 square kilometers) in size and was located on the Hai He River, an important transport route to the sea.

However, when compared with the concessions in Tianjin of other countries, the location of the Belgian concession was the least ideal. Although the Dazhigu area where the concession was located had good shipping conditions, it was remote from the old city of Tianjin.

The Belgian government invested little in the concession. As a result, the Belgian part of Tianjin did not bustle like other European-owned Chinese cities such as Hong Kong and Macau. Few buildings were built, most of which no longer exist. Even the Belgian consulate was in British territory.

Big in trams and electricity

What the Belgians did invest in were railways, electric power systems and tramways. In 1904, China and Belgium signed a contract granting the Compagnie de Tramways et d’Eclairage de Tientsin an official monopoly for 50 years over trams and electric lighting in the whole city.

In 1906 the first tram line was opened, making Tianjin the first Chinese city with a modern public transportation system. Shanghai, China’s largest city, had to wait until 1908 for electric trams.

The electricity supply and the tram business were very profitable ventures. Almost everything was supplied and maintained by Belgians. By 1912, the company had recovered its entire investment and was making substantial income. Every day, the company deposited the three incomes from its electric lights, trams, and electricity meters into the Huabei Bank and transferred the money to Belgium. It is said that the company was responsible for the Belgian government’s national education budget at the time.

By 1914, the tram network had crossed Tianjin city into the Austrian, French, Japanese, Italian and Russian concessions. (By the way, did you know that a Belgian missionary to China is credited as inventing the first car?)

The end of the Belgian concession in Tianjin

The duration of the concession was short-lived. With an impending financial crisis looming over the concession, in January 1927 the Belgian Minister to China announced that Belgium was willing to return the Tianjin Concession to China as a gesture of friendship.

On August 31, 1929, China and Belgium signed a charter for the return of the Tianjin-Belgium Concession. The administrative power of the concession and all the public properties of the concession were transferred to the Chinese government.

In March 1931, the handover ceremony was officially held, and the Belgian concession in Tianjin was changed to the Fourth District (Special District) of the Tianjin Special Administrative Region.

The end of the company

In 1943 the Compagnie de tramways et d’éclairage de Tientsin was taken over by the Japanese army. Members of the Belgian staff, often with their families, were sent to internment camps. Following the end of World War II, the Chinese authorities took over the network. Two more lines were built under Chinese administration, but the network was finally closed around 1972.

17 thoughts on “The Belgian concession in Tianjin, China”