Vote for the Belgian Tree of the Year 2022 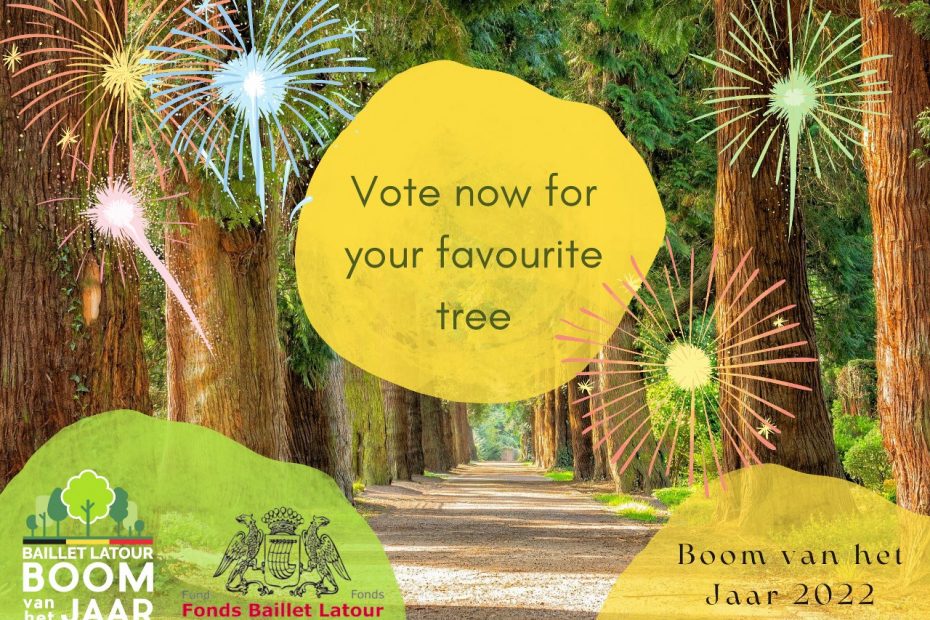 It’s time to give trees some love – and one in particular – by casting your vote for the Belgian Tree of the Year 2022.

“What on earth is the connection between Eurovision and trees?” you ask.

Good question. Aficionados of Eurovision will know that the entry from Belgium alternates between Flanders and Wallonia. In even-numbered years, the Flemish broadcaster VRT selects the entry. In odd-numbered years it’s the job of the French-speaking broadcaster RTBF. The same even-handed approach extends to the Belgian “Tree of the Year” competition. In 2022 it’s the turn of Flanders’ environmental organizations to coordinate the competition: “Boom van het Jaar” .

In 2021 Belgian’s “French-speaking” Tree of the Year was this Giant Sequoia of the Collège Notre Dame de Bonlieu. It therefore entered the 2022 European Tree of the Year competition. Impressive as it is, the sequoia ended up being sequestered – in 12th place. (Mind you, it still did better than the country’s Eurovision entry in 2022 which trailed in at 22nd). The winning European tree was this 400-year-old oak tree from Poland.

The aim of the initiative is to promote knowledge and interest in trees. And what a great idea! After all, there’s a multitude of very practical reasons to admire, revere and preserve trees. Trees produce oxygen, reduce carbon dioxide and absorb atmospheric pollution. Trees clean the soil by absorbing dangerous chemicals and other pollutants that have entered the soil. They muffle urban noise and reduce noise pollution. Trees reduce flash flooding, provide shade and cooling, act as windbreaks, and fight soil erosion. And I haven’t even started on the huge benefits for wildlife in terms of food and habitat.

So which trees are lining up to get your vote for the Belgian Tree of the Year 2022? There are six trees – one per Flemish province and one from Brussels.

The Silver Lime of Auderghem, Brussels

This Silver Lime (Tilia tomentosa) on the Maurane Roundabout in Auderghem is 24 meters high, has a circumference of 316 cm and is nearly 100 years old. It was planted in 1930 to commemorate 100 years of Belgian independence, following a tradition after the French Revolution in which lime trees were often planted to mark historical events. The tree filters the pollution around this busy roundabout and perfumes the whole neighbourhood. In July, the scent of its white flowers is very intense, making bystanders forget the smell of exhaust fumes.

This Common Pear (Pyrus communis) can be seen on the Guido Bilckepad in Klerken, which is a small village just outside Houthulst. It is 10 meters high, has a circumference of 200 cm and is 102 years old. It was planted in 1920 and is without a doubt part of Klerken’s cultural heritage. Its fruit used to be collected and sold to visitors of the local village fair, the Perelaarommegang. The pears had their own special name – Laupertjes – named after Saint Laurentius, the patron saint of the village church. There’s talk of reviving the tradition of the Perelaarommegang in Klerken. If so, this tree’s pears could once again end up in the hands and stomachs of visitors to the fair.

This Large-leaved Lime (Tilia platyphyllos) is 25 meters high, has a circumference of 555 cm and has an incredible age of 292 years old! It can be seen in all its glory alongside a cute little chapel on the Huldenbergstraat in Duisburg, which is part of Tervuren. It’s the perfect place for such an ancient tree: it’s at a crossroads of cobbled ancient roads dating back to Roman times. You can sit in its shade and wonder at the thousands of travellers and pilgrims who have sat in exactly the same place and have enjoyed the shade of this lovely lime tree.

The Pedunculate Oak of Lanaken, Limburg

Limburg’s entry in the Belgian Tree of the Year 2022 competition is this Pedunculate Oak (Quercus robur) that can be found at the former Center for Child Care and Family Support (CKG) Molenberg at 120 Daalbroekstraat, Lanaken. It is 31 meters high and its eight trunks make a total circumference of 830 cm. The site used to be a place where sick children could recuperate. I’m sure the pure oxygen produced by this magnificent oak tree aided their recovery.

The London Plane of Roosendael, Antwerp

This special tree can call itself the thickest single-stemmed London Plane (Platanus x hispanica) in Belgium. It can be found growing in the grounds of the Roosendael youth accommodation center in Sint-Katelijne-Waver, which is 5 km north of Mechelen. The tree stands on the former abbey site of Roosendael, a Cistercian abbey that was founded in the 13th century. The tree is 32.8 meters high, has a circumference of 769 cm and is 215 years old. The London Plane is a cross between two species from widely divergent parts of the globe: the American Sycamore (Platanus occidentalis)  and the Oriental Plane (Platanus orientalis). It gets its name because it was widely planted in London, as it was found to thrive in sooty air. Its ability to withstand air pollution, drought, and other adversities assures its popularity as an urban tree.

The final candidate, representing East Flanders, is this 35-meter-high Bald Cypress (Taxodium distichum). With a circumference of 470 cm and an age of 270 years, it’s an impressive ancient tree. It can be found in the courtyard of House Beaucarne at Beaucarnestraat 9 in Ename, which is part of Oudenaarde. Since the 1960s it’s been decorated by a flowering Wisteria, which now climbs the entire tree. The House was the residence of the prominent bourgeois Beaucarne family who settled there in the 18th century. The family became passionate about collecting plants. In the garden that belongs to the house, you can also find the Ponytail Palm (Beaucarnea recurvata) a plant from Mexico that was named after the family.

How to vote for Belgian Tree of the Year 2022

Made your choice? Head over to the Boom Van Het Jaar website, select the tree of your choice, and click on the green banner “Stem op uw favoriete boom”. You then have to tick the box “Ik ga ermee akkoord …” (I agree to the rules etc.), add your email, and confirm by clicking “Bevestig uw stem”. For some reason you have the opportunity to cast another vote for another of the six trees. But once I’d decided where to give my tree love, I couldn’t bring myself to share it with another!

Walk in some Belgian forests

If this has inspired you to get out and enjoy a walk in a forest in Belgium, here are some suggestions:

If you love ancient trees, or know someone who does, here are two beautiful book that I can highly recommend. Maybe a good idea for a birthday gift?

Ancient trees: Portraits of Time is the result of a 14-year quest by photographer Beth Moon to photograph ancient trees throughout the world. Her beautiful photos include 1000-year-old Yews in English churchyards; the baobabs of Madagascar, called “upside-down trees”; and the fantastical dragon’s-blood trees grow only on the island of Socotra.

Ancient Skies, Ancient Trees is by the same photographer. In this book she captures breathtaking images of the unpolluted night sky, framing constellations, nebulae, and the Milky Way together with some of the world’s ancient trees.

Disclosure: As an Amazon Associate I earn a small commission from these Amazon links.

I hope you enjoyed this post focusing on trees. Any questions, just drop me a line.