Bill Bryson, you are SO WRONG about Belgium 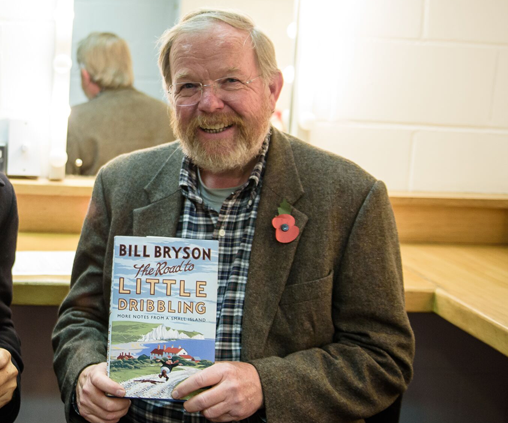 An open letter to travel writer Bill Bryson, in response to critical remarks he made about Belgium in one of his books.

Do you mind if I call you Bill? I feel as if I can, as I’ve read so many of your travel books over the years that I feel I know you quite well.

It started back in 1999 with your book A Walk in the Woods. That was soon followed by Neither Here Nor There, Notes From A Small Island, and Notes from a Big Country. I’ve always found you an entertaining, informative, knowledgeable, witty and insightful writer. If ever I was asked to compile a list of inspirational travel writers, you’d be up there at the top.

You see Bill, I recently read your book, The Road to Little Dribbling, and you’ve disappointed me. Greatly. You’ve changed your style. You are now quite a Grumpy Old Travel Writer, aren’t you! But you also made a couple of un-researched, throwaway remarks that I guess you thought would elicit a few chuckles.

When I read the first remark, I smiled like a priest, forgave you for your ignorance, and continued reading.

When I read the second remark, I banged the book shut, pounded up the stairs to my study and hammered “Bill Bryson travel writer email address” into Google.

I found millions of results. Heaps of admiring reviews. Extracts from your books. A Facebook page with 85,000 likes. Lists of your awards. Interviews in global newspapers.

But no email address.

Hence this open letter to you.

So what made me so angry Bill?

In The Road to Little Dribbling, you made two remarks about Belgium. (Surprising, considering the book’s subtitle is “Adventures of an American in Britain”. But you clearly had something to get off your chest.)

The first was not too hurtful. It actually started with a positive observation about the punctuality of trains in Belgium and the reliability of our train timetables! Really? That was surprising in itself, considering how many hours I’ve wasted waiting on Belgian platforms). But anyway, we’ll draw a line under that inaccuracy. You wrote that it is “one of the things that impresses me about Belgium” but then you added “and we are course dealing here with a very short list.”

Oh Bill! A very short list of impressive things about Belgium? I bit my tongue and read on. Still on the subject of trains, you wrote that:

“it is possible to travel from King’s Cross to Wymondham, though I wouldn’t actually recommend it as there is bugger all there.”

Well that’s a shame for the little English town of Wymondham. But then you wrote:

And there it was. In black on white, the blackest condemnation of the wonderfully rich, varied, interesting, fascinating and inspiring country of Belgium, where you say there is “bugger all.”

Bill, have you never visited Brussels or Antwerp?

Have you never stopped off for a day in Gent, Bruges, Leuven or Mechelen?

Did you not step into one of those punctual trains you found and take a trip into Wallonia to go walking in the Ardennes?

What a shame you didn’t head east into Limburg and go cycling!

Are you one of the few people who haven’t been moved by the powerful evocations of Flanders Fields?

And when you were in Belgium, did you not sample its excellent beers, chocolates, waffles, frites and other delicacies?

And we haven’t touched on the museums, the art & culture, the history, the carnivals, the sport, the nature …

But I think you might be getting the message.

So there’s bugger all in Belgium, is there Bill Bryson?

I think it’s about time you came over here again, don’t you?

Looking forward to your response!

I hope you have enjoyed this article. To get the latest posts from Discovering Belgium straight into your email inbox, simply add your email below. Thank you.

115 thoughts on “Bill Bryson, you are SO WRONG about Belgium”