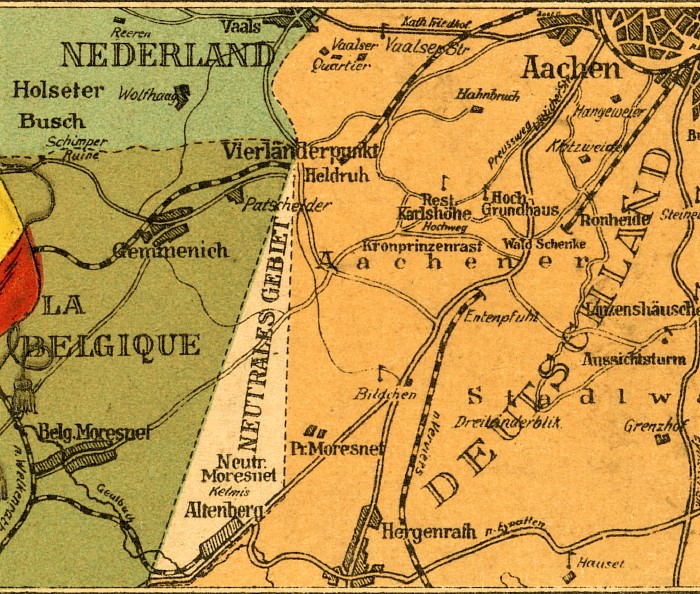 Neutral Moresnet is an unbelievable 100-year story. Here’s the history of this small patch of land in east Belgium.

100 years ago, in January 1920 (the 10th to be precise), Belgium received a piece of German territory as reparation for the damage that Belgium had suffered during the First World War. It covered the towns of Eupen and Malmedy and the surrounding area. Hidden away in the total package was a tiny patch of land — just 3Â½ square kilometers — called “The Undivided Territory of Neutral Moresnet.”

Tiny it may have been, but the history of this small triangle of land is one of the more bizarre stories in European history. To understand it, we have to go back over 200 years, to when it all began.

At the end of the Napoleonic wars, the ambassadors of the European states sat down together to redraw the map of Europe. Not surprisingly, it led to all sorts of arguments and disputes. For the purpose of this article, we’ll focus on just one particular sticking point: the small region of Moresnet in modern-day Belgium.

At that time, Moresnet was a sandwich between two great powers: the United Kingdom of the Netherlands, and Prussia. So small is this patch of land that you would think it could be easily been incorporated into one of these countries. But it was not to be. Both the Netherlands and Prussia were determined to have Moresnet within their borders. Neither was prepared to see the other walk away with it.

Why was Moresnet so popular? One simple, four-letter word.

Moresnet had what would be the envy of any land at that time: a highly profitable zinc mine. Zinc was in huge demand. It was vital for the production of brass; essential for all sorts of products from doorknobs to ammunition casings. And in the early 19th century there wasn’t a lot of the stuff kicking around. So whoever owned Moresnet had access to a strategically very important mineral resource — and one that was highly profitable!

WHAT HAPPENED TO MORESNET?

The result, after much squabbling, was … nothing! Moresnet existed in what was in effect no-man’s land. As it belonged to no nation, it became known as Neutral Moresnet. And the people who lived there became known as … The Neutrals!

As the years rolled by, the zinc mine of course continued to spew forth its booty. This meant that the directors of the company (the Vieille Montagne Zinc Mining Company) who owned the mine and sold the zinc were becoming very, very rich. Especially because Neutral Moresnet — as it was not under the legal jurisdiction of any country — was essentially a tax-free zone.

Moreover, The Neutrals couldn’t be conscripted into an army. Neutral Moresnet didn’t have one! The neighboring countries had no legal basis to make a Neutral join their national army.

In fact, Neutral Moresnet only had one single law enforcement officer — and he didn’t have a jail or even a cell where he could lock someone up. News of this spread around Europe.

Within the first ten years of its existence, the population of Neutral Moresnet doubled. Young men wishing to avoid conscription found their way there. Smugglers enjoyed its status as a tax haven. Criminals being pursued by the authorities for their evil deeds fled there, because there were no extradition treaties. Gambling dens and brothels appeared, fleecing whoever had money to spare, and raking in sacks of cash.

In short, Neutral Moresnet could have been described in the same breath as Sodom and Gomorrah.

And on the whole, that’s how it remained through the decades to come. Even in the 1880s when the zinc mine dried up. The Vieille Montagne company merely imported zinc and set up a zinc smelting plant to make money.

Amidst all this, there is one person who deserves a mention.

Dr Molly was the chief medical doctor at Vieille Montagne. In 1885 he put forward plans to modernize this “mini-state” of Neutral Moresnet.

He established the Neutral Moresnet Independence Movement. He designed a flag. And he attempted to introduce his two favourite hobbies into the state.

Molly was an ardent philatelist. He was actually into stamps in such a big way that he designed and printed his own Neutral Moresnet postage stamps. Unfortunately the idea didn’t catch on and the stamps failed miserably.

Or did they? Dr Molly would surely have been delighted if he had known that these stamps would in later years become extremely rare, and extremely valuable!

What’s more, Dr Molly was an enthusiastic supporter of the man-made language Esperanto. He decided that Neutral Moresnet was to become the first Full Esperanto State in the world! Its name? Amikejo; ‘the place of friendship’.

He encouraged The Neutrals to learn Esperanto, which some of them did to quite a good extent. He gets Esperanto introduced into the curriculum of the local school. However, in the end, this idea went the same way as the stamps.

NEUTRAL MORESNET IN THE 20TH CENTURY

At the turn of the century, Europe was changing rapidly, and Neutral Moresnet was attempting to keep up with the times. A power plant is constructed. Public works projects are funded by the mine. A police force and fire brigade are established. It’s still a den of various iniquities though. In 1903 a huge casino is built there, which thrives for a while.

But then, disaster struck, not only for Neutral Moresnet but for the whole of Europe.

On 9 August 1914 Germany invaded Belgium and rolled into Neutral Moresnet without a shot being fired in anger. In just a few minutes, Germany achieved what the Netherlands and Prussia had failed to do after years of negotiations. They claimed this patch of land as their own. Neutral Moresnet no longer existed.

After Germany’s defeat and the Treaty of Versailes, the region once known as Neutral Moresnet was officially awarded to Belgium to become the municipality of Kelmis, and all The Neutrals received Belgian citizenship.

Add your email below to get more posts like this on the history of Belgium:

25 thoughts on “Neutral Moresnet: a bizarre but true story”