The bombing of Houffalize and its consequences 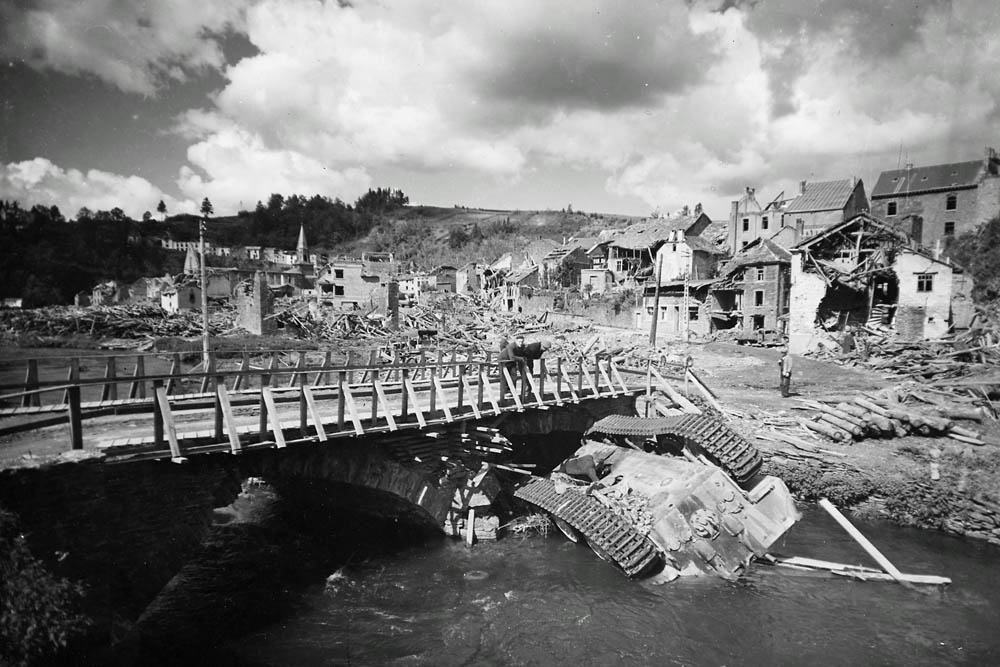 The bombing of Houffalize in the Belgian Ardennes was a key incident in the Battle of the Bulge during the Second World War.

In my previous post, on the Battle of the Bulge, you may have noticed the sentence: “Allied bombers intentionally turned the town of Houffalize to rubble to make it hard for the Germans to retreat.” The bombing of Houffalize was news to me, and I thought it deserved a bit more attention.

Nestling in the narrow valley of the River Ourthe in the Belgian Ardennes, the small town of Houffalize was a strategic location during the Battle of the Bulge of World War II. More specifically, it was the key crossroads for German supply columns and the escape route for German forces. Its two bridges over the Ourthe were still intact.

Between 20 December 1944 and 16 January 1945, German troops occupied the town of Houffalize, keeping the supply lines open and hindering the progress of the Allied troops. After weeks of low cloud and heavy snow, on 23 December the weather started to clear, and the Allies decided to counterattack. The objective was to paralyze all German movement by bombing Houffalize into what they called a “choking point.”

The first Allied planes appeared over Houffalize around nine o’clock in the morning of Sunday 24 December and were mainly aimed at taking out anti-aircraft guns. Civilians ceased their preparations for Christmas Eve and fled to their cellars. Much the same happened on Christmas Day, but this time Allied planes claimed the lives of two civilians. The first was hotelkeeper Charles Cawet.

The river’s on fire!

The first really heavy bombing raids shook the town on 26 December, when Allied bombers appeared in waves between mid-morning and late afternoon. They hit more flak installations, the station and several sections of town. Aircraft were now dropping incendiary bombs. The phosphorous fires were creating panic and devastation; even the River Ourthe was seen to be burning. On this day, 28 of the town’s citizens perished.

On 27 December the bombers returned. A local priest had barely made the rounds of the shelters when bombs began killing those he had just comforted and given general absolution. The home for the elderly caught fire, claiming two of Houffalize’s eldest citizens. The bombardment continued daily, and by New Year’s Eve, 42 villagers had been killed.

Many residents of Houffalize took shelter in the region’s thick-walled stone cellars, that had provided relative safety during the ground fighting. As the bombing continued, the Houffalois had to abandon some of the sturdiest cellars because the Germans were claiming the shelters themselves.

Others fled into the surrounding forests, but conditions here were terrible, with intense cold and half a metre of snow making survival difficult. Civilians on their way to the woods on the moonlight night of 31 December brushed past German soldiers who yelled “Houffalize! Stalingrad!”

Unfortunately, the worst was still to come. On the night of 5-6 January 1945, 90 RAF Lancaster bombers totally flattened the town. Altogether, 189 civilians from Houffalize lost their lives during the Allied bombing campaign.

By mid-January 1945 a lack of fuel forced the Germans to simply abandon their vehicles, which was fatal to Hitler’s ambition. On 25 January 1945 the Battle of the Bulge was over.

Shortly after the last Germans had surrendered, a group of American bomber pilots drove into Houffalize. They had come to see the results of their week-long bombing. They found nothing but the skeletons of buildings. “As an example of precision bombing, Houffalize stands as a tribute to the skill of our pilots and air crews. As a spectacle it is horrifying.” (Taken from “War Correspondent: Decreed Unfit for Service” by Michael Moynihan).

Reconstruction of the town

After the war, the houses in Houffalize were rebuilt, but it was a long and difficult process. The ruins and ground were littered with hundreds of unexploded munitions.

The town has a captured German Panzerkampfwagen V (Panther) tank on display. A bomb blast threw this 40-ton tank into the river, killing its crew. After the war the tank was pulled out and the crew members buried.

Aside from the historic interest of Houffalize, the town is well worth visiting and is an excellent base for exploring the Ardennes on foot.

For some interesting walks in the Houffalize area, check out these hiking routes on RouteYou. You could also visit the local Tourist Office. Houffalize is also known as the Belgian “Mountain-Bike Capital” as it hosts a round of the Belgian Mountain-Bike Challenge, described as “The Hardest Mountain-bike Tour in the Benelux!” Also, the Roc d’Ardenne is a 3-day MTB event in Houffalize.

This book is fascinating account of at the mysterious circumstances surrounding General Patton’s death. Was it an assassination?

And did you know that General Patton wrote a poem on his experiences in this place? Guess what tune it goes to!

Elsewhere on this blog you can discover more about the Battle of the Bulge. Check out the remarkable story of Belgian WW2 nurse Augusta Chiwy. And did you know about the Wereth Massacre?

To get more posts like this straight into your inbox, add your email below:

34 thoughts on “The bombing of Houffalize and its consequences”