Brussels Metro Stations: The stories behind their names 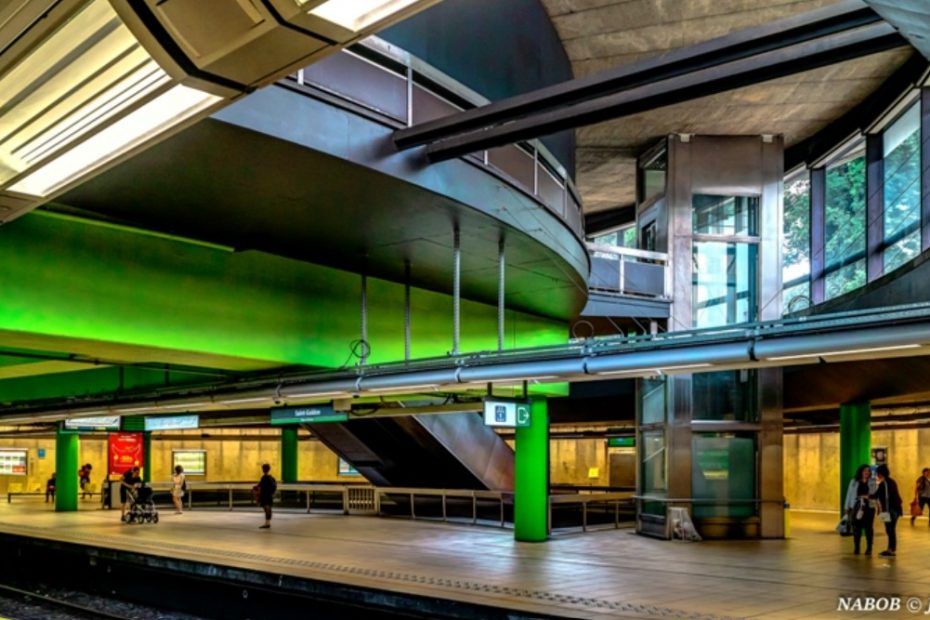 A short explanation of how 66 Brussels metro stations got their names.

Do you sometimes wonder what’s behind the names of the Brussels’ metro stations? Who is Herrmann-Debroux, Joséphine-Charlotte, or Georges Henri? What is a Maelbeek or a Pannenhuis? I’ve done some research to unveil the stories behind their names.

Albert I (1875-1934) was King of the Belgians from 23 December 1909 until his death in 1934. He is popularly referred to as the Knight King (Roi-Chevalier or Koning-Ridder) due to his role during World War I. He died while mountaineering in eastern Belgium.

Serving the Brussels Woluwe campus of the University of Louvain, it takes its name from the Place de l’Alma, the main square of the campus. Alma in Latin means “nourishing” or “fostering”.

Frans/François Anneessens (1660-1719) was dean of the Nation of St. Christopher, one of the Guilds of Brussels. He was beheaded on the Grand Place in Brussels because of his resistance to innovations in city government detrimental to the power of the guilds.

Takes its name from Rue d’Aumale/Aumalestraat, the street above ground. Possibly named after the French Duke of Aumale.

Takes its name from the nearby Avenue de Beaulieu; beaulieu meaning “a beautiful location.”

The name means “side of the stream” and refers to the Maalbeek stream that crossed the current metro line near the station.

The ship that carried the first Belgian polar expedition to the Antarctic in 1897. It’s also the Latin name of a large Roman province covering most of Northern Gaul.

Named after the French composer Georges Bizet (1838-1875) whose works were often performed in Brussels.

Emile Bockstael (1838-1920) was the last mayor of the municipality of Laeken.

The National Botanic Garden of Belgium, for which the area and station is named, was moved in the 1930s to Meise, but the name Le Botanique and the building complex located nearby is still used as a concert venue and cultural center.

Named after the Bourse, the Brussels Stock Exchange, which is nearby.

The nearby Food and Chemical Industries Education and Research Center.

A dynastic title that used to be given to a descendant of the King of the Belgians. After the death of Prince Karel in 1983, the title was no longer awarded and was abolished by Royal Decree in 2001.

Charles de Brouckère (1796-1860) was a Belgian nobleman and liberal politician. As Mayor of Brussels from 1848 to 1860 he was responsible for major urban renewal in the city, including the creation of water mains and the first boulevards.

Named after the triangular shape of the maintenance complex as seen from the air, which is reminiscent of the Greek capital letter Delta.

Gets its name from the avenue of the same name Avenue Diamant/Diamantlaan.

The five-times winner of the Tour de France. The station is decorated with objects commemorating Merckx, including one of his bicycles.

Elisabeth of Bavaria (1876-1965) was the Queen of the Belgians as the wife of King Albert I. She was the mother of King Leopold III of Belgium and of Queen Marie-José of Italy, and grandmother of Kings Baudouin and Albert II of Belgium, and Grand Duchess Joséphine-Charlotte of Luxembourg.

Named after the nearby Erasme/Erasmus Hospital in Anderlecht, which was in turn named after Renaissance humanist and theologian Desiderius Erasmus, who lived in Anderlecht in the 16th century.

Named after the “Black Ponds” that were located in this area.

Georges Henri Privat-Livemont (1861-1936) was an artist from Schaerbeek, best known for his Art Nouveau posters.

Robert Hankar (1892-1963) was the chairman of the board of directors of the firm EGIMO which developed the area.

Serves the Heysel/Heizel Plateau, famous for the King Baudouin Stadium (formerly known as the Heysel Stadium), the Atomium, Bruparck, Mini-Europe, Kinepolis etc. But I can’t find the origin of the word Heysel/Heizel. Anyone know? (Michel in the comments below says “meager meadows and hills”).

The Hôtel des Monnaies in Saint-Gilles was built in 1879. The national currency, the Belgian franc, was minted there in gold, silver and nickel.

Belgian singer, songwriter, actor and director (1929 -1978) who composed and performed literate, thoughtful, and theatrical songs that generated a large, devoted following, initially in Belgium and France, later throughout the world.

Located under the intersection of Rue de la Loi/Wetstraat and Avenue des Arts/Kunstlaan.

La Roue or Het Rad (which mean The Wheel) is a district of Anderlecht. Built in the 1920s, with its modest and picturesque houses, it offers a vision of an early 20th century working class neighborhood.

Charles Lemonnier (1860-1930) was a Belgian liberal politician and mayor of the City of Brussels.

Jean-Baptiste Madou (1796-1877) was a Belgian painter and lithographer.

Named after the Maelbeek/Maalbeek stream that runs through several municipalities in Brussels and is a tributary of the river Zenne. The name comes from the Dutch words beek (brook) and maal (to mill). There used to be 58 ponds along the stream; now only six are left.

Jean-Philippe-Eugène, Count de Mérode, 5th Marquess of Westerloo (1674-1732) was a Belgian soldier and Feldmarschall of the Holy Roman Empire.

Named after the roundabout above the station, which in turn was named after Field Marshal Montgomery (1887-1947).

Named after the Osseghem neighborhood in Molenbeek-Saint-Jean. The name is of Germanic origin and is composed of Odso + -inga + gem, meaning “residence of the people of Odso”.

Named after Pannenhuisstraat. This street is in turn named after a pub called the Pannenhuis which had a pannendak (tiled roof).

The main entrance is from the church square (parvis/voorplein) of Saint-Gilles/Sint-Gillis, from which it is named.

Major Arthur Pétillon (1855-1909) was a Belgian artillery officer who was active in the Congo Free State from 1890 to 1894. He returned to Belgium and became a councilor in Etterbeek.

The station is next to the 14th century Halle Gate, a medieval fortified city gate and the last vestige of the second walls of Brussels.

It takes its name from the ancient Namur Gate in Brussels’ old city walls.

The name refers to the Christyn de Ribaucourt family, an old family that has been part of the noble families of the Low Countries for at least 250 years.

It takes its name from the nearby Parc de Roodebeek. You might think “Rode” refers to red, which it might do here (the “red stream”). But it’s also a Middle Dutch word that indicated a piece of forest that had been cleared to be cultivated. The word itself originated from the Germanic verb ryddan, to remove, grub up, exterminate, or as we now say in English, “to get rid of.”

Saint Catherine of Alexandria is, according to tradition, a Christian saint and virgin, who was martyred in the early 4th century, aged 18, at the hands of the emperor Maxentius. Joan of Arc identified her as one of the saints who appeared to her and gave her counsel.

Named after the nearby Collegiate Church. Saint-Guidon/Sint-Guido (ca 950-1012) was a Catholic saint who is also venerated as a saint in the Orthodox Church. He was known as the Poor Man of Anderlecht.

No, nothing to do with the (differently spelled) classical composers Robert or Clara Schumann. Robert Schuman (1886-1963) was a Luxembourg-born French statesman, twice Prime Minister of France, and one of the founding fathers of the European Union. In 2021, Schuman was declared venerable by Pope Francis.

The station is located in Stokkel/Stockel Square. I have no idea of the etymology of the word, but the place has an excellent market on Tuesday, Friday and Saturday mornings!

Named after the Castle of Stuyvenberg, which is located close by in Laeken Park. It’s a residence of the Belgian Royal Family.

Edmond Thieffry (1892-1929) was a Belgian First World War air ace and aviation pioneer. He made, with Léopold Roger and Jef de Bruycker, the first successful flight between Belgium and Congo (then the Belgian Congo).

Located on the Place du Tomberg. Etymology unknown. Any suggestions?

Its name reflects the neighboring Place du Trône/Troonplein (“Throne Square”) which is overlooked by the Royal Palace of Brussels.

Emile Vandervelde (1866-1938) was a Belgian socialist politician. Nicknamed “the boss” (le patron), he was a leading figure in the Belgian Labour Party and in international socialism.

Named from the nearby Rue de Veeweyde/Veeweidestraat, which translates as “cow pasture”.

Named after the river in West Flanders which flows into the North Sea at Nieuwpoort. During the Battle of the Yser/Ijzer in the First World War, the sluices were opened, flooding the polder between Nieuwpoort and Diksmuide with seawater to provide an obstacle to the advancing German Army.

So there you are with an overview of the names of Brussels metro stations. If you disagree with any of these, or have an alternative suggestion, drop me a line or add a comment below. I haven’t quite included all Brussels’ metro stations in the list: a few are named after the railway station they serve (Central, Midi, Nord, West etc) which don’t need an explanation.

And if you think this discrepancy is because the metro was built in the more patriarchal 60s and 70s, think again. Out of 91 artworks currently on show in Brussels metro stations, only four display the work of women.

Thankfully, Ministers of the Brussels parliamentary majority have tabled a motion for a resolution aimed at feminising the names of bus stops, trams and metro stations. It includes a recommendation to name all future stations after women, in particular the stations on the new metro line 3 which will link Forest with Evere.

If this post proves interesting to readers, I’ll cover the names of metro stations in other cities of Belgium in future articles. Mind you, I don’t want to end up just giving lists of 19th century white males!

Who took the photographs?

They are super, aren’t they? They are all taken by Bob Anderson from Atlanta Georgia. Bob is an amateur photographer and lover of urban rail systems, aerial photography, night photography and cityscapes. He has travelled the world taking some great photos of metro stations. Visit Bob’s website to see more of his photos. Many thanks to Bob for granting me permission to use his photos here.

To get notification of new articles on Discovering Belgium, just add your email below:

24 thoughts on “Brussels Metro Stations: The stories behind their names”