Successful cranes and storks in Belgium 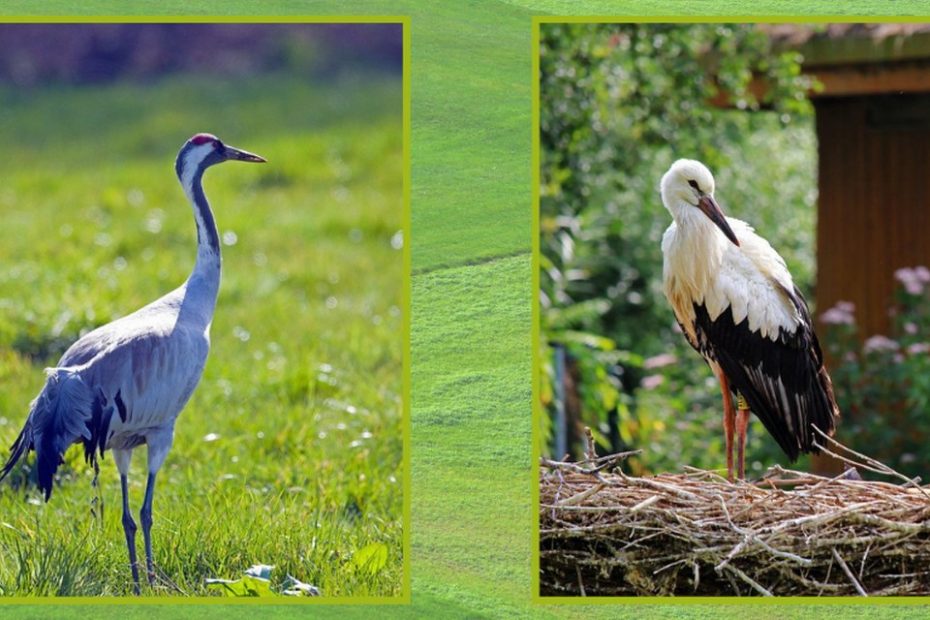 Amidst all the bad news about declining bird numbers, it’s encouraging to hear some good news, in this case about breeding cranes and storks in Belgium.

Last summer I shared with you the good news about a pair of cranes breeding in Belgium for the first time for decades, if not centuries. Two crane chicks, named Gru and Dru, successfully fledged in the Valley of the Zwarte Beek in the province of Limburg.

This was not a one-off exception! The same pair of cranes has returned to the same area and has nested again. This time they only have one chick, but it’s now three months old and seemingly doing well. One of last year’s chicks has also been seen in Veerle in the province of Antwerp.

About 20 white storks usually stay in the park for the whole year. This number is always boosted by migrating storks on their way from the south to the north. This year the numbers of storks hit an all-time high.

No fewer than 86 nests were counted in the park: 75 existing nests and 11 newly-made. The birds had 145 chicks, which is 34 up on last season. Two nests had as many as five chicks (two or three is normal).

It’s also proving a good year for white storks at Het Zwin nature park on the Belgian coast (which is an excellent place to visit). This year 16 nests are occupied, and the number of young is anticipated to exceed the normal 12-22 chicks that normally fledge from Het Zwin. You can check a livestream of the Het Zwin storks’ nests.

The breeding success of the storks and cranes in Belgium is probably due to the mild, dry Spring, with the absence of heavy rains or extreme storms.

However, Planckendael is an animal park, so young storks have to be careful where they are practising their flying lessons. The last place you want to end up in is in the lions’ enclosure.

On a happier note, did you know that you also get Black Storks? Check out this livestream of a black stork’s nest in Estonia.

Storks are particularly photogenic, especially on their nests. Do you have some great pictures of white storks in Belgium? Send one over and I will be happy to publish it below. The latest photos from a reader that I added to the blog were Andrew Wall’s photos of Siberian chipmunks in his garden in Brussels!

If you would like to get more posts like this on Discovering Belgium, add your email below. New posts will magically appear in your inbox:

8 thoughts on “Successful cranes and storks in Belgium”