A cycle tour through south Brussels 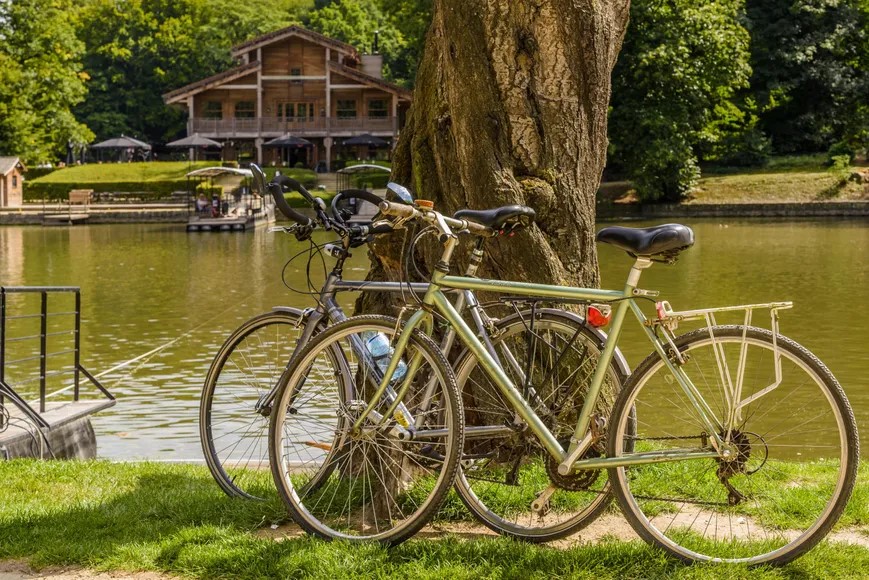 This 40k cycle tour through south Brussels – you could also walk it in stages – invites you to explore the capital city’s uphill and downhill roads.

I don’t often cover Brussels here, but this 40 km cycle route put together by Visit Brussels caught my eye. It covers the greener south of Brussels, visits some lovely parks, takes you through some of the posher parts of Uccle, passes through the Sonian Forest, and extends into real countryside around Hoeilaart and Sint-Genesius Rode. It’ll give you a bit of a workout though, as you’ll realize that Brussels is far from flat! However, on its hilly bits it will give you some great views over Brussels to the north, or into the surrounding countryside to the south. And on the downhill bits you’ll be able to freewheel and catch your breath.

It starts on the Boulevard du Triomphe opposite the Free University of Brussels. Below is the map of the route which you can download as a PDF. You can also get the map (along with the GPX track) directly from the VisitBrussels page on RouteYou. There you can also find more details of each of the points of interest. There’s a lot to see, so it’s worth taking your time and factoring in plenty of stop-offs to see them. In this post I just cover a few of the main sights.

Gardens of the Abbey of La Cambre

The gardens of the Abbey of La Cambre, a former Cistercian monastery founded in 1201, are a haven of peace just a short walk from the city’s main boulevards. These French-style gardens date back to the early 19th century. The Maelbeek stream originates in the small pond behind the abbey.

The Ixelles Ponds are probably the best known ponds in Brussels. Located between the Abbey of La Cambre and Flagey Square, there were originally four of them, and were used as fish ponds and to produce ice from the 19th century. At the end of the 19th century, the district was heavily urbanized and two of the four ponds were drained and filled in to form what are now known as Flagey Square and Place Sainte-Croix.

In 1866 Édouard Keilig was entrusted with the development of this English-style park as a social meeting spot, echoing Avenue Louise, which was completed around the same time. This 123-hectare park, a green lung in a highly urbanized area, is a sort of extension of the Sonian Forest towards the city center. It is has been classified as a Natura 2000 area since 2004. The Robinson chalet in the center, isolated on its own little island, adds a touch of romance. It was once home to a velodrome, which was inaugurated in 1893 but has since disappeared.

The urbanization of the Observatory district of Brussels took place between 1870 and 1914. Before then, the houses in this area were mainly holiday homes. The new Observatory of Belgium brings together astronomy, meteorology and, since 1964, aeronomy (the scientific study of the upper atmosphere) on one site. The first buildings erected around the main lawn were inspired by Italian Renaissance architecture. Some open days allow visitors to explore the site from the inside.

Take a short diversion from the route to visit this old cemetery, which has become one of the most unusual places to visit in Brussels. It has been disused since 1958. It’s quite a jungle, and seemingly haphazard, but you may come across the grave of the cartoonist Hergé and some unique Ashkenazi Jewish tombs. It certainly gives a glimpse into the final resting places of the wealthy bourgeois of Uccle. For more insights, read the article by Stefan in Springhill Stories.

This roundabout is home to an Art Deco building built in a star shape around the Saint Augustin Church, also in Art Deco style, located in the middle of the square. It was built in 1932-1935 and boasts a striking cross-shaped design. It was one of the first churches in Brussels to be built in concrete.

When the Western Roman Empire collapsed and the Roman roads fell into disrepair, our ancestors started to use waterways as transport routes. This is when the hamlet of Brussels on the River Senne around the island of Saint Géry came into being. Throughout the centuries, this small river has determined the development of the city. The Senne, which still flows above ground here, was vaulted when it entered Brussels in 1867 for hygienic and economic reasons.

This abbey, which dates back to the Middle Ages, forms the historic heart of the municipality of Forest, together with the town hall. It was founded in 1106 and owned a lot of land in and around Brussels. The site has been classified as a historical monument since 1994. The building has a troubled past. It was successively struck by the plague epidemics, by the religious wars in the 16th century, by a fire in 1764 and finally by the French Revolution which led to its dismantling in 1790. The site is currently being refurbished into a cultural center.

The old Nekkersgat mill, nestled in a green setting, is a typical example of 17th-century rural architecture in the Brabant region. The small rivers in the region were studded with mills, major industrial structures of our landscape until they were replaced by flour mills and other modern machinery in the 20th century. The Nekkersgat mill served as a flour mill, an oil mill and a paper mill. It ceased to operate after 1918 and the machinery was removed. In 1970, the municipality of Uccle saved it from demolition and turned it into an arts and crafts centre.

Another small diversion (about 200 m) takes you to very unusual mausoleum. It’s a circle of stone monoliths which commemorates the death of 11 foresters during the 1914-1918 war. Richard Viandier, a painter with a passion for the Sonian Forest, worked with the Water and Forest Administration and created several artworks and exhibitions on its behalf. He was inspired by the funeral rites of the Celtic tradition, and the ensemble takes the traditional form of a ‘Cromlech’. I have written a post about the Forester’s Memorial.

Little remains of what must have been a magnificent priory complex. However, originally it was a simple hermitage that was first mentioned in 1304. The dense forest provided an ideal shelter for spiritual retreats. It expanded over the years and was regularly visited by Charles V for hunting parties. The Groenendael Priory was demolished in 1784 by decree of Emperor Joseph II.

The Leybeek Ponds are former fish ponds in the park of the same name, which were created to mark the 1958 World Expo. The project was entrusted to René Péchère, a Belgian landscape architect known for the exterior design of the 1958 World Expo sites, the gardens of Mont des Arts, the garden of the Woluwe-Saint-Lambert town hall and the Botanique Park. The Leybeek Park was recently redesigned, in particular to promote the growth of vegetation around the ponds and to improve the water quality.

This small, peaceful park was created in the early 20th century as part of the construction of boulevard du Souverain. The park, and especially its pond, is home to many birds: moorhens, Egyptian geese, mallards, herons and many more. 16 types of bats have also made it their preferred hunting ground. Many trees in the park have been designated as ‘remarkable trees’ in the Brussels region.

This is one of the largest parks in the capital, covering an area of almost 69 hectares. Its history is closely linked to that of the creation of avenue de Tervueren as part of the 1897 World Expo. The exhibition took place on two sites (the Parc du Cinquantenaire and the Domaine Royal de Tervueren). These two sites had to be connected, so a landscaped park was designed along the avenue to embellish it and attract the capital’s bourgeoisie. The park is known for its wide variety of trees, some 180 different species in all.

So that’s your 40k cycle tour through south Brussels, including the route, a map, and a few interesting places to look at. If you make a day of it, there are plenty of picnic places in some of the parks I have mentioned. Let me know how you get on. Any questions? Just drop me a line. And to get new cycle routes and country walks straight into your inbox, add your email below:

7 thoughts on “A cycle tour through south Brussels”