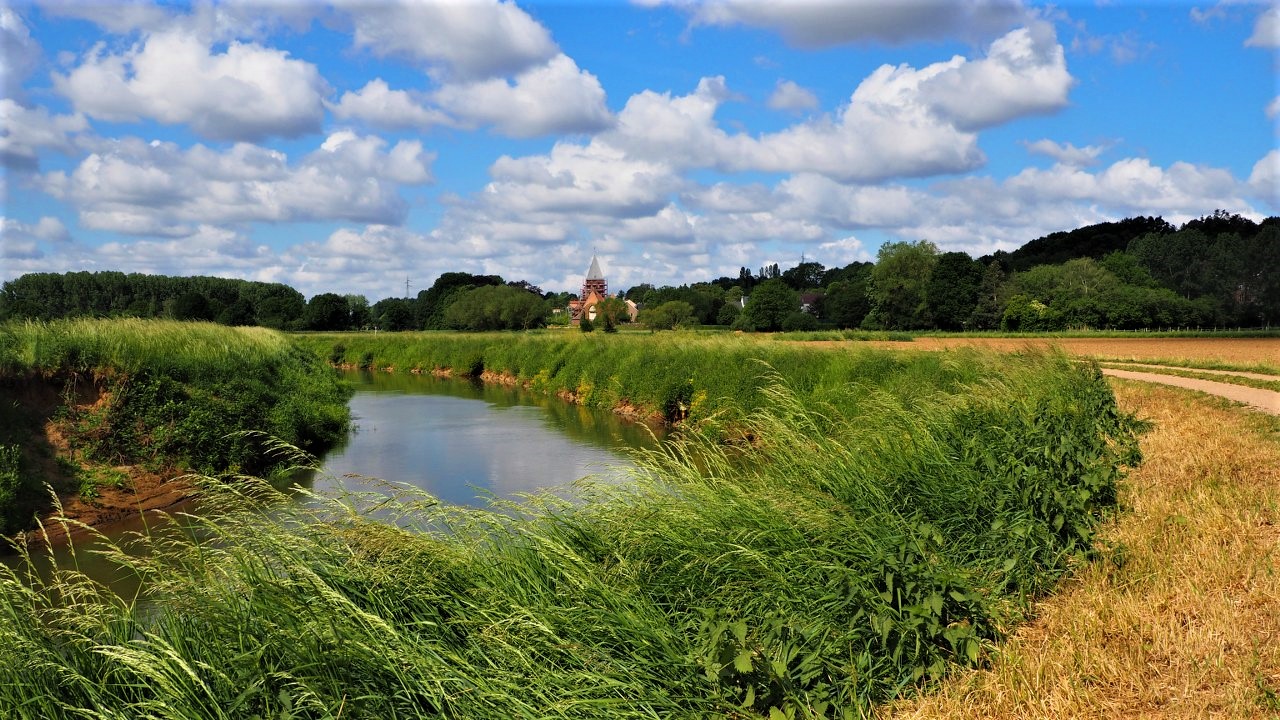 Choose from these two Demer Valley walks: A shorter 8k one or a longer 25k hike which takes a look at the famous basilica in Scherpenheuvel.

I’m proposing two walks along the Demer Valley in Flemish Brabant in this post. The main one is a 25 km hike from Langdorp through Testelt to Scherpenheuvel and back. A shorter, family-friendly 8 km walk starts at Testelt railway station and heads back to Langdorp station. Let’s start with the longer one first.

25k FROM LANGDORP TO SCHERPENHEUVEL (AND BACK)

Starting point for the 25 km walk along the Demer Valley is the village of Langdorp, a few kilometers to the east of Aarschot. Coronavirus lockdown restrictions still apply. So you can travel approx. 30 minutes to a place of exercise, and implement social distancing.

By train you can travel to Langdorp railway station. However, this requires another 1.2 km to walk to the starting point, and then the same trek back to the station. You may be fine with this. But if not, an alternative is to stay on the train until the next stop, Testelt, which is directly on the route. If you’re arriving by car, you can park next to the church at Langdorpsesteenweg 297, 3201 Langdorp. Below is an overview of the route. You can download this map and the GPX coordinates from my page on RouteYou.

The route starts from what is called the Demertrefplaats. There are five of these along the River Demer. They are meeting places where you can leave your bike or car to explore the region, or take a break on the way. At the Langdorp Demertrefplaats there’s a picnic table with a difference. It’s a meandering table of no less than 35 meters long. You can even light up your own barbecue here on one of the two public barbecue sets. Unfortunately, due to the coronavirus, the picnic table looked rather sad today as it was all taped up to keep picnickers at bay.

Also looking a bit sad and lonely was the nearby De Wolf Café. But during better times this will be a great place to visit for a meal during or after your walk.

But it was the river Demer I had come to visit, not the picnic table or the café, and it was certainly looking good on this beautiful sunny May day.

After a couple of kilometres the path leaves the Demer behind but stays in the valley. It really is a delightful country walk with great views over the fertile valley floor. A cuckoo was highly vocal!

LISTEN TO THE BIRDS!

Along the way the route goes through a couple of small wooded areas. Is there anything more uplifting to the soul than a deciduous woodland in May? Just stop for a moment, close your eyes and listen. Tune in to the birdsong. The more you listen, the more you’ll hear. It doesn’t matter if you can’t identify the birds you are hearing. Just marvel at the variety of sounds. For the record, I heard blackcap, wren, chiffchaff, song thrush, robin, chaffinch and goldcrest.

And then, just when I was about to set off again, not just one but two extra special birds! A golden oriole singing in the distance, and then a nightingale struck up from the nearby undergrowth. Marvellous! Here’s what to listen out for:

Then it’s back to civilization as I entered the tiny village of Testelt. It’s the alternative starting point of this route, which goes right alongside the railway line for a few hundred metres. Don’t worry though: it’s a very quiet track. Testelt is noted for its old watermill on the Demer.

THE BASILICA OF OUR LADY OF SCHERPENHEUVEL

After Testelt you follow a quiet footpath along the Demer. The next stopping point is somewhat larger: the market town of Scherpenheuvel. It’s dominated by its basilica which is a famed site of pilgrimage for Belgian pilgrims.

Officially called the Basilica of Our Lady of Scherpenheuvel, this impressive Baroque church was built between 1609 and 1621. Legend has it that a shepherd boy found a statue of Mary that had apparently fallen from a niche cut in an old oak tree. He tried to lift it but failed. Not only was it too heavy to lift, but when he touched it he was paralyzed in his legs. Eventually his boss came looking for the boy. The man replaced the statue in its place in the tree, and the boy was miraculously cured from his paralysis. The statue became a place of pilgrimage and a small chapel was built on the spot. In 1603, drops of blood flowed from the eyes of Mary’s statue. This signalled the start of a major construction project …

The Basilica is apparently the most-visited shrine in Belgium. It’s built on the site of the oak tree; the main altar is built directly over where the tree stood.

Normally Scherpenheuvel would be teeming with visitors, especially at this time of the year in between Ascension and Pentecost. But the coronavirus pays no heed to the religious calendar. Like the picnic table and the café, the basilica of Scherpenheuvel was deserted, as was the town. When lockdown is over I’ll return and make a photo report of the interior.

Scherpenheuvel is exactly halfway along this route. Now, I have to admit that I didn’t choose the best route back to my starting point. Displaying a total failure of advance planning, I simply chose to follow the walking junction network. As regular readers of this blog know, I am a great fan of this network as it takes you along some lovely footpaths that you would otherwise miss. Unfortunately, whoever planned the network of routes from Scherpenheuvel to Langdorp was clearly having a bad day at the office.

From Scherpenheuvel I followed nodes 244-120-209-128-260-385 and then back along the river to Langdorp. I had noble intentions: to investigate the village of Messelbroek. However, not only is Messelbroek rather dull and uninteresting, but the route between 209-128-260-385 just goes along the roads and is rather tedious, to put it mildly. A rather unimaginative implementation of local footpaths, if I may say so.

You’ll still be able to see this rather impressive sculpture on the roundabout in Zichem at the end of Pater Richard Vande Wouwerstraat. It’s the statue of the Spanish knight Don Jon (Don Juan). The name is a pun. A donjon is a castle tower. The statue itself symbolizes the courageous resistance of the town’s inhabitants against the Spanish conquerors.

Another unusual sight I came across that I have never seen before is this:

If you read my last post on identifying farm crops you’ll know that I said that maize in Belgium is grown as a forage crop. In other words it’s all mushed up and fed to cattle. This photo clearly proves me wrong as it shows the individual corn cobs being dried. The two openings at the bottom seem to be to take the dried cobs out.

This is the shorter, 8k, family-friendly walk I mentioned earlier as an alternative to the 25k hike.

You take the train to Testelt railway station and walk back to Langdorp. So you are basically on the first section of the route I describe above, but walking in the opposite direction. And of course without the extra leg to Scherpenheuvel. On the map I also add the extra 1.2 km walk to Langdorp station. Again, you can download the GPX and details, including the map above, from RouteYou.

So there you are. Two lovely Demer Valley walks. Both are easily accessible by public transport. Hopefully soon you will be able to get an ice-cream from De Wolf Café; sit on the 35-metre long picnic bench; and take a stroll around the Basilica. Let me know how you get on! Any questions on these routes or any others that I cover on this blog, just use the contact form or drop a comment below. And if you want to get regular updates on new walks, add your email below.

Two delightful walks along the lovely Demer Valley in Flemish Brabant. A shorter family-friendly 8k, or go all day on the 25k hike!