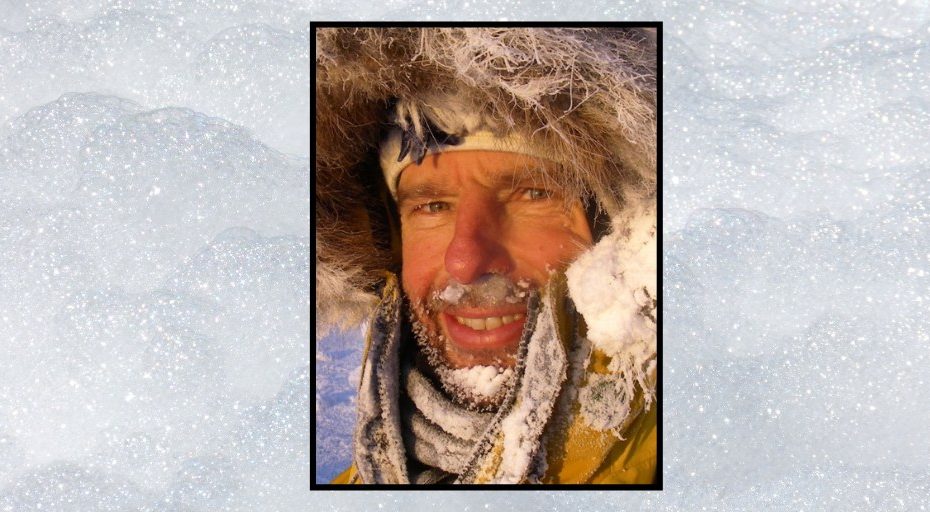 On 7 June 2021 the well-known Belgian polar explorer Dixie Dansercoer died during an expedition in Greenland. Here is a brief summary of the achievements of this Remarkable Belgian.

I was privileged to meet polar explorer Dixie Dansercoer back in October 2008. I’d been asked to interview him for an article for a Flemish newspaper. I was delighted to get this commission as I’d followed his exploits for a number of years. He was a renowned endurance athlete and explorer, acclaimed for polar treks, high-altitude mountain biking, windsurfing, and ultramarathon running.

We arranged to meet in a café in Huldenberg where he lived. On my way there, I wondered what kind of man I’d be meeting. Looking back, I think I’d conflated the man with the environment. I was expecting to meet a man who was cold, austere and silent, like the polar regions he was at home in. Nothing could have been further from reality.

Over a cup of coffee and a slice of warme appeltaart met roomijs I found Dixie Dansercoer to be warm, friendly, approachable, and exceedingly chatty. To my surprise, he was genuinely interested in me: how long I’d been in Belgium, what I thought of it, where I lived. He was delighted to discover that my youngest daughter had been in the same school – even in the same class – as one of his own four children. It was quite some time before we got around to discussing the purpose of our meeting.

Since then I have continued to follow his adventures with great interest and admiration. I was as shocked as anyone to hear of his tragic death in Greenland earlier this week. During a 2200-kilometer expedition by snow kites on the Greenland ice, he fell into a deep crevasse. It is unclear whether his body will ever be recovered.

Here is a brief summary of his main achievements.

Dixie Dansercoer makes a record-breaking crossing of the Antarctica with Alain Hubert.

The European Space Agency commissions Dansercoer and Hubert to measure snow cover in the Arctic to calibrate measurements taken with the CryoSat 2 satellite. The two leave Arctic Cape, Siberia on 1 March 2007. They reach the North Pole after 55 days and Greenland in another 51 days, the first time anyone has walked from Siberia to Greenland.

Dansercoer leads the “In the wake of the Belgica expedition”, a re-enactment of the 1898 expedition of Belgian explorer Adrien de Gerlache.

Together with Sam Deltour, Dansercoer breaks the world record for the longest non-motorized expedition in Antarctica. On skis, and assisted by a kite, the pair travel at least 5013 km.

Dansercoer and Eric McNair-Landry complete the first full circumnavigation of the Greenland ice cap, covering a distance of 4,040 kilometers by ski-kite.

Dixie has written a number of books about polar expeditions and the parallels with corporate life. They include:

Dixie Dansercoer provided polar guiding services through his companies Polar Circles and Polar Experience, with trips to both the Arctic polar regions and Antarctica. Together with ultra-runners Erik Michels and Christoph Vandewiele, he co-founded Polar Running Expeditions in 2018, a new type of fast-paced polar expedition. In 2012 he was awarded the title of Master Guide by the International Polar Guides Association.

Dixie leaves behind his wife Julie Brown, and his four children Jasper, Evelien, Thijs and Robin.