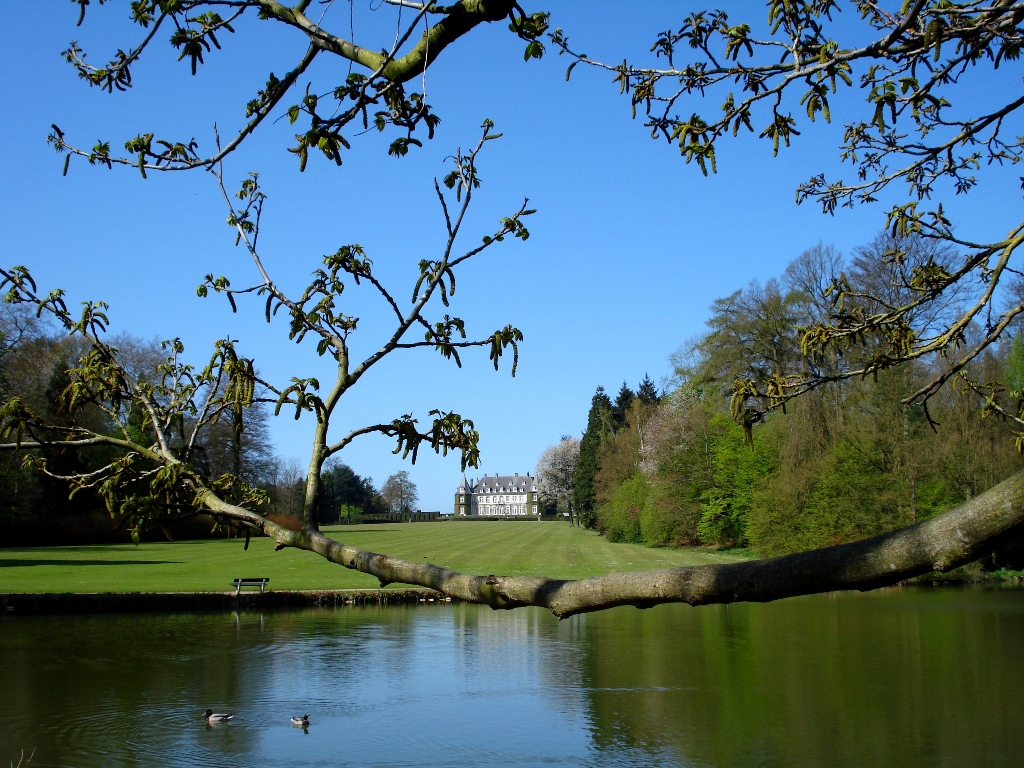 Domain Solvay is located 12 km south-east of Brussels, in La Hulpe. Thousands of people visit Domain Solvay each year, picnicking on the grass or admiring the Château de La Hulpe. Yet much of the 220 hectares of the grounds remains unvisited.

On RouteYou I have added two walks you can do. This one is a short 6 km walk starting from the bus stop on Chaussée de Bruxelles. It covers the main sights described below. It’s also suitable for children, although if you are pushing a buggy you are advised to forget the path along the Argentine but keep to the parallel roadway.

This one is a longer, 10 km walk that starts from the car park at the other end of the Domain, at Drève de la Ramée, and takes you through the surrounding woodland.

One nice feature of the Domain is the abundance of benches, so you will never be short of a picnic place.

Domain Solvay can be accessed by car from junction 3 of the E411 or via the N275 Terhulpsesteenweg from the Brussels Ring. By public transport from Brussels, take TEC bus 366 (Ixelles to Court Saint Etienne) and get off at the stop called “La Hulpe Etangs Solvay”.

WHO OR WHAT IS SOLVAY?

Domain Solvay is named after Ernest Solvay (1838-1922), who was born in Rebecq, Belgium, to a quarry master and his wife.

Ernest and his brother Alfred developed a new process for the industrial production of sodium carbonate. They founded the Solvay company in 1863, flirting with bankruptcy while perfecting the process. From 1870 to 1880, Ernest Solvay oversaw the global expansion of the company, setting up factories in Belgium, France, UK, Germany, Russia and the United States. Today, about 70 Solvay process plants are still operational worldwide. He used his wealth to found several scientific, philanthropic and charitable foundations.

In spring the wild flowers along the edge of the lake are superb, and include bluebell, lily of the valley, wood anemone, bugle, wild sage, marsh marigold, self-heal, ground ivy and dog violet.

A flight of steps leads from the lakeside up to the Belvedere.

The dictionary describes a Belvedere as “a small pavilion or tower, built to give a view of the scenery.” I am sure that when this Belvedere was built it offered a marvellous view of the countryside. Now, however, the trees have grown higher than the Belvedere, so all you see are leaves. But it’s good exercise to climb the steps — all 147 of them.

The woods are part of the great Sonian Forest, a 43 square kilometre mixed woodland that was once part of a huge forest that stretched from the Rhine and Moselle rivers in Germany to the North Sea.

As the population of Belgium grew, the forest began to shrink as woodland was converted into fields. Some degree of protection was afforded in the 12th century by the Duke of Brabant, who established the forest as a hunting ground. In the 1730s, tree nurseries were created, along with jobs for 19 foresters and four tree inspectors. Shortly after Belgium gained independence in 1830, the Belgian State bought the forest. Thanks to a Royal Decree, the Sonian Forest has enjoyed protected landscape status since 1959.

This strange 36-metre high tower was built by Ernest John Solvay, the grandson of Ernest Solvay. It has a 4.5 metre diameter sun on top. It is said that he built it so that he could look at “the sun” each morning from his west-facing bedroom in the chÃ¢teau.

The Château farm ceased to be a working farm in 1971. It has been converted by the Folon Foundation into a permanent exhibition of over 500 works of the Belgian artist Jean-Michel Folon (1934-2005). It includes watercolours, engravings, posters and sculptures, along with music, films and optical effects. It is open every day except Mondays, from 10.00 to 18.00. Admission fee is 7.50 EUR or 5 EUR for children.

Jean-Michel Folon was born in Uccle in 1934. As a child, he lived near to La Hulpe, and was a frequent visitor to the park, which he described as “the garden with the thousand rhododendrons.”

Folon was a very versatile artist, involved in drawing, painting, etching and sculpting. He illustrated books for writers such as Kafka, H.G. Wells and Ray Bradbury, magazines such as Time and New Yorker, and painted murals such as the one in the Brussels metro station Montgomery. He designed posters for humanitarian causes. In 1988 he illustrated the Universal Declaration of Human Rights for Amnesty International, and in 2003 became Ambassador for Unicef.

Folon exhibited across the world: New York (first in 1969 and later in 1990 at the prestigious Metropolitan Museum of Art), Milan, Paris, Rotterdam, London (Institute of Contemporary Art), Antibes (the Picasso museum), Venice, Buenos Aires and Tokyo. He died in Monaco on 20 October 2005.

The centrepiece of Domain Solvay is the Château de La Hulpe.

It looks like it’s been airlifted in from the Loire Valley, but was actually built here by the Marquis of Bethune in 1842. At the end of the 19th century, wealthy Belgian industrialist Ernest Solvay acquired the property. In 1968 the Solvay family donated the château and park to the Belgian government, although only the grounds, not the château itself, are accessible to the public.

The French-style gardens of the château include large statues of Mars, the God of war, and Minerva, the goddess of wisdom and the crafts; and smaller ones representing the four seasons.

The footpath indicated follows the small stream called the Argentine. On the other side of the stream is the Nysdam nature reserve belonging to Natagora, the Belgian nature conservation organisation.

I like walking along the Argentine in Spring as it’s full of wild flowers: butterbur, red and white campion, comfrey, ragged robin, wild strawberry, Solomon’s seal, cowslip, cuckoo pint and a wild orchid called the common twayblade. A favourite of mine is ramsons. I can often smell it before I see it, as it’s also known as wild garlic. Its leaves can apparently be used in salads, but I haven’t tried it yet.

Further along the path you will get good views over the lake, where you should be able to identify birds such as pochard, tufted duck, great crested grebe, Canada goose and heron. In the spring and summer, swallows, house martins and sand martins are fond of flying over the lake to catch insects.

Around the marshy edges, look out for coot, moorhen and the water rail. The water rail is fairly common in the Nysdam nature reserve, but it is difficult to see, as it usually skulks in the reed beds. You are more likely to hear its strange call, which has been likened to a squeaking piglet.

Two other birds you are more likely to hear than see are the reed warbler and sedge warbler. Both emit loud, rambling, long-lasting warbles full of trills and whistles. They also mimic other birds — even the squeaking piglet call of the water rail!

I hope you enjoy your walk around Domain Solvay. Subscribe to Discovering Belgium by adding your email below. You’ll get all new posts delivered into your inbox.