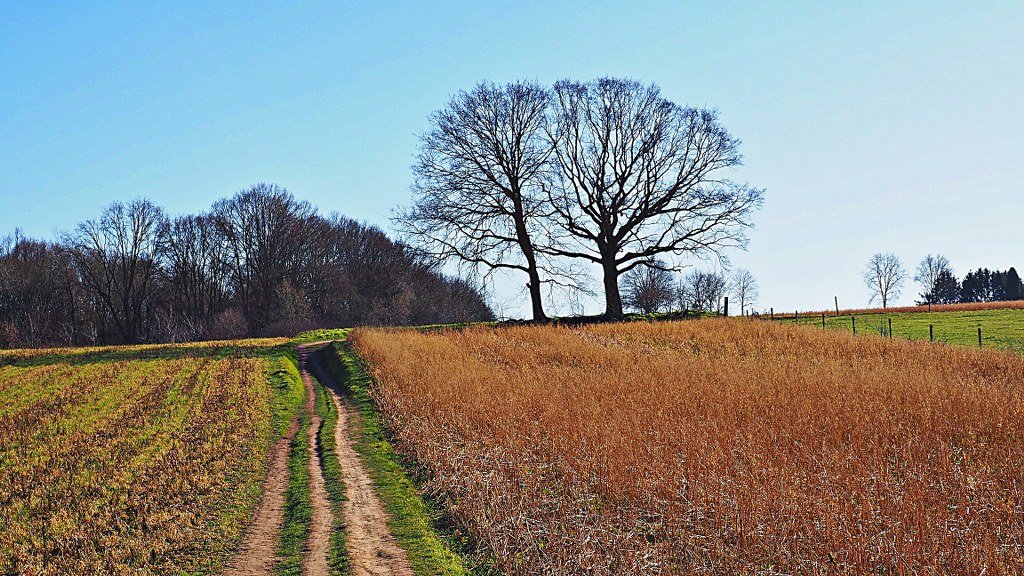 The Eikelberg Walk in Gelrode is an 8.5 km family-friendly circular walk in Flemish Brabant, through pleasant woods and fields and with some outstanding views.

After the recent snow and sub-zero temperatures, it seemed someone had put one of Herr Bunsen’s burners under the thermometer, causing it to rise 25 degrees in one week. It was thus the warmest February 21st in Belgium since records began. Certainly welcome after the recent freezing days and nights, but scary as we continue to get these wild fluctuations in the weather. The official peak temperature on Sunday was recorded as 17.9°C, pulverizing the previous record of a mere 14.6°C set in 1946. Average temperatures at this time of the year are around 6 to 7°C.

Who is Herr Bunsen, you ask? He gave his name to Bunsen burners. They were compact gas burners that produced a small single flame to heat, sterilize, burn etc., in all kinds of laboratory experiments when I was at school in the 1970s. Do kids today still use Bunsen burners in school chemistry lessons? I doubt it very much. They were a great source of fun and wickedness in my boy’s grammar school. I saw (and smelled!) all kinds of objects get held over those blue flames that shouldn’t have come anywhere near them. Plastic rulers, ballpoint pens, school caps, a sock, a salami sandwich. It would come as no surprise if they were banned. Spoilsports.

Anyway, that’s enough of Herr Bunsen. Mr Blue Sky was calling my name, and Frau Southerly Wind was telling me to leave my winter coat at home. Destination was Gelrode, a small village to the west of Aarschot in the province of Flemish Brabant. Starting point is the Moedermeule windmill, Hondsheuvel 3, 3200 Gelrode. Gelrode is a village belonging to the larger town of Aarschot. In the 1950s Gelrode was nicknamed the “perzikendorp” (Peach Village) because of … well, I’ll leave you to guess.

Mother Mill and her restaurant

The Moedermeule grain mill dates back to 1667. Its name literally translates as “Mother Mill”, apparently because it was the largest of three mills that stood together in the area. It was originally built in Mechelen but in 1883 was demolished and transported to Gelrode. In 1943, lightning struck the mill and it was badly damaged, and was restored in 1976. Goodness knows what happened to her children.

The adjoining mill-house is now the Moedermeule brasserie restaurant where once lockdown is unlocked you will be able to enjoy a pleasant drink or meal on the terrace. Every first and third Sunday of the month, the mill opens up for some traditional milling. Or it will after restrictions are lifted.

Below is the map which you can click to enlarge and/or download as a PDF. You can get the GPX track from my RouteYou page, although as you can see, it’s a walking junction route so is very easy to follow.

Starting point is junction 7 which is at the windmill. You can go clockwise or anticlockwise. I followed the clock and headed north to junction 705 and then onto the Eikelberg. The Eikelberg is a 48-hectare hill that is rich in local ironstone, which was quarried here until as late as the 1970s. It has rather a somber past. There was a well-used gallows on the hill. The corpses were displayed along the busy Leuven-Aarschot road as an example of what happens if you are naughty. (Or if you messed around with Bunsen burners?). The hill used to be covered with heather but has been well forested.

Ah the Spring is not far away. A patch of naturalized Eastern Cyclamen was already in bloom. A welcome sight indeed.

From the Eikelberg there are plenty of opportunities to take a break and look at the scenery.

Next stop is the Kloesebos. This woodland area is well worth a visit, and I must remember to return here and take some time wandering through the glades and clearings. There are large open stretches of heather in between the native oaks and birches, and I’ve read that it’s a good spot for butterflies. Part of it is set aside for a children’s woodland play area.

Leaving the Kloesebos behind, the route goes quite close to the E314 motorway. You can’t see it, but you can hear it, but it’s not too much of a pain on the ears. In this more agricultural area I came across a tractor graveyard. It always amazes me when I see these hunks of metal and machinery rusting away in the fields. I would have thought that just as scrap metal they would be worth a tidy sum.

Then it was time to follow the route back to the Mother Mill.

An attack of crane envy

With only one kilometer to go, I enjoyed the sight of two different flocks of cranes flying overhead on their migration route to Scandinavia, honking their unique frog-like calls as they did. I love seeing these magnificent birds en route from their over-wintering grounds in Spain and Portugal to their nesting sites in Sweden and its neighbors. I wished them well, and that the Great Spirit would protect them on their long and arduous journey.

But I also felt rather envious of them. I watched them flying north and imagined them passing over the Netherlands, Germany and Denmark. Over the Skagerrak and into Sweden. Flying over immense dark forests and huge lakes glistening in the sunlight. They pass over a city with a river flowing through it. A busy shopping center. Over the suburbs, their eyes are caught by activity down below. In a small garden a young boy is riding his bicycle round and round the garden in perfect circles. In the center of his circles, a tiny toddler has just mastered the use of a slide. She climbs the stairs, flings herself down the slide, picks herself up, repeats again and again. The cranes croak a greeting and the children briefly stop their fun activities and peer up at the giant birds.

The children are our grandchildren. We have never seen the younger one, who was born just prior to the first appearance of COVID. We miss them terribly. That’s why I envy the cranes. But of course, we’ll be able to see them one day. The cranes also passed over many houses and gardens that are now empty. Where people of all ages were taken ill, went to hospital, and never came out again. In that context, not being able to see one’s grandchildren is a minor hardship.

If you are travelling to the area by car, there is a car park at the mill. By bus, De Lijn buses 334 and 335 go to Gelrode from Leuven bus station. Get off at Gelrode Statiestraat and you have a 500 m walk to the mill.

The total distance of the walk is 8.5 km but as you see from the map it would be easy to take a short-cut here and there if you don’t have time to do the full distance. Most of the walk is on footpaths, but these are not muddy (apart from one short stretch), although not suitable for baby buggies. About 15% is alongside roads, but these are quiet and relatively traffic free.

I hope you enjoy this Eikelberg Walk in Gelrode. Let me know how you get on. Any questions just drop me a line. And if you’re not subscribed to Discovering Belgium, add your email below to get new walks dropping straight into your inbox:

P.S. If you have any great stories of your own experiences with Bunsen burners, I’d love to hear them!

P.P.S. If you have found this post useful and would like to support Discovering Belgium, you can. Here. Thank you. Denzil