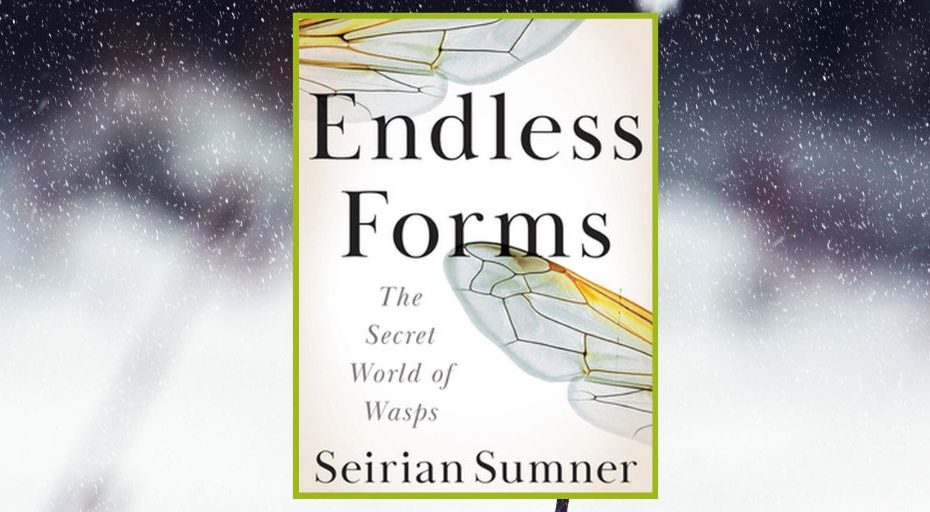 Endless Forms by Seirian Sumner gives wasps some much-needed wasp-love, and entertainingly describes how wasps are essential and valuable insects.

I’ve read a lot of articles and books about bees. Perhaps you have too. That’s not surprising. Everyone loves bees. They mind their own business. They generally don’t sting you. They look all fuzzy-wuzzy. They even do waggle-dances for goodness sake. And they are incredibly useful, being master pollinators and superb honey-makers. Oh, we love bees don’t we?

But wasps? We love to hate them. And with good reason. They are totally annoying. They disrupt our picnics. They freak out the kids. They go out of their way to sting you. And what use are they: they don’t make honey. Wouldn’t the planet be better off without wasps?

Well, Seirian Sumner, Professor of Behavioural Ecology at University College London has addressed all those (and plenty more) arguments against wasps, and has firmly set the record straight in her delightful book “Endless Forms: The Secret World of Wasps”.

In an entertaining and easy-to-read book (she may be an academic but she definitely doesn’t write like one!), Seirian redresses the balance and gives wasps some much-needed love and some great PR. I certainly came away realizing that wasps have a number of key roles to play in the world, and a waspless world would be a seriously deficient world.

In fact, it turns out that wasps are much older than bees. Bees evolved from wasps, which were flying some 100 million years before the first bee arrived on the scene! Indeed, a bee, says Seirian, “is just a wasp that has forgotten how to hunt.”

And boy do wasps love to hunt! This book will open your eyes as to the many ways that wasps track down their prey with laser precision, even from a distance. Then, depending on the species, they will sting them, paralyze them, parasitize them, and feed them to their babies. And as many of the items on their menu are what we consider pests, the more wasps the better!

As well as being efficient pest controllers, wasps are also important pollinators. Yes, you read me right. Fig wasps, for example, are crucial to the world’s fig trade. Pollen wasps have lost the ability to hunt and instead collect pollen and nectar from plants. In short, as Seirian writes, “Wasps are one of nature’s most secret and neglected gems.”

Seirian Sumner has spent all her professional life studying wasps. In her book she shares entertaining stories of her waspish escapades in many parts of the world. She also shares the passions of wasp-lovers who have come before her – in the chapter entitled “The Obsessions of the Wasp Whisperers” – such as George and Elizabeth Peckham in the early 1900s, and the French naturalist Jean Henri Fabre.

She also delves deep into the darkness of social wasp colonies, revealing staggering truths of how a queen of a colony is chosen, what happens when worker wasps rebel, and how mating works in the world of the wasp.

“Without the services of wasps as pest controllers, pollinators, seed-dispersers and decomposers, our forests, grasslands, parks, gardens, deserts, highlands, moorlands and heathlands would not support planetary health in the way they currently do.”

In other words, Endless Forms by Seirian Sumner reveals the multiple ways that wasps are the hidden treasures of our ecosystem. The book is basically one strong argument why we need to better understand them, protect them, and learn not only to live close to them, but nurture them, as they are extremely important for our planet’s health.

Endless Forms by Seirian Sumner is available from local bookshops or online, for example from Amazon Belgium.

As an Amazon Affiliate I may receive small commissions from certain items.

You may also like to check out my two previous positive posts on wasps: How to deal with wasps, and 6 ways that wasps are beneficial.