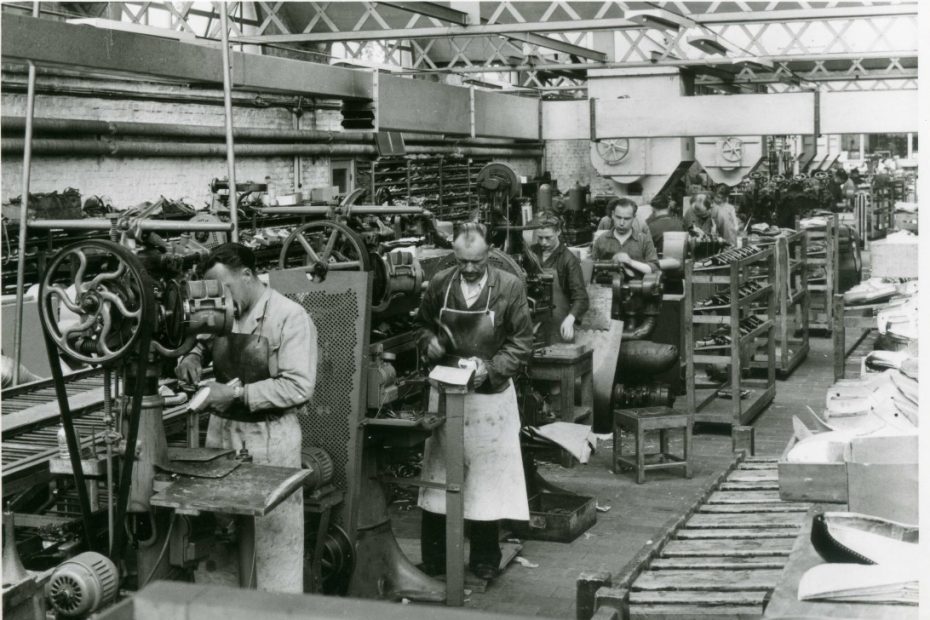 In the Eperon d’Or museum site in Izegem, in the province of West Flanders, you can experience a fascinating slice of Belgium’s industrial heritage. It’s located in a beautifully restored Art Deco shoe factory – where brushes were also manufactured. Shoes and brushes are not surprisingly in the foreground, but there is also a lot of attention for the broad impact of industrialization on the town, the region and the residents. And just down the road you can visit a huge steam engine!

Eperon d’Or through the ages

The story of Eperon d’Or begins in the middle of the 19th century. Emiel Vandommele is a gifted student of the Izegem master shoemaker Eduard Dierick, who had already made boots for the kings Willem I and Leopold I around 1830. Vandommele emerged as an ambitious entrepreneur and founded the shoe company Eperon d’Or in 1863. He chose the name because of his love of horses (eperon being French for spurs). The company prospers. By 1870, 80 employees were turning out 15,000 pairs of shoes a year.

By the turn of the century, the Vandommele family’s “Chaussures d’Iseghem” had become a mark of top-quality, and Izegem had gained a reputation as Belgium’s premier shoe town. In 1930, the company made a bold statement by constructing its own Art Deco administrative building. At that time, Eperon d’Or employed about 180 people.

But in the 1960s, the shoe company was getting kicked by the competition, particularly from Italy and eastern Europe. In 1967 Eperon d’Or was declared bankrupt. Fortunately, the remarkable administrative building was preserved, and in 1999 was officially protected as a monument. Six years later, the town of Izegem bought it. Another six years later, in 2011, the factory behind it also came into the town’s hands.

Work started on the restoration, renovation and repurposing of Eperon d’Or. The former shoe factory became an industrial heritage site with a museum and tourist office. The completed Eperon d’Or museum site was opened to visitors in June 2017.

Not surprisingly, the current Eperon d’Or gives you an overview of the Belgian shoe industry through the ages. On display are some of the original shoes made here, such as the boots of King Willem I and some of the most fashionable types and brands. The museum holds almost 4000 pairs of shoes – some nearly 200 years old – in carefully regulated storage conditions. In the factory hall, a complete production line has been reconstructed, so that you can see how shoes were made in the 1950s. You can get to know all the many types of leather that are used for their shoes and boots. And you can discover what factory life was like for the workers, and the effect of mechanization on the production processes.

Eperon d’Or was also renowned for its brushes: and not just shoe-cleaning brushes! They made hair brushes, moustache brushes, hat brushes, piano brushes. Tiny and giant brushes. Radiator brushes. Calligraphy, paint and artists’ brushes. Even witches’ besoms. Learn about what it takes to make a good brush; the machines that put an end to hand-craftsmanship; and taste and feel the raw materials and components of brushes.

Did you know that the largest preserved steam engine in the country is located in Izegem? At the end of the 19th century, the town council decided it needed its own power station to supply Izegem with electricity. So it built its own steam engine. It was an unusual project; so unusual that the then Prince Albert personally inaugurated the power station in 1901. In 1936 the next generation of Izegem engineers wanted to go one step further. They expanded the plant by adding a huge new 110-ton steam engine. You can still admire it today. It doesn’t make electricity but it’s still fired up from time to time. It’s maintained by a dedicated group of local engineers. It’s housed in the Museum for Steam and Electricity which is next door to Eperon d’Or. But it can only be visited by appointment and with a guide. (You need to email [email protected]).

The iron skeleton of the original factory is still present today. The shed roof and long east façade have been reconstructed. The imposing Art Deco front administrative building has been restored to its former glory. The interior is finished with tiled floors and granite floors in geometric motifs. The original color scheme for the floor, walls, windows and doors was thoroughly researched and carefully reconstructed during the restoration.

The Eperon d’Or industrial heritage site Is open every day except Mondays and national holidays, from 13:00 to 17:30. A standard ticket costs 6 EUR. More information on tickets here. It’s located at Prins Albertlaan 5, 8870 Izegem. There’s plenty of car parking space opposite. By public transport, Izegem bus and train station is only a 5 minute walk away.

Fancy a trip to a museum?

I haven’t written about museums in Belgium for a while. Not surprising, because with the COVID restrictions many have been closed. But they are now re-opening and welcoming visitors once more. Here are a few that I have enjoyed visiting and which might pique your interest:

(The one in Wervik is only a 20-minute drive from Eperon d’Or so you could combine the two in one day).

Any questions, comment below or contact me. I’ll be covering more museums in the coming weeks and months. To get immediate notification of these and other posts, you can subscribe to Discovering Belgium by adding your email below: