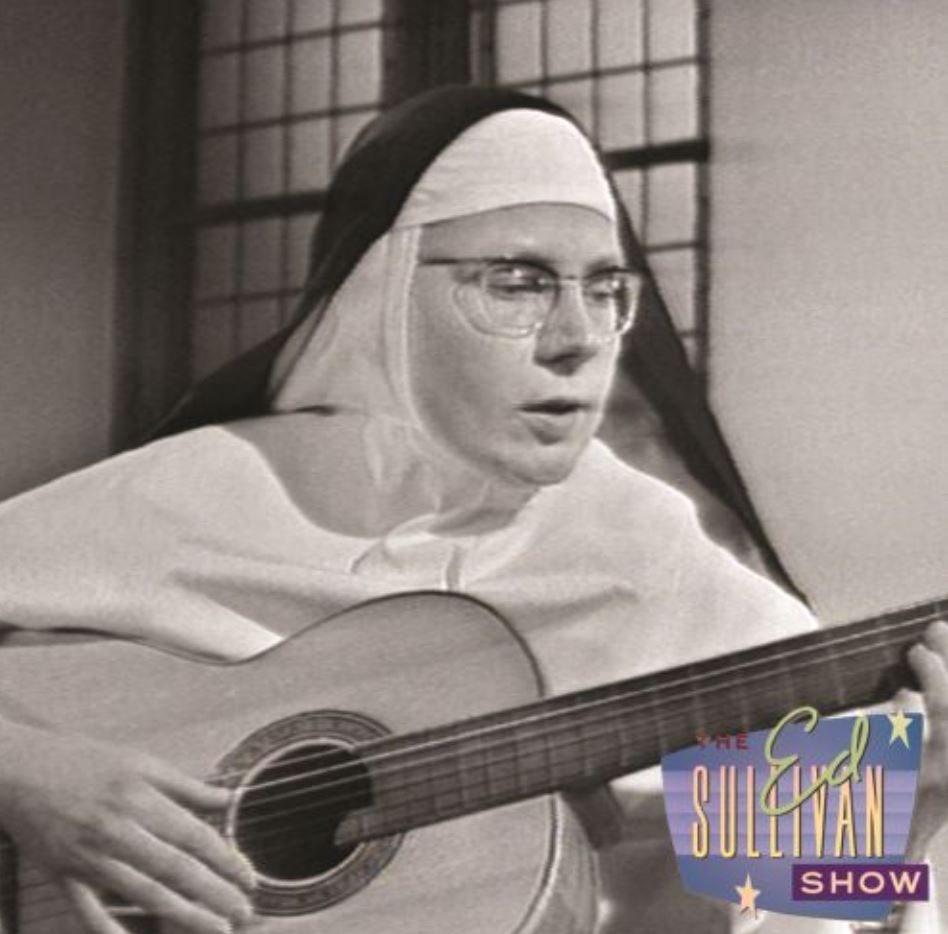 Observant readers may remember that in my Waterloo Battlefield Walking Tour I stood outside a convent that once had a famous occupant. It’s a story I couldn’t resist. A Catholic nun with a no.1 hit single. Great riches yet great poverty too. A loss of faith and a personal tragedy. This is the story of The Singing Nun.

Who was The Singing Nun?

She was Jeanne-Paule Marie “Jeannine” Deckers, who was born on 17th October 1933 in Laeken. Educated in a Catholic school in Brussels, at the age of 15 she had a premonition that she would become a nun. She was an enthusiastic girl guide, a skilled guitarist and singer, and obtained a diploma that enabled her to teach sculpture. She did this until she was 26, when she left the teaching profession and entered the Fichermont Dominican Sisters Convent (the one I stood outside on the Battlefield of Waterloo). Here she took the religious name Sister Luc Gabriel.

In the convent, Sister Luc Gabriel’s talents as a singer-songwriter came to the fore. She wrote, sang, and performed her own songs for fellow nuns and visitors. Her religious superiors suggested she record an album, which visitors to the convent would then be able to purchase. She agreed, and an album of her songs was recorded at the Philips studio in Brussels in 1961.

The album proved to be incredibly popular. In 1962 it sold nearly two million copies. One of the tracks — Dominique — became an international hit. Sister Luc Gabriel was in great demand. She changed her name once more, with her stage name being Soeur Sourire (Sister Smile). She gave concerts, and on 5 January 1964 appeared on The Ed Sullivan Show on US TV.

Dominique’s success cannot be over-stated. It was huge. It topped the American chart for a staggering four weeks, becoming the US Christmas No. 1 of 1963. Moreover, for the first time in American chart history, The Singing Nun had a simultaneous No. 1 single and No. 1 album, both of which sold over a million copies. The song Dominique won a Grammy Award for Best Gospel or Religious Song.

It was also internationally successful. It was the number 1 single in Canada, New Zealand and Australia, and one of the top ten singles in the charts in Norway (2nd), Ireland (4th), Denmark (4th), the Netherlands (6th), Germany (7th) and the UK (7th) in 1963.

In 1966, the movie The Singing Nun was made, featuring Debbie Reynolds as Sister Luc Gabriel and singing Dominique in English.

And if you’re wondering what the lyrics might be in your own language, maybe you’ll find them here:

Conflict in the convent

Sister Luc Gabriel had one foot in the deeply religious world of the convent, and the other in the highly secular pop world. It was a tension that could not be held for long. Her convent superiors began to describe her as a “bad influence” and prevented her from being in close contact with the other nuns. She left the convent in 1966.

Frustrated by the lack of reform in the Catholic church, in 1967 she released a song defending contraception, entitled “Glory be to God for the Golden Pill.” Unfortunately she had not reckoned on the influence of the church. One of her concerts was cancelled, and other venues would not accept her.

Now operating under her real name, Jeannine Deckers released an album entitled “I Am Not a Star in Heaven.” It bombed, as did a subsequent single “Sister Smile Is Dead.” She began teaching disabled youngsters in Wavre, eventually opening her own school for autistic children. Unfortunately she suffered a nervous breakdown which required two years of psychotherapy.

Most (apparently 95%) of Jeannine Deckers’ earnings went to Philips and her producer. The rest headed to her religious affiliation, which earned at least $100,000 in royalties. Deckers’ personal income was therefore minimal. However, in 1970, the Belgian tax authorities saw things differently and sent her a bill for $63,000 in back taxes for her earnings.

Jeannine was beset with financial difficulties for the next decade or more. In 1982, she tried to resurrect her musical career as Sister Smile with a disco synthesizer version of Dominique, but this failed too. That same year, the autism school had to close, also for financial reasons.

A friend to cherish

For much of her life, Jeannine was in a close relationship with her friend Annie Pécher. They met as teenagers. The two shared an apartment and Annie was involved closely with Jeannine’s business deals. In 1968, Jeannine said that she and Annie were categorically not in a lesbian relationship. A biography suggests otherwise.

The tragic end of The Singing Nun

On 29 March 1985, Jeannine Deckers and Annie Pécher took an overdose of barbiturates and alcohol. A note they left stated, “We are going together to meet God our Father. He alone can save us from this financial disaster.” They also wrote that they had not given up their faith and wished to be buried together with the funeral rite of the Catholic Church.

On 4 April 1985 Jeannine Deckers and Annie Pécher were buried together in Cheremont Cemetery in Wavre. The inscription on their tombstone reads, “J’ai vu voler son âme / A travers les nuages” (“I saw her soul fly through the clouds”), a line taken from one of her songs.

Do you remember her?

Do you have any memories of The Singing Nun? Did you watch her on TV or go to one of her concerts? Did you listen to the song Dominique or perhaps even buy the record? Do you have her album? If you’re Belgian, what do you recall of her? I’d be interested to find out, so feel free to share your thoughts and memories below.