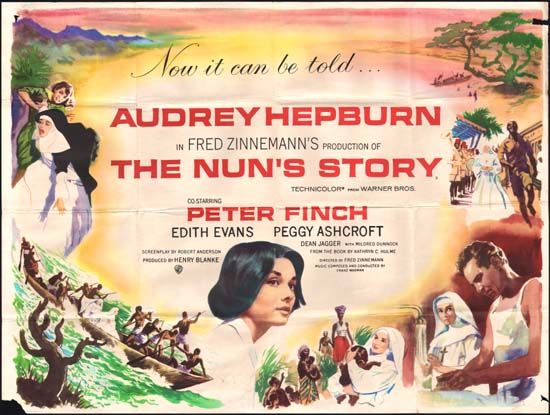 The life of Marie-Louise Habets, a Belgian nurse and former nun, was portrayed by Audrey Hepburn in the 1959 movie “The Nun’s Story,” which was based on a book by American author Kathryn Hulme. I look at the remarkable connection between Habets, Hulme and Hepburn.

Born in 1905 in the small Belgian village of Egem, in her teens Marie-Louise Habets hears the call of God to become a nun. At the age of 21 she joins the Sisters of Charity of Jesus and Mary, an enclosed religious order caring for the sick and poor within their cloister.

She enters their convent on Molenaarstraat in Ghent, taking on the religious name Sister Xaverine. Here she receives training as a nurse. In 1933 Sister Xaverine is sent to work in a mission hospital in the Belgian Congo where she stays for six years, performing valuable work.

In 1939 she contracts tuberculosis and returns to Belgium, to the order’s convent in Uccle, Brussels. It’s not the country she left. She witnesses the invasion of Belgium by the Nazis, and the death of her father at the hands of German soldiers.

Sister Xaverine is drawn into the Belgian Resistance but realizes that this action, fueled by hatred for what the Nazis did to her family, is not in line with her Christian beliefs. She applies to the Holy See for a dispensation from her religious vows. It’s eventually granted, and Marie-Louise says goodbye to both the convent and the order on 16th August 1944.

She joins a British First-Aid Auxiliary Unit based in Antwerp. Amongst other tasks, the unit gives medical aid to soldiers wounded during the Battle of the Bulge. Starting from October 1944, Antwerp is heavily bombed for six months, killing 3,000 inhabitants and wounding 7,000 more.

It’s a horrendous time for Marie-Louise and her fellow nurses. She describes wading through blood for days, picking up arms, legs and even heads from bombed houses.

After the war, Marie-Louise signs up with the United Nations Relief and Rehabilitation Administration (UNRRA) to provide nursing care to the millions of refugees still left behind in Germany.

At an UNRRA training camp in northern France, Marie-Louise meets an American called Kathryn Hulme and a friendship begins that is to last their lifetimes.

Marie-Louise is assigned to UNRRA Team No. 1050 consisting of Belgians, French, Canadians and Americans. The team is sent to Wildflecken in the north-east of Bavaria where approximately 2,000 displaced persons of Polish origin are believed to be existing in difficult circumstances.

It takes the team 12 days to travel through the ruins of Germany. Upon arriving at Wildflecken, the situation is much worse than expected. 20,000 refugees are packed into 60 blockhouses on a forested mountain. The members of Team No. 1050 roll up their shirt-sleeves and begin the enormous task of clothing, feeding and providing medical care to the refugees.

By 1948, UNNRA has been replaced by the International Refugee Organization (IRO). In this new organization, Marie-Louise is made Area Chief Nurse and transferred to WÃ¼rzburg to oversee the care of some 65,000 displaced persons living in 73 widely scattered residences.

To America with Kathryn Hulme

As the work of the IRO begins to wind down, Marie-Louise considers what to do next. Having no desire to return to her homeland of Belgium, she applies for and gets an American visa. Her sponsor to the United States is her American friend, Kathryn Hulme.

After one last visit with her family in Antwerp, Marie-Louise sets sail from Rotterdam to the United States on the SS Noordam, accompanied by Kathryn. They arrive in New York City in February 1951.

The couple settle in Arizona for a while, where Marie-Louise works in a local hospital among the Navajo patients. From there they move to California.

In 1956, Kathryn Hulme writes a book entitled The Nun’s Story. The lead character of the book is a Belgian nun, Sister Luke (pre-convent name Gabrielle Van Der Mal), who travels to Belgian Congo where she works in a remote field hospital. Back in Europe in the grips of war, Sister Luke struggles not to take sides, especially as her father has been killed by the German Army. Ultimately, Sister Luke has to decide between her devotion to the church and her desire to be a nurse.

Sounds familiar? Yes, Sister Luke is based on the real-life experiences of Marie-Louise Habets, who has shared her story with her friend Kathryn.

The book becomes a best-seller, reaching no.1 on the New York Times best-seller list. Plans are made to turn it into a movie starring Audrey Hepburn. The famous actress meets Marie-Louise and learns some more details of her life and work in Africa.

The movie The Nun’s Story comes out in 1959 and is a box office success. Audrey Hepburn is nominated for an Academy Award for her portrayal of Sister Luke.

In 1960, Audrey Hepburn is involved in another movie; a western called The Unforgiven. During shooting, she is seriously injured when she is thrown by the horse she is riding. She is flown back to her Beverly Hills home on an ambulance plane. During her recovery, Hepburn requires the services of a private nurse.

Who steps in to nurse Audrey Hepburn and help her convalesce? Marie-Louise Habets!

In the 1960s, Marie-Louise and Kathryn moved to Hawaii where they spent the remainder of their lives together.

The stuff of dreams

Marie-Louise must have looked back in wonder at her life’s journey. Surely she could never have imagined when she joined the convent as a nun how her life would pan out. That she would work in a mission hospital in Africa. That she would leave the order that she loved so much. Or that she would travel abroad helping refugees. That she would find true love and settle down with a female partner in America. And would nurse a famous film star back to health. And that a book and a movie would be based on her life!

As Robert pointed out in the comments below, there is another Belgian connection in this story that I had completely forgot. Audrey Hepburn herself was born in Belgium. This was on 4th May 1929 in 48 Rue Keyenveld, which is a municipality of Brussels. Maybe she deserves her own post in the “Remarkable Belgians” category! Did you know I cover another nun in this series?