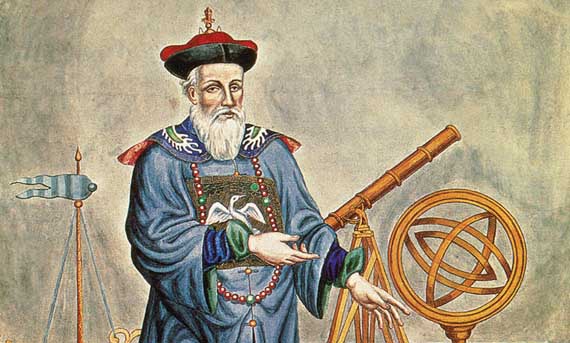 Born in 1623, Ferdinand Verbiest led an exceptional life as a Jesuit missionary to China, an astronomer and an engineer. He’s even credited as inventing the first car!

My previous post was on the Belgian town of Tielt. Just 4 km to the west of Tielt is the village of Pittem. Here, in 1623, Ferdinand Verbiest was born, a man who led a quite exceptional life. Born in 1623, the young Ferdinand’s thirst for knowledge was unquenchable. He studied humanities in Bruges and Kortrijk, philosophy in Leuven, and theology in Rome and Seville. In 1641 he joined the Society of Jesus (Jesuits) and in 1655 was ordained a priest.

His call was to the Far East, so in 1658 Ferdinand sailed from Lisbon, bound for China, where he took up his first posting in Shanxi. These were difficult and dangerous times for Jesuits in China. The death of the Shunzhi Emperor in 1661 left his 7-year-old son Kangxi on the throne. The country was run by four regents, who didn’t merely dislike Jesuits, they actively persecuted them.

The most serious setback came in 1664 when the Chinese Muslim Confucian astronomer Yang Guangxian challenged Father Adam Schall von Bell, the German head of the Jesuits, to a public astronomy competition. Yang won. Schall von Bell and the other Jesuits — including Verbiest — were accused of teaching a false religion, sentenced to death, and thrown into prison. Christianity was to be forbidden in the empire.

Fortunately for the Jesuits, while in prison, three inexplicable natural events occurred: an earthquake, an unknown meteor and a great fire. These were all seen as an omen and the Jesuits were released, although Christianity was still banned.

By 1669, the Kangxi Emperor was old enough to take power, and discovered serious errors in the following year’s calendar, which had been drawn up by the Jesuits’ old adversary Yang Guangxian. Another public test was held to compare the merits of European and Chinese astronomy, and it was Verbiest’s turn to go face to face against Yang. The test involved making three predictions:

Fortunately, Verbiest had a trick up his sleeve; the latest updates on Kepler’s Rudolphine Tables of the stars and planets. He succeeded in all three tests, the calendar was amended (a superfluous month was removed), and Yang received the penalty for his failures. He was put to death!

Verbiest had saved his own life — and those of his Jesuit colleagues — but the consequences were even more far-reaching. He gained the young Emperor’s trust, and his lunar calculations and predictions supported the legitimacy of the Manchu dynasty in China. As a token of his appreciation and as a mark of his friendship, the Kangxi Emperor reinstated the Jesuit missionaries. Under the Emperor’s protection, Christianity spread spectacularly throughout China.

Friendship with the Emperor

The friendship between Verbiest and the Emperor lasted for 20 years, until Verbiest’s death. The Jesuit was frequently summoned to talk with the Emperor in the Forbidden City, where he taught him geometry, philosophy and music, and accompanied Kangxi on his travels through his empire.

Verbiest’s next accomplishment was to compose a table of all solar and lunar eclipses for the next 2000 years. Delighted, the Emperor awarded him complete charge of the imperial astronomical observatory. Verbiest relocated and rebuilt it.

He then designed and constructed six new large-scale astronomical instruments, including a quadrant, an azimuth compass and a sextant, which are still visible in Beijing today.

Another area in which Verbiest excelled was engineering. He constructed an aqueduct, designed a new gun carriage, cast 300 cannons of various types for the imperial army, and even designed what has been described as the first working steam-powered vehicle. At around 60 cm in length it was too small to carry a human passenger, but was nevertheless a remarkable invention.

Verbiest died in Beijing in 1688, from injuries sustained after falling off a horse. He was buried alongside two other famous Jesuits — Father Matteo Ricci and Father Adam Schall von Bell — and was succeeded as the chief mathematician and astronomer of the Chinese empire by another Belgian Jesuit, Antoine Thomas.

On the market square of Pittem is a bronze statue of Ferdinand Verbiest. It represents Verbiest as a Chinese mandarin, sitting in a beautifully decorated seat. He’s resting his head on his right hand while pointing with his left hand to a globe.

The monument was made by sculptor Count Jacques de Lalaing and was inaugurated on 10 August 1913. It soon had to be hidden away to protect it from the “bronze hunger” of the German occupier. On 26 May 1940 the statue was slightly damaged by bomb shrapnel, and was restored in 1988 in the Sergeys bell foundry in Leuven.

For those interested in finding out more about Ferdinand Verbiest, a small information centre is open at Markt 1 in Pittem.