Touring the Battlefields of Flanders Fields 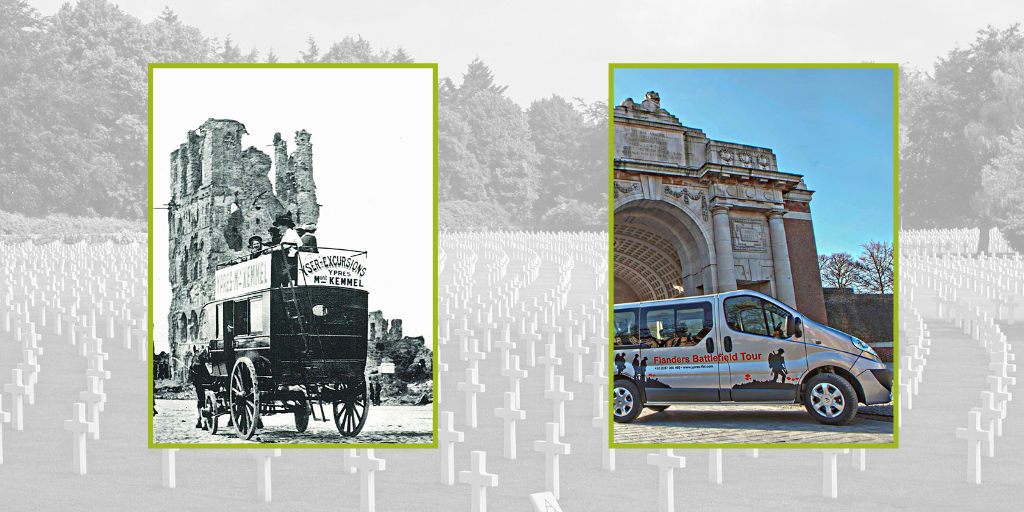 When touring the Battlefields of Flanders Fields and northern France, using an experienced guide can make all the difference.

Very soon after the guns fell silent on Flanders Fields and northern France in November 1918, visitors to the battlefields began arriving. It was a difficult and expensive journey, but these first “battlefield tourists” or “pilgrims” as some preferred to be called, were driven to make the trip to see where their sons, fathers, brothers, uncles and friends had fallen. Those who couldn’t afford the time or expense could try and pay for a photographer, as described in a book I recently reviewed.

The company Flanders Battlefield Tour organizes daily tours of the Ypres Salient and the Somme. It’s run by Jacques Ryckebosch and Genevra Charsley, who have featured on BBC and other international television stations. Both are extremely passionate about the First World War. Genevra has been a member of the Western Front Association since 1997 and has assisted with the Poppy Parade in Ypres since 1997. For many years Jacques was curator at Talbot House.

They also provide a Short Tour around Ypres as well as tours to Fromelles, The Somme, and Vimy Ridge. Moreover, they offer bespoke tours, for example for people wishing to follow in the footsteps of relatives who are resting in peace within a cemetery or listed on one of the many memorials to the missing.

I asked Genevra to explain a little more about the work of a battlefield guide.

what brought you to Belgium?

“I was brought up in the English Midlands near Stratford-upon-Avon. My first real encounter with Belgium was a four-day walking battlefield tour of the Ypres Salient.”

How long have you lived in Belgium?

“We lived in Ypres for three years but then moved back to the UK for 18 months. We returned to Belgium in July 2007 to live in Poperinge.”

Were you interested in First World War history before living in Belgium?

“Yes, and history in general. After going out on my very first tour with Retired Lieutenant Colonel Graham Parker (aka Daddy Parker), my whole perspective on life changed completely. It felt like a monumental shift within me. From that moment on I collected, read, researched, and regularly visited the battlefields with good friends.”

How did you get a job as a Battlefield Guide?

“I don’t think of it as a job, more of a vocation; something that I’m extremely passionate about. Initially I guided part-time whilst living in Ypres and still working part-time for a publication in London. Eventually I made the transition to full-time guiding.”

What do you enjoy most about being a battlefield guide?

“I love interacting with people from across the world, hearing their stories, and being able to help them with furthering their knowledge and research. It’s so rewarding to help people make connections with those who served in the First World War and the generation that came afterwards.”

What makes a good battlefield guide?

“Obviously a battlefield guide needs in-depth knowledge, but also the ability to communicate that information clearly. It means being able to translate from items such as war diaries and military operational histories to on the ground, in a way that your customer can understand and appreciate what’s being said, thus bringing it alive for them in context of the subject matter. It’s also important to be approachable and to be empathic, as many times I am dealing with people who have lost relatives in the war and may still be grieving in some way. Finally, trench and road map reading along with orientation skills are a must. The worst scenario would be for a tour guide to get lost and orientate to an incorrect trench!”

Genevra is an excellent guide, not only well informed but passionate about the history of the area during World War I. She also has a great sense of humor and made the afternoon very enjoyable. I would highly recommend her tour.

Are you constantly adding new material to the tours?

“We are eternal students, so yes we constantly add new material into our tours. Apart from anything it helps us as guides to stay fresh. A recent example is Essex Farm. I did some research on a soldier attached to the Irish Guards. He formed part of a trench raid on enemy lines to gather intelligence and bring back German prisoners. The unit was not allowed to ‘withdraw’ until they had achieved their objectives. He was fatally wounded during the raid and today he’s resting in peace in Essex Farm. So that’s a story that I can add to the tour. It provides an excellent opportunity to explain how deaths occur outside of major offensives. The bespoke tours that we offer generally result in research which enables us to collate new material and build it into our tours.”

Do you have a favourite tour?

“That’s difficult to answer! All the battlefields have their own stories and their own personalities. I enjoy the bespoke tours. But I’m repeatedly drawn to Hill 60 down to Plugstreet in Flanders, and to Loos, along with the Ancre Valley and Serre, in France.”

Thanks Genevra for this insight into an interesting and valuable job. Anyone interested in touring the battlefields of Flanders and northern France can contact Genevra via Flanders Battlefield Tour.

2 thoughts on “Touring the Battlefields of Flanders Fields”