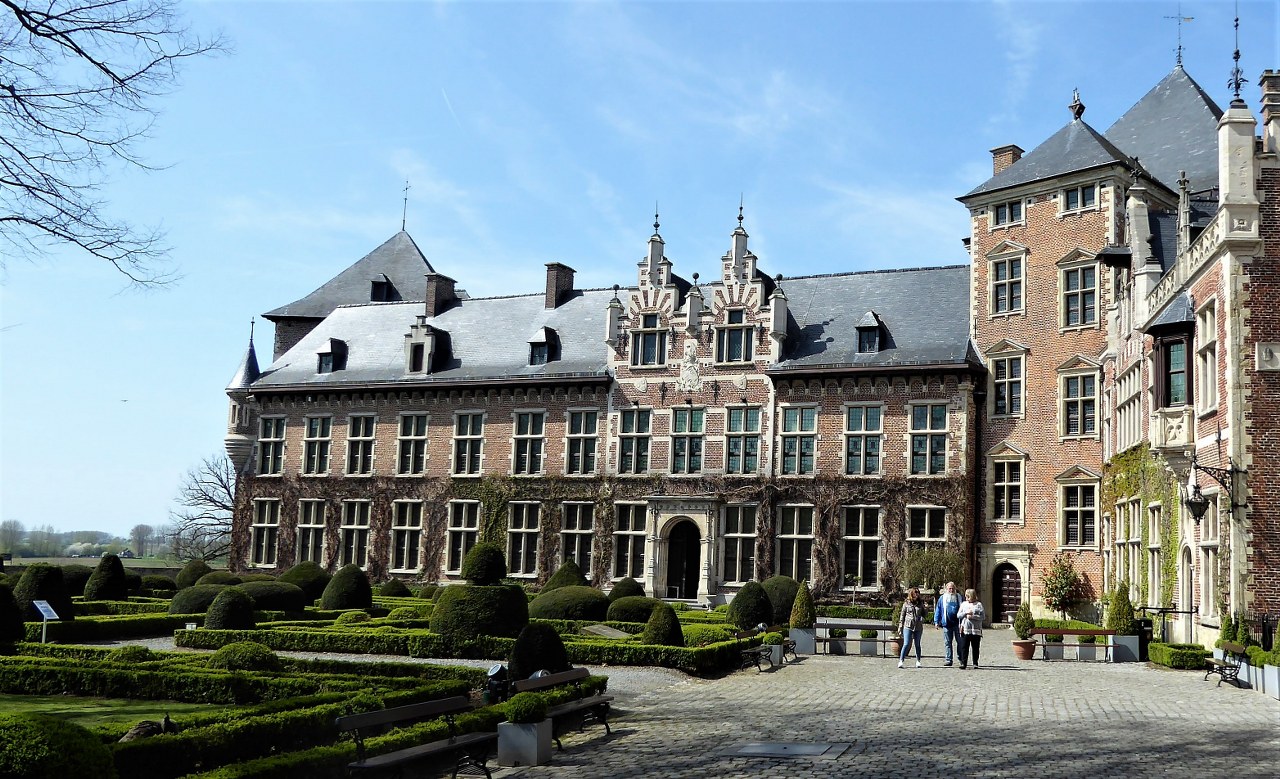 Situated on the outskirts of Brussels, the beautifully furnished Gaasbeek Castle has had a torrid history, but now makes a perfect, peaceful day out. It’s actually a gem. It has a park, woods, a lake, an internationally renowned museum garden, and it holds special events throughout the year.  The original castle was completed around 1240 by Godfried of Leuven, who probably wondered why he had bothered, so frequently was it attacked and damaged. In 1388 it was even destroyed by the people of Brussels. It was rebuilt in the 15th century only for the Spanish to wreck it in 1580. Again it was rebuilt and this time it was the turn of the French to raze it nearly to the ground in 1695. A hundred years later the Arconati Visconti family inherited what was left. For over a century it remained dilapidated. Eventually at the end of the 19th century the castle was completely renovated by the Marquise Marie Arconati Visconti and stocked with a vast collection of art and furniture. The castle is now a wonderful example of the Romantic view of architecture and interior design. When the Marquise died in 1923 it was taken over by the Belgian State and was turned into a museum.

The interior of the castle is intimate rather than grand, with numerous small rooms, each with their own delights. It’s renowned for its collection of Doornik tapestries, many of which are huge and take up whole walls. During the Flemish Renaissance in the 16th century, Doornik was one of the main centres for tapestry production in Europe. They were woven in wool and silk and were full of bright, contrasting colours. 500 years later the colours are still evident, as in the wonderfully detailed tapestry called the Gypsy Camp.

The Gallery is another room which captures and holds your attention. Worthy of admiration are the intricately carved wood panels, the white sandstone fireplace, the “lit de justice” — an armchair used by the French king — and a Spanish travelling trunk embellished with the scallop motif of Santiago de Compostela. On display is the Worship of the Kings by Pieter Coecke van Aelst, Bruegel’s teacher and eventual father-in-law.

Equally fascinating is the Marquise’s apartment, consisting of a bedroom, a bathroom and a guest room. It contains a painting of her husband on a dromedary, and herself dressed as a page. The many mirrors in the bathroom clearly indicate that the Marquise did not have Victorian scruples about seeing the naked body.

When you have finished your tour of the interior, the 50 hectare park awaits. It’s full of scenic walks through the woods and alongside the lake. It also contains the tea pavilion, the only building of its kind remaining in the Low Countries.

Garden lovers won’t be able to resist a visit to the castle’s 19th century museum garden. It recalls the era when Belgium was a European leader at creating new varieties of fruit tree, many of which were exported to the UK and elsewhere. Its vegetable plots and flower gardens are also laid out in authentic 19th century style.

To renew your energy reserves at the end of your day, three eateries by the car park should meet your needs: Brasserie Egmond, Oud Gaasbeek and [email protected] The latter two have play areas for children, including trampolines and play castles.

2 thoughts on “Gaasbeek Castle. Centuries of ravage and pillage”