Giant hogweed – and why to avoid it! 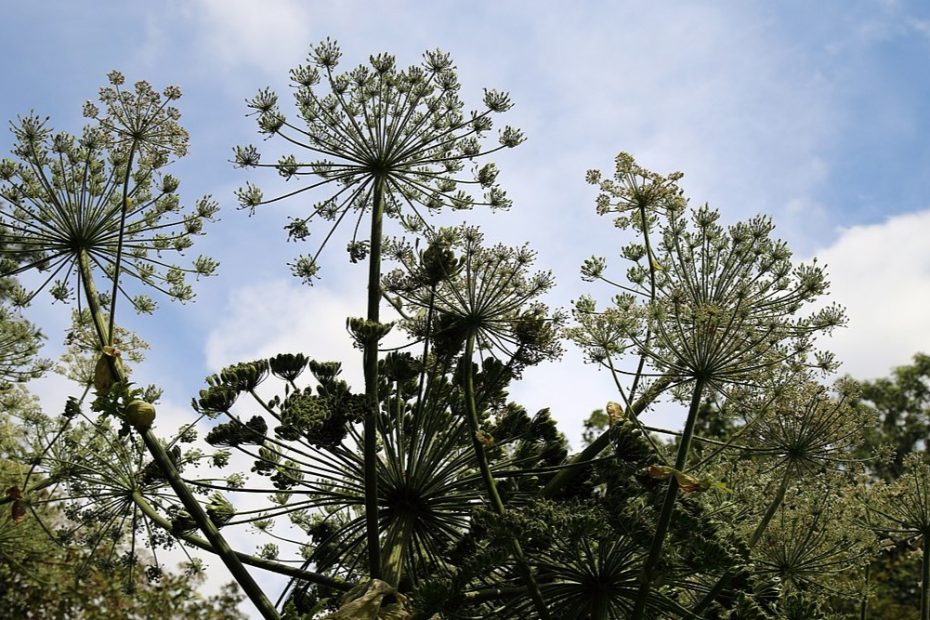 Giant hogweed plants are at their most impressive at this time of the year, reaching up to five meters tall. But please don’t touch them!

I was recently exploring the edges of a field near where I live when I came across a jungle of giant hogweed plants. As their sap can cause extremely nasty and painful blisters, I avoided getting too close to them. I also thought it would be good to warn readers to steer clear of giant hogweed too!

But first, here’s a quiz question to ponder while you read the post. The answer will be revealed later.

What is the connection between giant hogweed and the famous English drummer, singer-songwriter, record producer, and actor Phil Collins?

What is giant hogweed?

Giant hogweed (Heracleum mantegazzianum) is a plant in the Apiaceae family (previously known as the Umbelliferae). Don’t be put off by the Latin; this family includes well-known wild flowers such as cow parsley and wild carrot.

Where does the giant hogweed come from?

The giant hogweed isn’t native to Europe. Its home is central Asia and the Caucasus Mountains. But in the early 19th century it was brought to the UK and planted as an ornamental garden flower. It soon escaped, and found the UK’s soils and climate to its liking. It then hopped over the Channel and is now naturalized through much of Europe, including Belgium. It was also introduced to parts of the USA and Canada.

The leaves are different too. Cow parsley leaves are tripinnate, which means that the leaves are divided, and then those divisions are also divided. This gives quite a feathery appearance. The leaves of giant hogweed are huge – they can be 2 or 3 meters long. They are irregularly shaped, and have very sharp or jagged edges. The underside of the leaves is hairy.

The stems of the giant hogweed are usually green, with purple blotches and stiff, white, bristly hairs.

Basically, if you are walking along and need to look upwards at something that looks like cow parsley – it’s giant hogweed.

Why you need to avoid touching giant hogweed

The sap of the giant hogweed contains a substance called furocoumarin. This makes skin extremely sensitive to sunlight, a phenomenon called phytophotodermatitis. If the sap gets onto your skin, and then the skin is exposed to sunlight, you will feel a painful burning sensation. The skin may blister badly. I’m not going to include any photos here, but if you click this link you’ll get the message. (Not for the squeamish).

What should you do if you touch giant hogweed?

If you think you have got giant hogweed sap on your skin – for example when you are out walking – three things need to be done. Thoroughly wash the area with water as soon as you can. At the same time, try to protect the area from the sun’s rays. You are then advised to seek medical advice.

The best thing to do to avoid injury is to familiarize yourself with the plant and don’t go anywhere near it.

What’s the link between giant hogweed and Phil Collins?

Have you worked out the answer? You probably have to be of a certain generation, and with a certain interest in rock music. Phil Collins was drummer of the great rock band Genesis. One of the tracks on their 1971 Nursery Cryme album is entitled “The Return of the Giant Hogweed.”

The lyrics cleverly tell the story of the discovery of the plant in Russia and its “capture” by a botanist who brought it to Kew Gardens. It describes the plant’s toxicity, although then humorously suggests the plant is planning to take over the human race. This suggests a nod to the 1951 novel “The Day of the Triffids.”

Here’s the track, and the lyrics are underneath:

“The Return of the Giant Hogweed” – Genesis

Turn and run!
Nothing can stop them
Around every river and canal their power is growing
Stamp them out!
We must destroy them
They infiltrate each city with their thick dark warning odour
They are invincible
They seem immune to all our herbicidal battering

Botanical creature stirs! Seeking revenge…
Royal beast did not forget
He came home to London
And made a present of the Hogweed
To the Royal Gardens at Kew

Waste no time!
They are approaching
Hurry now, we must protect ourselves and find some shelter
Strike by night!
They are defenceless
They all need the sun to photosensitize their venom
Still they’re invincible
Still they’re immune to all our herbicidal battering

Mighty Hogweed is avenged!
Human bodies soon will know our anger
Kill them with your Hogweed hairs!
Heracleum Mantegazziani

Add your email below to get new posts directly into your inbox: