I’ve visited and written about many different museums in Belgium, from cheese to tobacco; lace to glass; the Romans to draft horses. But I have to admit that Goalmine football museum in Genk has been one of the most fun to visit.

Of course, to get the most out of a football museum it helps to be interested in football in the first place. But I am sure that people with only a passing interest in the beautiful game could spend an hour in Goalmine and come out smiling. 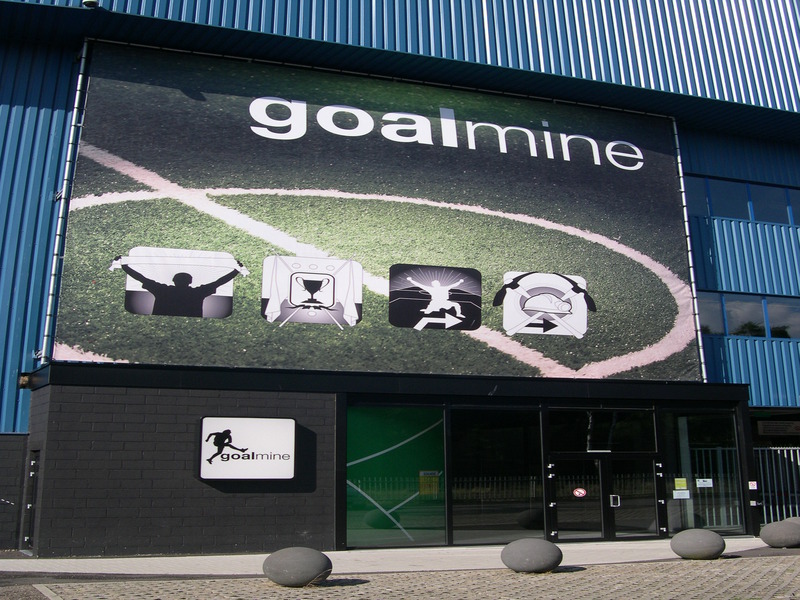 A focus of Goalmine is the history and achievements of current Belgian champions Racing Genk, who in their short history have won both the Belgian Pro-League and the Belgian Cup three times. The museum is actually part of the stadium. 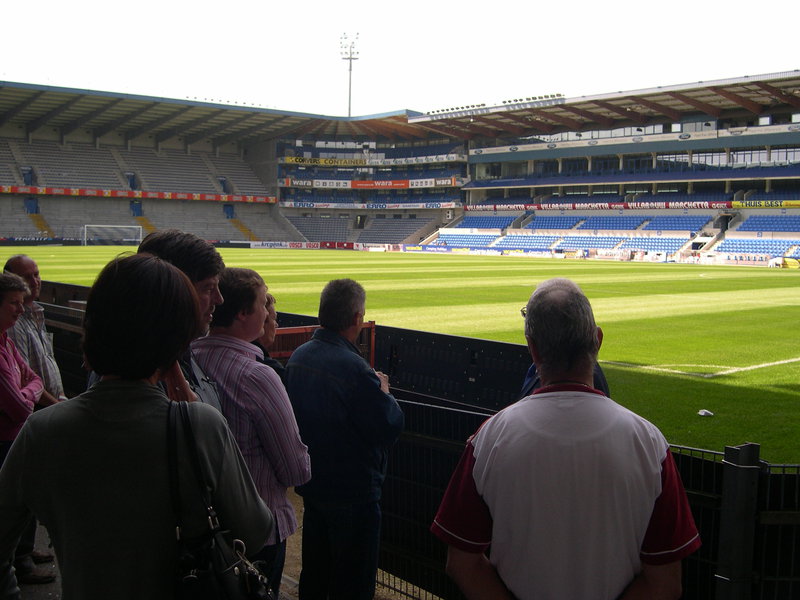 Your Goalmine experience starts by reliving these famous wins with a short movie in the small cinema. Here you can sit back, soak up the atmosphere and experience the joys of the supporters as they celebrate these triumphs. The video culminates with the goal by substitute Kennedy Nwanganga in Racing Genk’s 1-1 draw against Standard LiÃ¨ge when they last won the Belgian championship in 2011.

And of course there is no comparison, because these monochrome photos are not of professional footballers but professional coal miners, who only laced their boots and donned their kits on Saturday afternoons to relax. Every coal mine in Limburg had its own football team: there were seven in the area at the peak of the Flemish coal mining industry. The two most successful ones — KFC Winterslag and Waterschei Thor — merged in 1988 to form Racing Genk.

Interesting fact: the glass museum cases were originally the cabinets in the changing rooms of the mines where the miners could hang their outdoor clothes before changing into their working clothes. 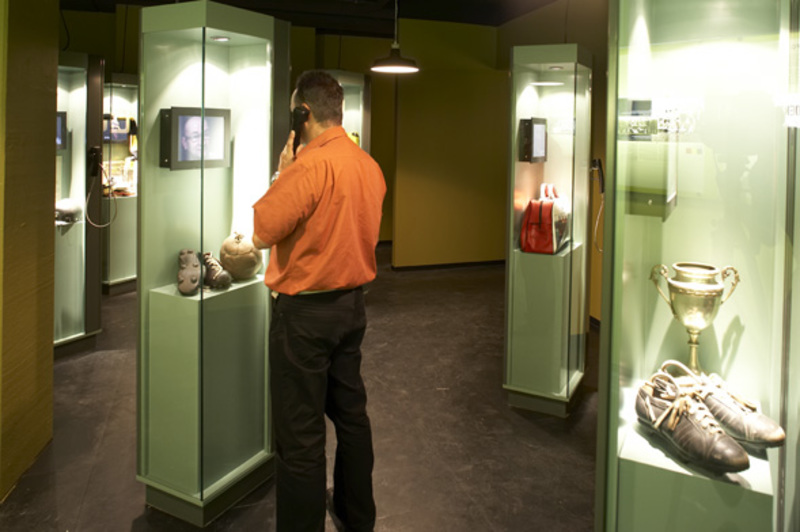 Then it’s time to jog down the players’ tunnel, with the sounds of adoring fans rising until you step out onto a small artificial pitch. Behind one goal is a video screen with another 10-minute movie on the big stories surrounding football, such as Maradona and his cocaine habit, and the ups and downs of that most precarious occupation, the football coach.

The physiotherapy room is next, where you can touch selected parts of a (dummy!) footballer, such as his head, knee, ankle, hand etc., and watch eye-watering video clips of how injuries to these parts of the body can occur during a game. 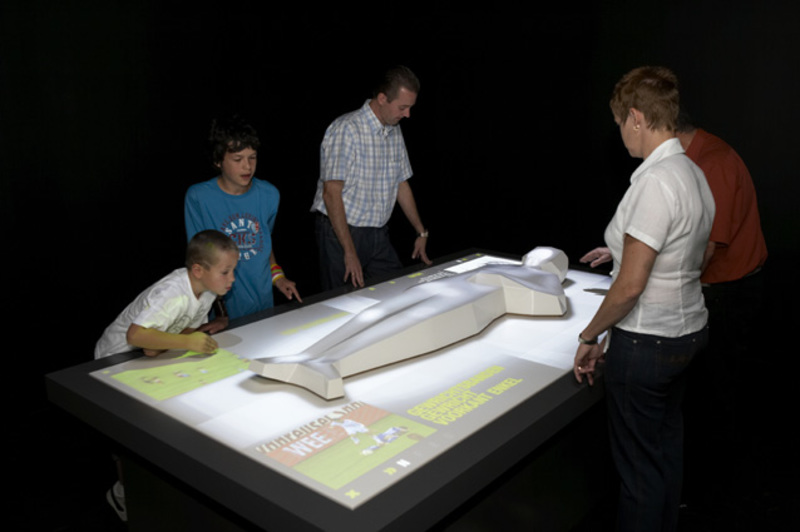 You can also get comprehensive medical information on particular injuries. Haven’t you always wanted to know where David Beckham’s anterior cruciate ligament is, how it tore and why the recovery period was so long?

The fun — and the education — continues with a speed quiz on the rules of football. 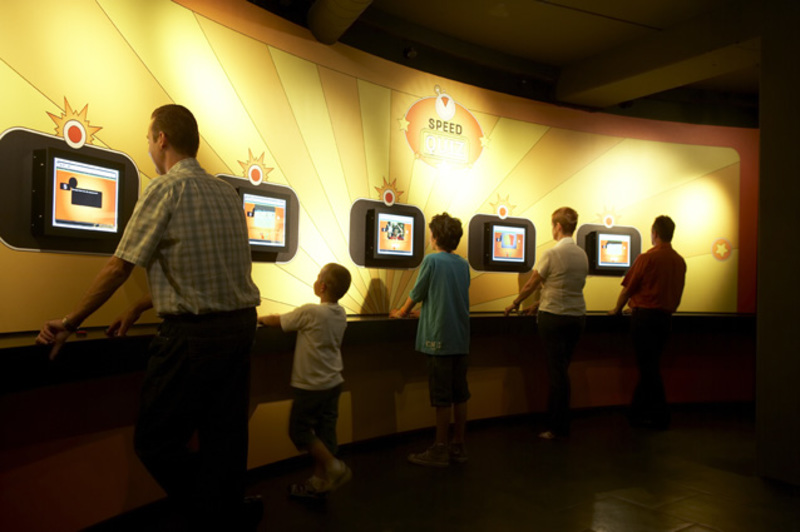 You can then take a picture of yourself dressed up as a crazy Racing Genk supporter and see it on the website when you get home.

You can also follow the history of football, from its earliest beginnings involving an inflated pig’s bladder, through to the appearance of goal-line technology, and a special display on the ten largest football stadia in the world. 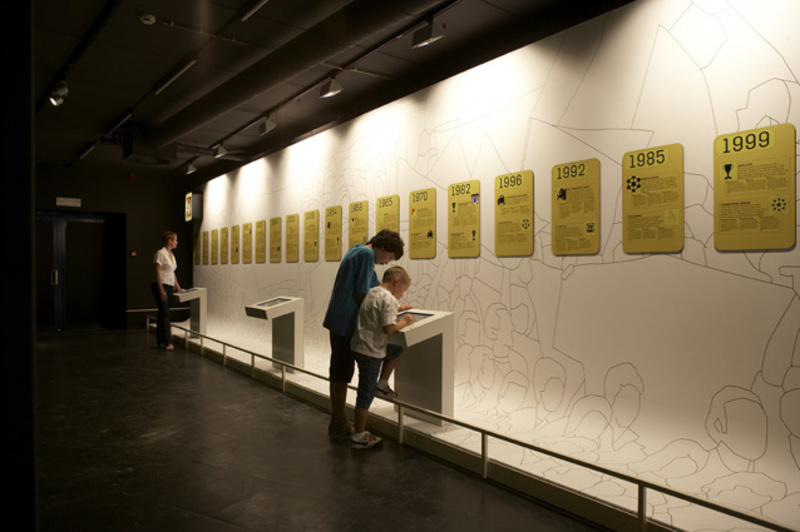 It’s fascinating is to discover how many personnel are involved during a top match at Racing Genk’s stadium, the Cristal Arena. These include 120 policemen, 540 cooks, waiters and bar staff, 35 Red Cross workers, and 31 “toilet ladies”. 4000 snacks will be consumed, to be washed down by 12,500 litres of beer.

Finally, there is a penalty competition which involves a video screen of Racing Genk’s goalkeeper, standing between the sticks, and an illuminated disc on the ground. You step up, kick through the disc as if it were a football, and watch the goalie save it, or not. You even get a slow motion action replay. It’s surprisingly addictive. I was fairly useless at taking penalties, I have to admit. 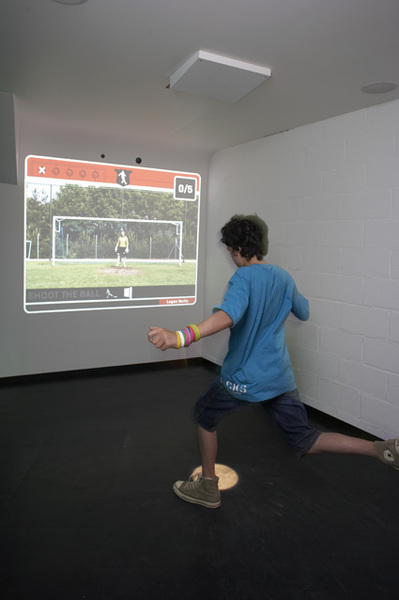 The final neat touch about Goalmine is displayed in the entrance lobby: the 2010-11 Jupiler Pro League Championship Cup, with Racing Genk’s name proudly engraved on it. I thought it was a replica, but it isn’t; it’s the real thing. So you can touch it, be photographed with it, even kiss it if you like that sort of thing. I didn’t go that far, but was tempted to go back and try one more time at the penalty game.