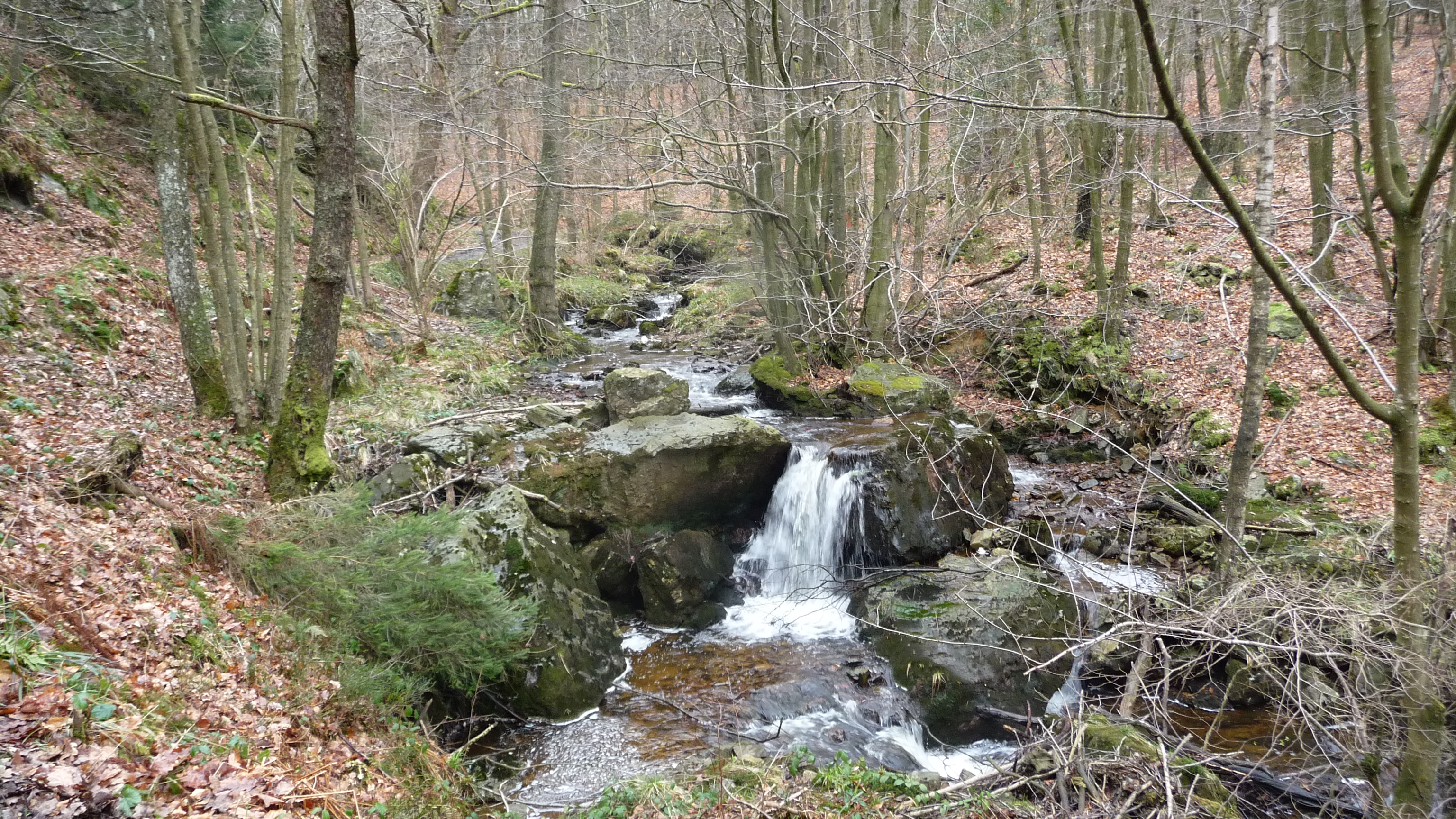 I completed the 2nd and 3rd stages of the GR 571 over a weekend; this blog post deals with just the 2nd stage with the overnight stop in Stoumont, after which I continued on the 3rd stage to Trois-Ponts.

Here is the starting point: 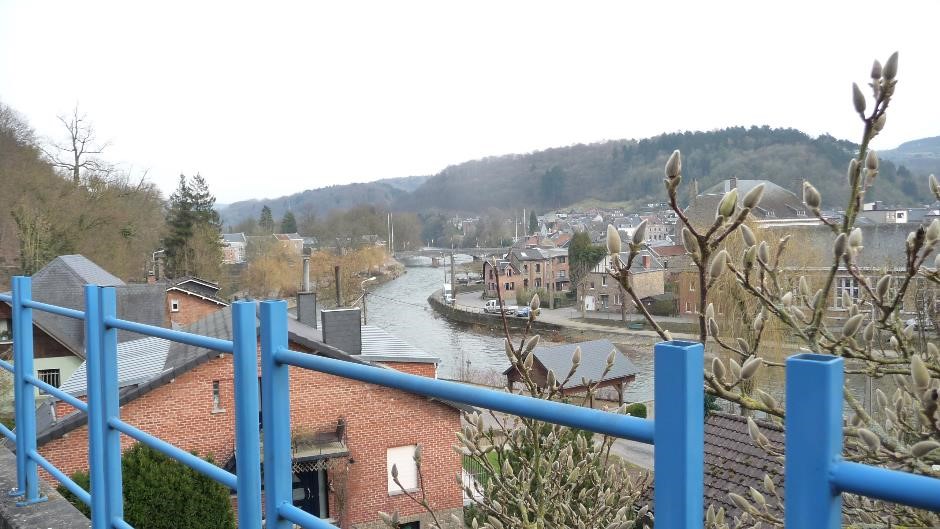 It’s easy to reach by car or train. I took the train from my home town to Leuven, and then to LiÃ¨ge where I caught the train heading to Luxembourg, which stops at Aywaille. If you buy a Rail Pass the return journey (from any station in Belgium) costs just 15.20 EUR, which I think is good value as well as environmentally-friendly. And for that I get an hour-and-a-half of relaxation and reading, and arrive fresh and ready to start walking.

Which is just as well because as with stage 1, the GR ascends quickly and steeply from the river valley up onto the hills, so I was soon struggling for breath. 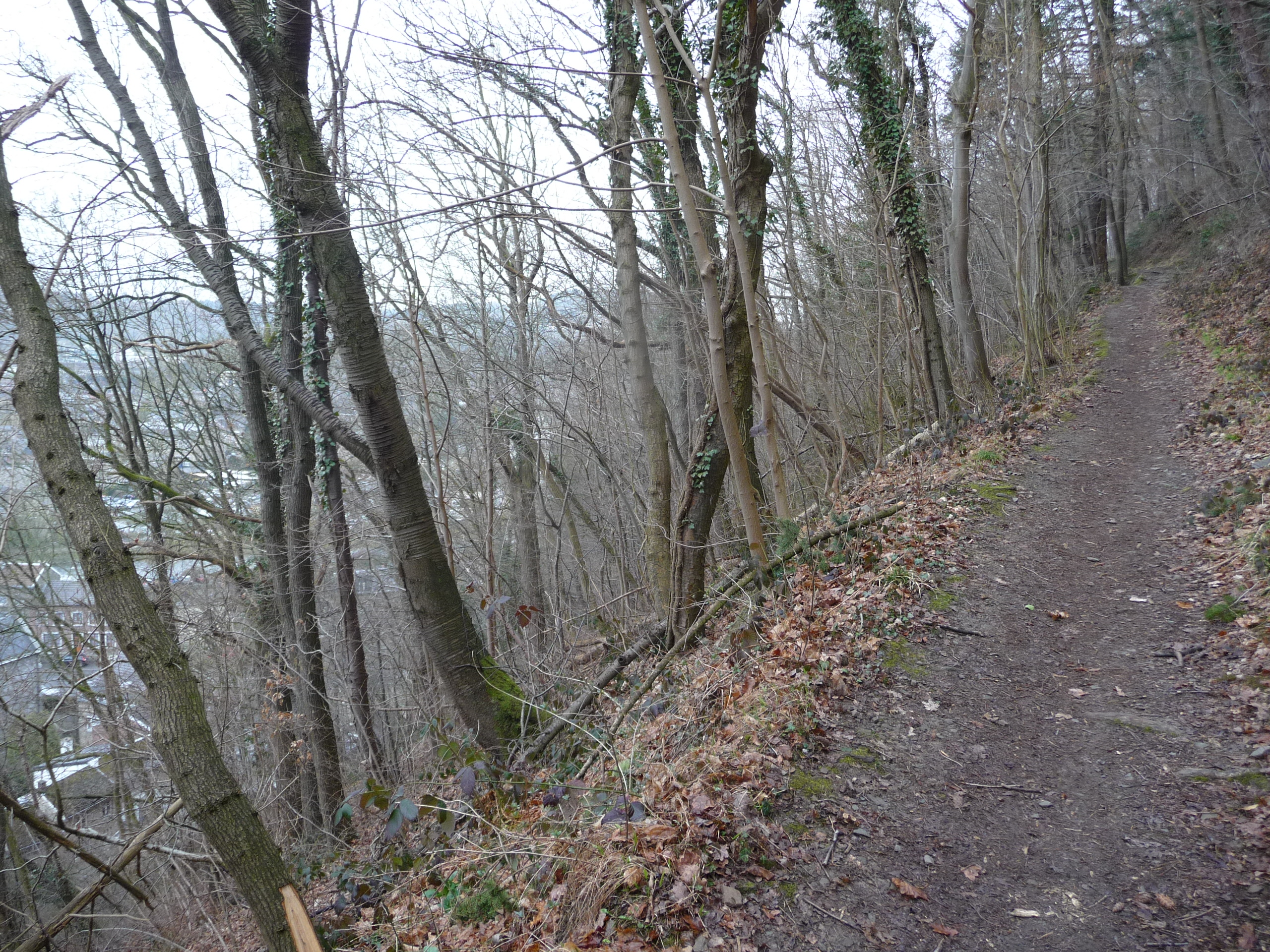 Thankfully there was bench at the top. 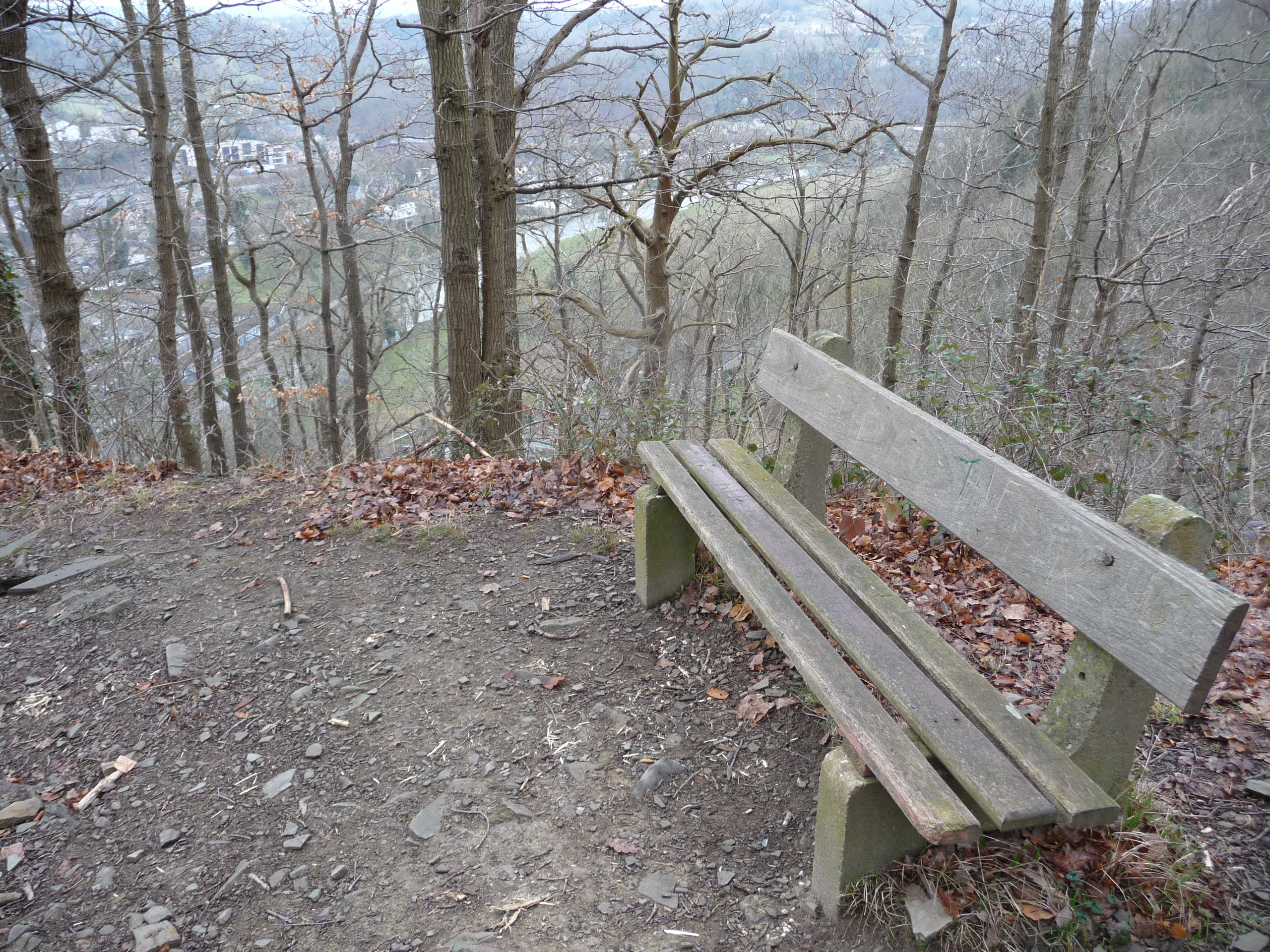 Once I had got my breath back, the walk continues along the top of the ridge with some great views of where I was heading. 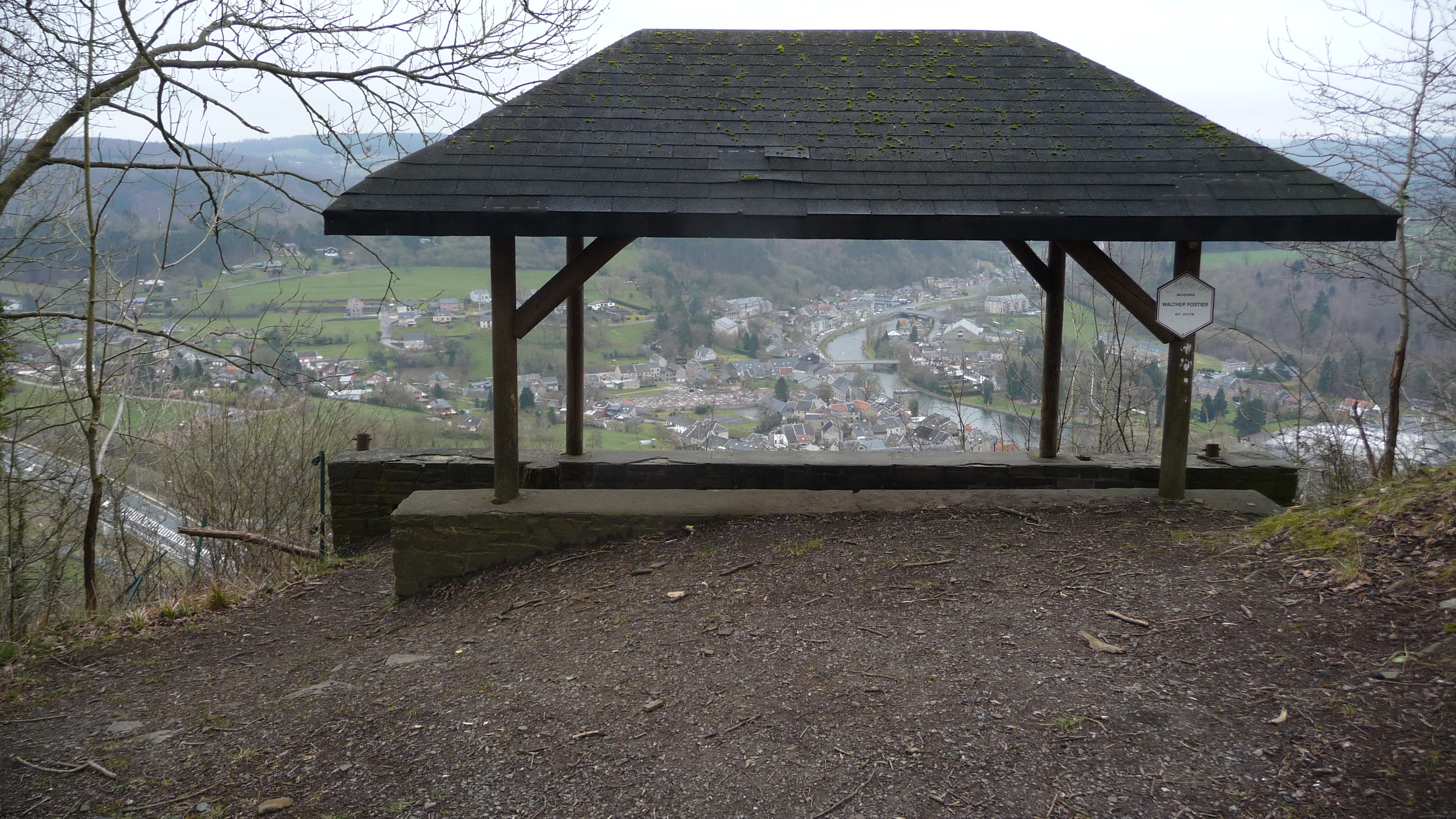 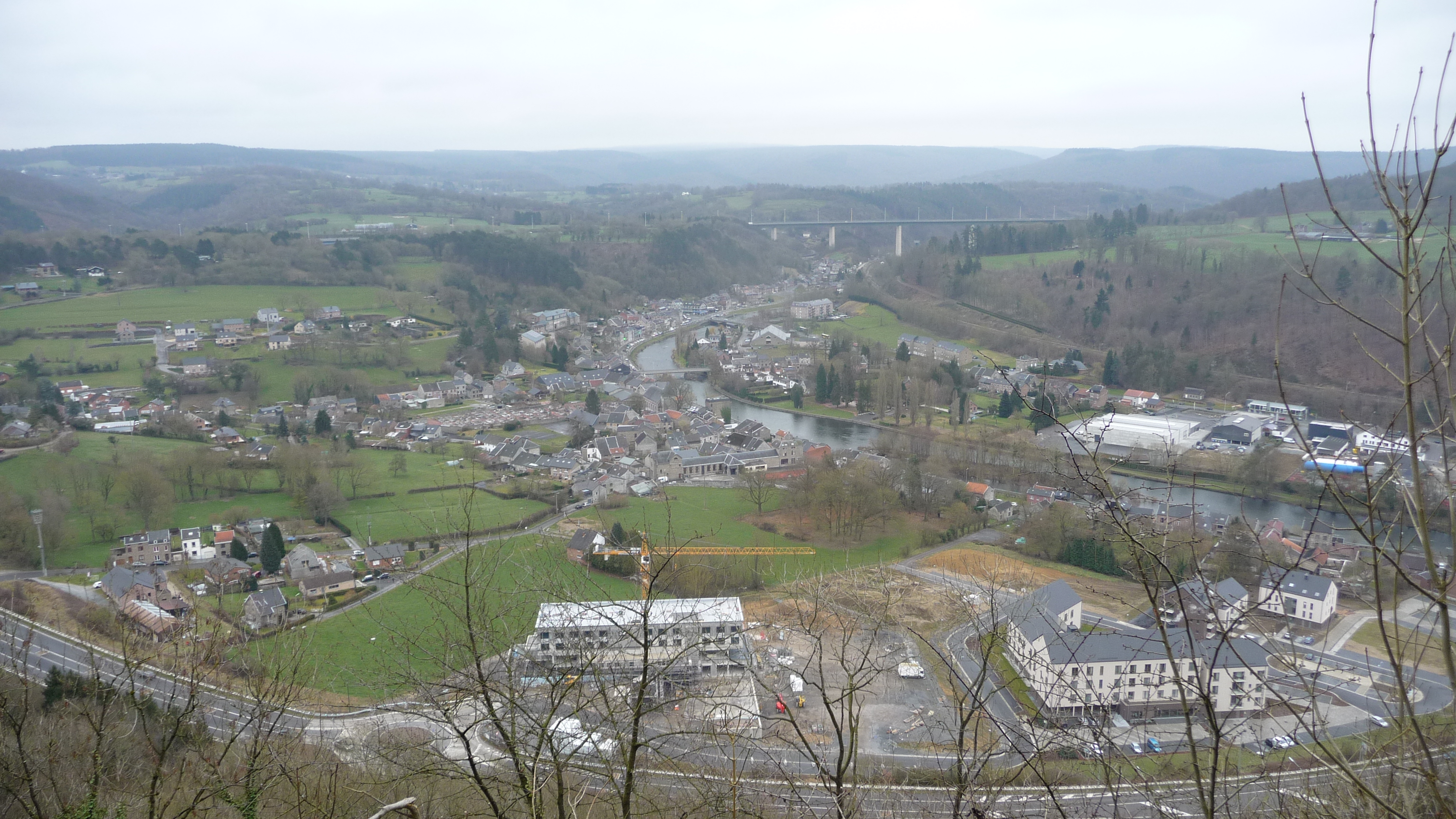 You’ve probably noticed something already by its absence: the sun! Yes, the whole weekend was dull and grey, with low, thick cloud and not even a hint of sunshine. It was also very cold, hovering around 5Â°C. Still, it was dry, which was the main thing. But don’t expect gorgeous pictures of blue sky, because there wasn’t any!

As this area saw a lot of action during the Second World War, there were quite a few memorials and plaques commemorating various battles.

Despite the cold dull weather, as I picked up the pace I really enjoyed myself. And there was plenty of company along the way:

The first village I passed through was Sougne: 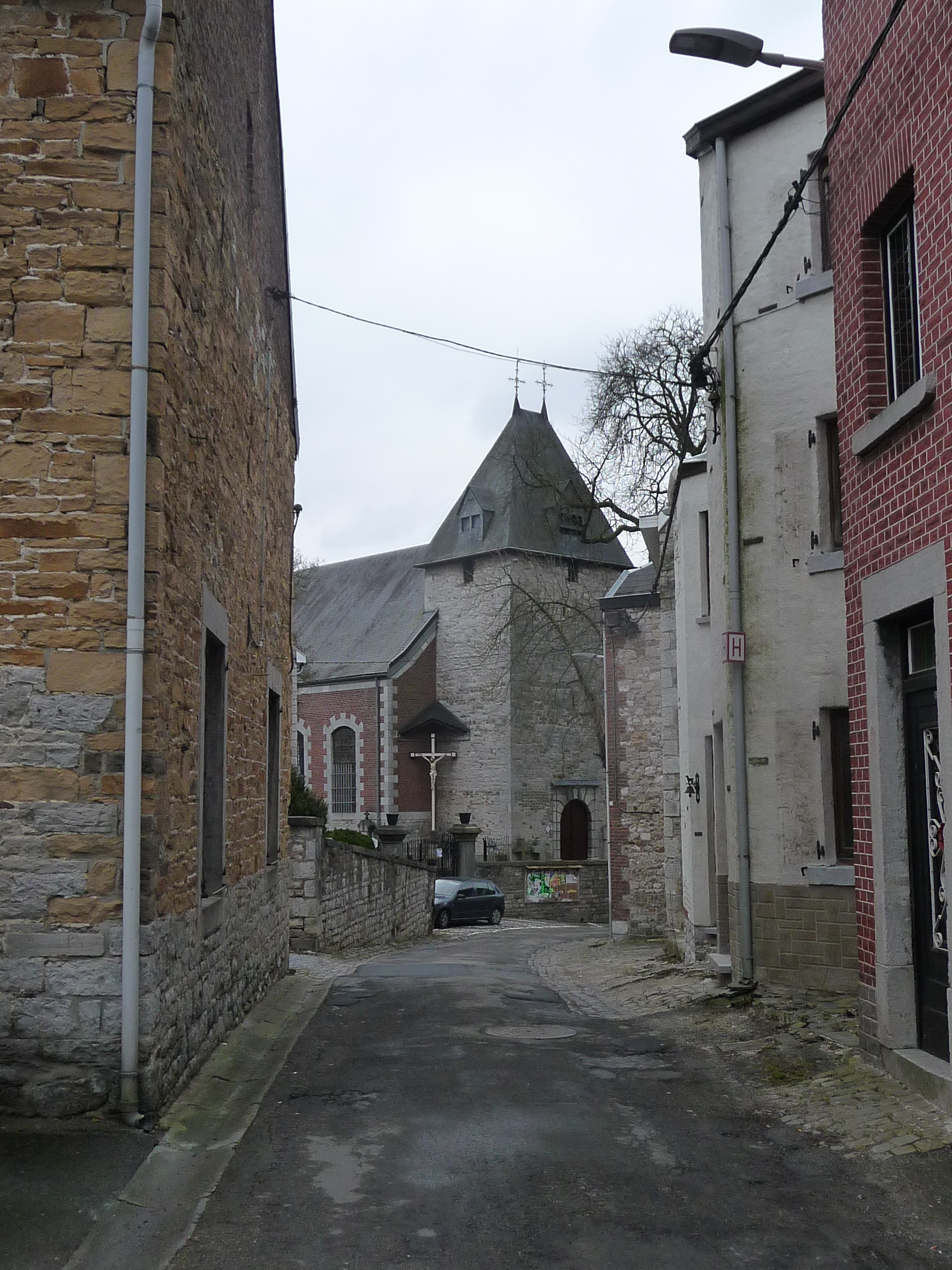 And then Remouchamps, with its underground caves to visit, if you want to break your walk (I didn’t): 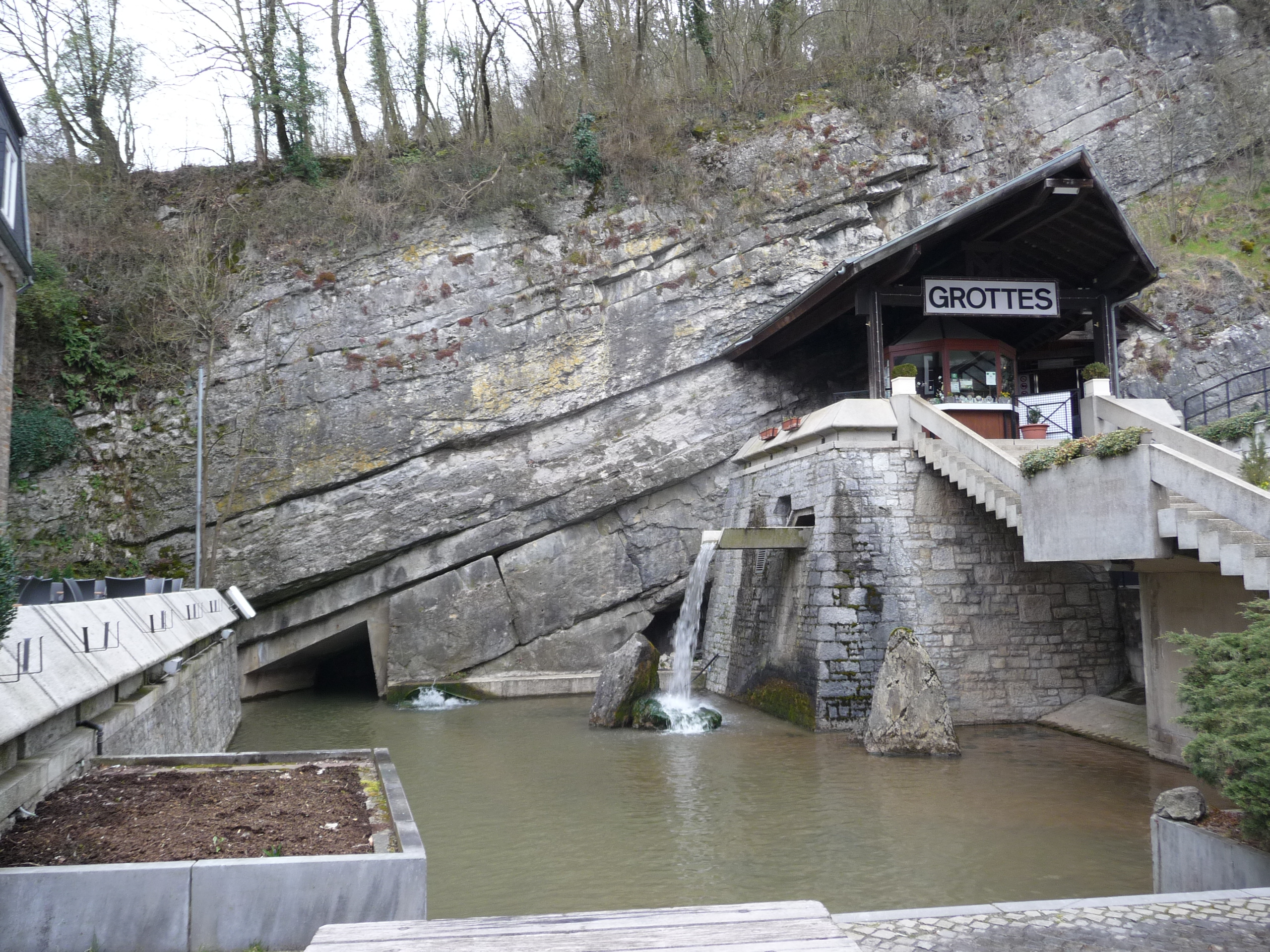 Then it was time to descend through some lovely woods, which will look even lovelier in the spring when the leaves are on the trees, 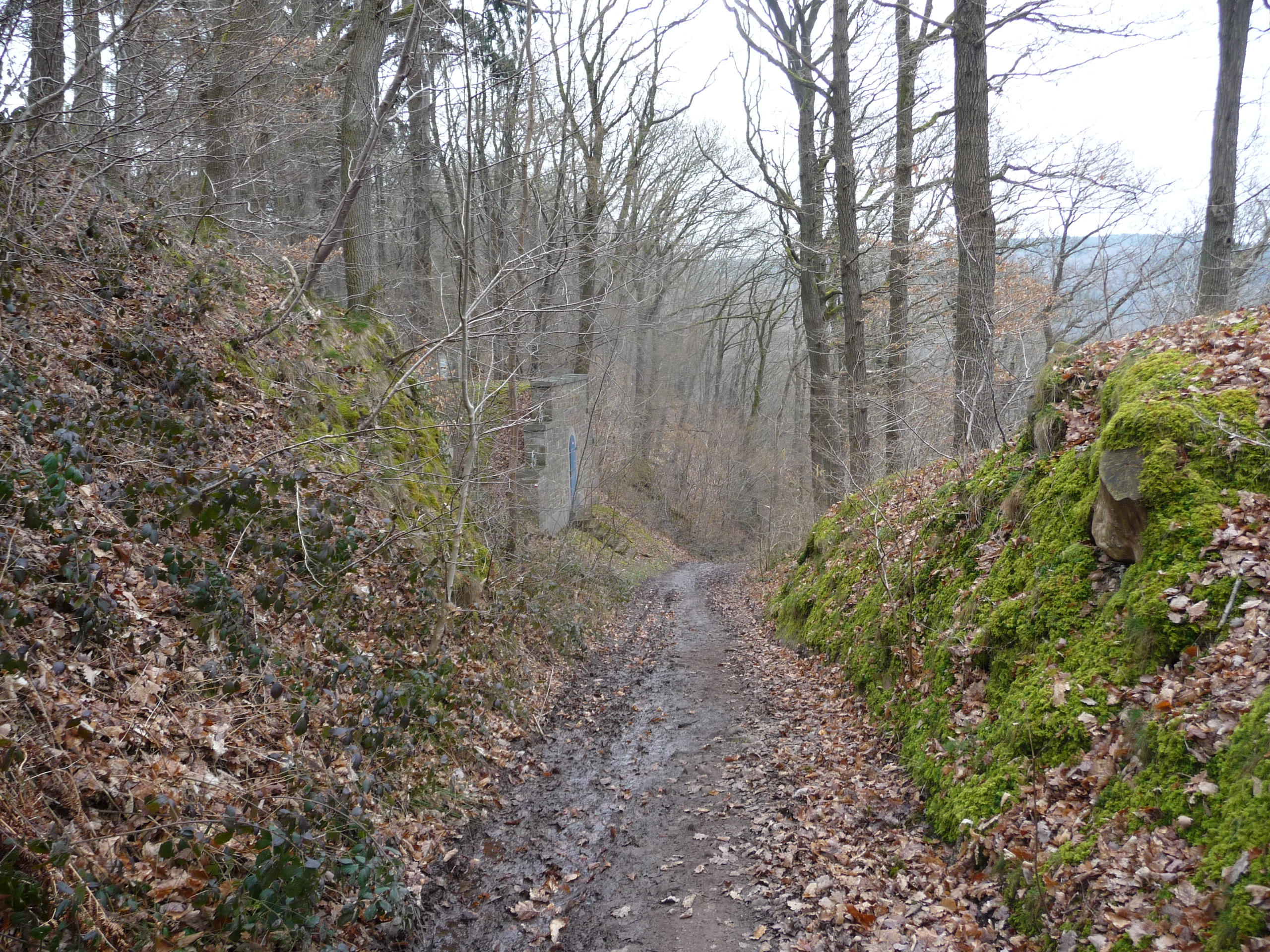 and to the junction of the GR 571 with the GR 15 at the wonderfully named Ninglinspo. 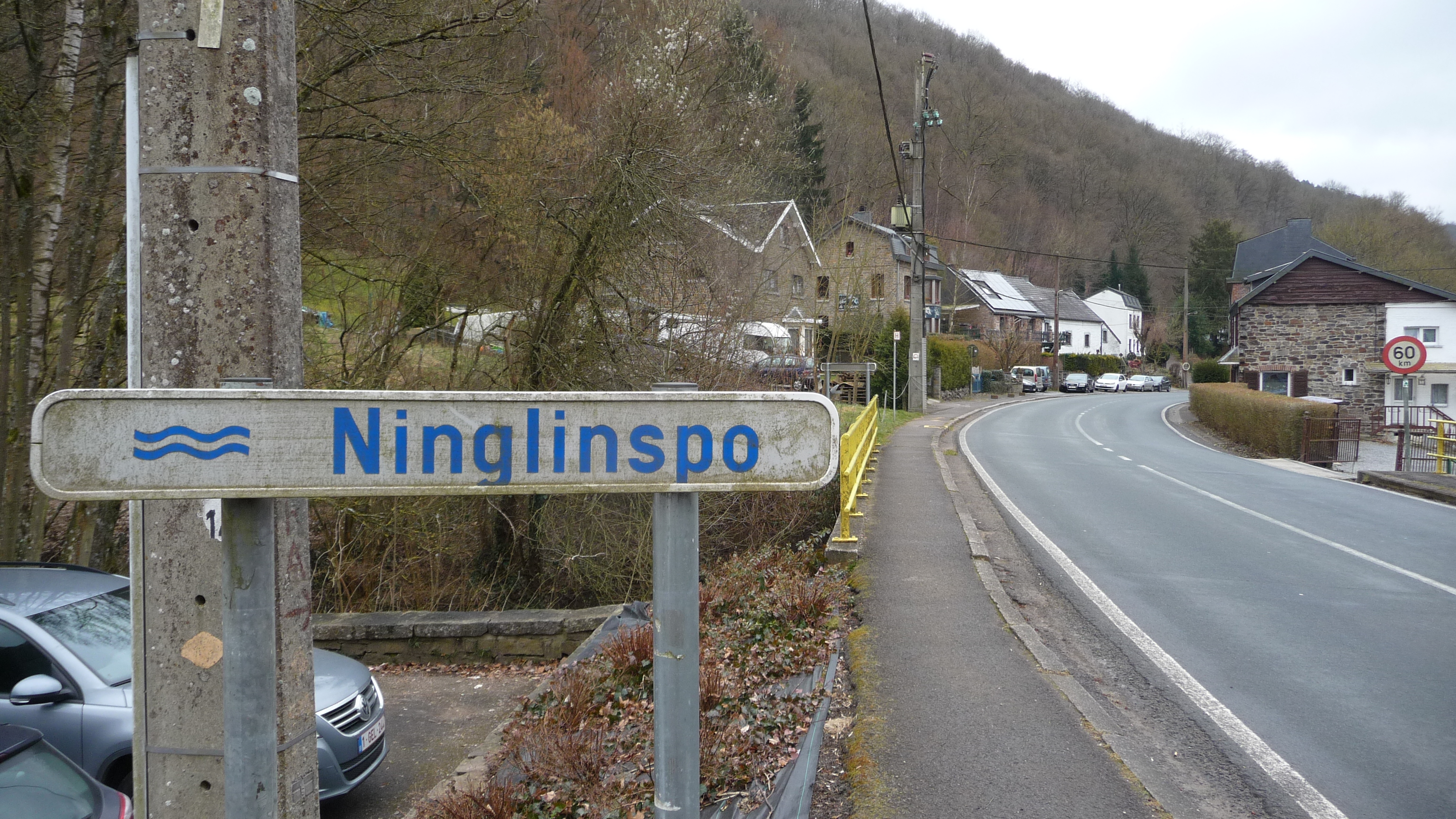 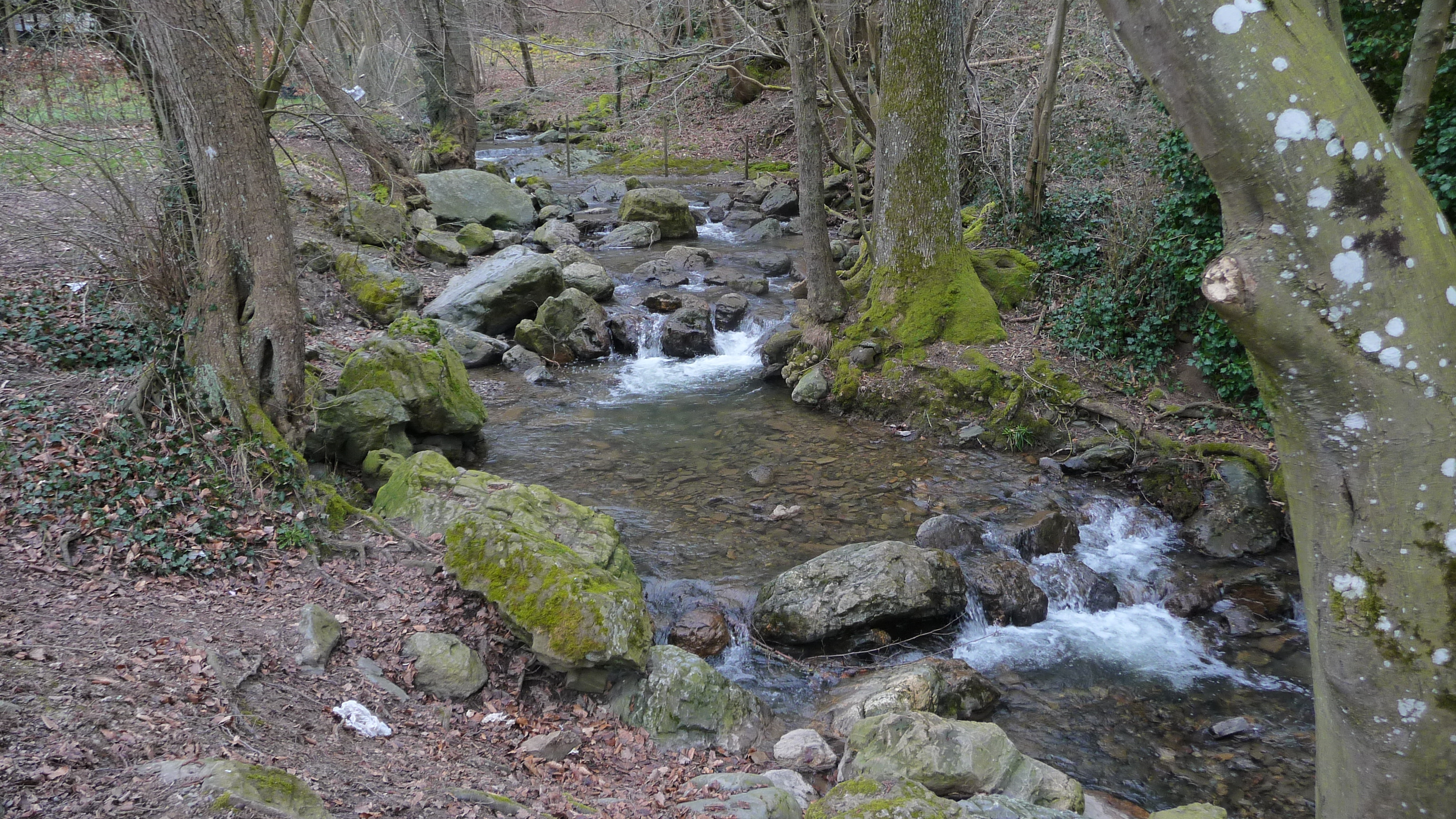 Here I remembered the good advice of my blogging/walking friend Guido, who warned me that when two GRs cross, make sure you follow the correct set of red-and-white signs!

Having made sure I was on the GR 571 and not the GR 15, the path followed the AmblÃ¨ve to the Fonds de Quareux. These are huge blocks of quartzite which almost, but not quite, block the river. 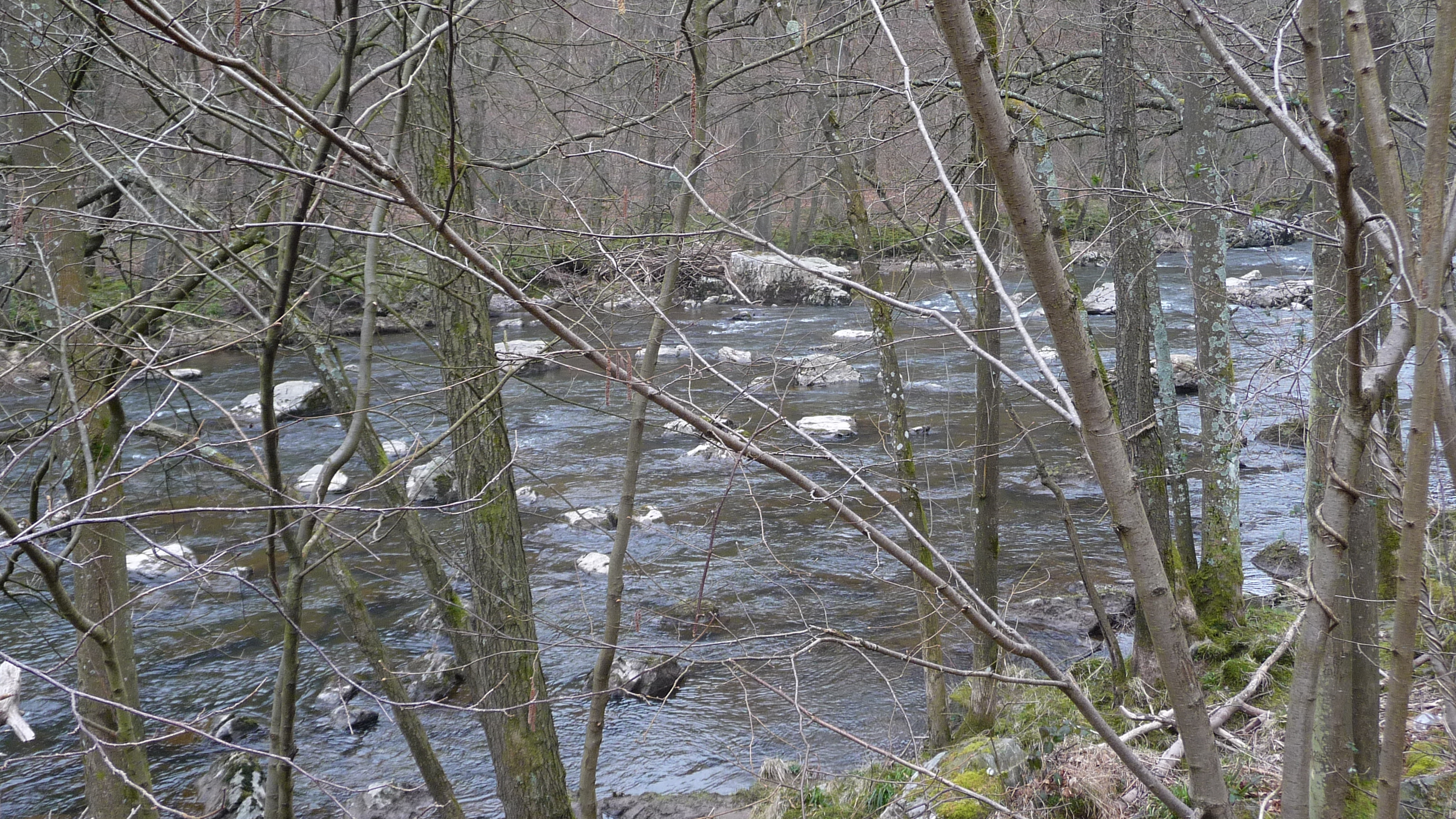 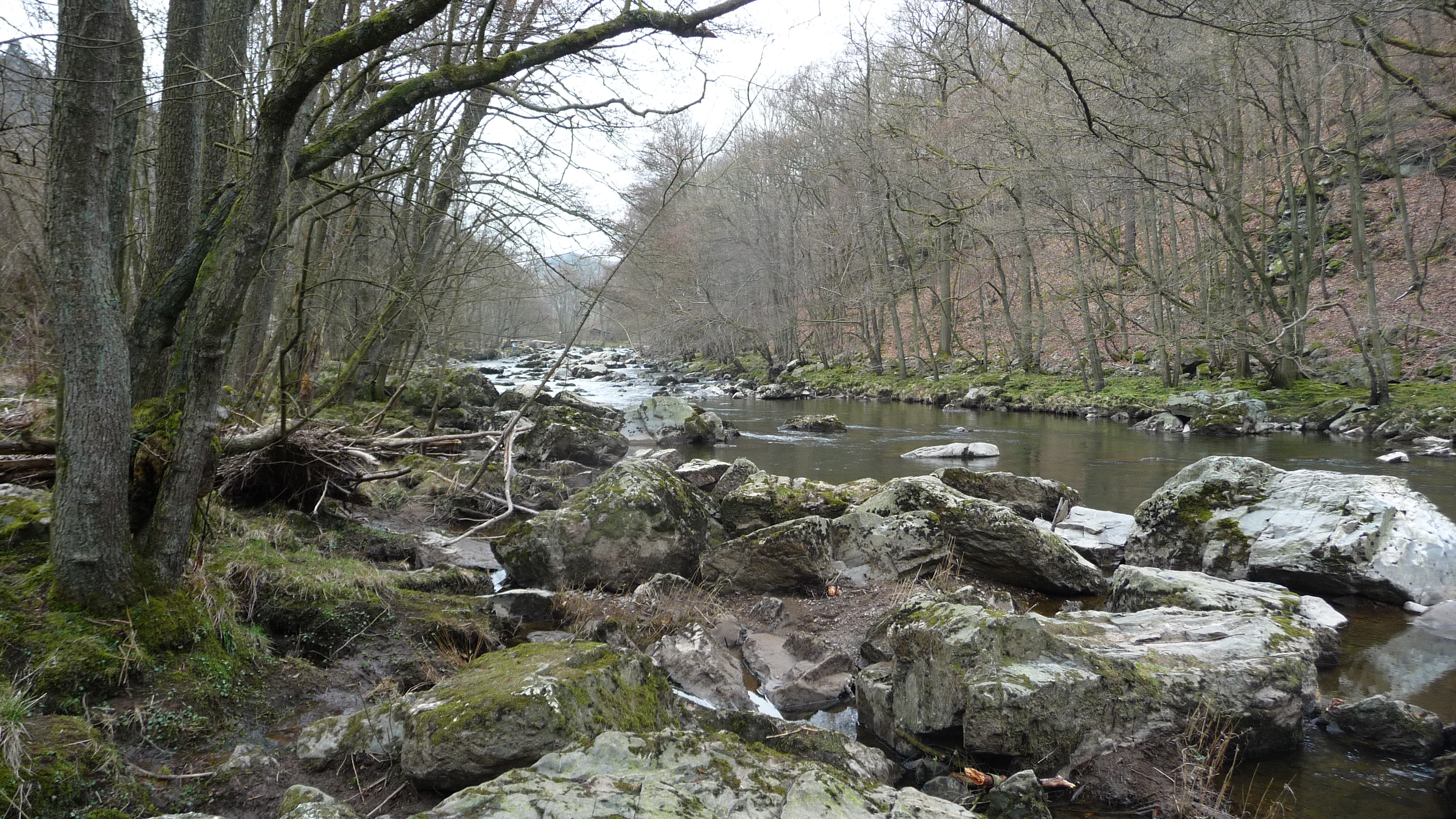 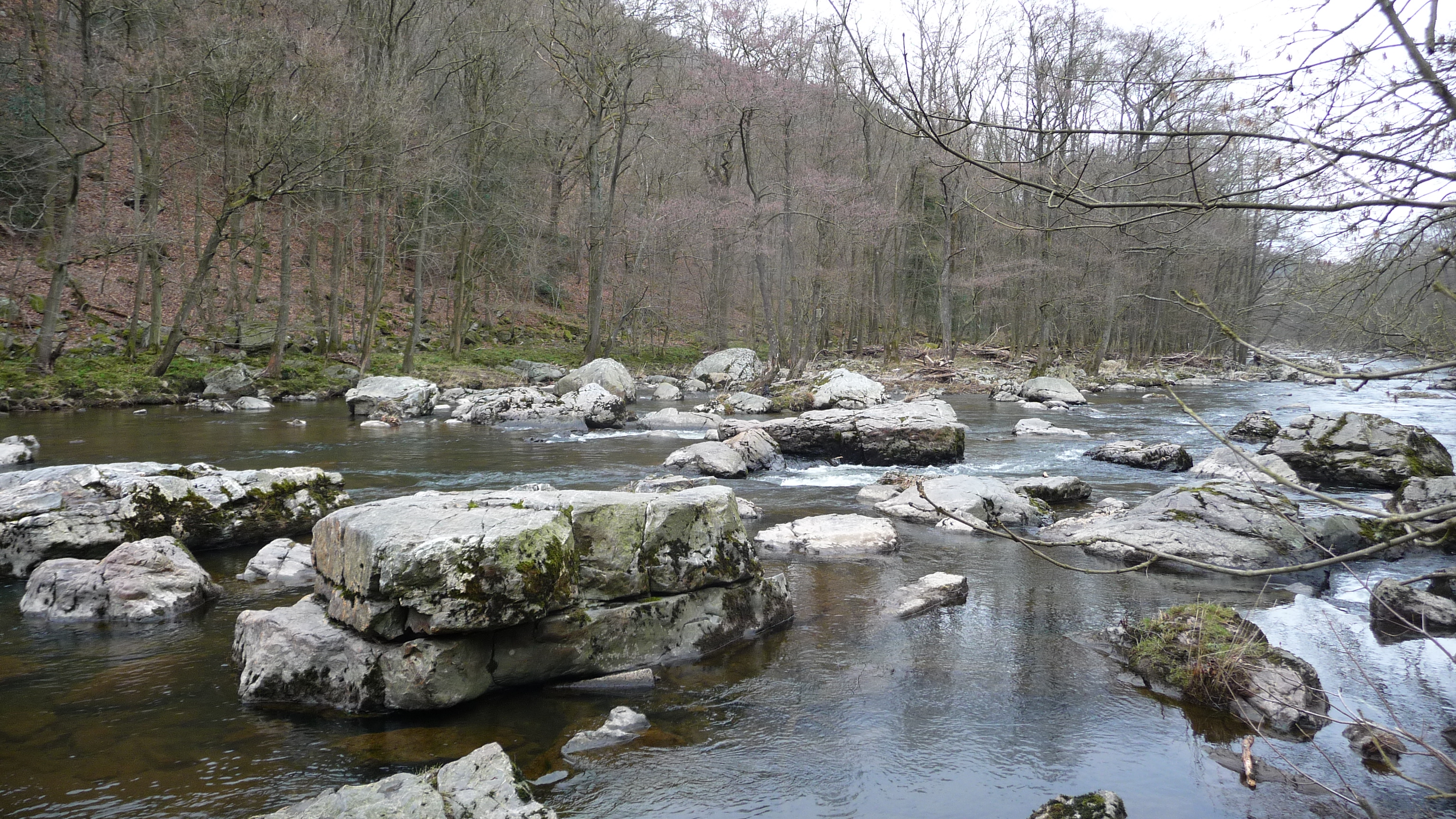 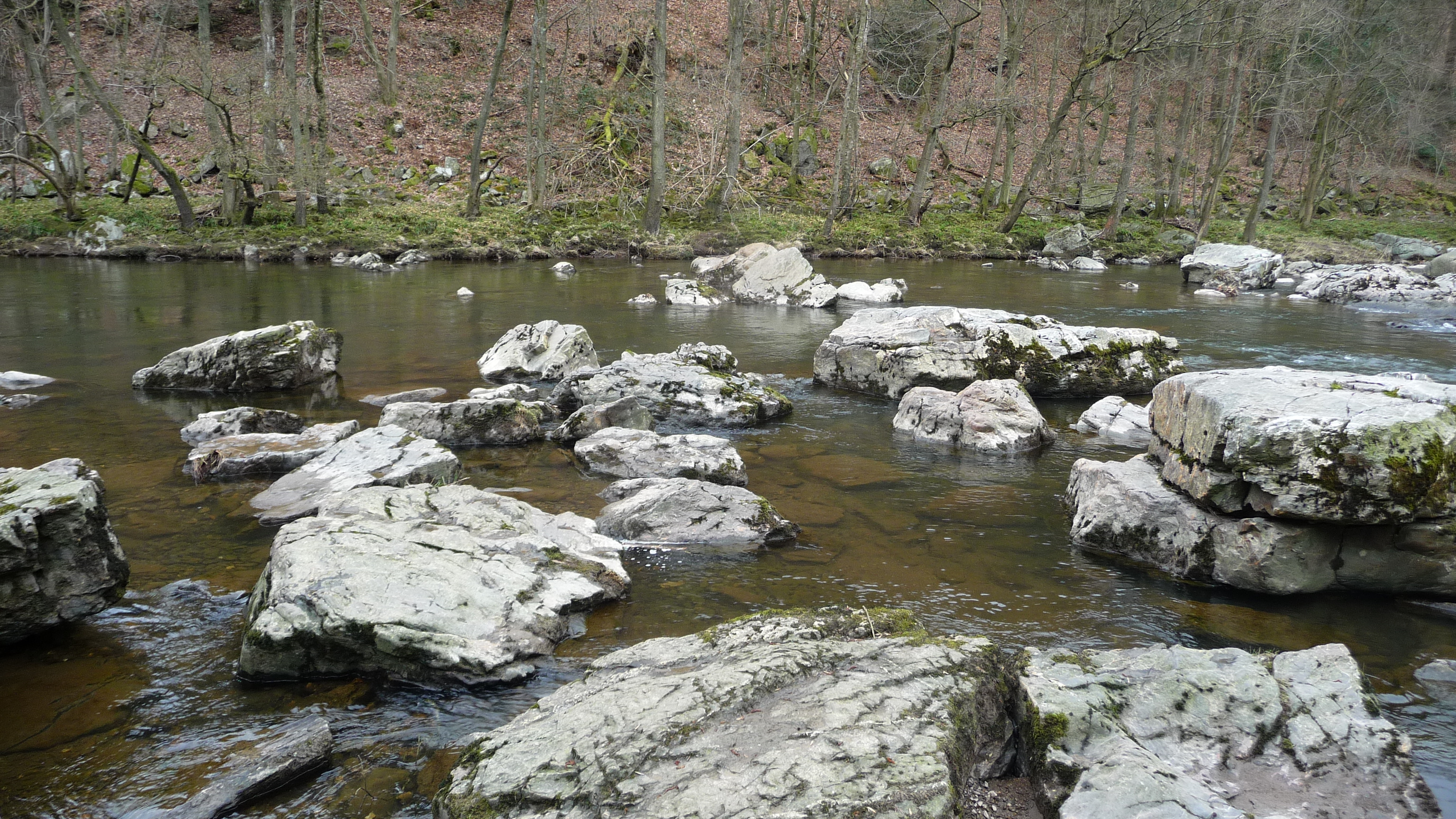 The local legend is that the miller of the Fonds de Quarreux sold his soul to the Devil to get the wonderful mill he was dreaming about. But his wife refused to play along and tried to save his soul. The mill wheels didn’t start turning, and the Devil was very angry, destroyed the mill, and caused blocks of stones to fall down the mountain into the AmblÃ¨ve.

After the Fonds, the GR 571 leaves the AmblÃ¨ve and climbs relentlessly upwards along the valley of the Chefna. This was a particularly glorious part of the walk. The Chefna was in full flow after the winter’s rains and snow, and it was highly picturesque as it cascaded down the hillside.

However … the path crossed from one side of the river to the other, which necessitated crossing some rather precarious footbridges! One of them was so slanting and wet that I decided not to walk across, but crawl from one side to the other!

I was quite pleased when I finally came across a more sturdily built footbridge! 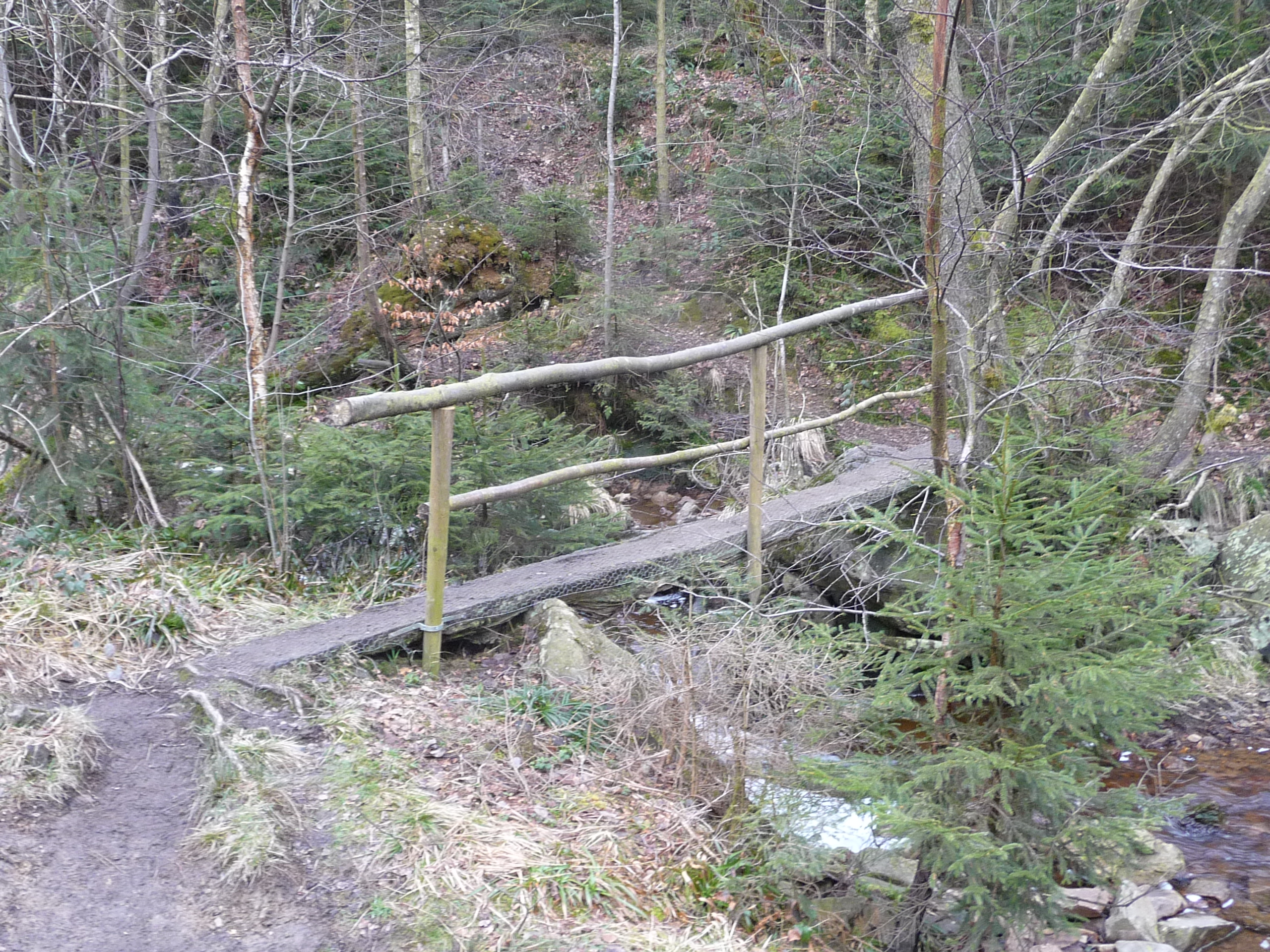 As I got higher and higher, through the trees I glimpsed a surprising sight that I had not expected. 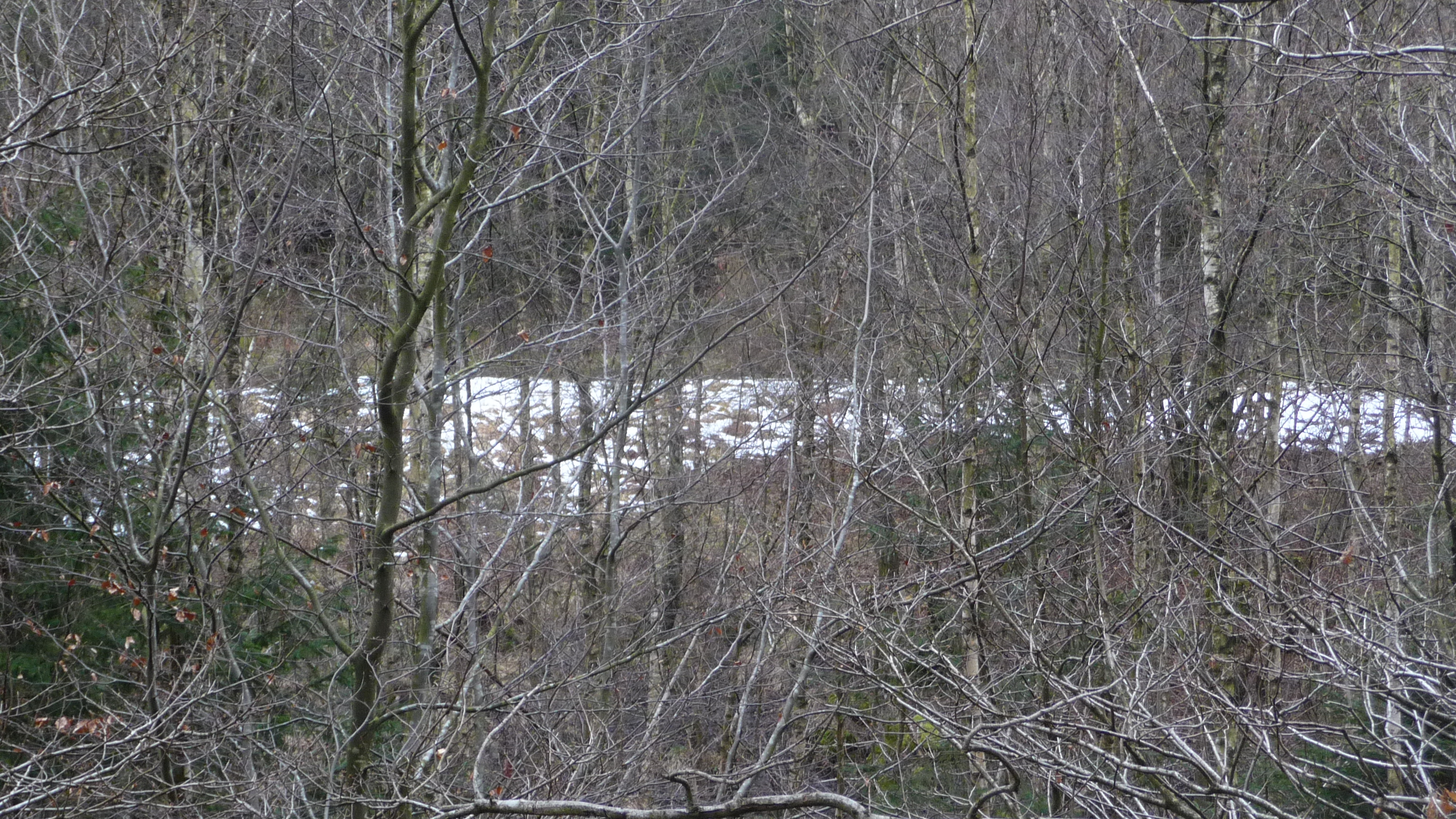 No it’s not a carpet of spring snowdrops, but of snow: 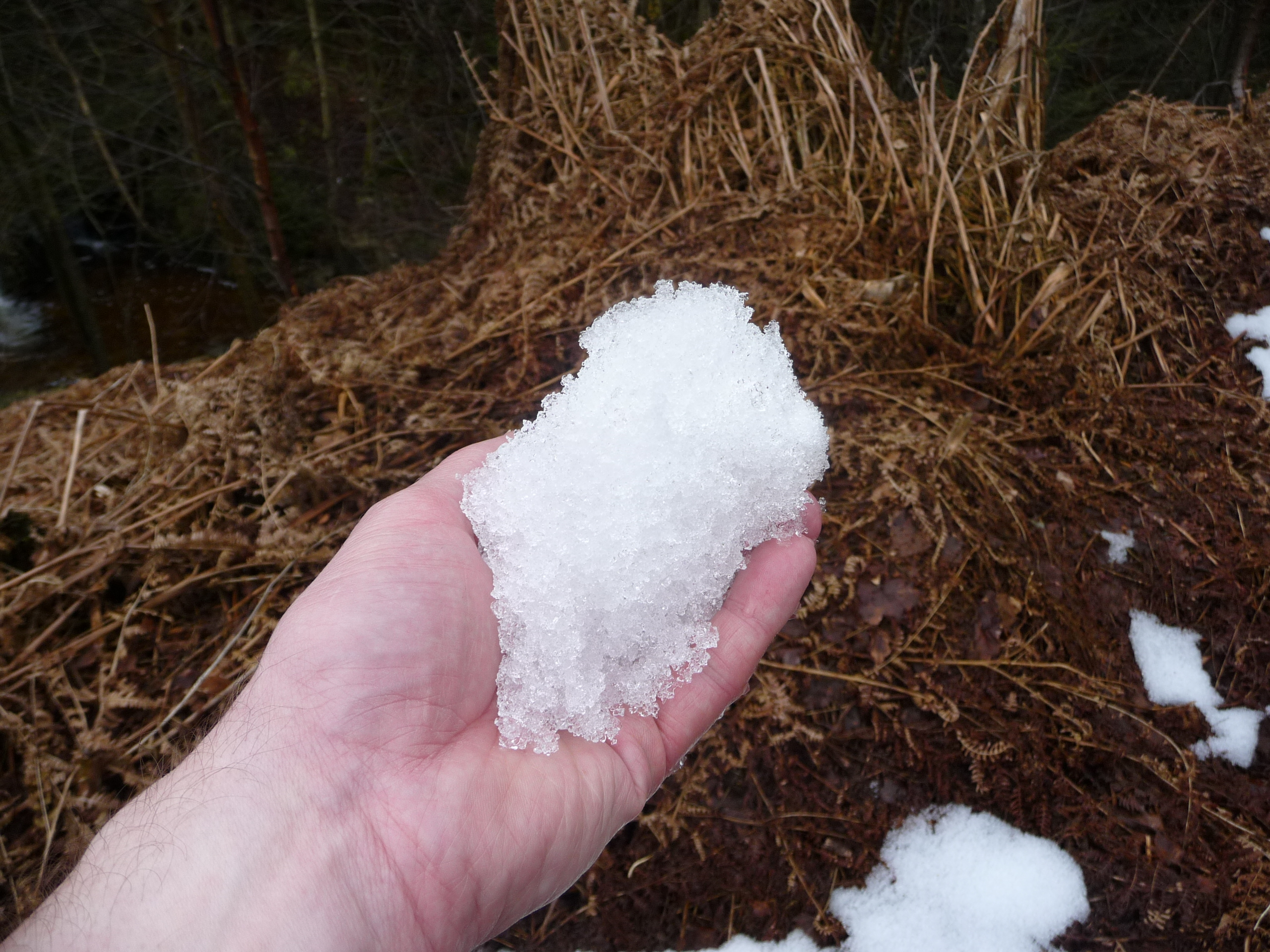 Where I live in Flanders, we had not had any snow this winter, and I didn’t think Wallonia had either. How wrong I was!

Leaving the trees behind, I was now on the top of the Hautes Fagnes, the high moors: cold, barren, wild, windy and wet, yet totally invigorating: 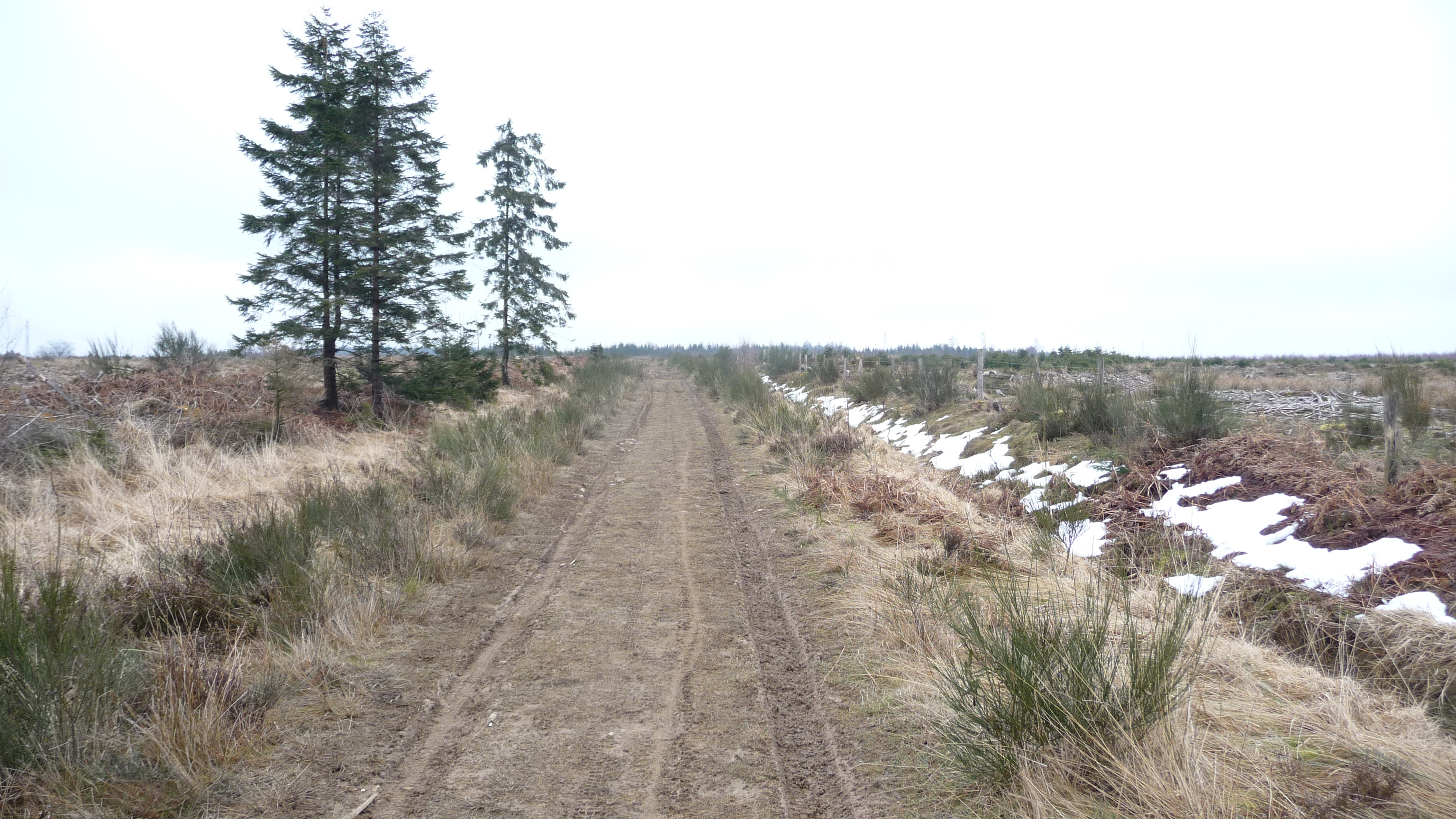 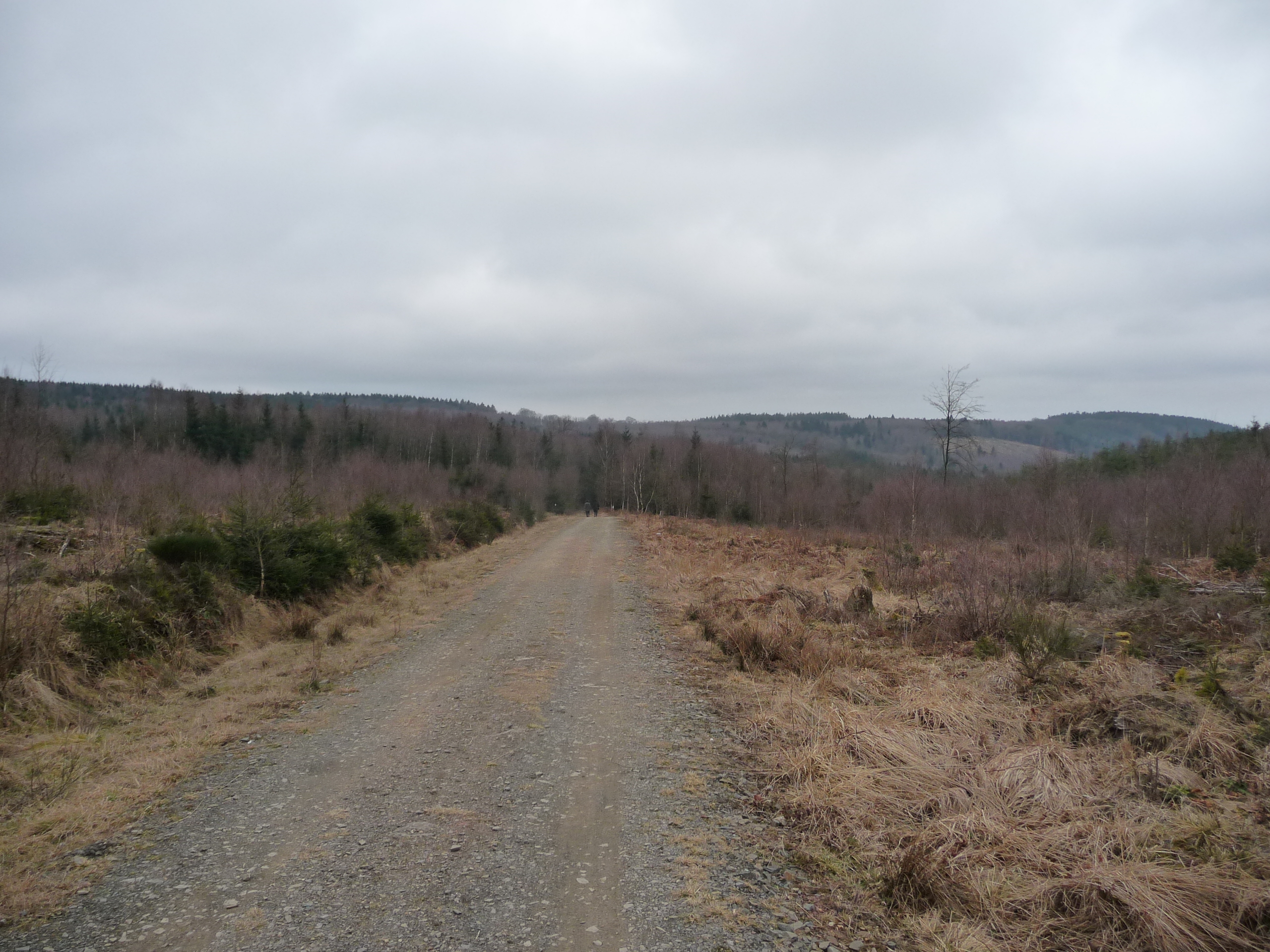 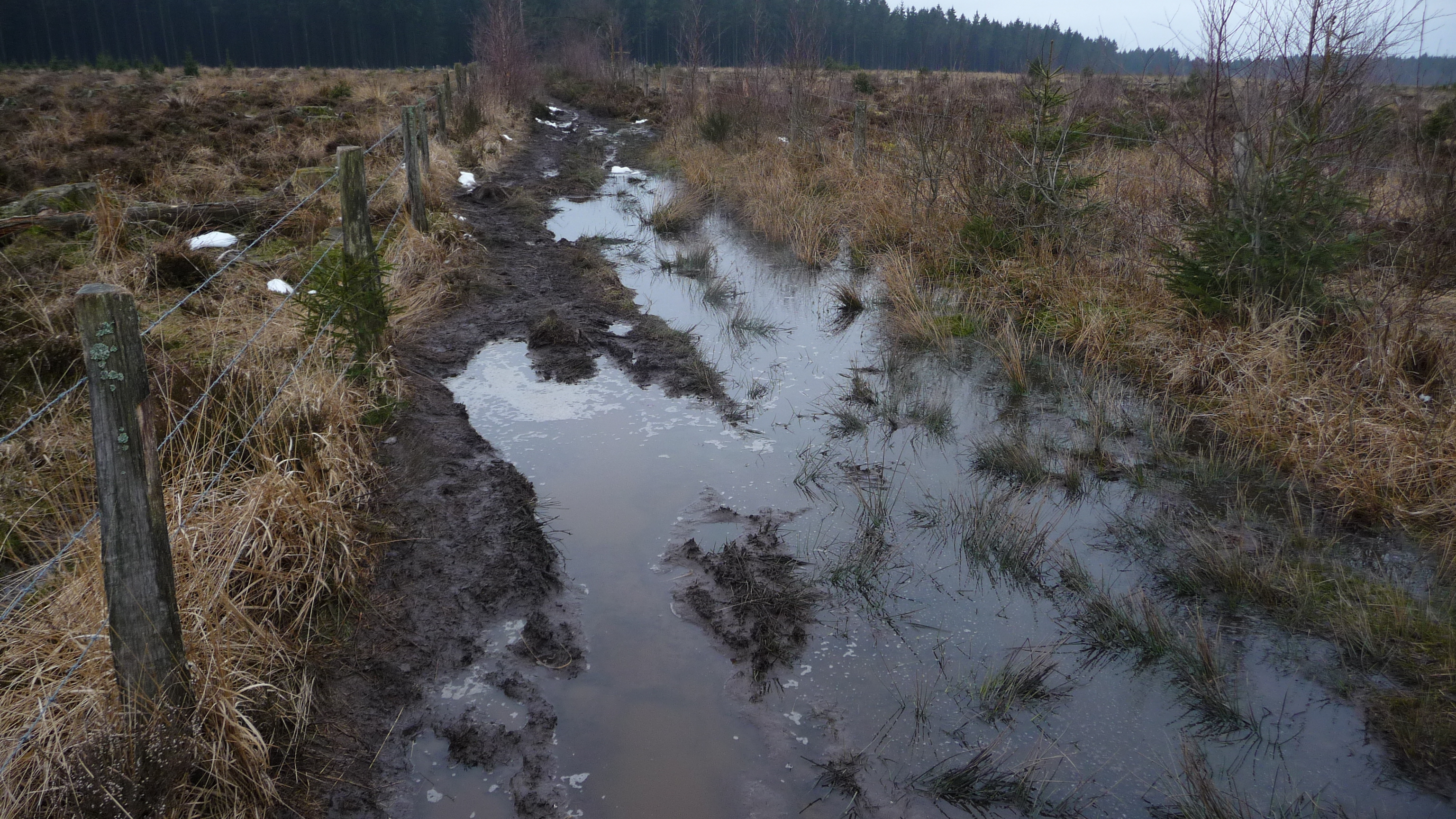 The final few kilometres involved a pleasant descent through the forests to the village of Stoumont. Here I was picked up by Maggy, my overnight host, who I found on AirBnb. I had a lovely evening in her cosy Ardennes cottage, good food and a great sleep.I could even watch England beat France at rugby on the television and win the Grand Slam!Â  Maggy’s is a highly recommended place to stay at, and I hope to stay with her on the return leg of the GR 571, which passes the other side of Stoumont. 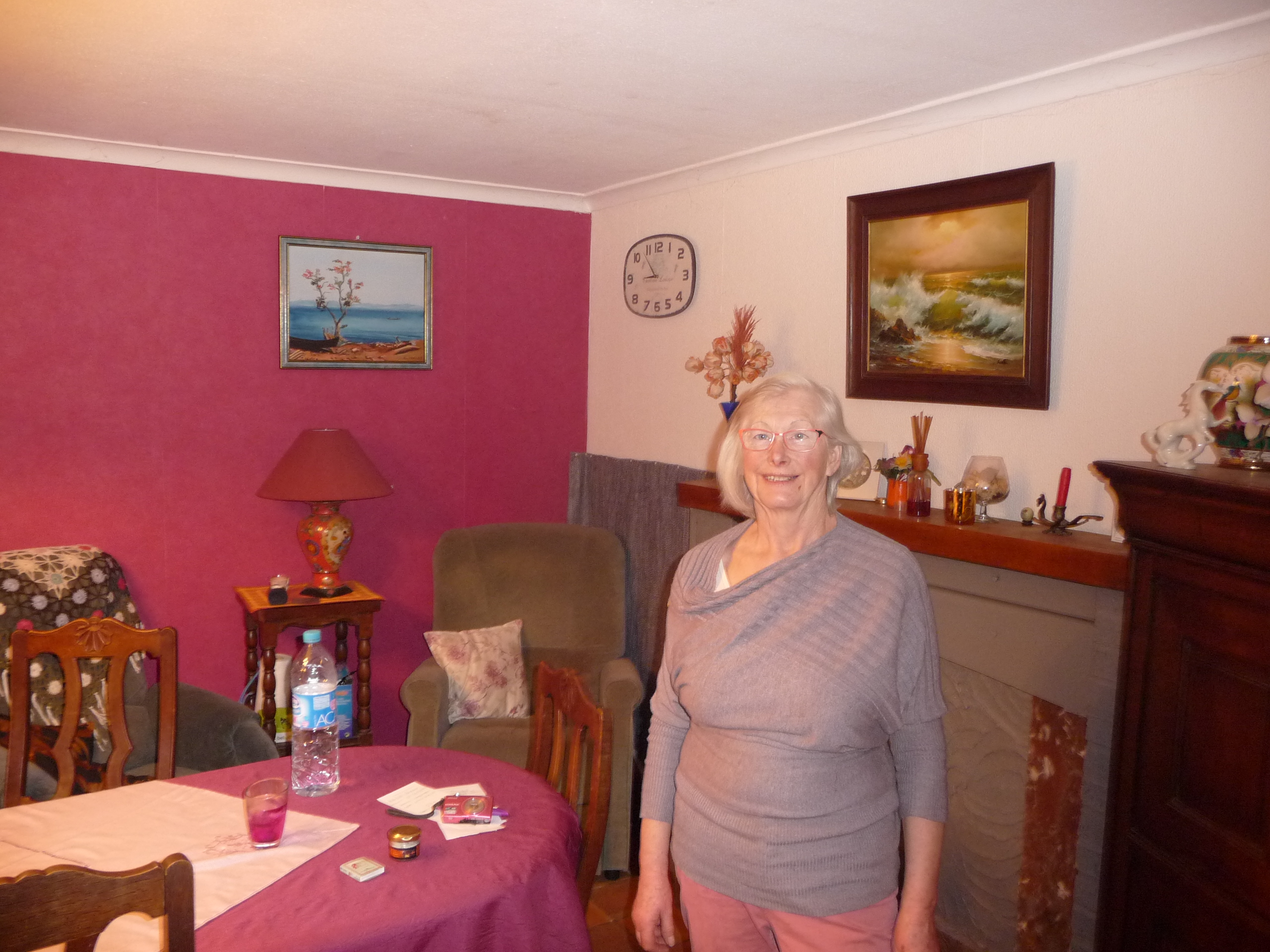 We had also agreed on a price for evening meal, breakfast and a lunch pack for the next day, which I will cover in a forthcoming post.

The route was 21.3 km, and you can find it here on RouteYou.