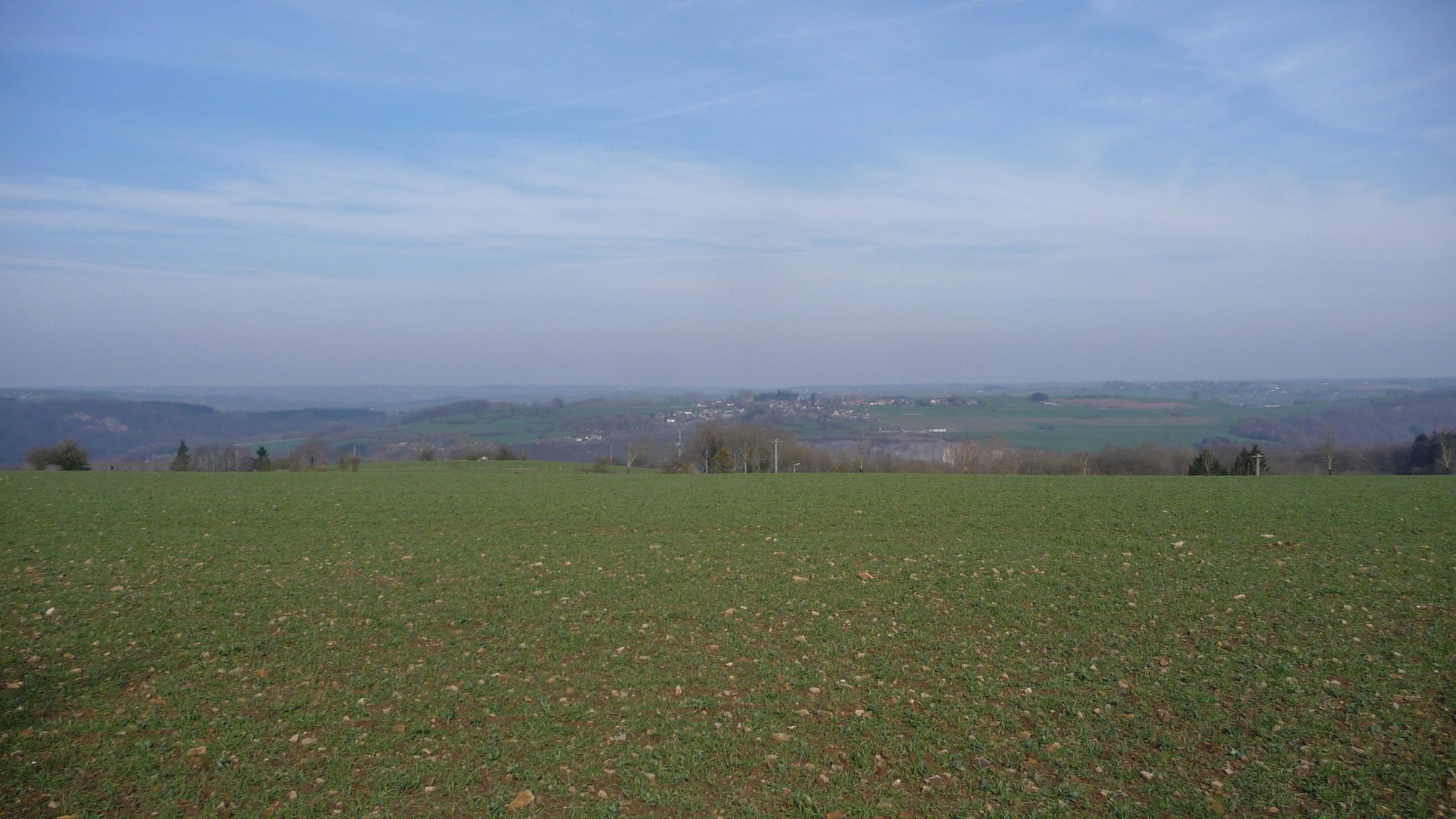 Details and a map of the first stage of the GR 571 long-distance route from its start in Comblain-au-Pont to Aywaille.

To prove that my intentions stated in my last blog post were not a wild dream that I would never get round to achieving, last Saturday evening I packed up my rucksac and early on Sunday morning I set off on the first leg of the GR 571 long-distance path. No weekend trip yet; just a day’s hike to ease into it. Here’s how I got to my starting point.

I got off the train at Rivage station. The first challenge was to work out how to get from the far platform to the station exit. Eventually I realised that I had to simply walk across the track! From the station to the start of the GR 571 in Comblain-au-Pont is about a 1 km walk. Basically head down to the river and turn left until you come to the bridge, which leads you into Comblain-au-Pont itself.

There’s a conveniently located baker’s along the way if you want to stock up with something to eat for lunch.

The start of the GR 571 is not broadcast with a giant signboard or anything, but quietly and simply begins along this little road: Rue de la Gare, Comblain-au-Pont.

It was good to see the first red-and-white markings which I hoped would accompany me for the next 16.9 km (little did I know! But we’ll come to that later).

And so I set off on my little adventure — and ten minutes later I was gasping for breath! The path had climbed almost vertically (slight exaggeration) through the woods, and at the top I had to rest and let my heart rate slow. But the view from the top was magnificent.

Ah yes, this is the life. A great day ahead of me, blue sky, green fields, superb views … what could possibly go wrong?

The first village on the route was a lovely little Ardennes’ village called Oneux.

It was so small that I slipped through it almost without noticing, and saw on my map that the route continued South. But wait a minute: the red-and-white marker indicated I was to go East. Strange.

I checked my compass and the map in the official GR 571 Topo-Guide, and I definitely had to go South. Had the route been changed since the Topo-Guide had been printed, I wondered? I went onto the website of GRSentiers.org (the organisation in charge of the long-distance paths in Wallonia, and from where I had purchased the Topo-Guide), and did a search for GR 571. Nothing there about any route change that I could see. So should I stick with the map, or follow the sign?

I turned East, following the sign, and walked about 600 metres, but there were no other signs indicating that this was the route. So I returned to the crossroads and went South, as indicated on the map.

For the next 6.5 km I followed the route in the printed map, and never saw a single red-and-white sign, which was slightly discomforting. What was also unnerving was that for most of these 6.5 km I shared the path with about two hundred mountain bikers.

But what a walk it was — and what views from the top of the Grand Fawe.

Mind you, it was cold! Actually it was more than cold, it was absolutely freezing up there. The temperature was low already, at 1 degree Centigrade, but the chill factor of the strong easterly wind made it feel like minus 20. It left me wondering if I had wandered beyond the Arctic Circle. I was sure the wind’s last touchdown was in Murmansk. At times I reckoned I could smell the whiff of an Eskimo’s camp fire on the wind, and expected to see a polar bear lumbering around the corner.

Here’s the evidence of my walk in sub-zero temperatures.

But then the path descended into Septroux, where I enjoyed some welcome shelter — and the return of the red-and-white markers! Yes, I was back on the official GR 571! (I’ll explain what happened later).

Next stop was the village of Martinrive where I crossed the AmblÃ¨ve and made my way through the nature reserve of Les Coteaux de Martinrive with its pretty streams and hillside woodland.

Goodness, I wasn’t expecting this!

Rounding a corner I came across an old framed photograph attached to a tree.

Not only was I surprised that the photograph was there, and hadn’t been vandalised, covered in graffiti or stolen (but how would I have known that it had been stolen?) but I was surprised at what was behind it. The Ruines de Neufchastel, otherwise known as the Château d’Amblève  or Amblève Castle.

Dating back to 1049, its peak of power came in 1577 when it was occupied by a garrison of William of Orange who supported the Protestants and organised the rising of the United Provinces against Spain. The following year, the Spaniards attacked the castle and demolished it.

The ruins are a super place to explore. There are plenty of interesting things to see that if I was a historian would be able to describe. But I’m not so I’ll just show you the pictures.

After the path had meandered downhill to the valley, there were great views up to the castle. You can see why it held such a strategic position. 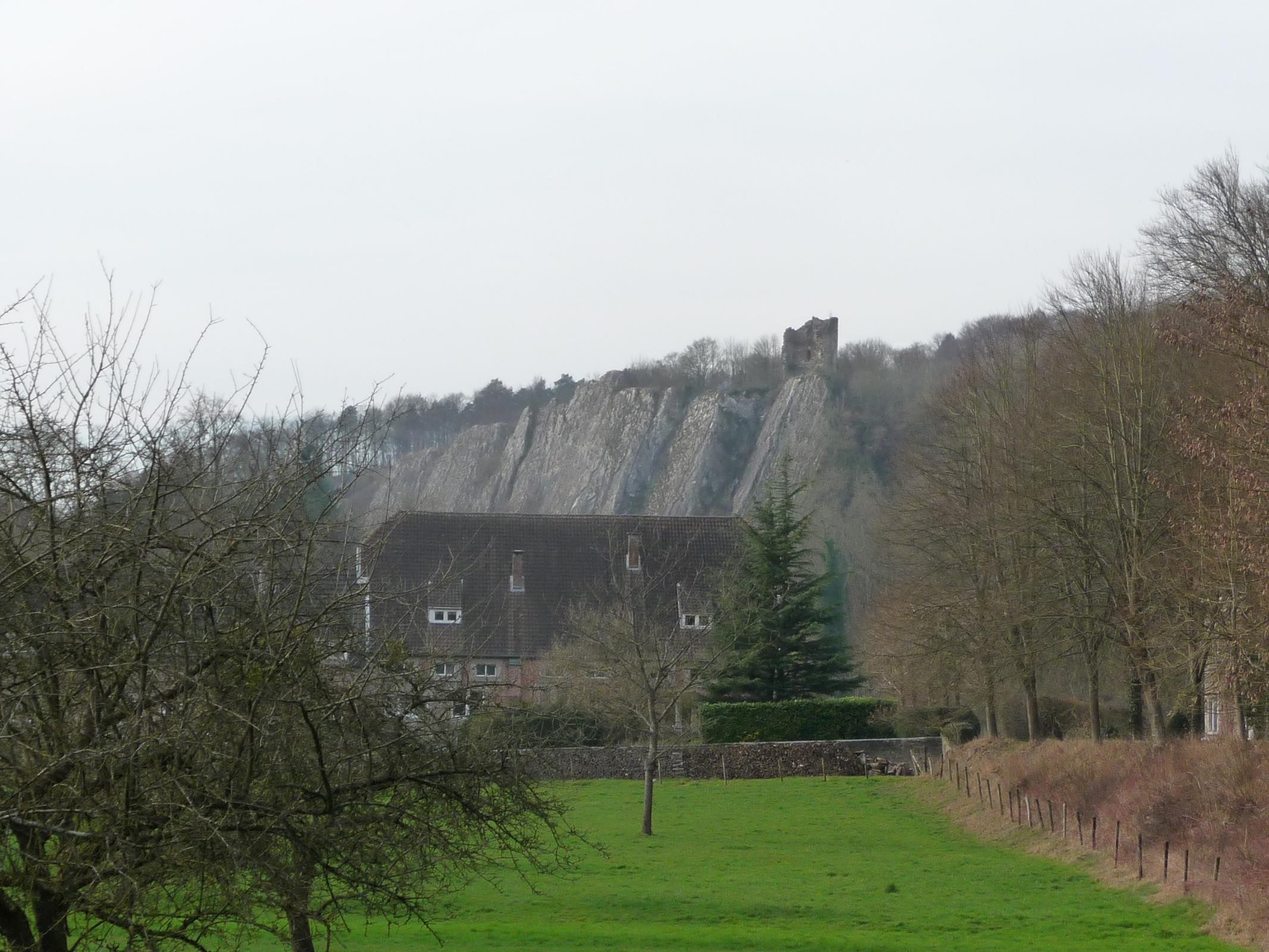 By now the GR 571 had levelled out along the Amblève  river valley. Finally my end destination was in sight: the small but bustling town of Aywaille.

Even on a Sunday afternoon many of the shops were open. There was time to wander around the town a bit and enjoy some fruit in the park, before catching the train from Aywaille railway station and returning through Liège and Leuven to home.

So what happened in Oneux?

Good question. I wrote to GR Sentiers Wallonia about the confusion I experienced in Oneux. They replied and said that the GR 571 had been amended in July 2015 and the revised section of the route was described on the website. After some searching, I did eventually find the changes, although they were hidden away somewhat: 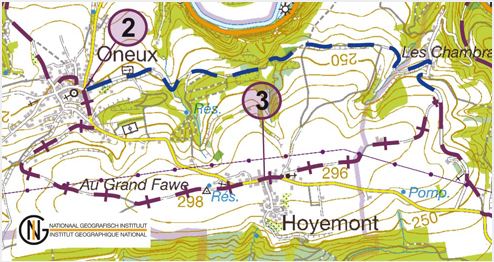 A map of the new route! You can see the new blue route going east from no.2, whereas I stuck to the original one going south and then along the Grand Fawe.

Map of the route

Below is the map of the route. Note that this is the new, amended route, not the (incorrect) one I took above. So if you want to follow the correct route of the GR 571 from Comblain-au-Pont to Aywaille, follow this route:

You can click on the map above to enlarge it. You can download it as a PDF here. And you can get the GPX track from my RouteYou page.

My first stage of the GR 571 was highly enjoyable. The walk went through some gorgeous countryside, and I am looking forward to the next stage. Hopefully the weather will be a bit warmer!