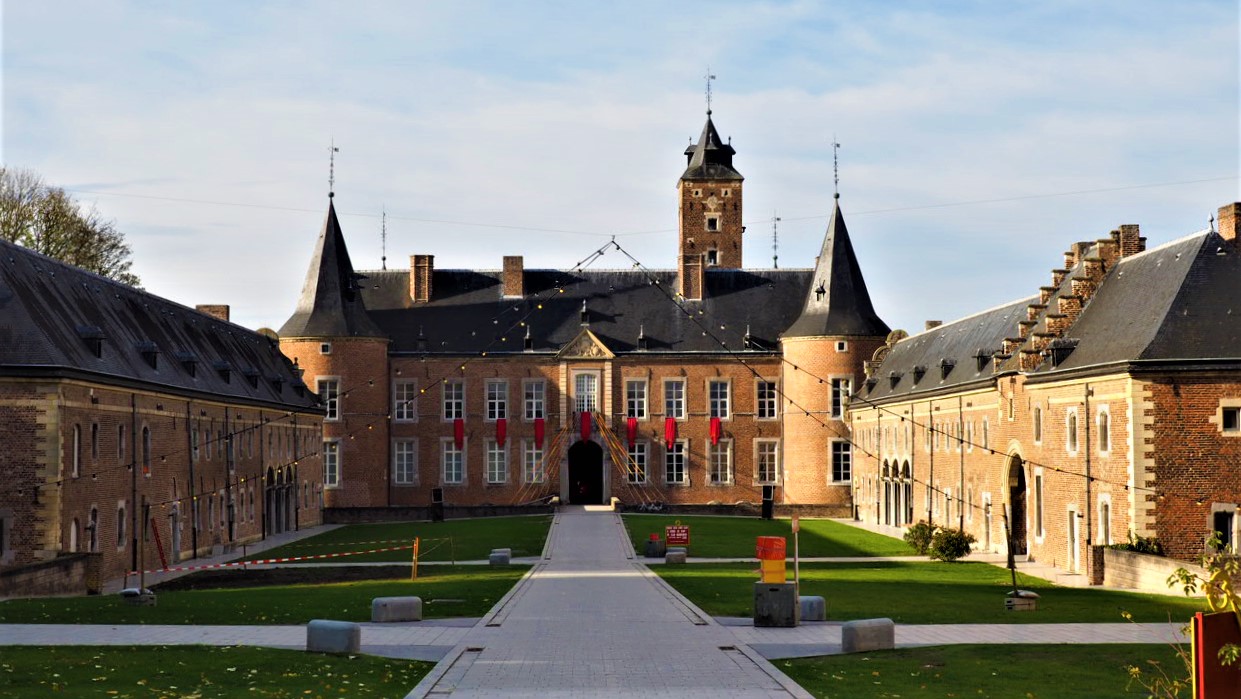 Grand Commandery Alden Biesen is one of the largest and most impressive castle estates in Europe. Here’s a potted history of its 830 years.

I recently visited the imposing Grand Commandery Alden Biesen in the province of Limburg. In this post I’ve made a short overview of its 830-year timeline and describe what’s to see. In another post I’ll describe a circular walk starting and ending at the castle and taking in the neighbouring countryside.

I’ve added a few photos of the place. However, I do not have any photos of inside the buildings because there was a major event taking place. The Sint (Sinterklaas/St. Niklaas/Saint Nicholas) was visiting, and hundreds of children had come to see him. The moated castle had been transformed into the Sint’s Palace and was out of bounds to non-ticket holders, and all sorts of entertainment were also taking place in many of the other buildings too.

I could have photographed some of the events taking place outside, in the courtyards, but didn’t want to. They involved children – and I had no right or permission to take their photos. Also because the children were accompanied by helpers that I didn’t really like seeing: Zwarte Pieten (Black Petes). They are called Black Petes because traditionally they are considered to have been Moors from Spain. To represent their origins, young men and women put on blackface make-up, bright red lipstick, Afro-style curly wigs, and wear large ear-rings.

Not surprisingly, this practice is increasingly seen as controversial. Although many people don’t see it as problematic — citing “harmless cultural heritage” — others are offended by what they regard as “offensive racial stereotyping”. Personally I find it offensive to see white people painting their skin black and playing a stereotypical caricature of black people. This can only give the message to children that blackfacing is OK – and fun. Moreover, children see these black people serving an elderly white master, which has unpleasant undertones of white colonialism and slavery. I was therefore disappointed in Grand Commandery Alden Biesen for allowing blackfacing of Zwarte Pieten on its grounds. I do hope that the authorities reconsider their position next year.

Not surprisingly, it’s the headquarters of a Grand Commander. This was the man who governed a province or bailiwick of the Teutonic Order.

The German Order of the Teutonic Knights was established in 1190 in Acre (Palestine), initially as a kind of health service to treat the ill and injured knights taking part in the Third Crusade. Just a few years later its aims had changed somewhat; to pursue the struggle against those of another faith. Like the Knights Templar, the Teutonic Order was made up of knights and priests, bound by vows of chastity, obedience … and poverty.

Poverty? So how come the Order owned land?

During the Fifth Crusade, against Muslims in Egypt, the Teutonic Order achieved great success. Rich religious landowners became so impressed and pleased with the Knights upholding the Christian faith that they made significant donations of land, parishes and houses to the Order, to further finance its battles. The Teutonic Order thus rapidly became a major European landowner. One of their patrons was the Abbess of Munsterbilzen, who donated a pilgrimage chapel in Bilzen. Here, the knights of the Order decided to build their headquarters to oversee 12 smaller commanderies in the Rhine-Meuse region.

Exit from the Holy Land

In 1244, Jerusalem, the spiritual centre of Christendom, fell to Islam and by the end of the century the Teutonic Order had been totally pushed out of Palestine by the Muslims. As a result, the Order switched its priorities to the Baltic Sea region, fighting against Lithuania in particular. Meanwhile, back home, the Teutonic Knights started to use their income to finance a more “comfortable” lifestyle.

Living in the lap of luxury

In 1543, Grand Commander von Breill ordered an opulent summer residence to be built on the estate of Alden Biesen to showcase his high status. Its design followed the traditional moated castles of that time. Alden Biesen would remain under permanent construction and expansion until the 18th century.

Between 1769 and 1775, Grand Commander Belderbusch opened up the moated castle to the landscape, creating the layout we see today. He erected the Riding School and the Tithe Barn.

Ten years later, Grand Commander von Reischach focused on landscaping the gardens, adding exotic trees and shrubs, water features, and a few follies like the Roman Minerva temple, a Chinese temple, a cave and a hermitage.

Just when the Grand Commandery was in its prime, disaster befell Alden Biesem. French revolutionaries invaded the region, drove the knights away and confiscated Alden Biesen and all of the other holdings of the Order. In 1797 the estate was auctioned off in Maastricht to a resident of Hasselt called Guillaume Claes. Alden Biesen consequently lost its status, and this marked the start of a long, slow decline. It was further exacerbated in 1809 when Napoleon Bonaparte dissolved the Teutonic Order in all the states of the German Confederation of the Rhine.

Amazingly, in 1929 the Teutonic Order was re-created under a new regime. Gone were the military ideals. It was re-formed as a religious institution of priests and nuns under the supervision of a Priest Grand Master based in Vienna.

On 8 March 1971, a fire originating in the chimney swept through the moated castle. It burnt to the ground. However, just three months later, the Belgian government upheld its earlier decision to purchase and renovate Alden Biesen.

Alden Biesen is now one of the largest heritage sites in Flanders and receives thousands of visitors each year. It hosts numerous historic, contemporary, cultural and touristic activities as well as business conferences and meetings.

The grounds are open to the public, free of charge, every day except the main feast days. There is a charge (5 EUR) to visit the moated castle, but this is possible only during exhibitions between 10 am and 5 am from Tuesday through Sunday.

There really is a lot going on in the Grand Commandery Alden Biesen. Activities include the Bilzen Mysteries, described as a fascinating, interactive quest for young and old, full of puzzles, clues and assignments. Music events include the Summer Opera, the Scottish Weekend, and Biesenrock. It’s the starting point for a number of cycle routes and walks (one of which I describe here). And it hosts various International Storytelling events.

I hope you enjoy your visit. Let me know how you get on, or what your experiences were if you’ve already visited.

A comment by Audrey (below) reminded me of a fascinating article on the BBC History Extra website that links the atrocities carried out during the Crusades by Christian groups like the Teutonic Order, with the current tension between the west and Muslim countries. It’s well worth a read, and I’d be interested in your views.

To receive new posts like this in your inbox, subscribe to Discovering Belgium by adding your email below: