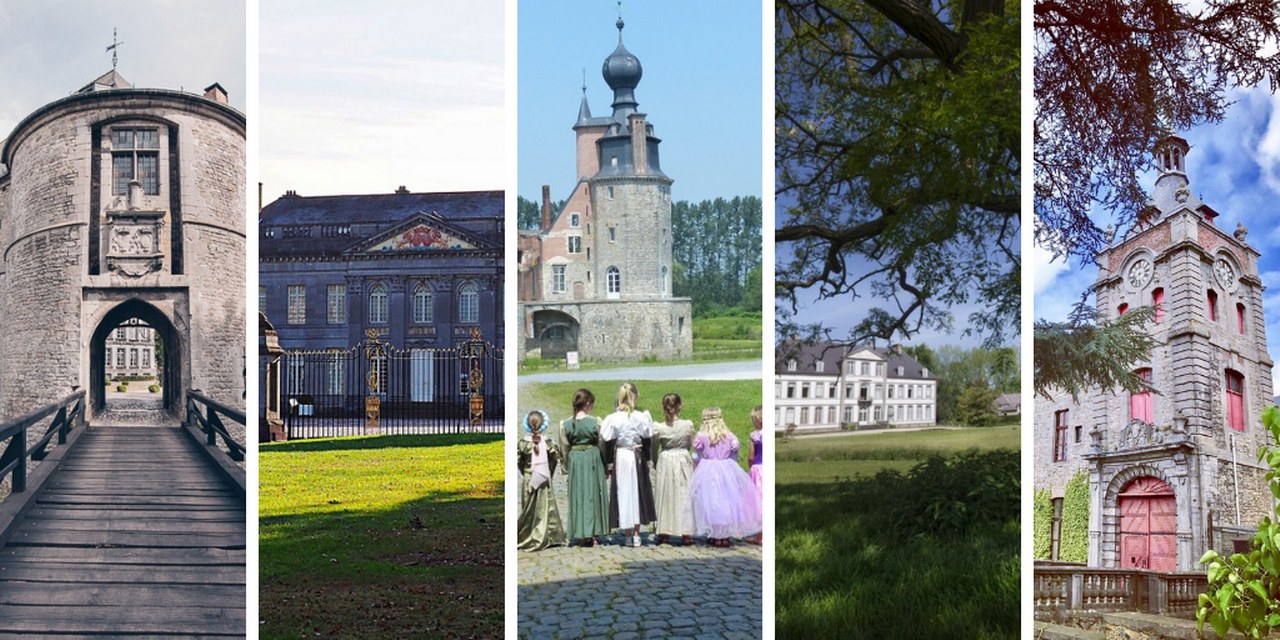 An introduction to five castles in Hainaut Province, to briefly visit in one day, or over multiple days for more in-depth visits.

Let me start by saying that you don’t have to visit all these five castles in Hainaut Province on one day! For some of you, just one castle will be perfect. You might want to spend a couple of hours in a castle and another hour in the grounds. And that might be enough for your day out. Others might want to combine a castle visit with a nearby walk or a visit to a local town.

On the other hand, some of you may just want to have a peek at a castle, quickly walk around the grounds, snap a few photos, and go onto the next one.

Whatever your plan, it’s worth knowing that not all the castles on this tour are open for visitors. Others have restricted opening hours. So the chance of being able to visit all five in-depth on a particular day is fairly small anyway. In other words, you’ll have to do some mixing and matching to work out the best agenda for you.

This post is the third and last in a series that Hainaut Tourism commissioned me to write. It follows Three Walks in Hainaut Province and Cycling Around Hainaut Province.

The agenda for the day

The first of the five castles in Hainaut Province is the Château de Seneffe. From wherever you live or are staying in Belgium, make your way to Rue Lucien Plasman 24, 7180 Seneffe which is the address for the car park to the château.

Second up is the Château de Feluy. You can park your car at Rue Victor Rousseau 7, 7181 Feluy.

Next stop is the Château d’Écaussines. You’ll probably be in need of some midday sustenance by now. So make your way to the Grand Place, 7190 Écaussinnes. Here can stop for lunch at La Taverne de l’Hôtel de Ville, either before or after looking around the Château, which is a short walk from La Taverne.

Castle number four is the Château d’Havré. There is free parking available on the Rue du Château (30), 7021 Mons.

The fifth and final stop is Château d’Attre.  Park in the car park opposite the château on Avenue du Chateau (8), 7941 Brugelette.

To give you an idea of the location of the five castles (and a driving route if you want to visit all five), below is a route map which you can also download as a PDF. To put the route into your GPS you can get the track from my RouteYou page.

It’s impossible to describe some of the castles fully in a single blog post. Below is a brief introduction to each. I’ll be covering some of them in more detail in later posts.

The Château de Seneffe was built in the 18th century. It houses a stunning collection of silver. This is a permanent collection of 500 pieces that are presented in a very interesting way. There are no standard presentations with lengthy texts here. Instead, the pieces of silver match the themed rooms and are displayed with accompanying soundtracks, videos, movie excerpts, and even fragrances. So, for example, in one salon, you’ll not only see an amazing collection of silver chocolate pots (chocolatières), you’ll be able to smell and almost taste the newly poured chocolate. Or in the Grand Salon you’ll be able to discover how it was a meeting place for literary, artistic and scientific thinkers, with various early lighting implements displayed. Be sure to watch the stunning video in this room. Until 8 November 2020 the temporary exhibition “The Golden Triangle” introduces you to the studio and shop of a master silversmith.

You can also visit the lovely French gardens and visit the theatre, aviary, orangery, ponds, and ice-house. I enjoyed my guided tour and then my walk around the grounds, and will write a detailed post on the Chateau de Seneffe later. Check out the opening times and admission prices before your visit.

Part of this castle dates back to 1380, while the main residence was constructed in the 16th century. It’s not open to the public except on Monument Day, but you can still get a good view from Rue Victor Rousseau. The best way to enjoy it is via a wedding reception, seminar or other event. The castle regularly organises and hosts events for up to 150 people. The owner gave me a tour of the 14th century medieval keep, the Gothic gallery, and the Egmont rooms. I then wandered around through the terrace and into the park, where I was pleased to see a kingfisher fishing in the moat. If you fancy holding an event in a unique location, contact the owner.

Perched on a steep rock, this fortified and austere castle overlooks the village of Ecaussines. The ground floor includes a chapel, kitchen and weapons room from the Middle Ages, while the higher floors date from the 18th century. The walled kitchen garden flourishes in its own micro-climate. The castle is open from April to October every day, but only for groups. For individual visitors the castle is open on Sunday afternoons, 2 pm to 6 pm, April to September.

The first stones of the Château d’Havré were laid in the 12th century and formed a feudal fortress that served as an important defensive position for the earldom of Hainaut. Some of those stones can still be seen today. Not surprisingly, since then it’s gone through a number of demolitions and reconstructions. Its heyday was during the Renaissance, when the castle was an imposing residence where many celebrities stayed. On its guest list included Marie of Hungary in 1537, the painters Rubens and Van Dyck in the 1620s, Marie De Medicis and the Infanta Isabella in 1631, and the Duke of Marlborough in 1709. By 1839 however, it had been abandoned, and was gradually left to decay.

In the early 20th century, a passing American tried to purchase it with the intention of rebuilding it in his homeland. The Province of Hainaut vetoed his idea. In 1979, a group of friends, upset by the decay of the castle and its apparently inevitable disappearance from the national heritage, established a non-profit-making organisation. The lengthy and difficult process of restoration commenced. The organisation employs a team of experienced craftsmen specialising in the restoration of monuments. Various events are held throughout the year to raise funds for its continuing restoration.

The castle and the museums are open from February to November, Monday to Friday, 10 am to 4 pm. Halls can be rented for conferences, dinners, exhibitions and other activities by contacting the castle office. I enjoyed a very detailed and entertaining tour of the castle, and will be writing a detailed post later.

Built on the foundations of a medieval fortress in 1752, the Château d’Attre was home to Archduchess Marie-Christine of Austria and Duke Albert of Saxony Teschen. Designed in Louis XIV style, it’s in excellent condition and has fascinating collections of furniture, art and other objects. I was given a great tour of its salons, but didn’t have time to visit the grounds. I recommend making time to visit them. The castle’s 17-hectare park contains English and woodland gardens, a belvedere tower, an 18th century dovecote, a hermitage, a bathing pavilion, and an artificial, 24-metre high rock built between 1780 and 1788. On top of this rock is a Swiss mountain chalet! The castle is open to the public from April to October on Sundays and public holidays from 2 pm to 6 pm. During July and August it’s also open on Saturdays from 1 pm to 6 pm. You can expect a detailed post on this castle later.

So that’s a short introduction to these five castles in Hainaut Province. Pick the one(s) you want to visit and customize your trip accordingly. Let me know how you get on. Any questions, just drop me a line. Thanks to Camille from Hainaut Tourism for arranging all three days in the province and for facilitating the visits to the castles.

If you’re not yet subscribed, add your email below to keep up-to-date with new posts on Discovering Belgium, including the detailed posts on the castles of Seneffe, Havré and Attre. I’ll write these in Spring 2021 when they announce their new collections and activities.

8 thoughts on “Five castles to visit in Hainaut Province”