A historical walk around Nieuwpoort 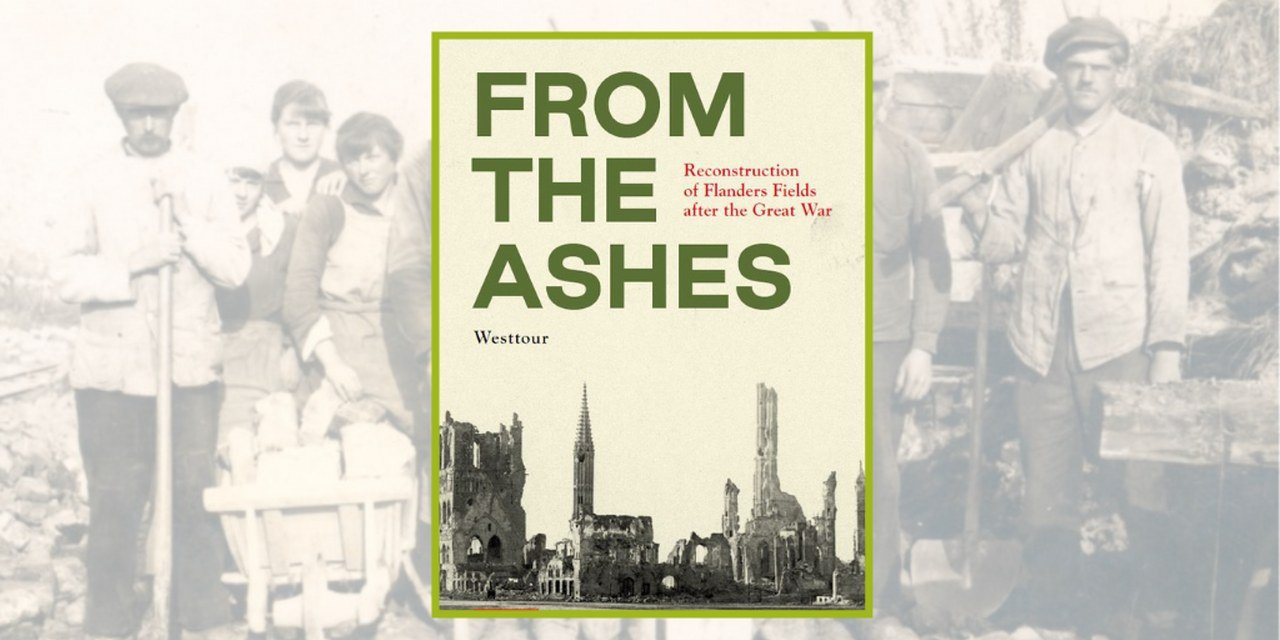 During the First World War, dozens of towns and villages along the old frontline were wiped clean off the map. As a result, after the Armistice in November 1918, the entire Westhoek region of Flanders was a wasteland of desolation. Recovery seemed impossible. Yet slowly but surely, the Westhoek clawed its way back to its feet. Within a decade, the reconstruction was largely completed.

The book “From The Ashes” tells the remarkable story not only of the rebuilding of bricks and mortar, but also of the recovery of the region’s social and cultural life. It also describes a number of short walking routes around the towns of the Westhoek.

It is an excellent book, full of interesting and easy-to-digest information, and also good value at only 5 EUR. It’s available in Dutch (“Terug Naar De Westhoek”) and English. Copies in either language are available from the tourist offices in the Westhoek, while the English version is also on Amazon.co.uk.

However, to avoid going into a tourist office in these COVID days, you can send an email to [email protected] and request the English version. If you are in Belgium they will send it to you by post at only an extra 2 EUR P&P. Originally this was only possible for the Dutch version, but I specifically asked them if they could extend this facility to the English version. If you have any problems, just mention Discovering Belgium in your email, or drop me a line.

To give you a sneak preview of the book and an example of a town walk, I’ve been given permission to reprint a few photos from the book to describe one walk in particular. As with my post on the Reconstruction of Ypres, I am delighted to have the services of blogger and photographer Stefaan (read his blog Ostendnomadography and check him out on Instagram. He kindly visited Nieuwpoort to take some photos of modern-day Nieuwpoort. Thanks Stefaan!

a Historical walk around Nieuwpoort

As early as 1916, Nieuwpoort was described as “an uninhabitable ruin.” By the time the Germans withdrew, the town had been virtually razed to the ground.

After the war, temporary wooden houses with tin roofs were constructed in a “barrack district”:

The map below is of a 3 km route around some of the main historical points of interest in Nieuwpoort. You can click on the image for a larger version, or download the map to print and take it around with you.

You’ll see that the route takes you to seven points of interest.

Starting point is the Westfront visitors centre which explains the role of the Nieuwpoort locks in the flooding of the Ijzer plain, which brought the German Army to a halt.

The impressive Albert I Memorial was constructed in 1938.

The Devil’s Tower (Duvetorre) is a remnant of the former St. Lawrence Church, which was built here in 1281. Later, the tower was incorporated into the town’s fortified walls. After the war it was destroyed – almost completely – but you can still see the ruins today. Its name is supposedly linked to Jeanne Panne (1593-1650), the wife of a Nieuwpoort baker, who was executed at the stake for witchcraft.

The last survivor of Nieuwpoort’s city fortifications from the beginning of the 19th century is a gunpowder and ammunition storage facility that was constructed between 1818 and 1822.

On the corner of Hoogstraat and Langestraat the grand Hôtel de l’Espérance used to exist. Between 1920 and 1925 it was rebuilt and renamed ‘t Kasteeltje or the Cultuurhuis. It’s been constructed in the the traditional Flemish Renaissance style much loved by the 17th century bourgeoisie.

Church of Our Lady

After its total destruction, the Onze-Lieve-Vrouwekerk was completely reconstructed in Gothic style in 1922. It was badly damaged during the Second World War and repaired afterwards.

I hope you find “From The Ashes” useful. It’s 128 pages, A5 size, hardback, with plenty of colour and B/W photos. It covers Ypres, Diksmuide, Nieuwpoort, Heuvelland, Popinge, Langemark-Poelkapelle, Houthulst, Koekelare, Veurne, Mesen, and Lo-Reninge. So plenty there to keep you busy, either at home reading about these places, or on foot.

I should also point out that it includes dated events and exhibitions that due to COVID-19 have been postponed. Let’s hope they can take place later.

To get all new posts from Discovering Belgium into your email inbox, add your email below:

1 thought on “A historical walk around Nieuwpoort”