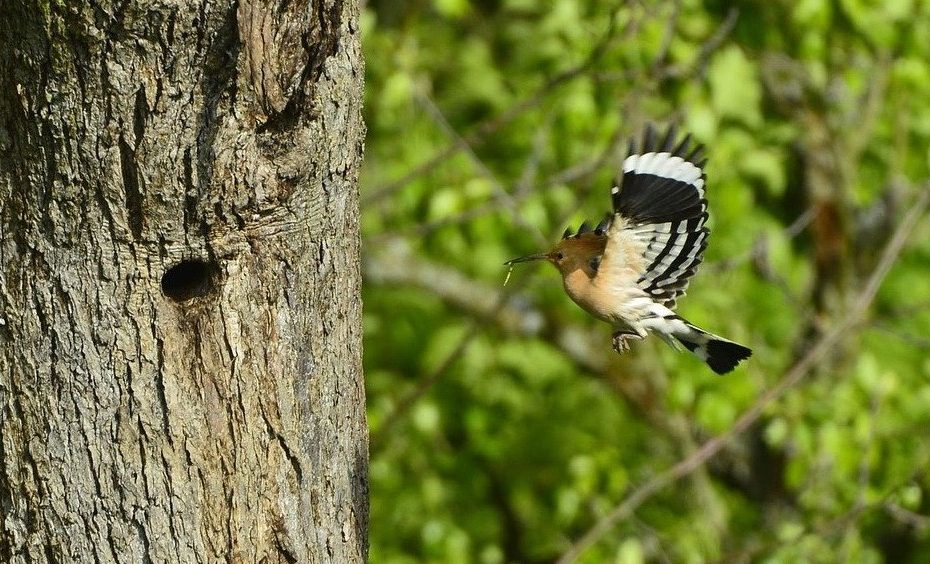 After an absence of 50 years, a pair of hoopoes has successfully nested in Limburg, Belgium.

The hoopoe is a beautiful and striking bird the size of a small pigeon. In fact there’s something exotic about it, with its pinkish-brown body, black and white wings, and long down-curved bill. But its the bird’s rather splendid crest of feathers which it raises when excited that makes the hoopoe stand out. It looks like it’s wearing a head-dress.

The hoopoe (Upupa epops) is a rare summer visitor to Belgium, although it is being spotted increasingly more often. I’ve never seen one in Belgium, but enjoyed watching them a few years ago when on holiday in the south of France. If you’re wondering how the hoopoe got its name, it’s onomatopoeic, as you will understand if you listen to this:

This spring there was great excitement among local birdwatchers in Neerpelt in the province of Limburg. Two hoopoes were not only spotted, but were seen making a nest in an abandoned woodpecker’s hole in an oak tree on the Hageven nature reserve. To avoid an influx of birdwatchers and photographers, the news was kept quiet. Especially as the nest was close to a fairly busy walking route.

Local representatives of the Natuurpunt organization kept a close eye on the pair though. In June they noticed the two adults collecting crickets, grasshoppers and dung beetles from the local fields and carrying them back to the nest hole. Could they be nesting? The birds continued to bring food – and then cheeping was heard! On 11th July a young hoopoe left the nest and actually spent some time on the hiking trail. Over the next two days two more chicks fledged.

This is obviously great news, and there are hopes that these hoopoes will return next spring. A couple of hoopoes nested in Antwerp province in 2017, but this is the first time they’ve nested in Limburg for 50 years. In Wallonia the hoopoe nested regularly until 1979. A nesting pair was recorded in Chimay in 2009. It would be thrilling if these superb birds could be seen more often in Belgium and start breeding here in numbers. At the same time of course, the northwards extension of their breeding range is yet further evidence of the effects of climate change.

Hoopoes are not the only rare bird breeding in Limburg. Also this year, birdwatchers were amazed to discover a pair of breeding cranes breeding successfully in the Valley of the Zwarte Beek. These are believed to be the first ever Common Cranes to breed in Belgium.

With so many bird species in decline, it’s so encouraging to hear of new species setting up home in our country!

To get more Belgium news straight into your inbox, subscribe to Discovering Belgium by adding your email below: