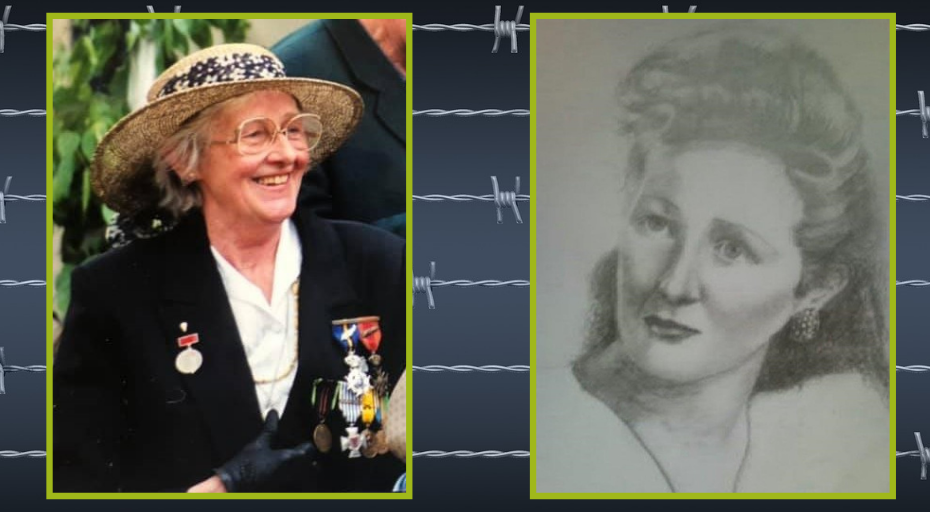 Hortense Clews (born Hortense Daman) was a courageous member of the Belgian resistance movement in the Second World War while still in her teens, and a survivor of the Ravensbrück concentration camp.

The story of Hortense Daman Clews is one of the most powerful accounts of courage and fortitude of a teenager amidst horrendous circumstances that I have come across.

Hortense Daman was born on 12 August 1926. Her father Jacques was a shoemaker; her mother Stephanie ran a grocery shop. The family lived in Pleinstraat, Leuven, Belgium. In May 1940, when she was 13, Hortense witnessed the first air attacks from the Luftwaffe’s Stukas on Leuven, which demolished some of the houses in Pleinstraat. Facing the threat of German occupation, the family joined thousands of other refugees in a mass evacuation of Leuven. After eight hot, dusty and tiring days of walking, they arrived in Mons, but carried on until they arrived in Lille. But by then the Germans had already arrived – and sent them back to Leuven. Arriving back in Pleinstraat, they discovered their house was an uninhabitable shell. Stephanie and her children lived in a small apartment in Brussels while Jacques repaired the house. The family finally moved back to Pleinstraat in October 1940.

Working for the Resistance

Around this time, Hortense’s elder brother François – a Sergeant in the Belgian Artillery – became involved in the Belgian resistance movement. Hortense showed interest in getting involved. Although initially dissuaded by Francois, she insisted and was soon running small errands on her bicycle. She was only 13 at the time.

As a courier, she worked under the cover of her mother’s grocery store. She could therefore deliver messages and food parcels along with groceries. The local German soldiers became used to seeing this pretty young Belgian girl with the blonde curls cycling around Leuven and the surrounding countryside, and thought she was sweet and innocent. They called her “Kleine Hortensia” and smiled at her efforts to speak German with them.

But Hortense, through her bravery and guile, was becoming a key member of the resistance. As the years rolled by, her involvement increased. She was soon playing a vital role in helping Allied airmen escape through France and Spain and back to England. Some of them were even harbored by the Daman family in their small home in Leuven. With the Gestapo all around, and informers everywhere, the risks to her and her family were enormous.

By the summer of 1942 Hortense was in direct liaison with the resistance headquarters in Brussels. She was conveying radio parts, forged passports and other key documents – often in full view of the Germans. By 1943 Hortense was a full member of the Partisans, delivering messages and reports to help them carry out attacks on the occupying force. On one occasion she delivered a machine gun strapped to the back of her bike. On another, 40 kg of explosives. Once, when smuggling grenades – hidden at the bottom of a basket of eggs – she was stopped by a German soldier. But she calmly picked up two eggs and handed them to the soldier and carried on her way.

Betrayed to the Gestapo

With the Gestapo stepping up their efforts to break the Resistance, it was inevitable that Hortense’s work as a courier would be discovered. In the evening of Valentine’s Day, 1944, when Hortense was 17, the Gestapo raided the family home. The back and front doors were kicked in and soldiers stormed through the house, shouting and striking out with their rifles. Hortense saw her mother punched and shoved against the wall; her father violently beaten; and the family dog kicked to death. Hortense herself suffered three broken ribs. François was not in the house at the time.

The Germans ransacked the house, and took the family to Leuven Prison. Here, Hortense was tortured and interrogated as a terrorist. The Gestapo wanted her to confess the names of other resistance fighters, and the secret hideouts of François. Hortense kept her mouth shut.

In the prison she met up with her mother again. Hortense was appalled to see that all of her mother’s teeth had been knocked out. Day after day for a full month, Hortense was subject to sudden beatings, leaving her bruised and exhausted. But she still refused to name names.

On 15 May 1944, Hortense, her mother and a group of other Belgian women were escorted from the prison and put in trucks. They were driven to St Gilles Prison in Brussels. Here, Hortense was put in solitary confinement in a cell with the sign “Under sentence of death” on the door. In June she was herded into a cattle truck at one of the railway stations in Brussels. The train set off for Germany.

For four days and nights the train rumbled slowly across Europe. The women were manacled to wooden benches and had to sit in their own excrement. There was no food, and little water. On one night the whole train was abandoned on a sidings outside Berlin as Allied planes rained down bombs on the city. It was a terrifying experience.

Eventually the transport reached its destination: the Ravensbrück concentration camp, 90 km north of Berlin in northern Germany. This had been built by the Nazi regime in 1939 for the sole purpose of housing women. Though it was initially small, designed to hold only 3,000 prisoners, it was holding ten times that number in horrifying conditions.

Arriving in Ravensbrück, Hortense came face to face with a female Nazi German officer with a whip and a fierce Alsatian. She was an Aufseherin (female overseer) at the camp, and already had a reputation for continuous and unspeakable cruelty. Her name was Dorothea Binz, and later would be executed for war crimes.

The women were stripped, showered, and internally examined. Suddenly the examining doctor stepped back and a brilliant light shone on Hortense from the ceiling. She felt a scorching, burning agony down her left side. Hortense didn’t know it at the time, but she had just been sterilized with a high dose of X-rays.

Later, Hortense was taken to another examination room where Dr Rolf Rosenthal gave her an injection in her left thigh. Again, she had no idea what this was. Later it turned out to be gangrene. Dr Rosenthal was using prisoners as human guinea pigs. He would also be executed for war crimes after the war.

Understandably, Ravensbrück was hell on earth for Hortense. Suffering from radiation sickness and gangrene, on top of malnutrition and an attack of typhus, she became extremely sick. She spent a lot of time in the camp hospital, barely conscious. But thanks mainly to the selflessness of other prisoners, a Belgian nurse called Claire Van den Boom, and British secret agent Violette Szabo, against all the odds, Hortense survived.

In August 1944, just after she turned 18, Hortense was told that her mother had arrived in Ravensbrück. Eventually they saw each other from a distance. But later they were able to meet and briefly hug each other. These times were a source of great encouragement to both of them.

Through the winter of 1944-45, the women in Ravensbrück tried desperately to survive the atrocious conditions, spurred on by news that the Germans were retreating from both their Western and Eastern fronts. During this time Hortense was marched to the local Siemens factory every day to work long hours producing electronic components for German aircraft. Even here, her resistance continued. She would deliberately sabotage some components so that they would not work. Just before Christmas, she heard that Leuven had been liberated.

With the end of the war in sight, the Germans accelerated the elimination of prisoners. A new gas chamber was hastily constructed. Altogether, it’s believed that up to 30,000 women died in Ravensbrück.

On 29 April 1945, the remaining SS guards at Ravensbrück fled, and on 30 April the vanguard of the Soviet Army arrived. The following day its regular units appeared and liberated the last prisoners. They found over 2,000 sick women and children in the camp. Two of them were Hortense and Stephanie Daman.

Officials from the Swedish and Danish Red Cross appeared, and agreed to transport the remaining prisoners out of Germany and into Sweden and Denmark. It was not an easy journey. The war was still ongoing, and their convoy was repeatedly attacked by German and Allied planes. But eventually Hortense and Stephanie arrived in Malmö in southern Sweden. Here they were given good medical treatment and could recover in peace.

On 29 June 1945 the two women boarded a Royal Canadian Air Force Lancaster bomber at Malmö airport, bound for Belgium. They were picked up by a relative and driven back to Pleinstraat in Leuven. Here they were greeted by Jacques Daman – Hortense’s father. He had been transported to Buchenwald concentration camp where his son François had found him after its liberation.

After all their unbelievable hardship, the Daman family was reunited once more. Hortense was still only 18.

Married to a British soldier

In Leuven, Hortense met the man who would become her husband. Sydney Clews was a Staff Sergeant in the British Army. He was stationed in Leuven at the end of the war and had got to know the Daman family.

Hortense and Sydney married on 23 February 1946. They moved to the UK and settled in Staffordshire. Despite being told she could never have children after her enforced sterilization in Ravensbrück, in April 1961 Hortense gave birth to a daughter, Julia. In 1968 their son Christopher was born.

Honored for her bravery

Hortense Daman Clews was given numerous honors for her bravery and sacrifice during World War Two. She was awarded the prestigious Belgian Croix de Guerre and the Medal of Resistance, and was appointed a Knight of the Order of Leopold II. She also received certificates of thanks from the Royal Air Force, the Canadian Air Force, and the Allied Air Crew. She also received the freedom of the cities of London and Stoke-on-Trent.

Hortense Daman Clews died on 18 December 2006, at the age of eighty.

A book has been written about Hortense Daman Clews. It’s called Child of War by Mark Bles. It is an excellent book, and well worth reading for a more detailed account of this exceptional Belgian woman. The paperback is out of print, but it’s available and updated as a Kindle.

I would like to thank Julia Clews for permission to use these photographs of her mother.

If you want to read more inspirational stories of Remarkable Belgians, try these:

If you would like to get new articles on Remarkable Belgians straight into your inbox, add your email below: