How to deal with wasps 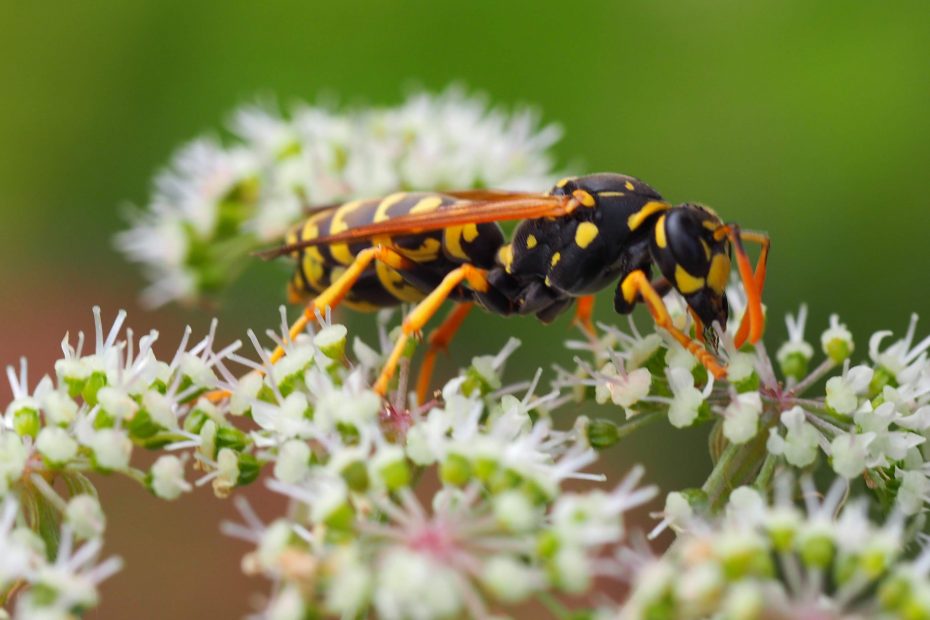 There are plenty of wasps across Europe this summer. Here are ten tips to deal with them.

It’s a familiar scenario. You’ve set out a picnic in your garden or local park, you take your first bite of a sandwich, and suddenly from out of nowhere half a dozen angry-looking, buzzing wasps have gate-crashed the party. And look set to stay and enjoy the feast! What do you do?

This scenario is likely to be a common one this summer in Belgium – and elsewhere in Europe, according to news reports like these:

The increase in the number of wasps is due to a number of factors that are all coming together at the same time. The mild winter meant more queen wasps survived to build new nests. There were few spring frosts or storms so the nests survived. The warm summer means that the nests are now thriving. The end result: more wasps than usual.

So what should you do to prevent wasps ruining your garden party? Here are some tips.

1. Keep your food covered as much as possible

It’s not always possible of course, but it will help. Wasps have a strong sense of smell. So the longer your food is out in the open, the bigger the chance of attracting wasps. So pack your food in sealable boxes and uncover it only when you need it, instead of opening all the boxes at once and leaving them open. If you have food in bowls, drape cloths over them. If the wasps can’t access the food, they will fly away. At least, that’s the theory! Oh, and avoid leaving drinks open, particularly sweet fizzy ones. So screwcap bottles are preferable to cans.

As well as being guided to food by their sense of smell, wasps are drawn towards bright colours. Apparently, white, tan, cream, grey and black are considered to be colours that don’t attract wasps, as opposed to yellow, orange and red. This again isn’t always possible. Who wants to attend a picnic in the park dressed in black, looking like you’ve just come from a funeral? But you might to think twice about that bright red floral hat.

3. Stay off the perfume

Avoid perfumed soap and shampoo and try not to wear perfume, cologne or aftershave just before you sit outside. If you smell like a flower, wasps might think you are one.

Citronella candles have long been used as a simple but effective way to keep wasps at bay. Not everyone agrees, but they are worth trying. You can get them as tealights, so you could light a few and place them around the picnic table.

This is relevant to picnics in your garden, and requires a bit of long-term planning, starting in the early spring. If you have a patio or area of your garden where you picnic, you could surround it with fragrant plants that repel wasps. Examples include mint, citronella (again), wormwood, eucalyptus, thyme, basil and garlic.

If you don’t have a garden – or are not a gardener – then another possibility is to make a DIY peppermint spray. Add a tablespoon of peppermint oil into half a litre of water in a spray bottle and spray it around your picnic area before you start eating. Wasps don’t like the smell of peppermint so hopefully this will keep them away. Unfortunately you may also find your cheese sandwich tasting of peppermint. And your salad. And your chocolate cake. But hey, life isn’t perfect.

If neither of the above work, and wasps appear and start being party-poopers, you might be tempted to grab a fly swat or rolled-up newspaper. However, think twice before you do, because you may be making things worse. Sudden movements can easily enrage wasps, and angry wasps are more likely to sting you. Also, a dead or dying wasp emits an odour that will attract all of its buddies to the scene of the crime. So if you do kill one, immediately dispose of the body, just like in the crime movies.

The best thing to do is the most difficult – stay as still and calm as possible. Wasps are sensitive to movement so flailing your arms around like a windmill in a hurricane is likely to make matters worse. The insects will see you as a threat and may start attacking.

Hopefully this won’t happen to your picnic, but it could happen if you are in the park or in the countryside and you disturb a wasp’s nest. Wasps are very protective of their nests and are likely to attack someone who blunders into their nest, however accidentally. The best thing you can do is to run away as fast as you can. Try to reach shelter, such as a building or a vehicle.

After you have found shelter and are safe, it could be wise to phone the emergency services, in this case the fire brigade. The swarm may still be in the vicinity, and if they attack someone who is allergic to wasp stings, it could be a matter of life or death.

Here’s the advice from the St. John’s Ambulance service:

Coming soon on Discovering Belgium: why wasps are good for the garden; the rise of the Asian hornet; and the first sighting of a mammoth wasp in Belgium! Any questions, drop me a line.

8 thoughts on “How to deal with wasps”