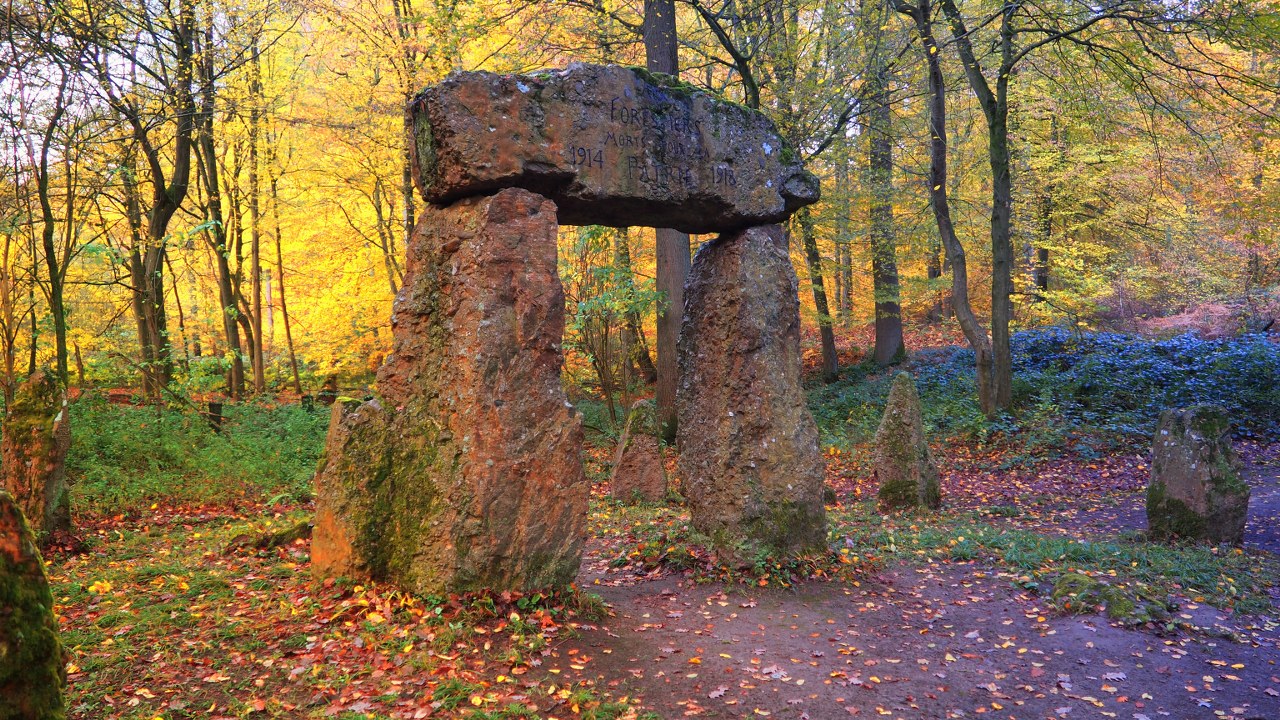 A Belgian Stonehenge? Surely not! But look at this mysterious megalithic stone circle deep in La Forêt de Soignes just outside Brussels. Could it be the little Belgian brother of the famous Stonehenge in England?

Last Saturday afternoon I took advantage of a glorious autumn day to go walking in an area of La Forêt de Soignes that I have never covered before. It was a super afternoon. I will share the complete 14 km walk in a separate post. For the moment I want to focus on something surprising that greeted me in the woods. I turned a corner and what did I see?

I moved closer. Were my eyes deceiving me?

No, they were not. I was most definitely looking at an ancient stone circle. What was this that I had stumbled across? Moving closer, I could see that the headstone had an inscription.

No, this is no ancient Neolithic monument dating back to the times of the Druids. It is a memorial to Belgian forestry workers who died during the First World War!

And what a wonderful way to remember them! Natural stones in a beautiful setting. Each standing stone has the name of a forester inscribed on it.

The forester’s monument dates from 1920 and was the idea of the then Director-General of the Forests Department, Nestor Crahay. As the foresters came from different parts of Belgium, it was decided to place their monument in the most central forest of Belgium, the Sonian Forest.

It was financed by logging companies from all over the country as well as public figures and various associations. The monument was designed by artist Richard Viandier, who was inspired by the burial rites of the Celts.

The unveiling of the “Monument aux Forestiers” took place on 30 May 1920 in the presence of Baron Albert Ruzette, Minister of Agriculture, and Count Henri Carton de Wiart, Minister of State, later Prime Minister.

As material, Viandier used a natural stone from the Ardennes, the Wéris pudding stone or poudingue de Wéris. This type of stone is a natural concrete, consisting of pebbles, quartzite and flint, surrounded by a layer of hard sandstone. This rock comes to the surface on the plateau of Wéris, near Durbuy in the province of Luxembourg.

The choice of this material was no coincidence. In Wéris this pudding stone had been exploited by man since prehistoric times. It was used to build the prehistoric megaliths of Wéris, a collection of dolmens and menhirs from about 2500 B.C. It was thus the ideal material to make a monument in megalithic style in 1920.

The solid stones weigh several tonnes. They were transported from the quarry in Wéris to the station of Barvaux-sur-Ourthe. Carts were pulled by 10 to 14 horses. By train the stones went via Liège to Brussels, where sturdy wagons were again used to take the stones to their final destination.

It’s not the only memorial in the Forêt de Soignes that I came across on my walk. I also visited a memorial for the victims of the terrorist attacks of 22 March 2016 in Brussels and Zaventem. Check out my 2-Memorial Walk here. It describes the exact locations of both memorials and a walk that goes to them both.

33 thoughts on “Is this the Belgian Stonehenge?”