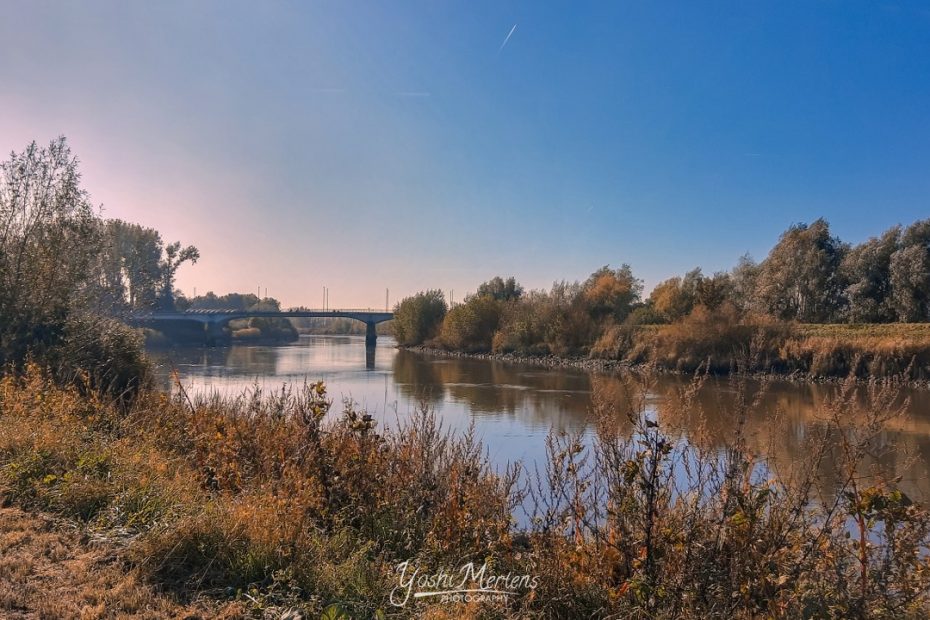 Here’s a post with a difference and a special treat for Discovering Belgium readers. I first came across Yoshi Mertens on Instagram. He’s a young and creative amateur photographer who takes beautiful photographs and has his own YouTube channel. He’s developed his own friendly style of introducing his local nature through appealing and interesting point-of-view videos. And he adds some great overhead drone shots. I asked him if he would be interested to make a short video for Discovering Belgium and he jumped at the opportunity.

The place he’s introducing us to is the Kalkense Meersen in East Flanders. This is a 600-hectare area of lakes alongside the northern bank of the River Scheldt, about 15 km to the east of Gent. It’s one of the most extensive nature reserves in Flanders and is criss-crossed by a network of footpaths. It’s a beautiful place for a few hours in the open countryside.

Below, I give you some routes and maps for walks of varying distances through the Kalkense Meersen. But first, here is the video that Yoshi has made for Discovering Belgium. I hope you enjoy it.

Please visit Yoshi Mertens on YouTube and consider subscribing and leaving a comment, either on this video or one of his many other nature photography videos. It will be interesting to see how his hobby develops. I believe he may have a bright future ahead of him.

As mentioned above, I’m giving you various alternative walking routes through the Kalkense Meersen, plus one through the neighboring Bergenmeersen that Yoshi also mentions in his video. Simply choose the distance that suits you. You can save and print each map as you see fit. All the GPX tracks are on my RouteYou page. Most of the walks use the numbered node system so are easy to follow. They are also color coded and signposted. Starting points are described on each map. For the walks starting from Schellebelle, you can either start from node no. 1 and take the foot passenger ferry over the Scheldt (which is fun), or you can start from node no. 2 on the opposite bank.

By public transport, the railway station at Schellebelle is about 1.5 km from the ferry and node no. 1. De Lijn buses 27 and 28 ride to Schellebelle village, and De Lijn bus 36 goes to Kalken village. There are cafés in both villages as well as in Uitbergen.

A big thank you to Yoshi! As I mention above, please subscribe to Yoshi Mertens on YouTube and leave a comment. In fact I’m disabling comments here, to encourage you to give your comments on his YouTube channel. You can also follow him on Instagram and Facebook. Good luck Yoshi with your creative endeavours. I look forward to seeing some more of your videos in the near future!

P.S. I hope you managed to clean your bike Yoshi!