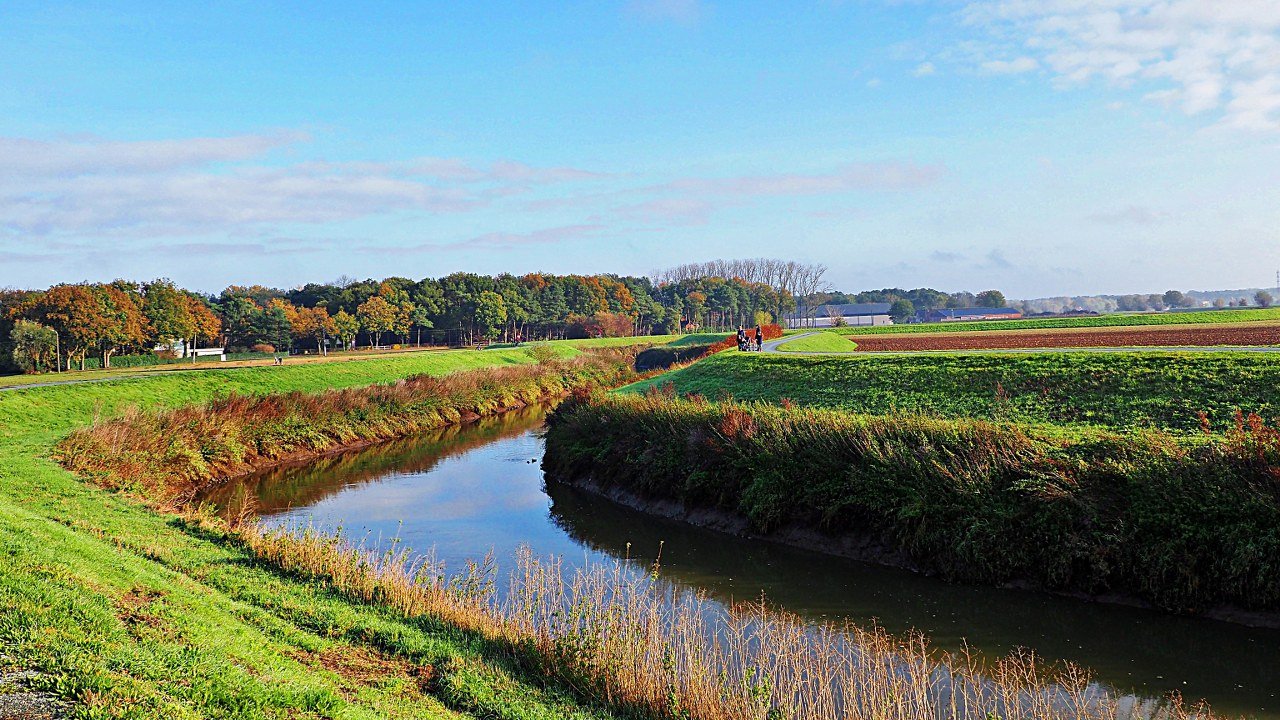 Three short walks and a longer one around Keerbergen, through the fields, heaths and forests, and along the River Dijle.

Keerbergen is interesting to walk around for various reasons. It has some lovely natural areas, and some delightful walks through woods and heaths and along the River Dijle. But it’s also interesting to see “how the other half lives.” Keerbergen is the richest municipality in Flemish Brabant and the second richest in Belgium. Some stretches of these walks take you through the suburbs where you can see some of the largest and most imposing villas in Belgium.

Also worthy of note is that Keerbergen had its own airport from 1932 to 1963. During the Second World War the airfield was used by a reconnaissance unit of the Luftwaffe. When the airport was closed down, the land was excavated and converted into a lake. However – unless a resident of Keerbergen can correct me – the lake is inaccessible. I can’t find a walk or cycle route around it. I’m sure the inhabitants of the villas around the lake get marvellous views over the water. But for anyone else, your best bet for a view of the lake is to visit The Lake Restaurant – if you have a big enough credit card.

The first walk I am sharing starts from the centre of Keerbergen. There’s plenty of free parking on the Gemeenteplein. The village is well served by buses. There’s even a bus (De Lijn 270) that goes direct to Keerbergen from Brussels central station. Below is the map of the walking route. As always: click to embiggen; download as a PDF; get the GPX track from RouteYou.

You’ll see from the map that the route is part of the walking node network with its numbered junctions. It’s child-friendly; the route is mainly on footpaths or quiet lanes. It’s also 100% buggy/stroller-friendly. And it’s well supplied with the occasional bench.

This walk is also 100% buggy/stroller-friendly, and it also follows numbered junctions. By car you could park close to junction 99 by the Oude Hansbrug bridge over the River Dijle. By bus, if you’re on the 270 from Brussels that I mentioned above, get off at the Keerbergen Hansbrug bus stop.

At the Oude Hansbrug there used to be a super and popular café that was much loved by hikers and cyclists. I often dropped in there for a refreshing drink while cycling along the River Dijle. Unfortunately a change of ownership resulted in it being converted to a Chinese restaurant. Somehow, dropping in for a Peking Soup or a Vietnamese Spring Roll doesn’t hold the same fascination for me. But for you it might be the perfect end to an afternoon hike.

The Oude Hansbrug is worth a second glance. A wooden bridge here already existed back in the 13th century. In the 19th century it was replaced by a cast iron riveted bridge with a fixed section on the Keerbergen side and a retractable section on the Haacht side. During the First and Second World Wars it was repeatedly destroyed and restored. In 1958 it was pensioned off and a new concrete bridge 200 metres downstream was built to take the traffic. The old bridge was left to rust and decline until eventually it was unsafe even to walk or cycle over it. But in 2005 a new bridge was constructed; an exact copy of the original iron bridge! So well done to the authorities for restoring a bit of history in the region.

Below is the map. As always: download as a PDF, click to embiggen, get the GPX track from RouteYou. You’ll see that half of it goes alongside the River Dijle while the other half is on small lanes.

This walk is not in the node-to-node walking network. However, it’s very clearly signposted, although only in one direction (clockwise). Most of it is buggy/stroller-friendly although there are a couple of stretches that might be difficult after rain. And there are two gates you will have to lift the buggy over.

I am adding this walk for the sake of completeness. If you really are at a loose end in Keerbergen, have done the other two walks, and you have 90 minutes free, then you might enjoy this walk. But personally I didn’t find it interesting. Around 80% of it is around the suburbs of Keerbergen, and after a while I was beginning to get tired of looking at huge villas. Only 20% is in the countryside. Still, you may have another experience.

You could start anywhere along the route. At the weekend you could park outside the school at Nieuwstraat 100. It doesn’t seem to be accessible by public transport. Below is the map which you can download as a PDF or get the GPX track from RouteYou.

Now you may be thinking you would like to walk more than 6 km. If so, then I have combined the Broekelei and the Piervenshoek walks into a 16 km “Broekhoek” Walk. Below is the map which you can download as a PDF or get the GPX track from my RouteYou page. The walk starts and ends from the Gemeenteplein Keerbergen as described above in the Broekelei Walk.

So there you are, four walks around Keerbergen: three short 6 km walks and a longer 16 km one. Let me know how you get on. Any questions on this or other walks: just contact me or drop me a WhatsApp message:

If you would like to subscribe to Discovering Belgium and get new walks straight into your inbox, add your email below:

And if you find Discovering Belgium useful, and you enjoy downloading the maps and instructions, please consider buying me a virtual cup of coffee to contribute to the running of this blog. Thanks! Denzil

5 thoughts on “Four walks around Keerbergen”