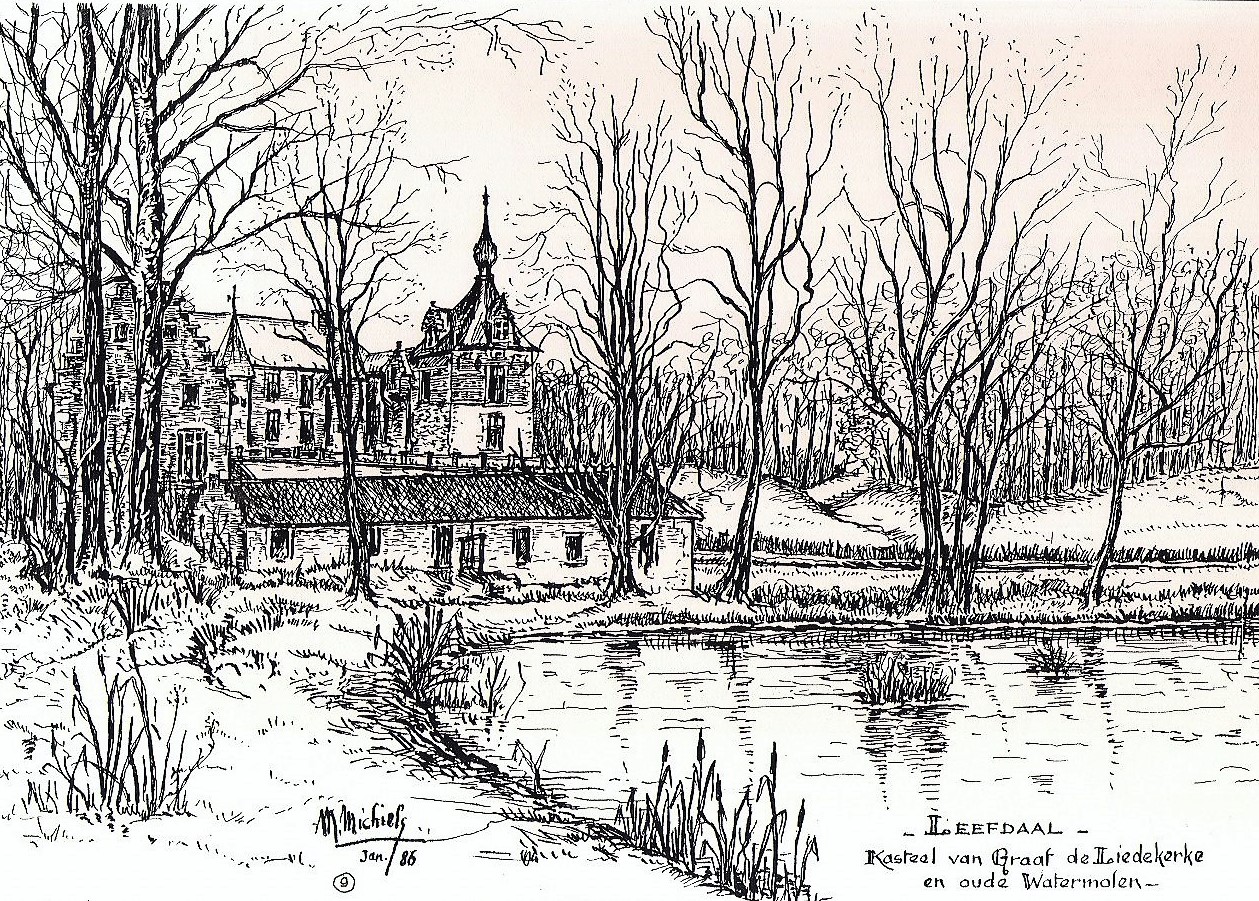 Walk around Leefdaal and enjoy visiting a castle, a watermill, a lake, and a strange sport!

Leefdaal is a small village located 15 km east of Brussels and 8 km west of Leuven. Unless you live there, you have probably not heard of it. But it’s worth exploring, and here I describe an 8-km walk that is ideal for a morning or afternoon.

Leefdaal is accessible by public transport. Take De Lijn bus 315 from Kraainem metro station or 410 from Brussels North railway station. If you’re coming by car, you can park opposite the church, which is the starting point.

So get your boots on and let’s walk around Leefdaal together on this 8 km route (downloadable map as PDF here):

There’s no certainty about the origin of the name Leefdaal. “Daal” means valley, but “Leef” is less clear. One possibility is that in the language of the Celts, who used to inhabit this area, the River Voer was called the Lovanna, which was later shortened to Leef.

Sint-Lambertus church dates back to the late 12th century. It has been renovated many times since then, and little of the original building exists. The Gothic chancel and nave date from the 16th century, after a fire had ravaged the building. The tower was rebuilt in the 17th century and the side aisles extended in the 18th century. It’s named after Lambertus, Bishop of Maastricht, who was an active missionary in this area. He was brutally murdered in LiÃ¨ge around 700 while conducting a mass.

Leave the graveyard via the steps at the rear of the church and you will find yourself in Kerkring. A magnificent lime tree overshadows two houses which date from the 18th century; no. 1 used to be the chaplain’s house. Follow the path through the Kasteeldreef, a beautiful drive lined with lime and beech trees.

You may be wondering what on earth the two tall poles are in the field on your left? They are for the Belgian type of archery called “wipschieten”. The “wip” is the target (a block of wood with feathers stuck in it) at the top of the pole.

Archers stand underneath the pole and shoot arrows upwards to try and hit the “wip”.

Thankfully the arrowheads are corked to prevent injuries when the arrows come back down!

The building on the right-hand side of the Slagberg is an old watermill.

On your left is the imposing Leefdaal Castle. The original castle was probably built in the 11th or 12th century by the Lords of Leefdaal to provide some degree of protection to commercial travellers passing along this section of the important Bruges-Rhineland trade route. The only remnant of that castle is a cellar under what is now the garden. The castle was restored in the 17th and 19th centuries.

Opposite the castle is a small lake, built by Graaf Honore de Liedekerke, a former owner of Leefdaal Castle. When I was there it was incredibly noisy, with the croaking of hundreds of frogs. I could also see the nests of great crested grebes – large floating mounds of vegetation – and hear the loud and strange trills of the little grebe.

The pretty little footpath winds alongside the River Voer.

On your right is a large building that used to be a big exporter of “witloof” (Belgian endive or chicory). Belgian endive was only “discovered” in 1850. Depending on the source material you read, either a gardener at the Brussels Botanical Gardens or a farmer threw some wild chicory plants into a dark shed. Three weeks later, he was surprised to find a strange-looking white-leaved plant growing. It was the start of what the Belgians call “white gold.”

Saint Verona lived in the 9th century and was the daughter of the German emperor Lodewijk. According to legend, while looking for the grave of her twin brother Veroon, Verona took a rest at a roadside chapel in Leefdaal. Here, the voice of God apparently revealed two secrets to Verona: she could find her brother’s grave in Lembeek; and she would be buried underneath the chapel in which she was resting. She went on her way and found her brother’s grave — in Lembeek — before returning to her native Rhineland, where she established a number of convents before dieing in the year 870. Her body was then brought by oxen to Leefdaal.

I. The Leafy Glade

Poelstraat is actually a wonderful leafy glade. I’ve been down here on a sunny spring day and it’s full of butterflies. Unfortunately today it was 10Â°C and any sensible butterfly was keeping its head down.

J. Up on the Farmland

Then it’s up on the rich farmland to continue our walk around Leefdaal. The farmland stretches from Leuven way behind you until Overijse far in front of you. Along this path you have some marvellous views over the villages of Vossem, Leefdaal and Bertem, with the Meerbeek radar station in the distance.

I had mixed feelings about the farmland. Some of the larger fields were pretty deserted and silent. Occasionally I heard a skylark or saw a yellow wagtail, but that was generally all, although I did spot four hares in the distance. However, where hedges or copses had been left standing, the birds were singing. I even heard an icterine warbler, which is quite unusual.

After that the path meanders back down into Leefdaal village. So if you want a couple of hours exercise and fresh air in a varied landscape, I can recommend this walk around Leefdaal. As you can see from the map, you can make various shortcuts if you have less time available. Any questions, just drop me a line.

Dieter The Photographer has been busy in Leefdaal and has produced this short but lovely video account of his recent visit. You’ll have to click the link and then click again to view it on YouTube:

34 thoughts on “A walk around Leefdaal”