When the University of Leuven Library was burnt down – twice! 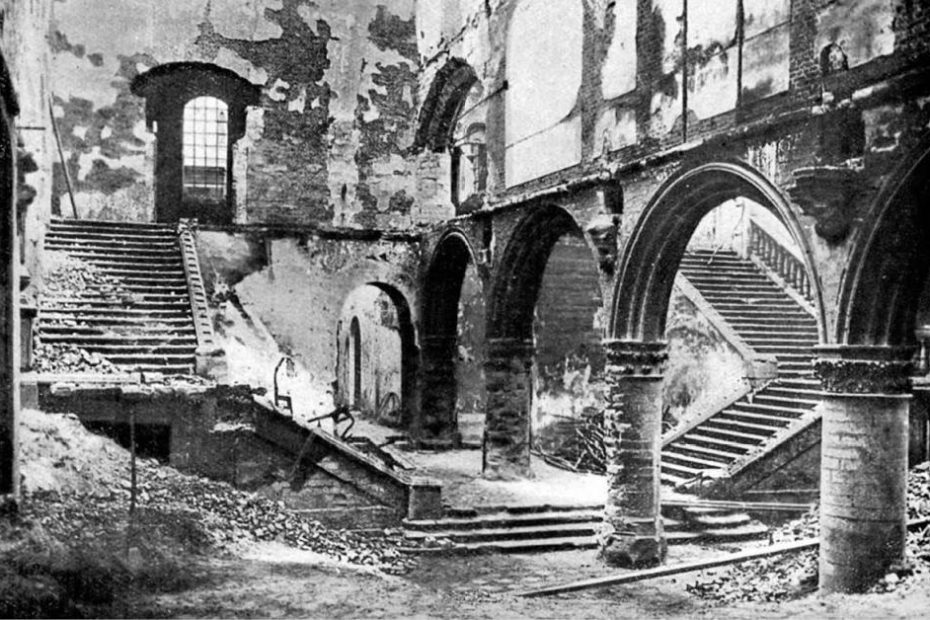 The burning of the University of Leuven Library in 1914 led to the loss of over a quarter of a million books and manuscripts. 26 years later it was burnt down again.

In my last post I wrote about the 1566 iconoclasm in the Low Countries. Here I describe two other major acts of destruction that devastated a part of Belgium and led to the loss of lives, property and valuables.

Three hundred and fifty years after the iconoclasm, Leuven was a wealthy university city with a rich architectural heritage. The University of Leuven Library, located in the 14th-century cloth hall, was a particularly fine building. Founded in 1425, it possessed exceptional collections. These included theological literature from the early Christian period, medieval manuscripts, and writings from the golden age of humanism.

On the morning of 19 August, 1914, German troops arrived in Leuven. The city authorities were well prepared. They had confiscated all weapons in private hands and published warnings that only the Belgian army was entitled to take military action (although it had already left the previous day). The reason for these measures was the news of the cruelties perpetrated along the invasion route: 640 civilians killed in Liège; 156 in nearby Aarschot.

Over the course of the day, infantry filed into the city. They were followed by artillery, ambulances and mobile field kitchens. The German 1st Army made Leuven their headquarters, and many of the 15,000 troops were billeted with the locals, who had to supply food and drink.

All remained peaceful until the evening of 25 August, when a train unexpectedly pulled into the station. German soldiers, thinking it was carrying enemy troops, opened fire. Other troops stationed in the city thought that Belgian civilians were shooting and immediately rushed into the streets and started firing into their houses. The train was actually carrying a retreating German unit that had come under attack from the Belgian army in the north, but in the absence of this information, panic broke out.

Terrified inhabitants were dragged out of their homes, beaten and shot. Executions were carried out on the mere suspicion that someone had fired. The dead were dumped in ditches. Houses were set on fire.

Close to midnight, troops broke into the Catholic University of Leuven Library and set it, too, on fire. By dawn, little remained of the building and its collections. The library remained burning for several days. In addition to the loss of 300,000 volumes, the professional documents of 58 notaries, solicitors, judges, doctors and professors were lost.

In all, 248 citizens of Leuven were killed during the destruction of Leuven, and 1,500 were deported to Germany by rail on cattle trucks.

“The town was as dead. Nothing could be heard to break the profound silence except the sinister crackle of houses on fire.”

After this, for eight days, the city was ransacked, with troops taking furniture, works of art, silverware, linen, musical instruments and wine. Whatever could not be carried off was broken.

The destruction of Leuven aroused international indignation. The Dutch newspaper the Nieuwe Rotterdamsche Courant wrote: “It is so terrible that the whole world must take note of it with the greatest sadness.” Intellectuals in Italy condemned the “cultural atrocities,” and 40 journalists protested publicly against the “barbarity”.

After the war, the Americans took charge of building a new home for the University Library. Under the Treaty of Versailles, Germany was required to donate 13 million marks’ worth of books in reparation. A new site was chosen – Ladeuzeplein – where the new library was built from 1921 to 1928. It was designed by the American architect Whitney Warren in Flemish neo-renaissance style. By 1939, there were some 900,000 volumes on its shelves.

However, on 16 May 1940 it was reduced to ashes once more. The exact events are shrouded in mystery. It was certainly a confusing time; at one stage the British army was retreating from the west of Leuven while the German army was advancing into its eastern suburbs.

There is a verified story that German artillery officers east of Leuven asked a local farmer to point out the American library in Leuven so they could shell it. Traces of shells were certainly found in the tower, and the German army was always quick to destroy Allied war monuments from the First World War, so there might be some truth in the story. On the other hand, traces of petrol were found in the burnt-out store rooms, suggesting arson.

The damage was even more extensive than in 1914. Almost one million volumes were lost – three times the previous number. Among them were specimens of every book printed in the Netherlands in the Incanabula (pre-1500) period and huge collections by German scholars from the 1920s.

If a human face can be put to the Flemish spirit to rebuild after the severe destruction of Leuven, then it’s that of Monsignor Etienne van Cauwenbergh, the long-suffering head librarian of the University of Leuven Library from 1919 to 1961. Not just once, but twice he had to rebuild and restock his library from the ashes.

19 thoughts on “When the University of Leuven Library was burnt down – twice!”