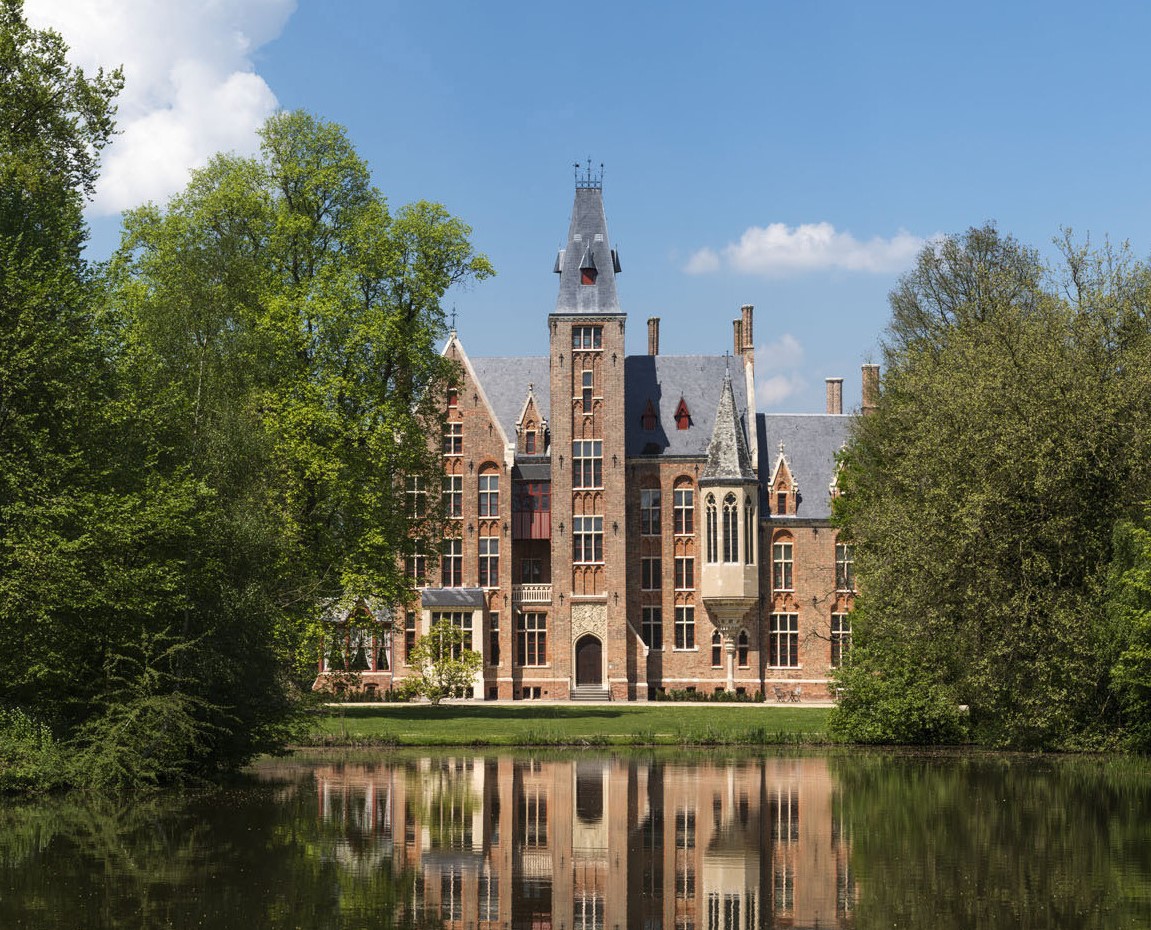 The original Loppem Castle was built in the 17th century and destroyed in the 18th. A century later, in 1856, Baron Charles van Caloen and his wife, Countess Savina de Gourcy Serainchamps, appointed the English architect Edward Pugin to draw up plans for a new castle on the site of the original one.

Unfortunately, Pugin’s style was just too English. Van Caloen wanted a more Flemish look to his castle, so called in his friend Jean de BÃªtune to amend the plans. Construction of the castle was completed by 1863. The result is an excellent example of the Flemish neo-Gothic style. Indeed, the castle’s architecture, interior decoration, and even its furniture are all designed in the same style. This makes it quite unique, as many Belgian castles are a bit of a mix of allsorts.

Billiards in the hall

I was most struck by the huge entrance hall. With a height of 17 metres I felt like I was entering a church.

Its design later acted as model for the Bruges town hall, which doesn’t surprise me. It was also where van Caloen and his guests played billiards. The original table is still present, but I curbed my enthusiasm for the game and didn’t pick up a cue.

A royal visit to Loppem Castle

Moving up the handmade oak staircase and banisters, interesting rooms on the first floor are those used by the Belgian King Albert I and Queen Elisabeth during their stay at Loppem. This was at the end of the First World War, when the Belgian royal family requested that the castle be temporarily made available for their use.

They arrived on 24 October 1918, and Loppem Castle became the headquarters of the Belgian army and an international meeting point. Notable visitors included the French President and Marshal-Admiral Prince Yorihito of Japan.

While at the castle, King Albert I formed the “Loppem Government”, and made two important decisions. He decided that everybody should have the right to vote, and he signed a paper to make Flanders officially Dutch speaking.

However, the bed in the King’s room was not used by him, as he insisted on sleeping on his own camp bed. This was not surprising as during the war King Albert frequently fought with his troops and shared their dangers and discomforts, while Queen Elisabeth worked as a nurse at the front.

This exhibition wasn’t displayed when I visited, but runs from now until 11 November 2018. It covers themes such as Loppem, the Caloen family, the occupier, the royal family, the political story and “Liberation and heroes, mourning and reconstruction”.

It displays old documents, photographs and souvenirs from this period, including objects that belonged to the King. Some of the exhibits belong to the castle; others have been loaned from various museums, archives and private collections. If I get the opportunity I will return to the castle and check out this interesting exhibition.

On the ground floor

The Charles Boromeo sitting room contains a number of frescoes by German painter August Martin representing episodes of the Crusades. The dining room contains an impressive collection of Gien porcelain. The kitchen displays old kitchen implements such as waffle irons, biscuit moulds, oil lamps and an earthenware vessel in which watercress was grown.

I also enjoyed the Jean and Roland van Caloen art collection, many of which have been collected on the family’s travels. I was particularly drawn to a 16th century wooden carving of the Garden of Good and Evil; collections of ivory from Goa and alabaster from Mechelen; and the 1571 triptych “Jesus amongst the doctors” by Frans Pourbus the Elder. There is also an interesting collection of Asian and African art.

In the castle park

The castle park was created in English landscape style before the castle was built. The old ramparts were dug out and converted into a lake, and a kitchen garden constructed. I enjoyed walking in the peaceful park and enjoying the views of the castle from its grounds.

In 1873, the brothers Albert and Ernest van Caloen designed and planted a maze of green and copper hornbeam. I can vouch that it’s remarkably easy to get totally lost in it.

In 1952 the castle and park became the property of the Jean van Caloen Foundation. The castle is open to the public but the hours change per month so it’s advisable to check out the opening times.

So that’s Loppem Castle for you. If you are visiting Bruges and fancy a bit of peace away from the city’s bustle, this will replenish your batteries. It’s also a perfect stop-off place if you’re journeying through Belgium. Or if you just want to discover a bit more of Belgium’s history, particularly during the First World War.