Madhouse at the End of the Earth, by Julian Sancton – A Review 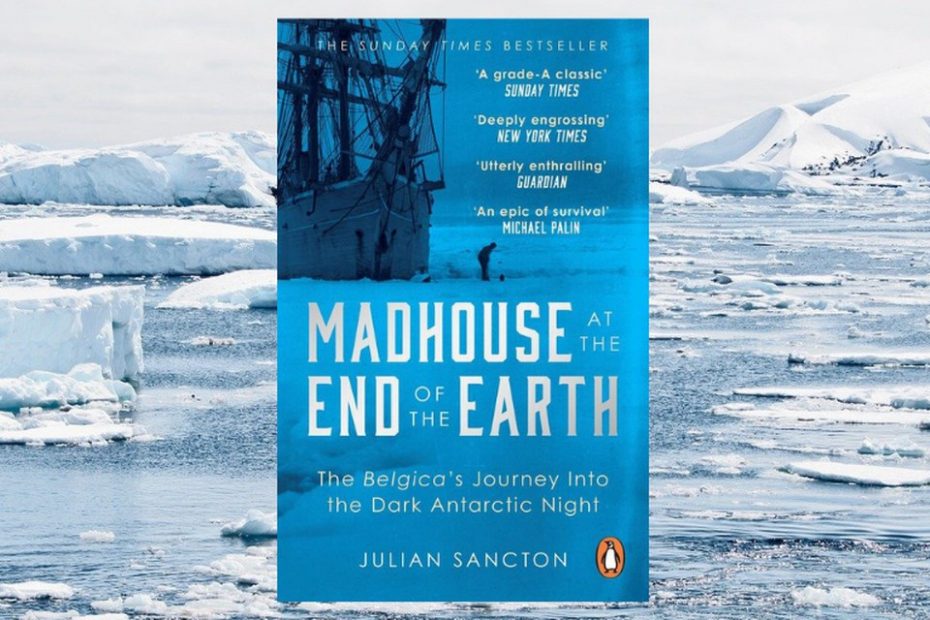 Madhouse at the End of the Earth is an enthralling account of the Voyage of the Belgica during the 1897-1899 Belgian Antarctic Expedition.

Madhouse at the End of the Earth is an excellent book that I thoroughly enjoyed. It offers adventure, mutiny, danger, insanity, courage, and humor. And to my surprise it included detailed insights into the young Roald Amundsen. Its subject is the Belgian Antarctic Expedition, 1897-1899, which I covered here.

The opening of the book is a surprise. You might be expecting an account of a Belgian expedition to the Antarctic to start in … Belgium or the Antarctic. And probably around the end of the 19th century or before. But no, it opens in the Leavenworth Penitentiary in Kansas, as late as 1926.

Inmate #23118 is a 60-year-old doctor. He’s three years into a 14-year prison sentence for fraud.  He receives a visitor, and the two begin to reminisce. And now events turn towards the Antarctic, almost three decades previously. Events that formed a close and lasting friendship between these two men.

The prison meeting introduces possibly the two main characters of a story that is rich in characters. The visitor is none other than Roald Amundsen, the great Norwegian explorer who was first to the South Pole in 1911. The prisoner is Frederick. A. Cook, who was described in The New York Times as “among the greatest imposters of the world.” He was the American doctor who claimed to be the first man to reach the North Pole. Later this feat was proved to be false, as were many other feats of Cook.

As the book progresses, the friendship between these two develops. The two played key roles in how the expedition turned out.

Amundsen and Cook are not the only characters. The book abounds with fascinating men and their stories.

One is expedition leader Adrien de Gerlache de Gomery. Enthusiastic, adventurous, patriotic, with the intention either of finding the magnetic south pole or, failing that, getting further south than anyone had previously travelled. But he’s not a great leader of men. He struggles to pick skilled sailors, and some of those under his command push him to his limits.

Unsurprisingly, things go wrong from day one. I won’t spoil the plot, but will say that the book details an amazing series of setbacks. Spending the winter on an Antarctic ice floe was probably the biggest one. How many will survive?

You’ll read how Amundsen treats every adversity as a learning opportunity.

“Amundsen, who dreamed of being a world-famous polar explorer, approached the expedition as training. The more grueling the conditions, the more he felt he was getting out of it.”

Later he will use his skills and experiences on the Belgica to beat Captain Robert Scott to the south pole in 1911.

Meanwhile, Cook is devoting time to get to know his shipmates, far beyond the typical professional interest of a doctor in the late 19th century.

“In taking an interest in the well-being of every man aboard, crew and officers alike, Cook soon became the most popular member of the expedition.”

Madhouse at the End of the Earth is a thrilling book, easy to read, and gripping, The author, Julian Sancton, cleverly weaves excerpts from the many diaries of the crew members into the story. Some of them conflict, but he doesn’t shy away from this, merely placing them side by side. They emphasize the fact that we all have different experiences of the same event.

The author also looks at the future paths of Amundsen and Cook, which went in such opposite directions. It explains why Cook was locked up in a Kansas penitentiary, and how Amundsen achieved his polar goals.

However, be warned! You may suffer both light and sleep deprivation yourself as you read this book. It may keep you up, long into the cold dark night!

Madhouse at the End of the Earth by Julian Sancton is published by Ebury Publishing. Thanks to Daniela for sending me a digital copy to review. It can be purchased from Amazon Belgium.

Disclosure: As an Amazon Affiliate I make small commissions from certain items sold by Amazon through links on Discovering Belgium.

7 thoughts on “Madhouse at the End of the Earth, by Julian Sancton – A Review”