Walking around the megaliths of Wéris 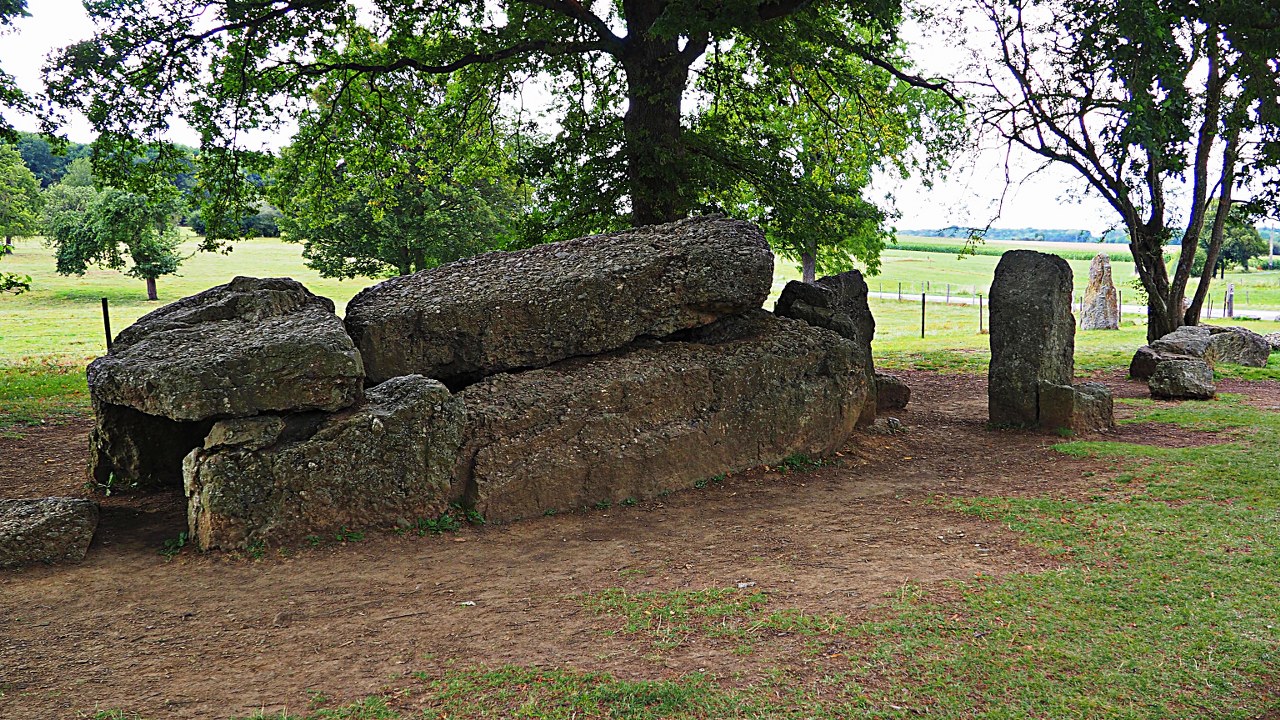 A trip into the very distant past. Discover the megaliths of Wéris from 2500 BC on a short 6 km walk or a longer 18 km hike.

In a previous post, on the “Belgian Stonehenge,” I mentioned that those monuments in the Forêt de Soignes were made from pudding stone mined from Wéris in Wallonia. Recently I took the opportunity to visit Wéris itself, on a 18 km walk around the region. On my way I dropped in to see the prehistoric megaliths of Wéris. These include a fine dolmen (burial tomb) and some menhirs (standing stones) from about 2500 B.C. If 18 km is too far for you, I suggest a shorter alternative of 6 km.

Starting point is the pretty little village of Wéris, which belongs to the municipality of Durbuy. It’s listed as one of Les Plus Beaux Villages de Wallonie. So if you have time before or after your walk, it’s worth checking out the village to see for yourself why it’s so beautiful.

You may want to kick-off the walk by paying a visit to La Maison des Mégalithes in the village square. Actually you will literally have to pay to visit (3 EUR). Due to COVID-19 I was reticent to enter the place myself. But if you do you’ll find introductory information, videos and exhibits about the area, and in particular its prehistoric monuments.

Wéris is known as the center for menhirs and dolmen in Belgium. These were erected by the then Neolithic inhabitants some 4500 years ago. As I mentioned earlier, they are made from the local pudding stone. I don’t know the etymology of the term “pudding stone” (poudingue de Wéris). If an archaeologist gave it that name because it reminded him or her of their favourite dessert, I fear for their teeth. Pudding stone is no light, aerated, sponge-like mix. It’s a kind of “natural concrete”: a composite of smaller stones and clay that has been compacted by pressure in the earth’s crust.

The dolmen were burial monuments; the deceased were laid to rest in a space and covered by large, flat stones – and then maybe also by earth too. You could spend a couple of days exploring the region and visiting the dolmen of Wéris, the Danthine menhir, the dolmen and menhirs of Oppagne, the Morville menhir, the Haina rock and the Devil’s bed. This hike visits just some of these.

Wéris isn’t easily accessible by public transport, although a local TEC bus service does run to the village, so car is the best option.

The first stage of the walk goes north-east from the village, and a steep climb through the woods will take you to the first point of interest,

There’s nothing modest or unassuming about this rock. According to legend, La Pierre Haina is the plug or bung that closes the entrance to hell itself! Unfortunately for the local Wérisiens, now and again the Devil wanted a break from Hell. So he’d crawl up a tunnel, push aside the big stone – La Pierre Haina – and wander at large in the countryside to do his evil deeds. Understandably, the Wérisiens weren’t too happy about this, so came up with a solution.

“If we paint the stone white – the colour of purity and goodness – then the Devil won’t dare touch it, and he will be unable to escape from Hell.”

That was their argument – and who can argue with that? So from then onwards, at each autumnal equinox, a group of Wérisiens head up to La Pierre Haina wielding a tin of white paint and a couple of paintbrushes.

This is the second stone to visit: the Devil’s Bed. This rock slab is where – yes, you’ve got it – the Devil took his rest after his devilish pranks, before he returned to Hell via the Pierre Haina.

I have to admit I found it a bit underwhelming. I was expecting something much more abominable. A rock hanging precariously over a cliff edge perhaps. Or a bed of stalagmites. Or a location with great views into villagers’ bedrooms. Le Lit du Diable looked just a bit too comfortable and respectable for a Devil! Anyway, leaving these stones and legends behind, I was quite pleased to head off into the Ardennes forests. I have to admit, I was tempted to glance behind me, just to make sure I wasn’t being followed by some ghoulish apparition. But I wasn’t. After all, La Pierre Haina looked as if it had recently been given a new lick of paint. So you’ll be safe too.

Leaving the forest, the trail opens up with some great views over the traditional Ardenne landscape that I love so much. And so will you.

And of course you won’t go far without wandering into some delightful Ardenne villages. Here are two of them.

In between the villages, there’s plenty of time to sit down and enjoy the views.

Then it’s time for the prehistoric megaliths of Wéris.

THE DOLMEN AND MENHIRS OF OPPAGNE

A dolmen is a type of single-chamber megalithic tomb, usually consisting of two or more vertical megaliths (prehistoric stones) supporting a large flat horizontal capstone or “table”. A menhir is a standing stone.

Human bone fragments collected from inside this dolmen confirm that at least ten individuals of different ages were buried here. Also discovered were scrapers, hammer stones and arrowheads dating from the Neolithic Period, as well as pottery fragments from the Bronze Age.

The original use of these menhirs is not known for certain. They could have been markers of grave sites, part of a sun-worshiping cult, or highly visible boundary stones. Personally I reckon they were the Devil’s toothpicks.

Below is the map of the route which you can download here as a PDF. You can get the GPX route from my RouteYou page. The walk is 18 km.

However, it could be that you just want to walk to La Pierre Haina and Le Lit du Diable, and check out the dolmen and menhirs of Oppagne. In that case, here is a shorter, circular 6 km walk that just takes you to these points of interest from the same starting point in Wéris:

You’ll find La Pierre Haina and Le Lit du Diable at A on the map, and the Oppagne dolmen and menhirs at B. On the other hand, maybe 18 km is not long enough? You can easily extend the southernmost leg by continuing south to Érezée. You could have lunch here as it’s the biggest village in the neighbourhood.

After exploring these megaliths of Wéris you may need some refreshment. When you’ve come full circle, you could always return to La Maison des Mégalithes, order a drink in the café, and sit in their garden:

If you need something more nourishing, opposite is Les Lanternes brasserie. Also, this area is well-known for being a good base for camping. There are a number of camp-sites in the vicinity. A good website for all sorts of helpful advice on tents and which one to buy is Camping Valley.

I hope you enjoy your walk around the megaliths of Wéris. If you have any questions about it, or would like to know the exact route for the longer version to Érezée, for example, just drop me a line. You can use the contact form or add a comment below.

And if you find the info and maps helpful, please consider buying me a cup of coffee! Thanks. Denzil

6 thoughts on “Walking around the megaliths of Wéris”