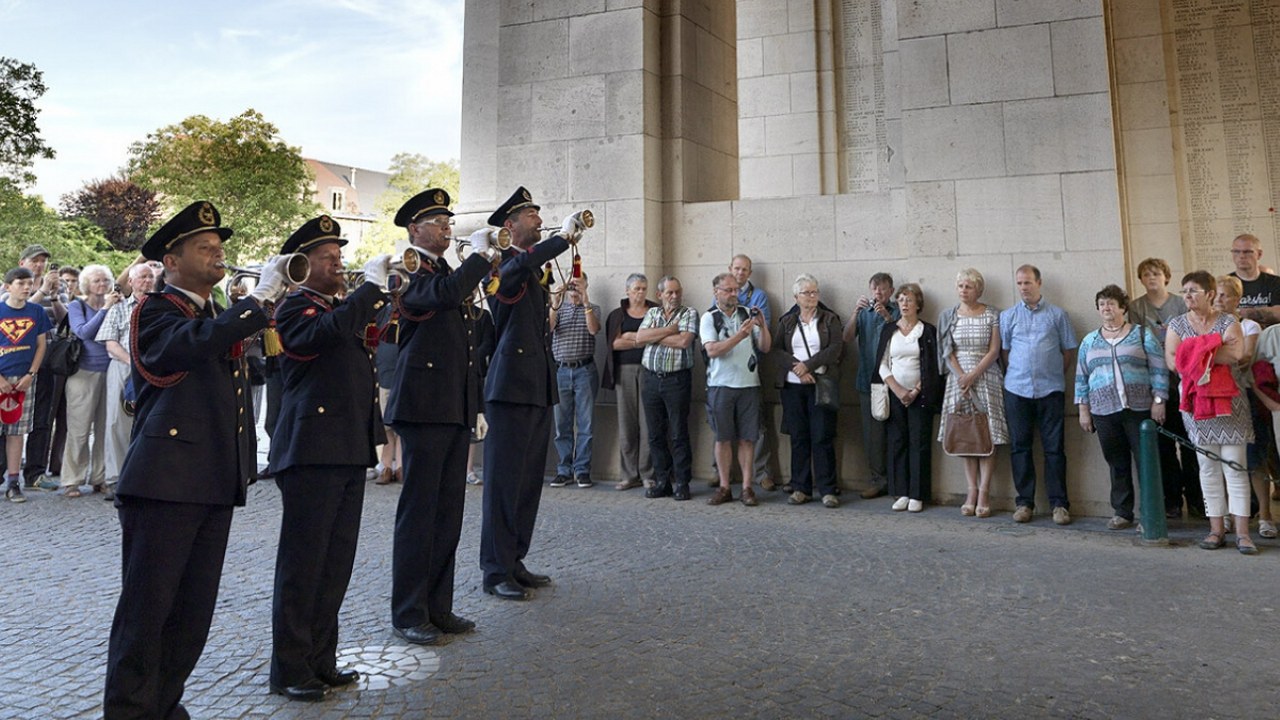 The history of the Menin Gate and the Last Post, an overview of Remembrance Day events, and where to see the LEGO Menin Gate!

The Last Post was first heard in Ypres on 2 July 1928 and continued until 30 September of that year. It restarted on 1 May 1929 and never stopped again (except for the period under German occupation during the Second World War. It has been faithfully played at the Menin Gate in Ypres by the buglers of the Last Post Association. This short, poignant ceremony remembers those who lost their lives during the First World War. The Menin Gate was chosen as location for this ceremony because it was from this spot that countless thousands of soldiers set off for the front. As we know, all too few made the return journey.

In Medieval times, the Menin Gate was originally called the Hangwaertpoort; a narrow gateway on the eastern side of the town. By the outbreak of the First World War in August 1914 the gateway had become known as the Menenpoort in Flemish or the Porte de Menin in French because it marked the start of the road leading to the town of Menen (in Flemish) or Menin (in French), about 16 km away. During the war, this road became known to the British Army as the Menin Road, and the gateway was called the Menin Gate.

It was guarded by two stone lions, which in 1936 were donated to Australia by the Mayor of Ypres as a gesture of friendship and an acknowledgement of the sacrifices of Australia’s soldiers. In 1917, as part of the 100th anniversary commemorations of the Third Battle of Ypres, the lions were temporarily returned to their symbolic home at the Menin Gate. Here they stood on display before being returned to the Australian War Memorial.

During the war, Ypres suffered considerable damage, and so too did the Menin Gate. In the spring of 1915 an intensive German bombardment on the town was carried out by long range, heavy German artillery, including the huge 42 cm howitzer nicknamed Big Bertha by the British Army. By 1917,  German artillery shelling had laid waste much of Ypres, although the Menin Gate was still standing, if only just.

INAUGURATION AS A MEMORIAL

The Menin Gate Memorial to the Missing was built between 1923 and 1927. It was inaugurated on Sunday 24th July, 1927 by Field Marshal Lord Plumer in the presence of Albert, King of the Belgians, General Foch of France, hundreds of local inhabitants, veterans of the First World War, and relatives of fallen soldiers. The ceremony was also broadcast on the radio in the UK, allowing millions to listen in.

The Memorial bears the names of 54,389 officers and men who fell in the Ypres Salient before 16th August 1917 and who have no known grave. The names are engraved in Portland Stone panels fixed to the inner walls of the central Hall of Memory, to the sides of the staircases leading to the upper exterior level, and on the walls on the north and south sides of the building.

The Last Post is sounded at the Menin Gate Memorial every night and in all weathers. The only exception was during the German occupation of Ypres from May 1940 to September 1944, when the ceremony was held at the Brookwood Military Cemetery in England. The ceremony resumed at the Menin Gate on the evening that Polish forces liberated Ypres, in spite of heavy fighting still going on in other parts of the town.

Depending on the evening, the occasion, and the participation of specific groups and individuals, the Last Post ceremony can include a parade, a call to attention, the Last Post, the Exhortation, one minute’s silence, the Lament, and the laying of a wreath. Generally the ceremony lasts around ten minutes.

Interestingly, it’s more popular now than 30 years ago or so. Until the 1990s it attracted the attention of barely a handful of visitors and the ceremony lasted a mere couple of minutes. Numbers only swelled during a special commemorative occasion or to mark the presence of a VIP.

After 1990, however, the extended version became the norm, and it attracted the attention of old soldiers’ associations, schools and historical groups. Such groups are often allowed to participate in the Last Post ceremony themselves. It’s rare nowadays for there to be fewer than 100 people present, and in the summer numbers can reach 1000. Naturally on Armistice Day the event is packed.

The Last Post ceremony takes place at 8 pm every day of the year. There is no entrance fee and no need for prior reservation. It’s a good idea to get there 20 or 30 minutes before the event begins. The Last Post Association give a lot of helpful information on their website, such as these questions and answers.

In addition to the 8 p.m. Last Post, on Armistice Day each year there is a special edition of the Last Post at the Menin Gate at 11 a.m. As space under the Menin Gate is limited to invited guests for this ceremony, a large projection screen on the market square is set up so that everyone has the opportunity to watch and listen to the music and words of the ceremony as it takes place.

If you are attending the 11 a.m. Last Post, you might be interested in the Poppy Parade which departs from Vandenpeereboomplein at 10 a.m. This is a wonderful opportunity for members of the general public to walk from St. George’s Memorial Church to the Menin Gate in a formal parade. You will pass through the arch of the memorial shortly before the start of the ceremony, and you can then stand in a specially allocated area east of the Memorial.

Here’s a nice home-made video of the 2018 poppy parade by local Andy Malengier:

Everyone participating in the Poppy Parade is offered a Royal British Legion Poppy Petal to carry in the parade. These are then collected in special baskets at the Menin Gate and released from the roof of the Menin Gate during the memorial service.

AND FOR THE CHILDREN?

Well, not only for the children of course… how about visiting the LEGO Menin Gate? It’s made from 54,000 LEGO bricks and took six months to complete (now that’s what I call a fun job!). Why 54,000? There’s a brick for every name on the memorial, which is a nice touch. In addition it has 250 LEGO figures depicting the Last Post ceremony.

The LEGO Menin Gate is at The Commonwealth War Graves Commission Ieper Information Centre, Menenstraat 33, Ypres. It’s just down the road from the Menin Gate.

Any questions about the Menin Gate, the Last Post or other World War One commemorations in Belgium, add a comment below or drop me a line.

Thanks to Jan Matsaert, Administration & Communication from the Last Post Association, for input into this article.

20 thoughts on “Visiting the Menin Gate for the Last Post”