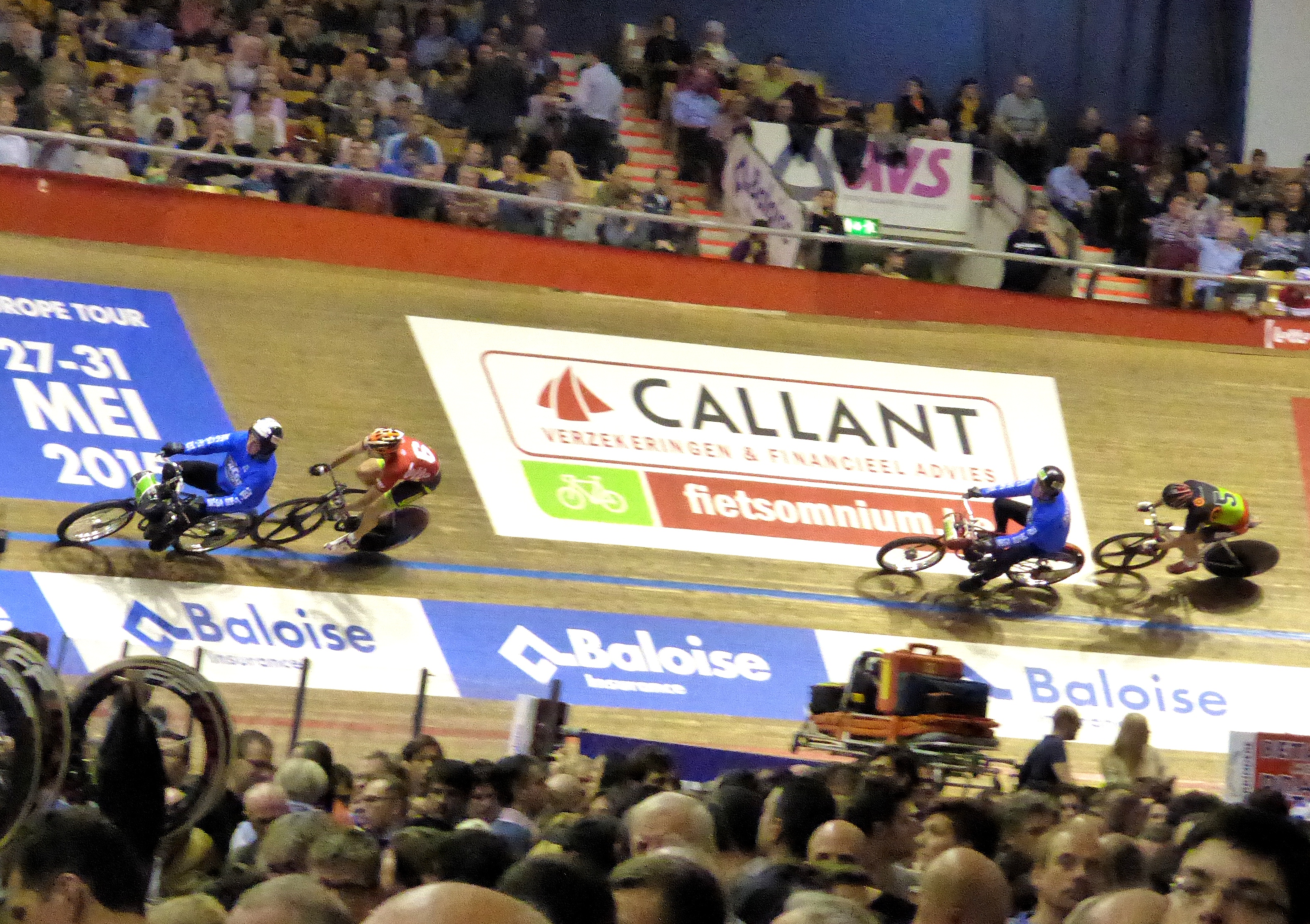 Kevin Mayne, Director of Development of the European Cyclists’ Federation (ECF) continues his guest blog on the Best of Belgian Cycling. Here he presents “Watching cycling with the Belgians — beer, frites and the most passionate fans in the world”

The Six Days of Ghent

In cold November take a daytime cycling tour of Ghent on your Blue Bike. Then for the evening book tickets for the Six Days of Ghent, the indoor spectacle of cycling that takes place at ‘t Kuipke, the indoor banked velodrome in the Citadelpark.

Teams of riders compete every evening for a week to cover the most distance in a series of team races and other events. In between the elite races there is an undercard of promising under-23 riders and top women track riders, each with their own series. It is a spectacle that combines fast and furious bike racing with a touch of professional wrestling. Music, lights, colourful costumes, man to man combat, speed and risk. In short, cycle racing as a variety act, but with real speed and strength too. Not surprising that it is loved by the Flemish, cycling’s most passionate fans.

Have beer and junk food, shout for the local heroes or someone from your own country, sing along with the music and emerge after midnight feeling as if you have been to a rock concert with wheels. You will be joined by coachloads of Brits on an annual pilgrimage to this cathedral of cycling.

Long before mountain bikes, some Europeans were so keen to continue racing through the winter they went cross-country riding and running with their road bikes. Although at times it was popular in France and Switzerland and has a growing US following, Flanders is the spiritual home of veldrijden, meaning field riding. This is definitely one of the Best of Belgian Cycling experiences!

From September to January the Flemish TV channels transmit the spectacle of running, jumping and woodland racing, ensuring that there is enough money to support a professional scene for men and women. All the organisers strive to give their events a unique character so the races pop up in some distinctive and sometimes spectacular settings.

Examples include the Duinencross Koksijde, set in the huge sand dunes of the North Sea coast, the Diegem Night-Cross which transforms an otherwise quiet suburb of Brussels into an amphitheatre of sport, or in a rare escape to Wallonia the Citadelcross, which uses the slopes of Namur’s giant fortifications. Other races take place on waterfronts and in national parks.

At the main races there is plenty of food and drink, big screens and even the sort of mass karaoke that seems to break out in Flemish after a few drinks. You have been warned!

Cyclocrossrider is an English language web site that gives a good introduction to the races and the news. The World Cup and Super-Prestige series are the main season-long competitions that feature the most celebrated venues.

The 2015 Tour de France is making one of its regular forays abroad, starting in the Netherlands and then travelling from Antwerp to Huy on July 6th. The arrival in Huy is a tribute to Belgium’s great contribution to road cycling, the Spring Classics.

The world’s top riders come to Belgium in March and April for a series of one-day races over the toughest terrain and in difficult weather conditions.

The Flanders Classics are famed for their terrible road conditions and cobbles, culminating with the “De Ronde” — the Tour of Flanders, this year on April 5th. After winding across the open country of West Flanders it heads into the Flemish Ardennes, the range of hills near Oudenaarde, south-west of Ghent. The race is superbly organised for spectators with shuttle busses to viewing areas at the top of the main hills. Away from race days, Oudenaarde has become one of the main cycling centres of the area with the Tour of Flanders Museum offering a history of the race, a cycling themed cafÃ© and a starting point for numerous cycle routes.

After Flanders the races go to Wallonia and the “Ardennes Week”, mercifully cobble-free but with the tougher hills and valleys of the Ardennes. My favourite is La Fleche Wallonne or the Walloon Arrow (Wednesday 22nd April, 2015). The centre of all the action is the Mur de Huy, the Wall. Rearing up from Huy town centre this steep hill is covered several times in the race and then provides the final uphill sprint for both men and women.

Which brings us back to the Tour de France. In 2015 the Tour will also finish on the Mur de Huy, where local hero Philippe Gilbert will be out for a win in front of his adoring fans. Wallonia awaits!

For more Belgian Cycling, check out the Tour of Flanders Centre and La Fleche Wallonne