The golden forests of Outrelouxhe 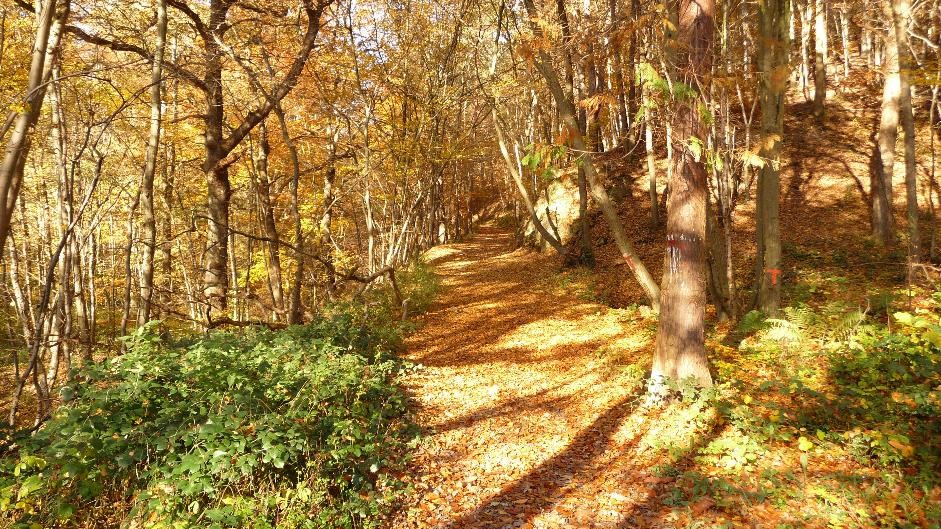 Deciding what to discover next in Belgium is often a hit-and-miss affair. There are so many places to explore. How does one make a choice?

Pulling out my maps of Wallonia, I settled on the one entitled Marchin/Modave, and upon opening it my eyes were caught by the name Outrelouxhe. Now wouldn’t that be an interesting place to write about! Unheard of. Unpronounceable. Unexplored. At least by me.

Of course, that wasn’t my sole prerequisite for a good hike. I also wanted a walk in the forests, to take advantage of the autumnal colours, alongside a river, and through some pretty Ardennes villages. Looking at the map, Outrelouxhe seemed to offer everything. It’s located about 5 km to the south-east of Huy. There’s a bus that goes to the village from Huy (TEC no. 97). As always, here is the map of the route, which you can download as a PDF, while the GPX track is available from my RouteYou page.

start from a church

I started from … yes, you’ve guessed, a church. This one was in the tiny hamlet of Rausa, just outside Outrelouxhe. From there I set off along the footpath to the right of the church, heading north-west, and the first sight I came across was this:

I’m not sure what he was looking for, and I didn’t have the heart to disturb him, but I quietly wished him well in his quest and went on my way. I then came across something much more recognizable. Any guesses?

Yes it’s mistletoe, just ready to be harvested and sold in shops over Christmas. Mistletoe is a parasite, inserting its roots into its host tree:

Some trees can be so heavily infected that they eventually die, which isn’t good for the tree or the mistletoe. They spread from tree to tree when birds eat the berries and wipe their beaks clean on a branch. The seeds get pushed into the bark and start growing.

the forest of St. Lambert

Speaking of trees, I was now into the depths of Bois de St. Lambert, and amidst some of the most glorious autumn colours I have ever had the joy to experience.

I mentioned a river, which in this case is the Rau:

Not a large one, but very picturesque amidst the autumn trees:

I also came across a huge rock outcrop where prehistoric tools dating back to 5000 BC have been found, and which was surprisingly difficult to photograph well.

I also ran into a strange sight in the middle of the forest. Miles from anywhere, on a footpath on which I had not seen a soul, in a small clearing was this:

And what about the village of Outrelouxhe itself? Well, despite the glamour that I had given it, it was really quite nondescript, although there were some lovely traditional Ardennes cottages.

The route I took was 11 km in length. It’s vaguely signposted, but I made a combination of two existing paths. Let me know how you get on.

And to receive more suggestions of walks in Belgium, just add your email below to subscribe to Discovering Belgium:

22 thoughts on “The golden forests of Outrelouxhe”