The Photographer of the Lost by Caroline Scott 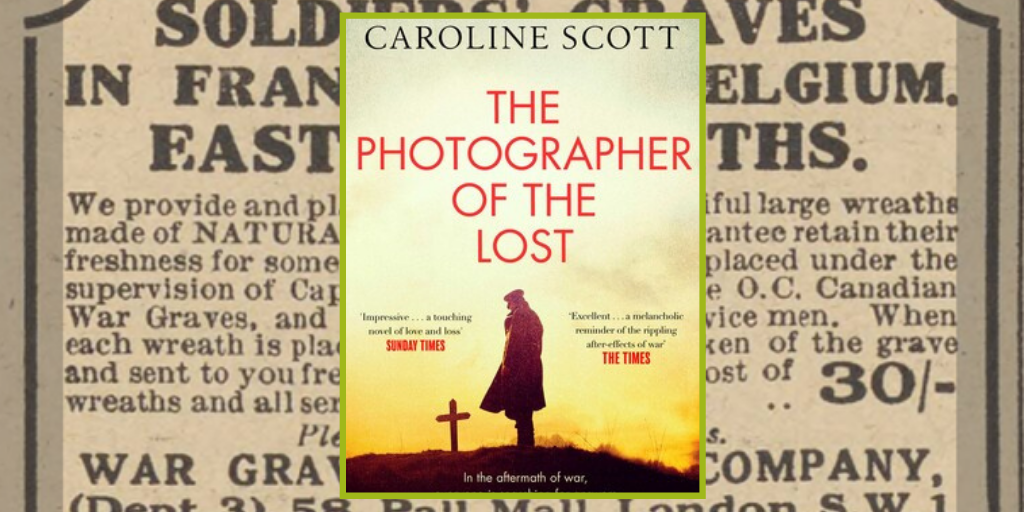 The Photographer of the Lost by Caroline Scott is an excellent and moving novel. It combines the loss, grief and devastation of the First World War with a wonderful human story of hope and redemption.

Next up in my series of posts focusing on the First World War in Belgium is my review of The Photographer of the Lost by Caroline Scott and an interview with the author. The book belongs to the genre of historical World War One fiction.

I highly recommend this book. The prologue hooked me; the storyline gripped me; the prose enchanted me. I really do not have anything negative to say about it. As one reviewer puts it: “It’s one of the best historical fiction WW1 books.” I can only agree.

Three years after the end of the First World War – so in 1921 – Edie receives an envelope containing a photograph of her husband, Francis, who has been missing in action since 1917. There’s no accompanying letter, no return address, and the postmark is smudged. In the photograph, Francis looks older than when she saw him last, when he was on leave. He’s in civilian clothes, standing in front of an unidentifiable war-damaged building.

The questions and the hope bubble up in Edie’s mind. Is Francis alive after all? Why hasn’t he contacted me? Where is he? Who took the photo? Who sent it? Why?

The story drifts back in time to 1916, when Francis and his two brothers, Harry and Will, arrive in France on their way to the Front. Through the book we follow their experiences on the Western Front.

Back in 1921, Edie, photo in hand, travels to the Devastated Lands of France and Belgium to look for her husband. It seems she is not alone. Many wives of soldiers missing on the Western Front have beaten this path. To asylums, for example, where hundreds of men are housed, having had their memories destroyed by shellfire. Many are physically disfigured. No-one knows who they are. We join Edie on her pilgrimage to Arras and then to to Houthulst, Ypres, Poperinge, Talbot House …

Meanwhile, her brother-in-law Harry, who survived the war, has become a “photographer of the lost.” He trudges from battlefield to cemetery, from bomb crater to hospital, commissioned by grieving relatives to photograph the grave – or last known location – of a fallen soldier. He hopes that such a photograph might bring some kind of peace and comfort to a wife, parent, sister, son or daughter … But does he know anything about Francis and the mysterious photograph?

Caroline skillfully weaves the two storylines into a gripping and deeply satisfying novel. She maintains the tension introduced at the start with the mysterious photograph. And all the main characters are totally believable. She has obviously done an immense amount of research to write a work of fiction that is so clearly based on fact. I recommend this for anyone with even the slightest interest in the First World War.

I never knew that “photographing the lost” was such a common occupation and even a paid job. So I asked Caroline if she could provide a bit more background into this.

When did this practice begin?

“From May 1915 bereaved families in the UK could apply to the Photographic Department of the Graves Registration Commission (this organization would later become the Commonwealth War Graves Commission) to have a photograph taken of their deceased soldier’s grave. Around 170,000 of these photographs were taken and dispatched to families, free of charge, between 1915 and 1920. This service was financed by the Joint War Committee of the British Red Cross Society and St John Ambulance. But, by 1920, the funding was exhausted and it was announced that this service would be ceasing.

“Demand for photographs of war graves wasn’t diminishing, though. Families who couldn’t afford to travel to the former battlefronts themselves, or who couldn’t face the task, still wanted proof that their loved ones were properly and respectfully buried. And so, from 1920, charities like the YMCA and the St Barnabas Society began to offer a photographic service, and commercial photographers stepped into this market too. As well as providing photographs of graves and locations, these companies offered to place wreaths in cemeteries and to send the original wooden grave markers on to families after they were replaced with the CWGC’s white headstones.”

Was it a mainly British thing?

“As far as I am aware, this was solely a British thing. In 1915 it was decided that the bodies of the British war dead would not be repatriated, and so, to help justify this decision, the Graves Registration Commission felt that it had to show that these men had been respectfully buried under named grave markers. The Commission decided to employ a team of photographers and began to systematically collect images of all the graves in the British military cemeteries. By 1920 bereaved families in the UK expected to be able to request a grave photograph. While the British dead were never brought home, in France and America the families of the dead were granted the right to have their soldiers’ bodies disinterred and transported home.”

How many photographers were involved?

“In addition to the charities offering this service, I’ve seen adverts from around a dozen commercial photographers.”

How much would a photo cost?

“It would cost about 30 shillings, on average. That’s more than most working men earned in a week. But this was far cheaper than making a trip to the Western Front. Without assistance from a charity, most working-class British people couldn’t afford to visit a war grave in France or Belgium.”

Were most of the photographers ex-soldiers?

“Yes. Some of the photographic companies specified in their adverts ‘all our staff are ex-servicemen’. Presumably there was an assumption that clients would see this as a guarantee of trustworthiness, and that due reverence would be applied to the task. Some companies sent photographers out from the UK on tours, but there were also several self-employed photographers who had stayed on in and were living in France and Belgium after the war.”

Thanks for providing some background to your story Caroline!

To discover more about war photography, check out Caroline’s article on the History News Network.

Caroline completed a PhD in History at the University of Durham. She has a particular interest in the experience of women during the First World War, in the challenges faced by the returning soldier, and in the development of tourism and pilgrimage in the former conflict zones. Caroline is originally from Lancashire, but now lives in south-west France.

The Photographer of the Lost is published by Simon & Schuster and is available from Amazon and other physical or online bookstores. In the US the book is called The Poppy Wife. (Disclosure: As an Amazon Affiliate I may make small commissions from qualifying products).

And if you like this, on 29 October 2020 Caroline’s latest book comes out: When I Come Home Again.

18 thoughts on “The Photographer of the Lost by Caroline Scott”