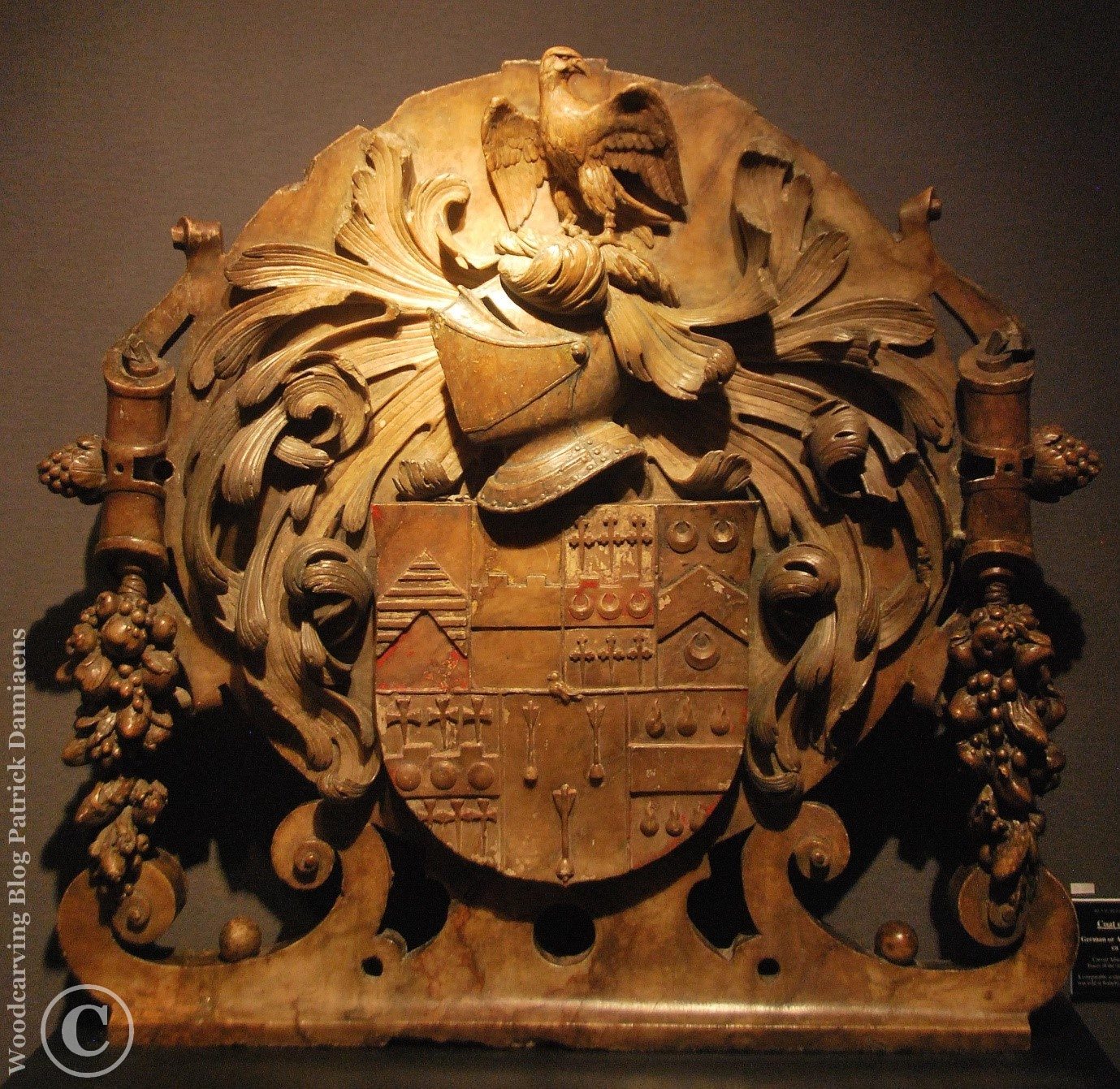 I have blogged about Patrick Damiaens, the talented Belgian heraldic and ornamental woodcarver, before, in this post. When he contacted me recently about some outstanding detective work he had done — following in the footsteps of famous Belgian detective Hercule Poirot — I knew this would make a fascinating post.

Every year, Patrick visits the Antica art and antiques fair in Namur. On a stand of a Flemish art dealer, his attention was caught by a magnificent 80 cm-high alabaster carving of a coat of arms. It was exhibited on a pedestal and was described as being of German-Austrian origin from the mid-16th century.

The alabaster carving, including the coat of arms, discovered by Patrick Damiaens in an art fair in Namur, Belgium

As heraldry is a great interest of Patrick’s, he studied it closely and remarked to the art dealer that he thought the piece was more likely to be English rather than German. He got the art dealer’s approval to take some photographs of the item to do some research on it.

Hercule Poirot tapped his forehead: “These little grey cells. It is ‘up to them.’” (Agatha Christie)

Back home, Patrick put on his Hercule Poirot hat, opened his computer, got out his books and magazines, and contacted a friend in England, Richard Lichten, who was also a heraldry enthusiast. His friend suggested that the coat of arms displayed the crest of the English family Throckmorton. However, the Throckmortons of England are an extensive family covering many years, so more detective work was necessary.

Patrick could tell by the style of the shield, the ornamentation and layout that it dated back to the 16th century. A key discovery was a martlet in the shield. This is a stylized depiction of a bird like a swallow. In heraldry, a martlet indicates the fourth son. Combined with the date, this narrowed down the coat of arms to that of Sir Nicholas Throckmorton (1515/1516 — 1571).

Patrick was shocked to discover that it was Sir Nicholas’ coat of arms, as he was a prominent English diplomat and politician. The fourth of eight children of Sir George Throckmorton of Coughton Court, Sir Nicholas was a close advisor to Elizabeth I, played an important role in the relationship between Elizabeth and Mary, Queen of Scots, and between 1559 and 1564 was Ambassador to France.

However, in 1569, Throckmorton was suspected of involvement in the conspiracy against the Duke of Norfolk and was locked up in Windsor Castle. Although he was not brought to trial, he never regained the Â trust of Queen Elizabeth I, and died in 1571.

If that had been the end of the story, Patrick had already made an important discovery, but there was a question that needed answering …

How did the coat of arms end up in Belgium?

In his research, Patrick found out that Sir Nicholas Throckmorton had been buried in St Katharine Cree church in London. In his memory, a monument was erected in the church. Patrick discovered a 1793 engraving that showed the Throckmorton monument in its complete state, including the coat of arms. 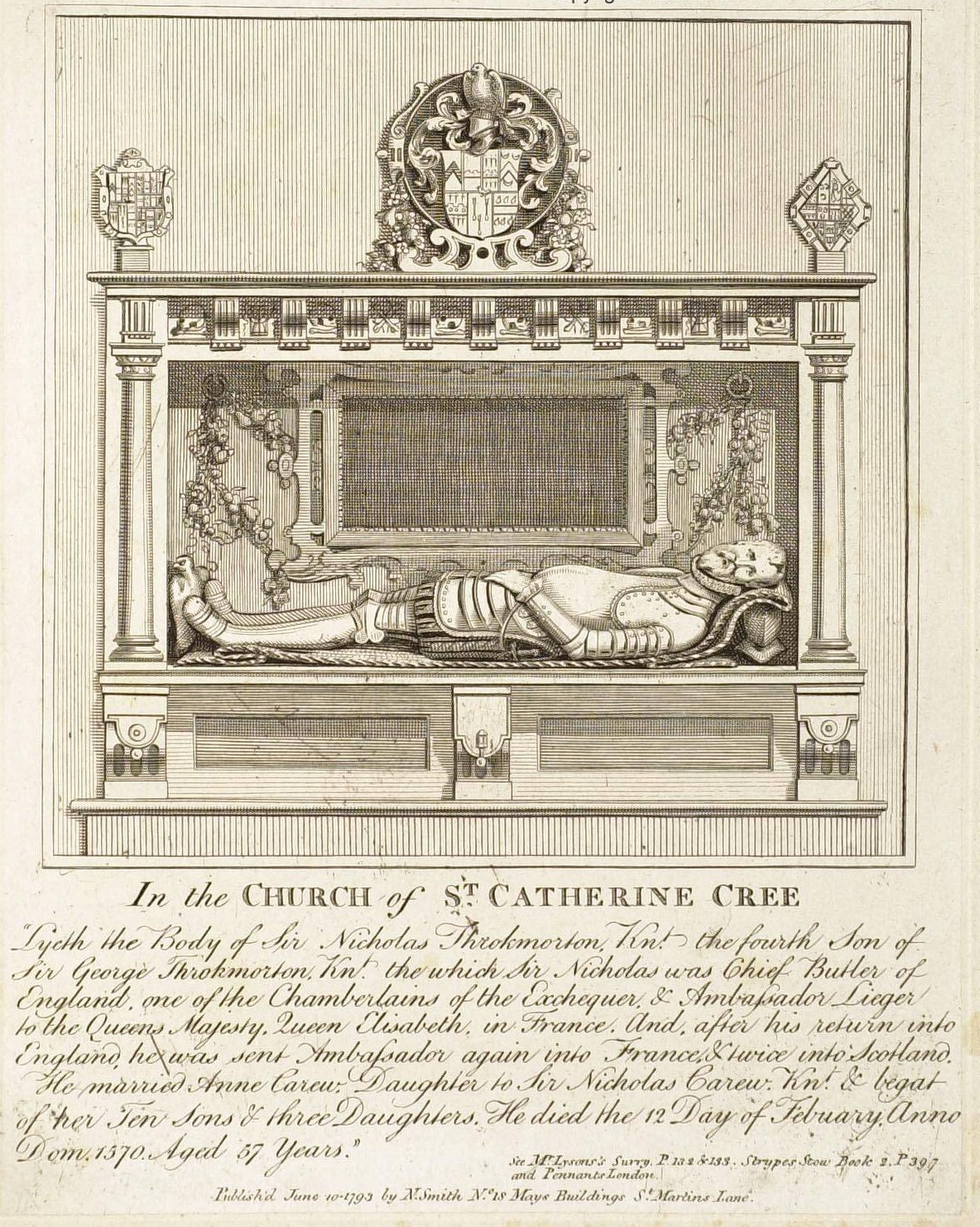 However, later photographs showed the monument without the Throckmorton coat of arms! This is clearly the situation now: 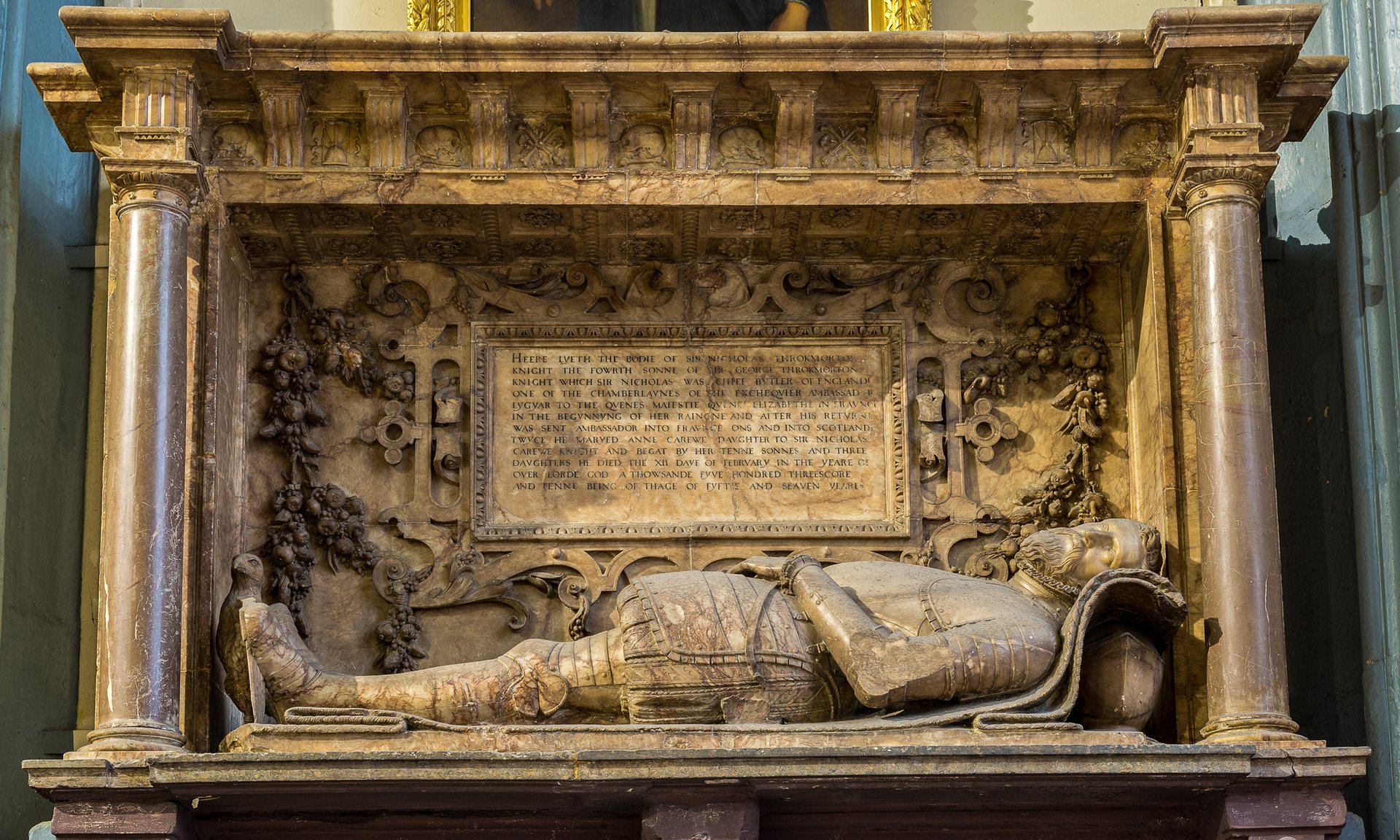 The Throckmorton monument in St Katherine Cree church in Leadenhall Street, in the City of London, but the alabaster carving is missing (photo courtesy of Phil Manning)

Patrick contacted the supervisor of St Katharine Cree church in London who confirmed that the Throckmorton coat of arms had disappeared from the monument some time after 1929, possibly during the Second World War to protect it from bomb damage, or shortly afterwards. He said that the piece of artwork could never legally have left the church because there was never a transfer deed. The most logical reason therefore was that it was looted art!

Patrick contacted a specialist at Christie’s London, who was impressed with Patrick’s research work and agreed that the coat of arms in Namur was the missing piece from the Throckmorton monument.

A legal process was then put into action involving the art buyer in Brussels and a lawyer from Art Recovery International, which specializes in the recovery of stolen, missing and disputed cultural property. Despite facing a financial loss, the art dealer agreed to return the piece to St Katharine Cree church.

The story was picked up by British newspaper The Guardian, although for some strange reason, Patrick’s detective work was relegated almost to the end of the article.

I hope that this blog post rightly puts the focus back on Patrick.

Without his initial discovery, his inquisitive mind, his painstaking research and his enthusiasm for the subject, this magnificent carving might never have been restored to its rightful position. 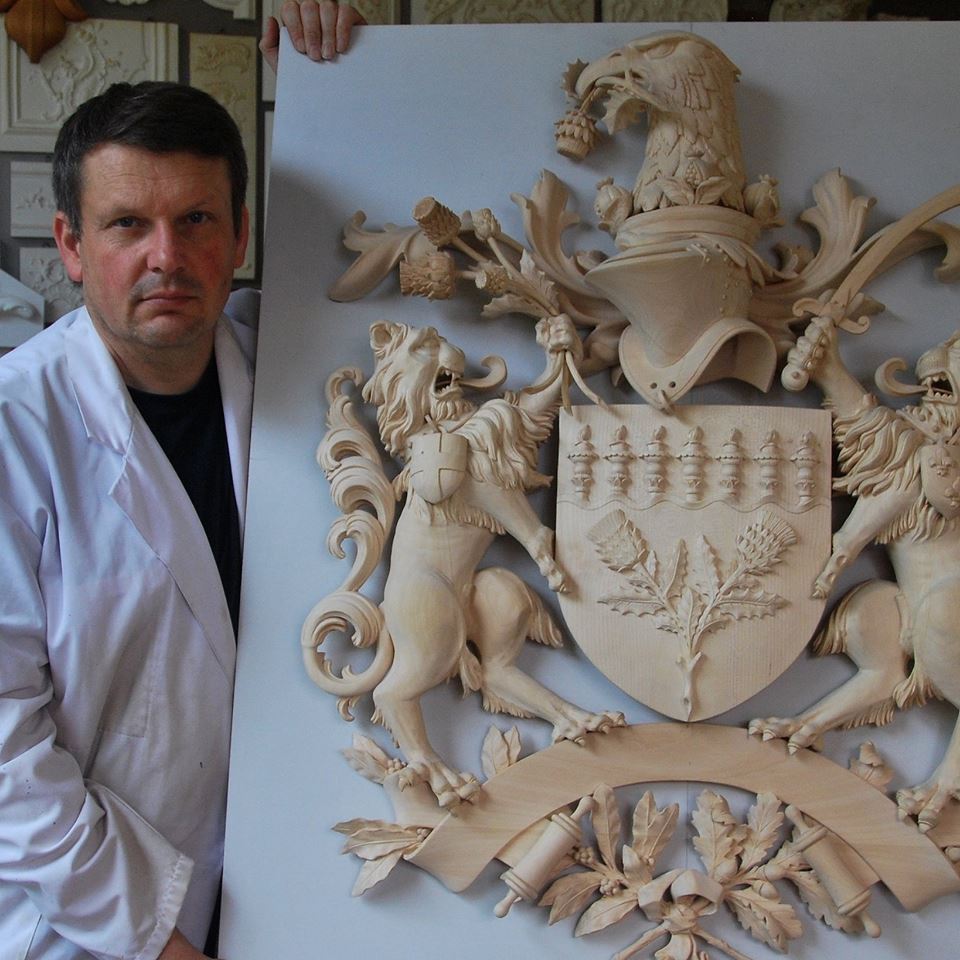 Patrick with a coat of arms that he has carved himself