The Procession of the Holy Blood in Bruges 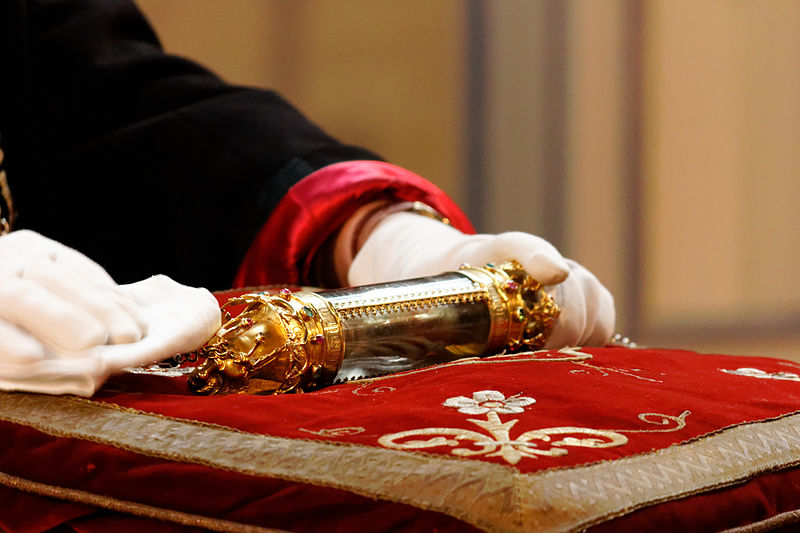 At the centre of the Procession of the Holy Blood in Bruges is a vial containing the blood of Christ.

Every year in Bruges, on Ascension Day, the Procession of the Holy Blood takes place in Bruges. It’s an event recognised by UNESCO as an Intangible Cultural Heritage of Humanity. In 2022, the procession will take place on Thursday 26th May from 2.30 pm onwards.

The centrepiece is a small vial containing a 2000-year-old cloth stained with the blood of Jesus Christ. But how did it end up in Bruges? And how can anyone be sure it’s Christ’s blood when its history is, to put it mildly, rather “cloudy”?

The history of the Procession of the Holy Blood in Bruges

Based on an article I wrote for a Belgian newspaper a few years ago, here’s an overview of the timeline of this event.

The body of Jesus Christ is taken down from the cross after the crucifixion. Joseph of Arimathea wipes the Saviour’s wounds with a cloth. Little did Joseph know how popular this bit of cloth was going to be. Unfortunately we don’t hear anything about it for over 1000 years, until …

Thierry of Alsace, Count of Flanders, arrives in Bruges from the Holy Land. In his possession is — yes, you’ve guessed right — a small fragment of Joseph’s original blood-stained cloth. Thierry received it from his brother-in-law, Baldwin III of Anjou, King of Jerusalem, as reward for his exceptional heroism. Thierry brings the relic to the Basilius chapel in Bruges. All goes quiet for nearly 100 years …

This is the date of the oldest document concerning a relic of the Holy Blood in Bruges.

The first procession of the Holy Blood is held in Bruges. It’s mentioned in the Charter of the Unloaders’ Guild. (The guys who unloaded boats, barges, carriages etc.).

As the relic is regarded as property of the city, the procession becomes a civic event. The guilds of Bruges are obliged to participate, as well as artisans, commoners, city councillors and clergy all marching and merrymaking with the relic around the city walls.

Bruges city council combines the two weeks of festivities around the Holy Blood with the city’s month-long Annual Fair, thus immediately swelling the popularity of the event.

Relics need protecting, and who could do it better than the newly formed “Noble Brotherhood of the Holy Blood”? Its 31 members must be resident in Bruges and be “honourable people”. The Brothers wear a black silken tabard on which is embroidered a pelican feeding her young with her own blood. The pelican is a symbol of Christ. (Don’t ask!).

A processional route around the city is agreed, which is still used today. The procession’s Biblical scenes are sexed up with profane scenes, giants, and the mythical Bayard Horse.

Oops. Bruges goes all Calvinistic. The procession is banned. The relic is taken to a safe place.

The relic is dug out of some old cupboard, dusted down, and the procession re-commences with even greater splendour.

The Holy Blood needs a better container, so one is specially made. It’s set with hundreds of precious stones, including the Black Diamond from Mary Stuart, Queen of Scotland. It’s still used today.

Sacrebleu! The French rule Bruges. The procession is temporarily abolished and the relic gets put back in the cupboard until the French depart.

A whole plethora of changes in the themes and the presentations are introduced. The event increases in international popularity. And profitability.

Martin McDonagh’s hit movie “In Bruges” draws attention to the Holy Blood relic. Holed up in the city, two hit men familiarise themselves with local customs and sights. In one amusing scene, they visit the Basilica of the Holy Blood.

The Procession of the Holy Blood in Bruges is added to the UNESCO list of the Intangible Cultural Heritage of Humanity.

The Noble Brotherhood of the Holy Blood still lead the procession. The honorable brothers are accompanied by brass bands, hundreds of tableaux and floats, and over 1,700 citizens re-enacting stories in three parts.

The first consists of scenes from the Old and New Testaments; the second shows the 1150 return of Thierry of Alsace to Bruges; the third is the procession of the Holy Blood relic itself.

Thousands of people will attend the event, along with dignitaries from Church and State. The procession concludes with prayers in several languages. The relic is then enshrined once more in the Basilica of the Holy Blood where it is displayed each Friday, before and after the mass.

If you’re going to the next procession of the holy blood in Bruges, enjoy your day. Seats are usually sold out quickly but there’s standing room along the route, if you don’t mind a crowd.

24 thoughts on “The Procession of the Holy Blood in Bruges”