When Her Majesty Queen Elizabeth II came to Belgium 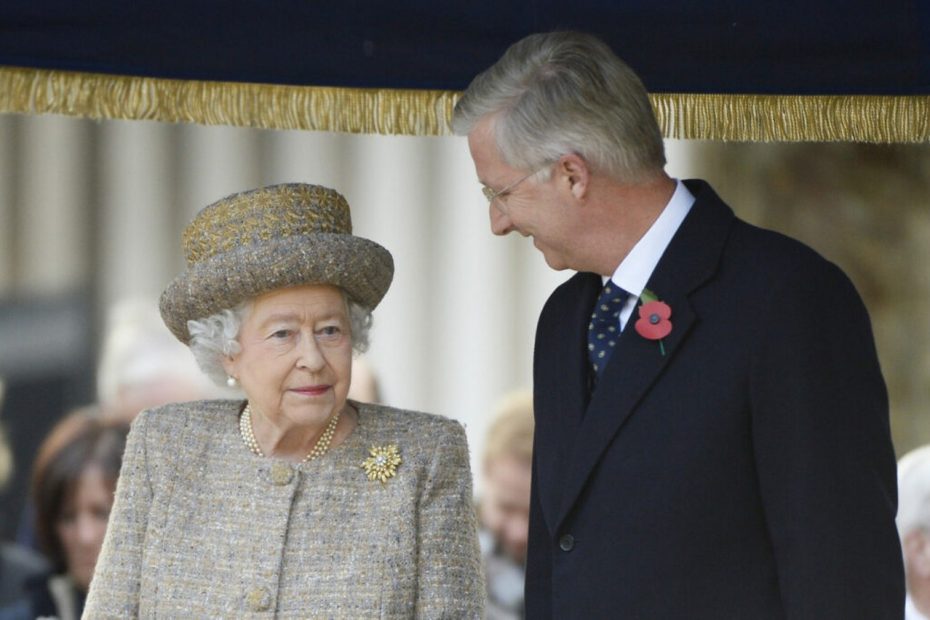 The first appearance of Queen Elizabeth II on Belgian soil occurred on 9 May 1966. Accompanied by Prince Philip, Duke of Edinburgh, the Queen was welcomed at Zaventem airport by King Baudouin, Queen Fabiola, Prince Albert of Liège and Princess Paola.

On her first day in Belgium, the Queen paraded through the streets of Brussels in a convertible car, to the delight of the crowd that had gathered along the route. The Royal couple visited the Grand-Place, where she was welcomed by Julien Cooremans, Mayor of Brussels. The welcoming ceremony included a spectular display by the Brotherhoods of the Ommegang, which the Queen admired from the balcony of the Town Hall. The Queen also visited the Congress Column, to lay a wreath at the Tomb of the Unknown Soldier.

The next day, Queen Elizabeth II and Prince Philip traveled to the port of Antwerp. They laid a wreath at the foot of a British Cromwell tank. Prince Philip enjoyed a helicopter tour, while the Queen visited the Plantin-Mauretus museum. The royal couple also enjoyed a short cruise on the River Scheldt.

The next day saw the royal couple greeting residents of Liège. The Duke of Edinburgh was shown round the arms museum in the company of Prince Albert, while Queen Elizabeth II was invited by Princess Paola to the Palais des Congrès. The royal couple then met at the Prince-Bishops’ Palace, where they were greeted by 3,000 schoolchildren singing “It’s A Long Way To Tipperary”.

For their second visit to Belgium, the Queen and Prince Philip were welcomed to Laeken Castle by King Baudouin. Queen Elizabeth II spoke a few words, referring to the warm welcome she had received 14 years earlier and the ties that unite these two countries. The Queen visited the European Economic Commission and the Brussels headquarters of NATO. Here she quoted Paul-Henri Spaak on the principles of defence and deterrence advocated by NATO. This was an appreciated nod to the Belgian who held positions of Prime Minister and Secretary General of NATO. At the end of their stay, the royal couple attended a ballet performance of Ravel’s Boléro, produced by Maurice Béjart, at the Théâtre de la Monnaie.

Queen Elizabeth’s third visit to Belgium started with lunch at the Château de Laeken with King Baudouin. The sovereigns then traveled to Waterloo to visit the battlefield where Napoleon was defeated on June 18, 1815.

Little did Queen Elizabeth know, but in just two months she would be unexpectedly returning to Belgium in much sadder circumstances.

After reigning for 42 years, King Baudouin died of heart failure on 31 July 1993 in the south of Spain. The country was shocked and his death sent Belgium into a period of deep mourning. On August 7, Queen Elizabeth II and Prince Philip were present at the funeral mass at the Saint-Michel-et-Gudule cathedral to pay their last respects to King Baudouin. Queen Elizabeth’s presence at the King’s funeral was exceptional, as she did not usually travel to funerals abroad. It was a clear demonstration of the warm feelings and good relations between the two monarchs and countries.

On the occasion of the 80th anniversary of the Armistice, Queen Elizabeth II traveled to Messines alongside Mary McAleese, the Irish President. It was a touching moment to remember a battle where Irish Catholics and Protestants fought side by side against a common enemy. Elizabeth II, accompanied by King Albert II and Queen Paola, then proceeded to the Menin Gate in Ypres.

At the age of 81, the Queen of England made her last visit to Belgium. They were welcomed to Belgium by Prince Philippe and Princess Mathilde. The four members of royalty traveled to Wavre where they visited the British pharmaceutical company GlaxoSmithKline (GSK). They discussed health in developing countries, women’s health, as well as the flu virus and malaria. Elizabeth II and Prince Philip were then invited to Laeken Castle by King Albert II and Queen Fabiola for lunch.

Their day ended with two commemoration ceremonies. The first in Ypres, at the Menin Gate, as was the case in 1998.

“I remember her as a kind and friendly person. She was also very professional and well-informed. She was perfectly aware of what we are doing for her people here via the Last Post. She was also a typical British person, with a sense of humor.”

At Tyne Cot military cemetery the royal couple attended an ecumenical ceremony to commemorate the 90th anniversary of the Battle of Paschendaele.

These two events are therefore the last that Queen Elizabeth II attended on Belgian soil.